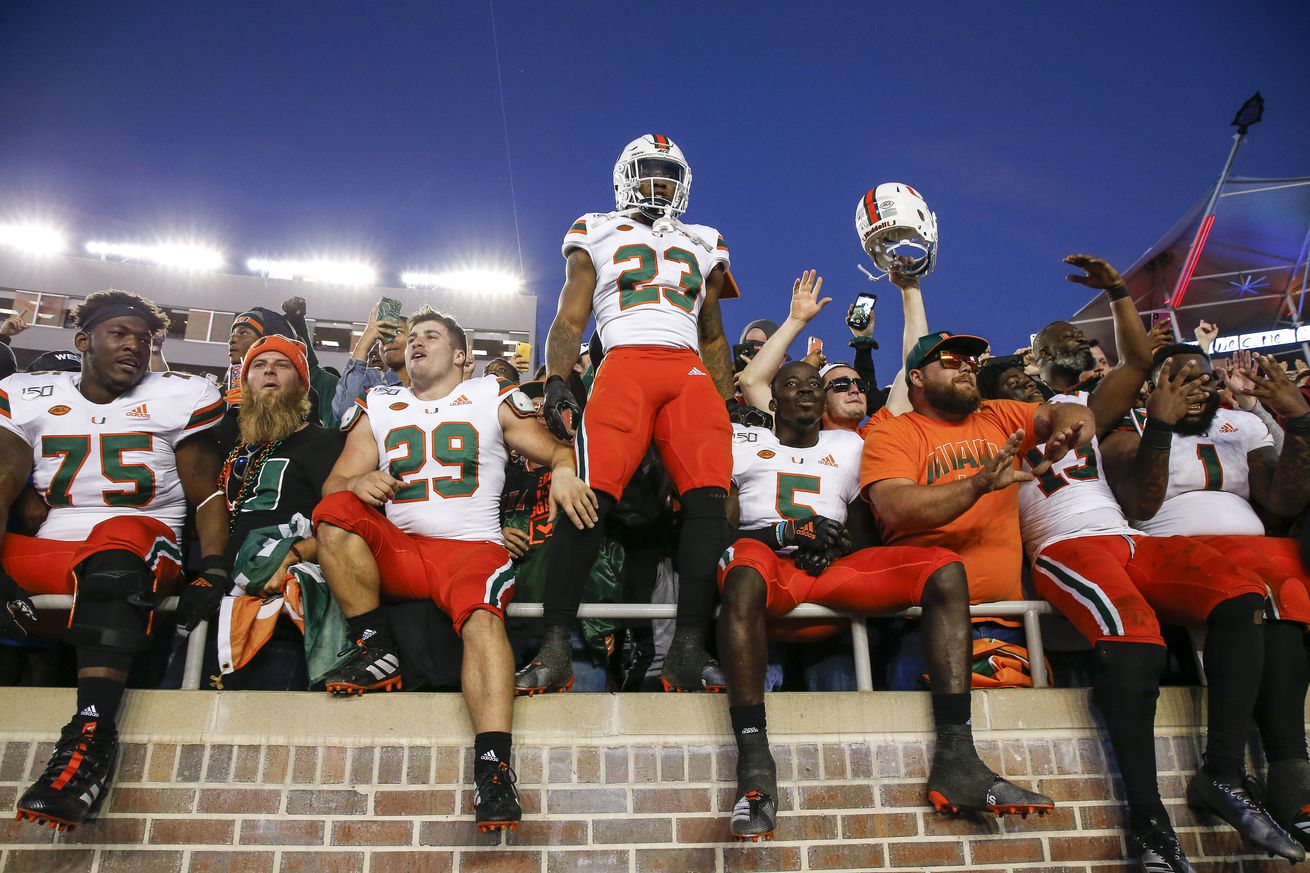 The Miami Hurricanes will be taking on the Florida State Seminoles this Saturday in rivalry showdown. Here are 10 over/under picks for the battle.

I’ll be taking the over on everything this week. It’s FSU week people. After the Miami Hurricanes’ (2-0, 1-0 ACC) impressive ACC opener against the Louisville Cardinals, the Canes will be taking on the Florida State Seminoles (0-1) in another primetime ABC matchup. Saturday night’s offensive outburst was everything Maimi fans hoped for. With a retooled offense and a true leader in D’Eriq King, the Hurricanes will look to make it four-in-a-row against the Noles.

Against the Seminoles’ defense, Georgia Tech Yellow Jackets’ QB Jeff Sims was 23 of 34, for 277 yards, and 1 TD. Sims also threw 2 INTs into the waiting arms of Asante Samuel Jr. With two weeks to prepare, I expect the Noles to put a primary focus on trying to stop King with various pressures. Especially, after his 325-yard and 3 TD performance through the air on Saturday. Rhett Lashlee and King both unleashed the offense in primetime last week. They’ll look to do the same this Saturday night.

For the second week in a row, Cam’Ron Harris ran wild. Granted, a good chunk of his 134 yards on the ground came from an exciting 75-yard touchdown run in the third quarter. However, he has shown game-changing and playmaking ability in both games as the lead back. Sims was the predominant runner in Georgia Tech’s matchup with FSU. He had 64 yards on the ground. Starting tailback Jordan Mason finished with 55 yards and 1 TD. Harris is averaging a staggering 10.3 yards a rush through two games. I doubt the show stops in such an intense matchup.

Through two games, Canes fans have seen both Jaylan Knighton and Donald Chaney Jr. used in various ways. They combined for 111 yards rushing against the UAB Blazers and two TDs (Knighton rushing and receiving) against the Cardinals. The total would’ve been higher if Chaney continued his route in a long pass attempt from King down the left sideline. Whether on the ground or through the air, the Canes will look to get these young backs involved.

Another week, and another game where Brevin Jordan shows why he’s the best TE in the country. The first-team All-ACC tight end finished the Louisville game with 7 catches, for 120 yards, 1 TD, and an impressive hurdle. Jordan has gone over 50 yards receiving in both games this year. His numbers are reflective of Lashlee’s scheme, Jordan’s utility in the offense, and his talent. Last season against FSU, Jordan had 6 catches for 48 yards. What are his chances of going over 75 yards in this one?

Miami is ranked 5th (6.9) in the country in terms of yards-per-play. The Canes finished with 6 explosive plays last week (Knighton, Mark Pope, Brevin Jordan, Cam’Ron Harris (2), and Mike Harley). In their contest against Georgia Tech, the Seminoles only surrendered 3 explosive plays. Whether it was Tech’s multiple drives ending in turnovers or the defensive scheme, the dink-and-dunk element was alive and well in Tallahassee. Miami can’t expect the same blown coverages that they saw last weekend. But, they can sure hope for them.

According to this week’s depth chart, the Hurricanes will be facing off against James Blackman this week. The redshirt junior struggled against the Yellow Jackets. He passed for 198 yards on a questionable 43 attempts. Florida State’s rushing attack fared no better against GT. The team combined for 109 yards rushing. The longest rushing attempt was for just 16 yards on a scramble by Blackman. The extra week for the Noles was surely spent on trying to get the offense in sync. We’ll see how successful they were in their attempt this Saturday night.

The Canes have a total of 4 sacks in the 2020-2021 season. The highest number, came against the Cards (3). Bradley Jennings Jr., Jared Harrison-Hunte, and Zach McCloud all got to Malik Cunningham. Georgia Tech has similar success against FSU. They (Curtis Ryans (2) and David Curry) took down Blackman three times in their matchup. With fierce pass rushers like Qunicy Roche and Jaelan Phillips, the Canes’ front seven will look to continue their surge against the Noles.

In the last three games that James Blackman has played against the Canes, he’s thrown an interception. Another fact, James Blackman has never beaten the Miami Hurricanes. Ok, that stat has no relevance in the segment but, it had to be said. Against Georgia Tech, Blackman threw a costly pick to Quez Jackson. Al Blades Jr. and the rest of the secondary will be looking to pluck the ball from the air two weeks in a row in primetime.

The turnover chain came out three times last week and, it was worth the wait. The chain features more than 2,500 sapphires including 1,900 white sapphires, 700 green sapphires, and 700 orange. Amari Carter, Zach McCloud, and Al Blades Jr. all had their chance to rock the massive Cuban link beauty. With Florida State’s habit for turnovers (3 against Georgia Tech) and Blackman’s when facing the Canes (4 turnovers in career vs. UM), the chain will definitely make an appearance this weekend.

As we all know, battles like this are always chaotic. The teams know each other so well and the passion will be at an all-time high. Do you think Miami is mentally settled enough to not let early-season success get to them? Or, since it’s a rival, is it impossible to mentally overlook FSU?