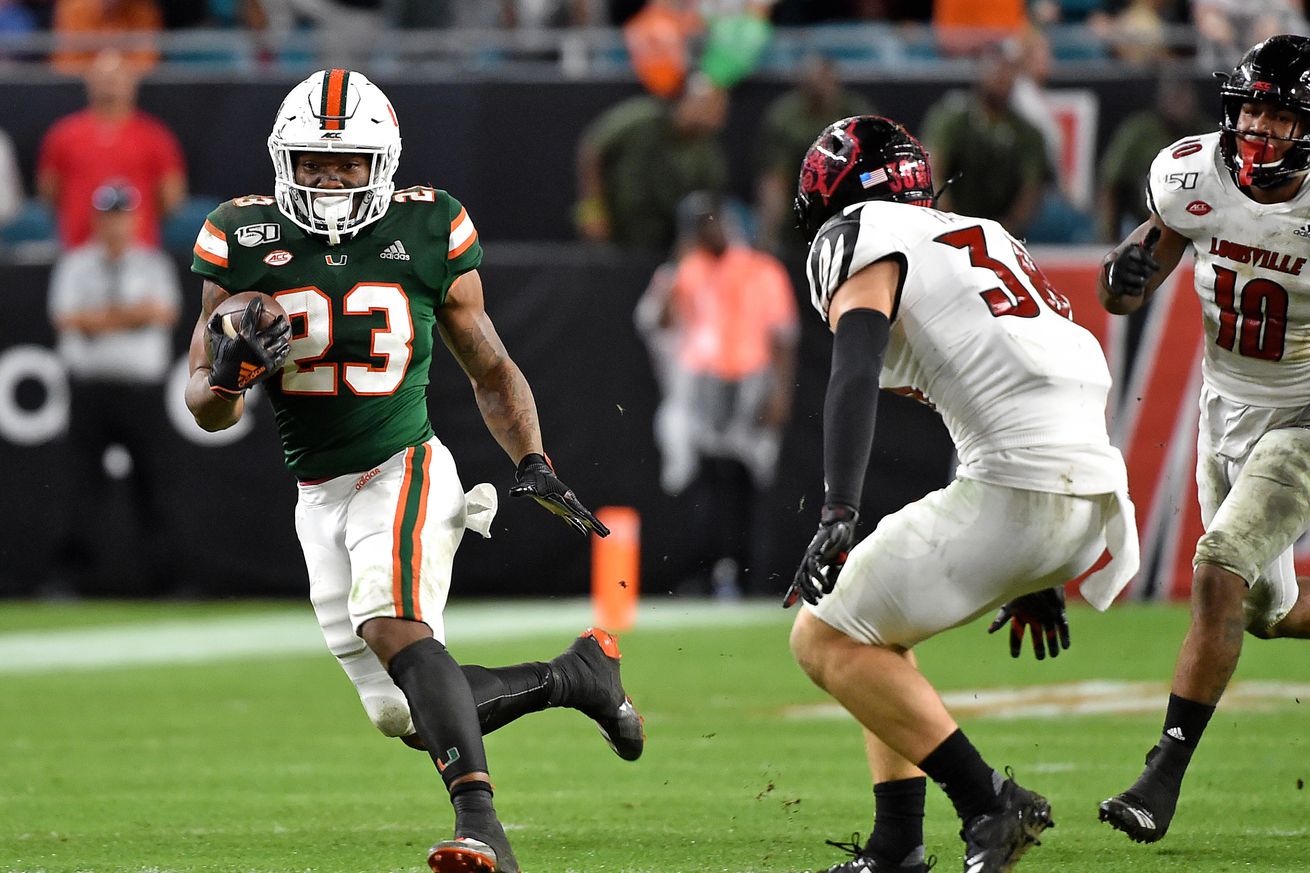 The Miami Hurricanes take on the Louisville Cardinals this Saturday night in a primetime ACC matchup. Let’s run down 10 over/under picks for the matchup.

I think we all took the over on rushing yards last weekend but, nobody was prepared for those numbers on the ground. Last week, the No. 17 Miami Hurricanes defeated this UAB Blazers by the score of 31-14. The offense left plenty of yards and plays out on the field. However, a near 500-yard total offensive performance can only provide momentum for the season. This weekend, the test will be greater and the audience will be wider. The Canes will be taking on the No.18 Louisville Cardinals in a Saturday night and ACC showdown on ABC. D’Eriq King, Cam’Ron Harris, Brevin Jordan, Al Blades Jr., Quincy Roche, and company will be taking on an exciting Micale Cunningham lead offense. Fresh off their win against the Western Kentucky Hilltoppers, the Cards will rely on their bevy of playmakers to show up in battle. Confidence will be high after both teams won their opening matchups.

D’Eriq King passed for 144 yards, went 16 of 24 in attempts, and passed for 1 TD. Finishing with a 82.4 QBR and a 6-yard average through the air, the Houston Cougars transfer also extended his NCAA records for consecutive games with a rushing and passing TD (16). Western Kentucky’s Tyrrell Pigrome struggled to light up the Cards secondary last week. He passed for 129 yards and was 10 or 23 on pass attempts. However, Pigrome rushed for 68 yards on 17 attempts. King’s versatility should press the Cards defense similarly on the ground on Saturday night.

Cam’Ron Harris had an impressive coming out party last weekend. The junior running back ran for 134 yards on 17 attempts. His longest run, a dynamic house call for 66 yards on 4th and 1, was his signature plays of the night. Harris returned to practice this week, and is in-line to play this Saturday. Louisville did a good job of keeping Western Kentucky’s running backs in check. They had combined for only 51 yards on the ground and with just 18 attempts. The 18 attempts were 1 more than Cunningham’s (17).

There was a point last week where I couldn’t remember the last time we ran the ball. With our playmaking quarterback and running backs in the fold, the Canes ran the ball 52 times. Cam’Ron Harris, Jaylan Knighton, and Donald Chaney Jr. put on a show. Do you think the run-heavy trend continues?

Although the running game was the main entree for the Canes’ offensive attack, it was great to see Brevin Jordan back in the endzone where he belongs. The talented and touted tight end finished with 3 catches, for 51 yards, and 1 TD. Western Kentucky didn’t attempt a pass to the tight end last week. There’s no reality where that trend continues for the Cards defense this week.

I’ve seen enough DJ Ivey tweets this week to know that the Canes cornerbacks were a major topic of conversation. Also, the group will be down one player with the departure of Christian Williams. The core will be put to the test this week when Micale Cunningham takes the field. Cunningham passed for 343 yards, was 19 of 34, threw for 3 TDs, and had 1 INT. His ability to escape and create showed up several times against Western Kentucky. Louisville also had two wide receivers go over 100 yards last week (Dez Fitzpatrick and Braden Smith). Shifty WR Tutu Atwell wasn’t that far behind with 78 yards. Led by Al Blades Jr. and a good trio of safeties, the secondary will look to extinguish this Cards offense.

The Canes held UAB to 80 yards rushing last week. There were times when Spencer Brown pressed the front seven, but his rush total was a good way to start the season. Louisville did most of their damage through the air last week. Their starting tailback, Javian Hawkins, ran for 71 yards on 19 attempts. He also scored one TD on the ground. Hassan Hall also had a solid night totaling in 66 yards rushing. The front seven will have to play assignment football all night with Cunningham’s ability to cut loose and take off at any moment.

The defensive line was as advertised last week. The team had just one sack but finished the game with 6 quarterback hurries and 6 tackles for loss. The pressure around Tyler Johnston III showed up all game. Last week, Western Kentucky had 1 sack as well. The Cards did a solid job against DeAngelo Malone & Juwuan Jones. They’ll have another test on their hands with Quincy Roche and Jaelan Phillips.

The Hurricanes did not come up with a pick last week. On Saturday, they’ll face a team that puts the ball in the air a lot. Western Kentucky was able to get their hands on one of Cunnigham’s pass last week. The surplus in opportunity may lead to Miami’s first INT the season.

The turnover chained remained in the box last week against UAB. We almost had a turnover of our own when Mark Pope fumbled a punt early in the game. Last week, the Cards had two fumbles (1 lost) and Cunningham threw a pick. In a primetime matchup like Saturday’s, there’s always a big turnover lurking in the wind.

The Canes scored 31 points last week through their commitment to the ground game and a stifling defense to close out. Louisville gave up 21 points to the Hilltoppers last week. Every Miami hopes the offense will push for more explosive plays as the season progresses. If this is the week the passing and run game begins to align, the scoreboard will light up.

How do you feel heading into this prime top-25 matchup? Do you think we struggle to contain Louisville’s playmakers? Does Louisville stand a chance against our D-line?