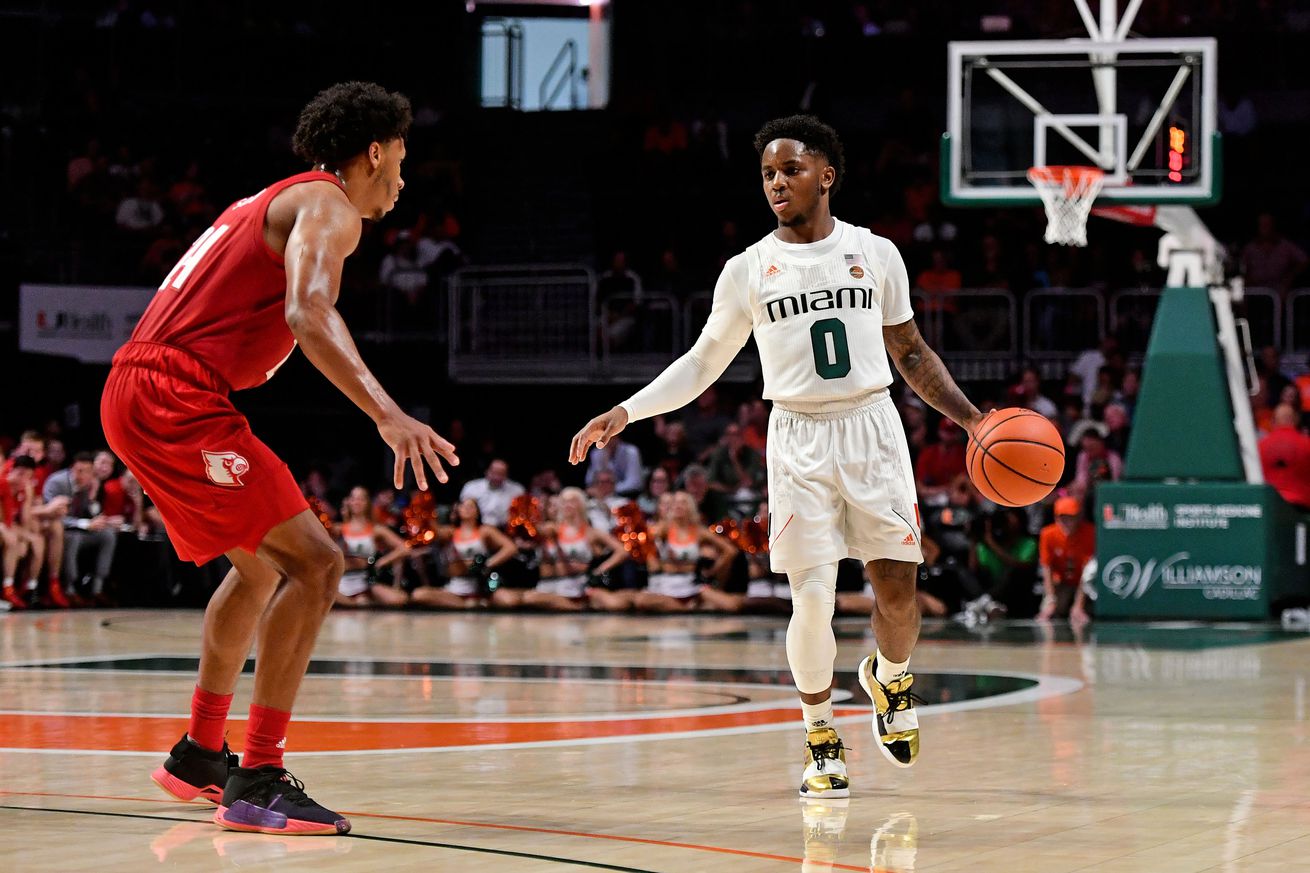 After another season of coach Larrañaga’s Hurricanes going unranked and losing in the second round of the ACC Tournament, the program is equipped with added talent and depth to potentially storm the conference and return to the NCAA Tournament.

The Miami Hurricanes men’s basketball program has been working tirelessly to prepare for what could be a very different college basketball season ahead, as the NCAA continues to endure the impacts of the COVID-19 pandemic.

“I’m very proud of our guys for the way they’ve handled it so far,” Miami head coach Jim Larrañaga said. The skipper originally from the Bronx, N.Y., has reaffirmed that the team maintains operations in the safest way possible at the Watsco Center’s practice facility.

“We’ve almost been in our own bubble. Our practice facility’s been limited to our players, our coaches, and a couple of managers, and that’s it. It’s a very dangerous virus [and] our players have been very, very smart in dealing with it so far,” said Larrañaga, who will be coaching his 10th season in Coral Gables, Fla., this winter.

Larrañaga added that the frequency of team testing has increased as an extra precaution with the season approaching.

“At one time it was once a week and now it’s twice a week. So, as long as we’re smart about who we interact with when we’re not at practice, I think we can stay safe,” Larrañaga said. The 71-year-old coach has also lost a former player and friend because of the coronavirus.

But despite the prevention of the coronavirus’ impacts, the Hurricanes look to rebound after a rollercoaster season that ended with a second-round loss to the Clemson Tigers in the ACC Tournament.

“I would say as long as we stay healthy, we should be in much better shape than we have been in the last two seasons,” Larrañaga said.

“It’s a big blow to us to lose Sam,” Larrañaga said. “He was our most experienced frontcourt player [and] our leading rebounder from last season. He was practicing extremely well, and we’re going to dramatically miss his defense, his rebounding, his experience, and just his overall demeanor on the court.”

Larrañaga stated that sophomore forward Anthony Walker, Cross, and redshirt junior forward Deng Gak would have had to compete with the now-injured New Zealand native for the starting power forward slot. That now remains open given Waardenburg’s absence, though Larrañaga remains optimistic with the available talent.

“I’m pleased with the way Anthony was practicing, the way Matt has practiced and what he brings to the table,” Larrañaga said. “It’s very nice having Deng Gak back, because Deng can play both the four and the five.”

Gak, who could have helped bolster Miami’s frontcourt last year, has also been sidelined the past two seasons with both left and right knee injuries. It was initially believed that the Sydney, Australia, native would receive a medical waiver since he had only played in less than 30 percent of games per year.

Redshirt senior center Rodney Miller has been improving offensively through the offseason, as his veteran leadership will remain vital this year.

“I’ve really worked on mastering my left and right-hand jump hook,” Miller said. “I can do both really smoothly either hand, so I think you’re gonna see a lot more of that. I’ve been working on my free throws [and] my mid-range game just to expand a little bit and give them [opponents] some space.”

After being the team’s lone center last year, Miller believes that the Canes having extra players at hand will help them more in the long run.

“I feel like that’s been a question that we’ve had for the past couple years I’ve been here because we’ve plagued with injuries and eligibility issues,” Miller said. “We have a stockpile of guys and it’s gonna be huge for us. We’ve realized that depth is what helps teams make it far because it just lowers injuries if you can rotate capable guys who are ready to play, and that’s what we have.”

The addition of Brooks will aid Miami’s big men in Miller and Gak with defending and rebounding, as the Canes were second-to-last in scoring defense allowing 73.2 points per game.

“I know we’ll be real good at being able to adjust to different kinds of teams that different play styles,” Brooks said. “We’ll be good to adjust in any type of game situation with the players that we have with the young freshmen coming in and some of the older players that still will be here.”

Miami saw senior guards Chris Lykes and Kameron McGusty sidelined with injuries at various points in the season. But now the two are prepared to help lead the program against the ACC’s toughest competition.

“I think we’ve got a lot of talented guys that can play a number of different positions,” Lykes said. “We’ve been working on a couple of different things, so the offense might be a little different, but it’s really just going to take some time just for us to gel together.”

McGusty, a former Oklahoma transfer, has worked on his body this offseason from a nutritional and conditioning standpoint as this will likely aid in more efficient performance on both ends of the court.

“I really took my body serious, changed my diet a little bit, [and] started taking my off-court conditioning a little more importantly,” McGusty said. “If I want to play good on both sides of the ball you gotta be in the right shape. Those are some of the things I wanted to do last year but I just realized I wasn’t in enough shape. That’s honestly the truthful answer, so that’s one of the things I worked on this offseason and I’m looking forward to put it altogether and get on the court and show it.”

Lykes averaged over 15 points per game last season, shouldering the scoring load for the second consecutive season. McGusty, on the other hand, initially joined his backcourt teammate in doing the same until sophomore guard Isaiah Wong broke out and impressed the coaching staff in the second half of the season.

For Wong, it was a literal tale of two halves while only averaging 3.1 points, 1.7 rebounds, and 0.6 assists in the first 18 games last season. The final 13 matchups, however, saw the Piscataway, N.J., native increase those numbers to 14.2 points, 4.7 rebounds, and 1.6 assists per game, while shooting 47.6 percent.

“I felt like I always had this in me,” Wong said. “It was just recognizing it and getting my confidence up.”

Whether Larrañaga starts or brings Wong off the bench, performances similar to his first college start in Chapel Hill, N.C., will be critical for the Canes.

“He always had that potential; he just had to gain some experience,” Larrañaga said. “The mental part of the game, learning a new offense, learning your responsibilities defensively, those were the more difficult things for Isaiah. Just a lot of adjustments that just took time [for him] to overcome.”

Wong, who has gained about 20 pounds of muscle, worked hard in the weight room during the offseason with the team’s strength and conditioning coach Phil Baier. That investment has paid dividends on the hardwood, and Larrañaga had not failed to take notice.

“He is considerably bigger and stronger,” Larrañaga said. “He’s practicing very well; he’s played both the one and two and he’s playing both positions with a great deal of confidence. He’s shooting the three with a lot of confidence and I would say he’s significantly improved from last year in that category.”

The program’s freshmen in Cross and Timberlake will provide an additional amount of fresh energy in terms of scoring and rebounding. Both will be able to fit in to the team’s rotation, regardless of whether Larrañaga’s game plan has the Canes with a smaller or larger five on the court.

“Earl has practiced very hard and very well,” Larrañaga said. “He’s a tremendous competitor. He brings an entirely different set of athletic skills and basketball skills. He’s more physically ready than most freshman in a sense that he’s 6-foot-5, he’s strong, athletic, and he can handle [the ball]. Whether Earl starts or comes in off the bench, he’s going to be a major contributor from day one.”

Even Larrañaga cited how Timberlake’s rebounding abilities will benefit the team, a major team weakness to better from last year.

“He’s been rebounding the ball very well at both ends,” Larrañaga said. “Losing our best rebounder in Sam Waardenburg, all of the sudden the coaching staff is very, very focused on ‘Who can play that position and give us the best chance of defending and rebounding at that position?’ We keep stats in practice, and he’s one of our leading rebounders in practice. He’s also someone defensively that would allow us to switch one through four, and we’re hoping that would help us improve our defense versus ball screens.”

In terms of defense, Lykes said that “it will be a different team defensively and better, too.” He and McGusty strove have strove to set the tone on that end of the floor by improving their defensive game.

“I think we have solid rim protection in both Rod, Deng and Nysier Brooks, who was Defensive Player of the Year at Cincinnati,” Lykes said. “I think we also got guys that guard a number of different positions. One of the focal points that we’ve picking up on in practice is picking up full court. I think we have the agility and speed to do that.”

Among the ACC, the Canes finished last in defensive rebounding, averaging only 38.5 rebounds per game due to the lack of size and strength in the paint. This will remain a critical category to improve upon besides obtaining more balanced scoring.

After also ranking ninth last year in the conference with a scoring average of 71.2 points per game, Miami hopes that their newcomers can effectively contribute and take pressure off of Lykes and McGusty. The team’s offense remained stagnant at times, leading to more opportunities for blue-blood programs including Duke and Louisville to force contested shots.

With two consecutive seasons of NCAA Tournament absences, the Miami Hurricanes will begin the season with a sense of redemption to contend for a potentially higher ACC ranking and a deeper run in the ACC Tournament, let alone March Madness itself. The only game that currently lies on their schedule remains the ACC/Big Ten Challenge at home against Purdue on Dec. 8. An official schedule is likely to be released within the coming weeks.