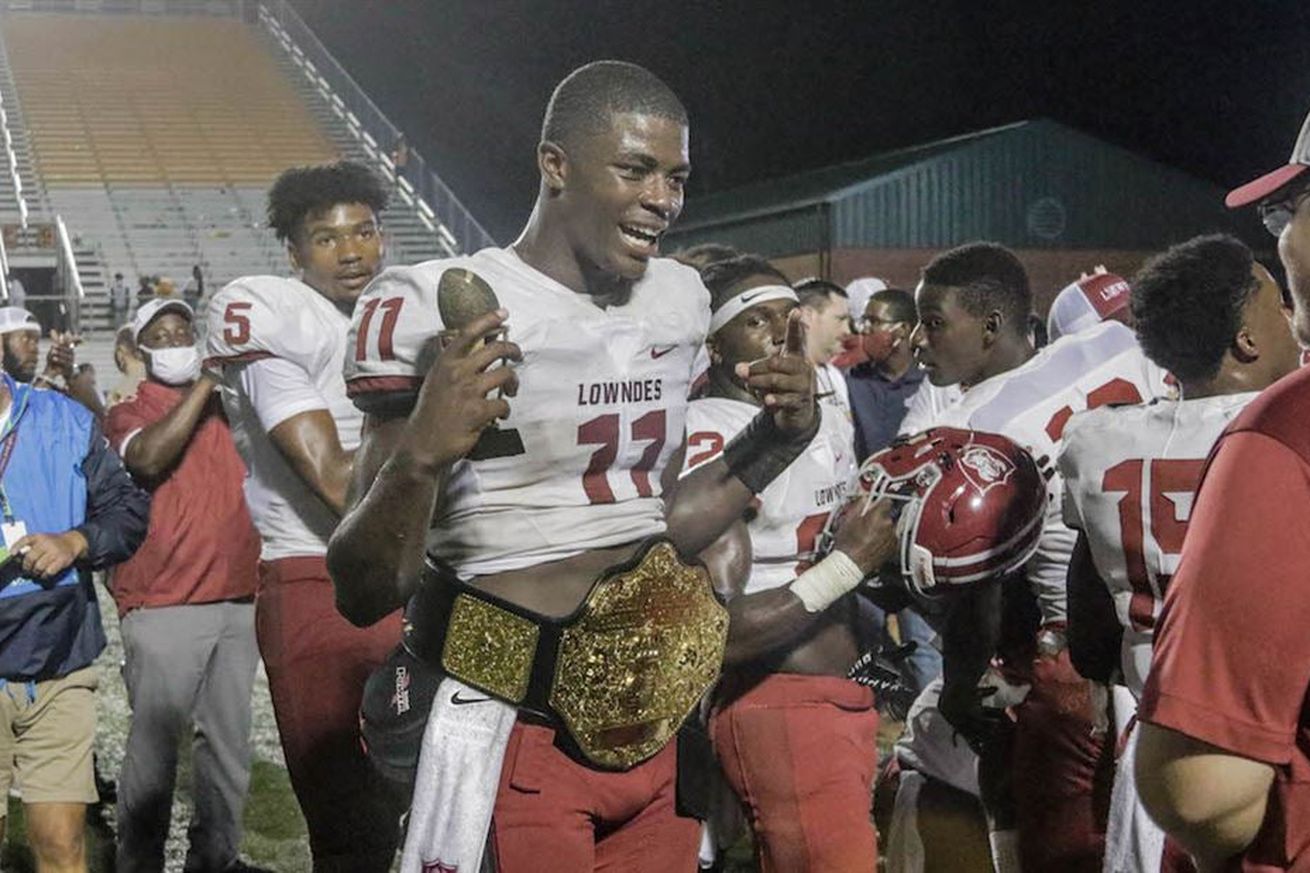 Georgia is known for producing great quarterbacks, and Jacurri Brown is fitting into that category.

With the 2021 recruiting cycle coming to an end in several months, it’s always good to look ahead to the next class, and there’s no more important position to look at than quarterback. Over the next few weeks, I’ll be doing little intro pieces on different 2022 QB’s, a class that is stacked at that position.

I’ve talked about two quarterbacks so far, and today we’re going to look at one of my favorite QB’s in this 2022 class, 4-star Jacurri Brown out of Valdosta, Georgia (Lowndes High School).

Brown has been one of the more talked about QB’s in the 2022 cycle, and whose stock will just continue to rise his last two years in high school. Miami offered Brown in May of this year, and told 247 Sports in September that UM was one of the schools he was talking to frequently.

Last season, Brown threw for 1,340 yards and 10 touchdowns, and then on the ground, he totaled 1,561 rushing yards and 20 touchdowns. Playing in Georgia’s largest class for high school football, he led his team to the state championship game.

Can 4⭐ Jacurri Brown take Lowndes to the next level?
.
.
.#football #highschool #quarterback pic.twitter.com/FzSvj4Brch

So far in 2020, Brown is picking up right where he left off, as he has Lowndes ranked as the top team in Georgia, and some have them in the top-10 nationally. Last week, Brown threw for 101 yards and 2 touchdowns, and rushed for 175 yards and 2 touchdowns in a 33-21 win over their crosstown rivals, a game that was televised on ESPN2.

In the first games of this season, Brown had nearly 1,110 yards of total offense by himself, to go along with his 15 touchdowns.

Brown is on the #Gators radar in the class of 2022. @LHSvikingsFB pic.twitter.com/ItAN7YnWhn

Now I know a lot of Canes fans are wanting to keep this offense centered around a dual-threat quarterback, and in that case, Brown is your guy. When running with the football, Brown is one of the most exciting players to watch, and his 4.6 40-yard dash time sets him apart from other mobile quarterbacks. So not only does he have the speed of someone like D’Eriq King, he also has 6-4 height.

Big offer here for Jacurri Brown. The Lowndes High QB led his team to the Class 7A state finals in Georgia last fall as a sophomore. The dual-threat QB has improved a great deal as a passer over the last nine months. https://t.co/dRoIUh7US0

However, there’s still some polishing that needs to done when it comes to Brown as a passer, as he’s working on becoming more accurate. Something that will help, Lowndes brought in a new head coach this season, who runs more of a track-meet and spread offense look, as opposed to a run-heavy scheme, which Brown and his team ran last year. In Rhett Lashlee’s spread offense, he wants a crisp quarterback throwing the football, more so than he wants someone who can just scramble. So if Brown can continue working and improving, he’ll be one of the top QB targets for Miami and Lashlee in 2022.

Jacurri Brown’s completion % had been great, but he didn’t miss this bomb pic.twitter.com/FXXHGv6AX1

Brown has told reporters that he’s a fan of Lashlee and his up-tempo offense, and that he doesn’t plan on making an announcement anytime soon.

One advantage in recruiting Brown, his high school teammate at Lowndes is already committed to Miami, 2021 linebacker Thomas Davis. So as time goes on, hopefully Davis can do a little recruiting on Brown.

After an interception by #Canes commit Thomas Davis, 2022 QB Jacurri Brown takes Lowndes down the field for a score. The Vikings lead 7-0 late in the 1st Q. #CorkyKell20 pic.twitter.com/jFOee8OjZd

As of right now, Brown has listed a number of schools that he’s talking to, but some believe the Gators may be the team to beat.