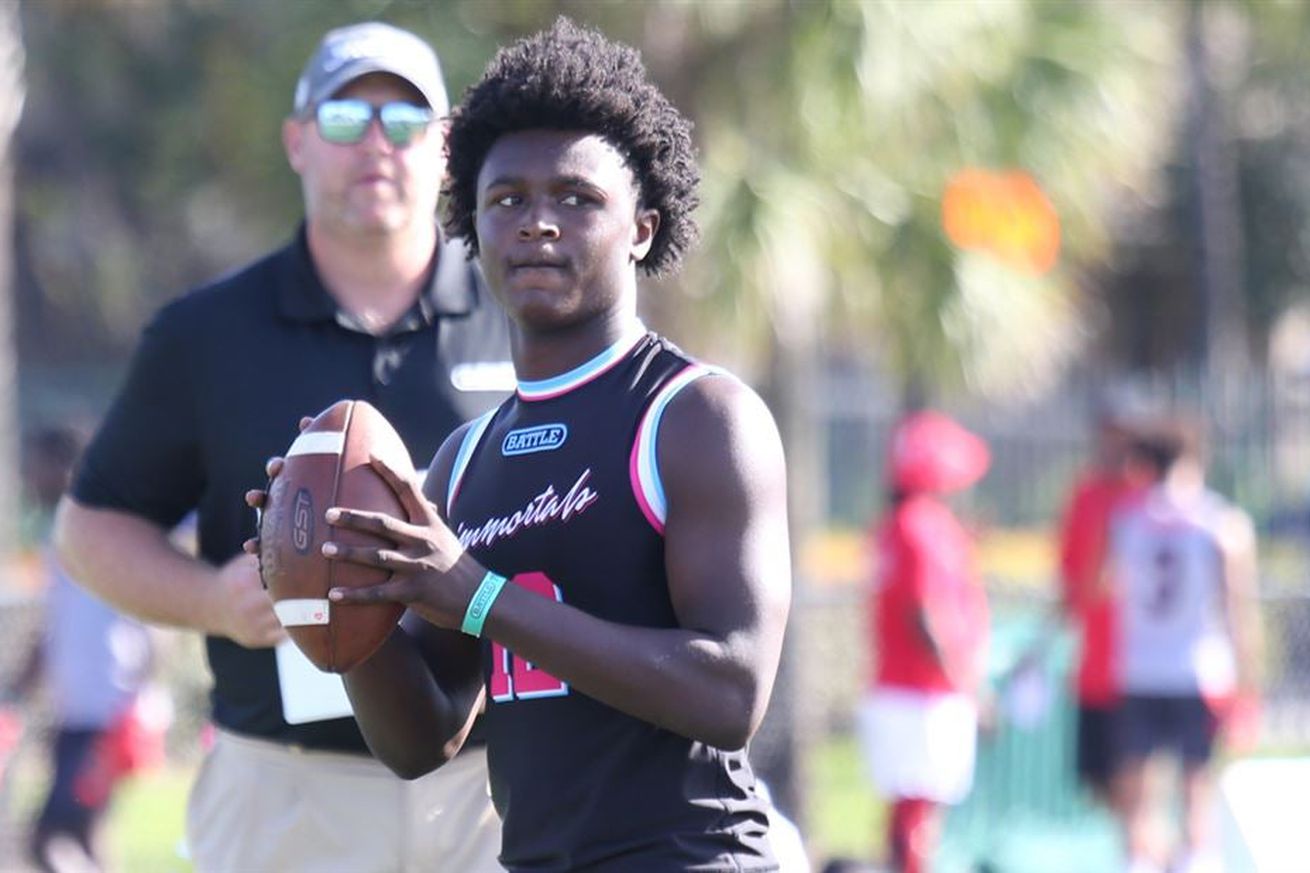 After leading his team to a state championship as a sophomore, Zion Turner may become a household name here very soon.

With the 2021 recruiting cycle coming to an end in several months, it’s always good to look ahead to the next class, and there’s no more important position to look at than quarterback. Over the next few weeks, I’ll be doing little intro pieces on different 2022 QB’s, a class that is stacked at that position.

2022 QB Zion Turner 6‘1“ 185 had a breakout season in 2019 proving to be one of the top signal callers in south Florida. Live arm, Quick feet and excellent Football instincts. Rising star shows 4* ability.@_zionturner pic.twitter.com/WUIjPn2Wn9

Last year, Turner won the starting QB job as a sophomore, and all he did was help guide his team to a perfect 15-0 record and a state championship. Turner finished the season throwing for 1,782 yards, with 25 touchdowns and 7 interceptions, completing around 62% of his passes. He also added 402 yards and a team-high 12 touchdowns running the football. Turner was named second-team on the MaxPreps Sophomore All-American squad.

Turner received an offer from Miami in January, and was the first quarterback that Rhett Lashlee offered as offensive coordinator for UM. He’s also picked up offers from LSU, Texas A&M, Kentucky and several others.

Truly Blessed To Receive My 3rd Offer From The University Of Miami #GoCanes #TNM pic.twitter.com/xlvSlhO1AB

What excites most Canes fans about Turner, is that he’s a dual-threat QB with scrambling ability, and given D’Eriq King’s early success this season with Lashlee, Turner looks like he could be a great fit for this offense.

Zion Turner making plays with his legs early. A 10-yard keeper sets up a 1-yard sneak for a touchdown and St. Thomas Aquinas takes a 7-0 lead in the first quarter. pic.twitter.com/QQUUQ3xoRb

Though, it’s important to remember, being a dual-threat quarterback isn’t a prerequisite to lead this offense. While I like Turner’s skill-set, I’m very much impressed by his leadership skills, and his ability to make plays to win games.

On a team that is filled with high-profile recruits every year, Turner earned the QB job in his second year without having any varsity experience. In the state championship game, when St. Thomas got down 14-0 in the first half, it was Turner who led the Raiders on the comeback, and an eventual 28-23 win. In that final game, Turner threw for 118 yards and 1 touchdown, and rushed for 75 yards and 2 touchdowns.

The Raiders add to their lead as quarterback @_ZionTurner goes in for the score. @STA_Football up 21-6 over Carol City with 10:32 left in the 3rd quarter. @FootballHotbed pic.twitter.com/aS6JdCf51F

As a passer, Turner has shown that he can throw a great deep ball, and as the 2019 season went on, you began to see him make elite throws with pinpoint accuracy. Still, the St. Thomas offense was very run-heavy last year, with talented tailbacks. Though, with Turner now a junior and more experienced, I wouldn’t be surprised to see the Raiders throw the football more and install more spread passing concepts. This year will be crucial for Turner to show more of his skills as a passer, not just what he can do running the football.

However, Turner has somewhat flown under the radar when it comes to 2022 quarterbacks, and it may be because South Florida has never been considered a QB hotbed. Though, with many offenses around college football looking for QB’s that can direct spread attacks, Turner is going to be household name this time next year. During his junior season, I expect to see him develop into one of the top quarterbacks in Florida.

When it comes to Miami, it seems that Lashlee and Turner have a very solid relationship, and they talk frequently. Like I said before, I think this kid will become an elite talent and the bigger schools will just keep coming as time goes on. Hopefully the Canes continue to build the relationship with Turner, and we’ll see here in the next couple months how serious UM is in really pursuing him.