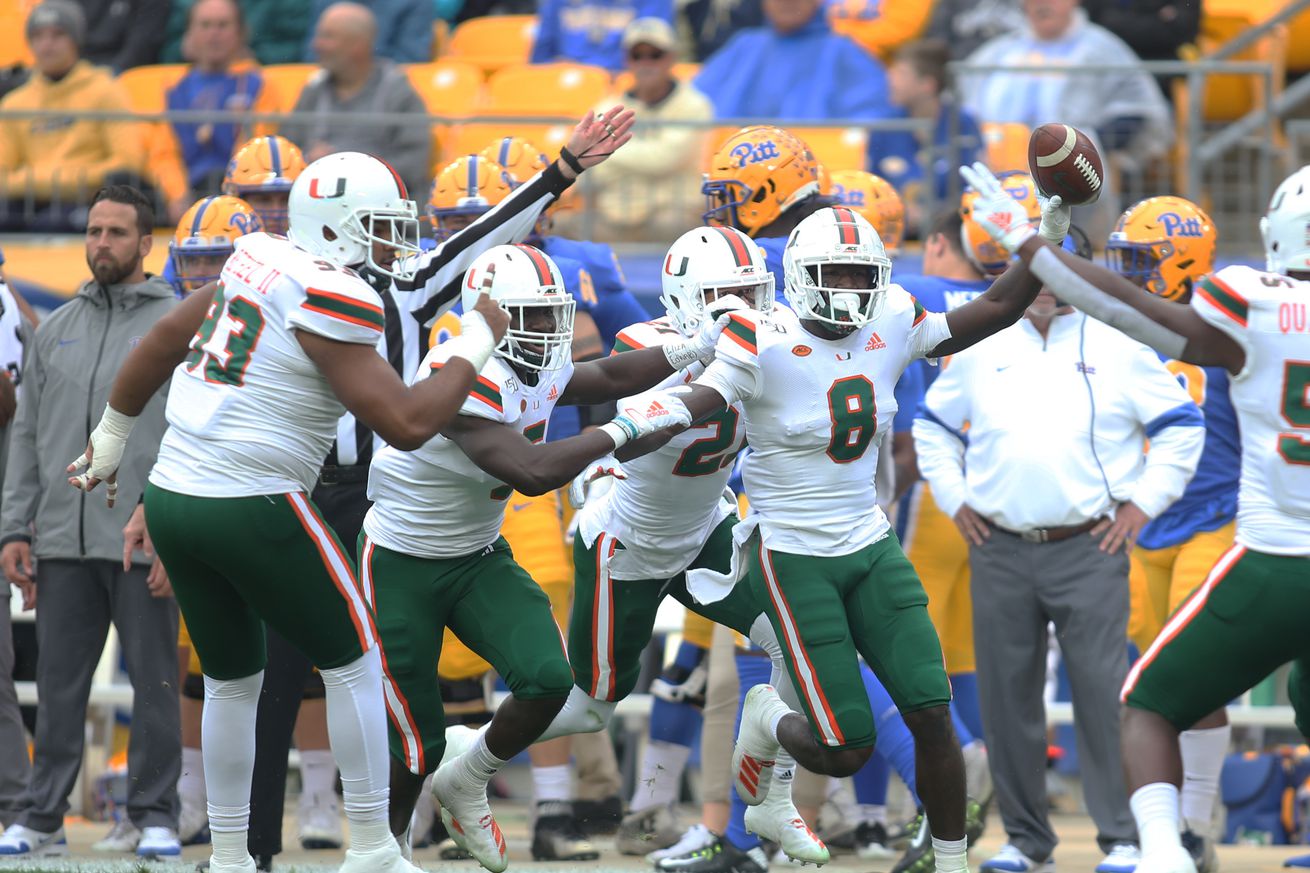 With several playmakers on offense, how can the Miami defense slow the Blazers down on Thursday?

Manny Diaz has always had a dominant defense ever since he came to Miami in 2016, first as defensive coordinator and then last year as head coach. In 2020, I expect that dominance to continue, and it starts against UAB on Thursday night in the Canes first test of this new season.

Let’s check out my 3 defensive keys to victory for Miami.

UAB’s most reliable weapon is their running back, Spencer Brown, who just happens to be the all-time leading rusher in program history, with over 3,100 career rushing yards. In their first game of the season against Central Arkansas, Brown had 127 yards on the ground and 1 touchdown.

The Blazers are well aware of Miami’s duo at defensive end in Quincy Roche and Jaelan Phillips, so I expect UAB to run Brown right up the middle. This means that it’ll be a busy night for defensive tackles Nesta Jade Silvera and Jon Ford. The DT spot has been questioned all offseason, and now they can shut up the critics with a big performance in week one.

Weighing in at 220 pounds, Brown is a handful at running back, and isn’t easy to bring down. So not just Silvera and Ford, but Miami’s linebackers also have to step up to the plate, namely Zach McCloud and Bradley Jennings Jr. If you can shut Brown down and force UAB to pass more, well then that’ll just lead me to my second defensive key to victory.

Manny Diaz said UAB presents a big back in Spencer Brown (6-0, 220). Without having many opportunities to tackle, the opener will be a challenge. “We’ve got to be ready to go from the first minute.”

Johnston is the Blazers veteran quarterback, and has had a good amount of success in the past several years guiding this offense. In 2019, Johnston was in the top 10 in college football for yards per completion (9.0), and finished the season with 2,250 passing yards and 17 touchdowns.

HAVE A DAY TYLER JOHNSTON III!

While he’s led UAB to countless wins in his career, Johnston also has been known to be aggressive when making throws. In the last two years, he’s thrown 24 interceptions, 15 in 2019. Against Central Arkansas last week, Johnston went 17-for-25, throwing for 143 yards, 2 touchdowns and 1 interception.

UAB quarterback Tyler Johnston III with a poor throw and an interception near the end of the 1Q. He needed to clean that up in the offseason. Not a good sign early for the Blazers. Johnston threw 15 INTs last year (tied for third nationally). UCA converts into TD. UAB 14, UCA 7.

Thursday will be the perfect time to unleash the Hurricanes pass-rushing attack of Roche and Phillips. If Miami is able to get to Johnston, then they’ll have plenty of opportunities to come away with turnovers and take the Blazers out of the game early.

to say I’m excited for Central Arkansas vs UAB tonight and watching College Jameis (cc @PFF_Eric) is an understatement pic.twitter.com/M6hFySauUY

With Brown in the backfield, the Blazers biggest threat in the passing game is wide receiver Austin Watkins Jr. The redshirt senior has established himself as one of the top WR’s in college football, and was named to the Biletnikoff Award Preseason watch list.

HAVE A DAY AUSTIN!

Watkins Jr. now has 6 catches for 167 yards and a TD after this 44-yard completion. pic.twitter.com/bNe2D3v0Vn

In 2019, Watkins hauled in 57 receptions, for 1,092 yards and 6 touchdowns, accounting for 38% of UAB’s wide receiver production. He was also one of the best receivers once he got the ball in his hand, averaging 19.16 yards per reception. In UAB’s first game last week, he had 7 catches for 72 yards.

Watkins is the top target for Johnston, and you better believe that he’ll be targeted early for the Blazers. Miami cornerbacks Al Blades Jr. and DJ Ivey need to shut Watkins down, and take him out of the gameplan early in the night. If they do that, the Canes defense should be able to coast and dominate.