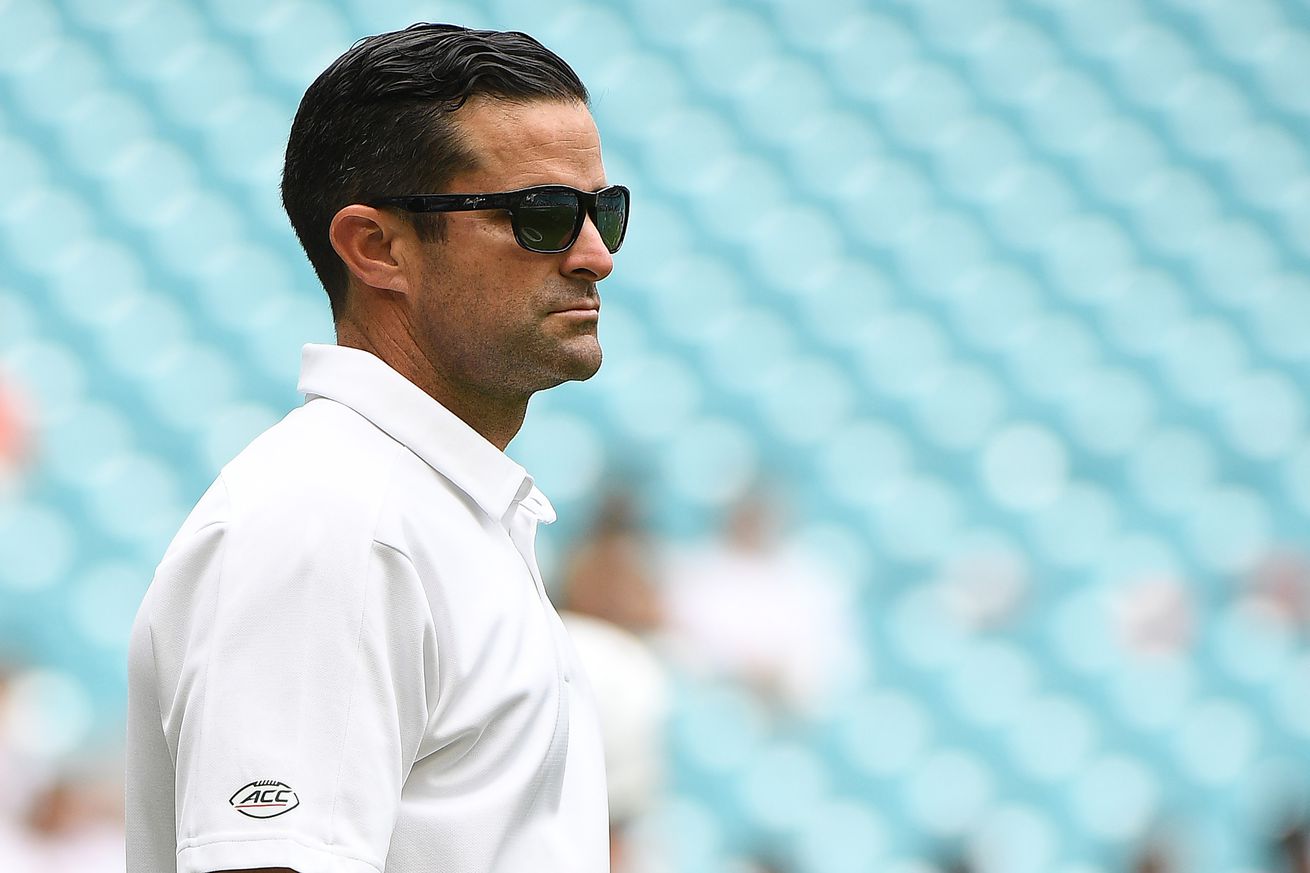 Last month, when Booker T. Washington star wideout Jacorey Brooks pledged to join the Alabama Crimson Tide instead of the University of Miami, it was just the latest South Florida native to choose another school over staying local with the Canes. It is not necessarily a surprise that Brooks, the consensus top three receiver in the 2021 class, chose the school that is considered the premier organization in college football. However, losing the hometown talent that the Canes definitely placed a high priority on was a tough blow, especially considering the bulk of Miami’s recruiting classes are players who opt to stay home.

Fast forward a month later and it appears the Canes homegrown retention plan remains in tact as Miami landed two local commits in just as many weeks. First, four-star WR Jacolby George committed to the Canes for a second time. George, who went to high school just a short drive up I-95 at Plantation High School in Fort Lauderdale, initially committed to Miami in June 2019. However, based on Miami’s abysmal 2019 season, he de-committed in the middle of the season. The time to re-consider led to the same result, as George ultimately re-committed to the U.

Then, on Sunday night, Manny Diaz hit another recruiting home-run when the Canes landed a four-star wideout out of Miami Northwestern, Romello Brinson, who made his announcement on Instagram live. Like George, Brinson had left Miami’s commit list during the 2019 season.

While Brooks’ Bama commitment was disheartening and the George and Brinson commitments provide some optimism for Diaz and the Canes, it is imperative that the Canes continue to maximize the talent heading to Miami in 2021. As of right now, Miami is ranked ninth nationally according to 247Sports. However, there are a number of prospects, mostly local to South Florida, that could make the 2021 class indubitably the best in recent memory. While there are numerous potential recruits hailing from the South Florida area and even more that are on Miami’s top target and high choice lists, there are a few big names that have a decent probability of committing to the Canes for 2021.

At this point, there are a few interesting recruits worth honing in on, who would be nice pickups for Diaz and Co. Specifically, there has been recent noise surrounding Jake Garcia/QB, Leonard Taylor/DT, Brashard Smith/WR, Kamren Kinchens/S, Corey Collier, Jr./S, and Jabari Ishmael/DE, and their possible interest in joining the Miami contingent.

Now, Garcia is not a Miami native and committed to USC in September 2019. However, the pocket passer who is the 19th ranked recruit in ESPN’s Top 300 list for 2021, has been drawing some emojis from the Canes faithful after USC recently received a commitment from the 37th ranked recruit, QB Miller Moss, on June 1, 2020. While landing Garcia is no guarantee, the pocket passer style QB visited Miami in June 2019 and may have drawn some more emojis after he tweeted some admiration over Brinson’s highlight tape.

Oh yeah this is live https://t.co/MPGw6Fj0bV

Taylor, a five-star recruit, hails from Miami Palmetto High School and would be a huge addition in Miami’s grassroots campaign. At this point, unfortunately, University of Florida appears to be Taylor’s favorite, based on the 247sports lead expert predictions. However, with a strong defensive line in Miami this year, Taylor may be tempted to learn under the tutelage of the Canes’ defensive line coach, Todd Stroud, and what looks like one of the best defensive lines in the nation going into the 2020 season. Like many of these prospects, if Miami has a successful season, it will sweeten the pot for Taylor.

With the recent wide receiver additions in Miami, Brashard Smith may be compelled to join Rob Likens’ emerging receiving corps. Similar to Taylor, Smith is also a Miami Palmetto High School junior. At this point in Smith’s decision-making process and much to the delight of Canes fans, Smith decommitted from the Florida Gators on May 1, 2020. Just prior to his decommitment, Smith attended junior day at Miami in January. The junior also appears to be considering Oregon and Tennessee.

Similar to Brinson, Kinchens is a Miami Northwestern product, which has been a popular target high school for the U as they have already received 2021 commitments from LB Jac’Corey Hammet, TE Kahlil Brantley, and CB Tim Burns, Jr. At this point, Kinchens’ favorites appear to be the U, along with Texas A&M and Auburn, but he is slated to make a decision on July 11. While not notorious for being a DBU as of late compared to other school’s in the nation, Kinchens would have an opportunity at Miami to be mentored by 2019 Safety recruits, Avantae Williams and Jalen Harrell. Also, the rich history at the safety position out of the U, which includes Sean Taylor, Ed Reed, Bennie Blades, among many more, is also a good selling point.

Another strong candidate at the safety position is Corey Collier, who announced his top six on Twitter on May 20, which includes Clemson, Florida, Florida State, Georgia, LSU, and Miami. FSU appears to be one of Collier’s favorites, so a November 7, 2020 Miami win over the Seminoles may assist with moving the needle in the Canes’ favor. Collier also attends Miami Palmetto High School and, even though the odds are not currently in Miami’s favor to land Collier, he will be an interesting player to monitor in the coming months.

Jabari Ishmael, an effective edge rusher, attends Columbus High School in Miami. Ishmael appears to be leaning towards choosing University of Miami but is considering other Florida and SEC schools on his list. Similar to Taylor’s situation, if DL coach Stroud helps lift Gregory Rousseau, Jaelan Phillips, and Quincy Roche’s draft status, then Ishmael could be even more drawn to lead the next pedigree of defensive linemen in the 305. Further, it helps that Ishmael’s father, Victor, has ties to the U as a former assistant strength coach.

The task of keeping the South Florida talent in the 305 has certainly not been easy one for the recruitment group led by Diaz, which my colleague, Stephan C. Cheatham, noted in a May 22, 2020 article that revealed Miami has garnered only 26 of the top 120 players from South Florida since 2015.

In order to take the Miami program to new heights, the success needs to be shown on the field and hopefully other local talents will follow Brinson and George’s lead. If Miami can turn it around after last year’s 6-7 performance, then they will be more enabled to continue the recent recruiting run as it continues throughout this upcoming fall season. After all, and understandably so, many prospects will be hesitant to commit to a program that has finished 13-13 in the past two seasons overall – and a successful season is also crucial for retaining the talent that has already committed.

It is evident that the Canes cannot collect commitments from all of their top choices and/or players from South Florida. But, with the recent commitments, there are numerous other 2021 recruitees whose interest may be piquing in Miami’s direction – especially those who are interested in Miami’s grassroots recruiting campaign.