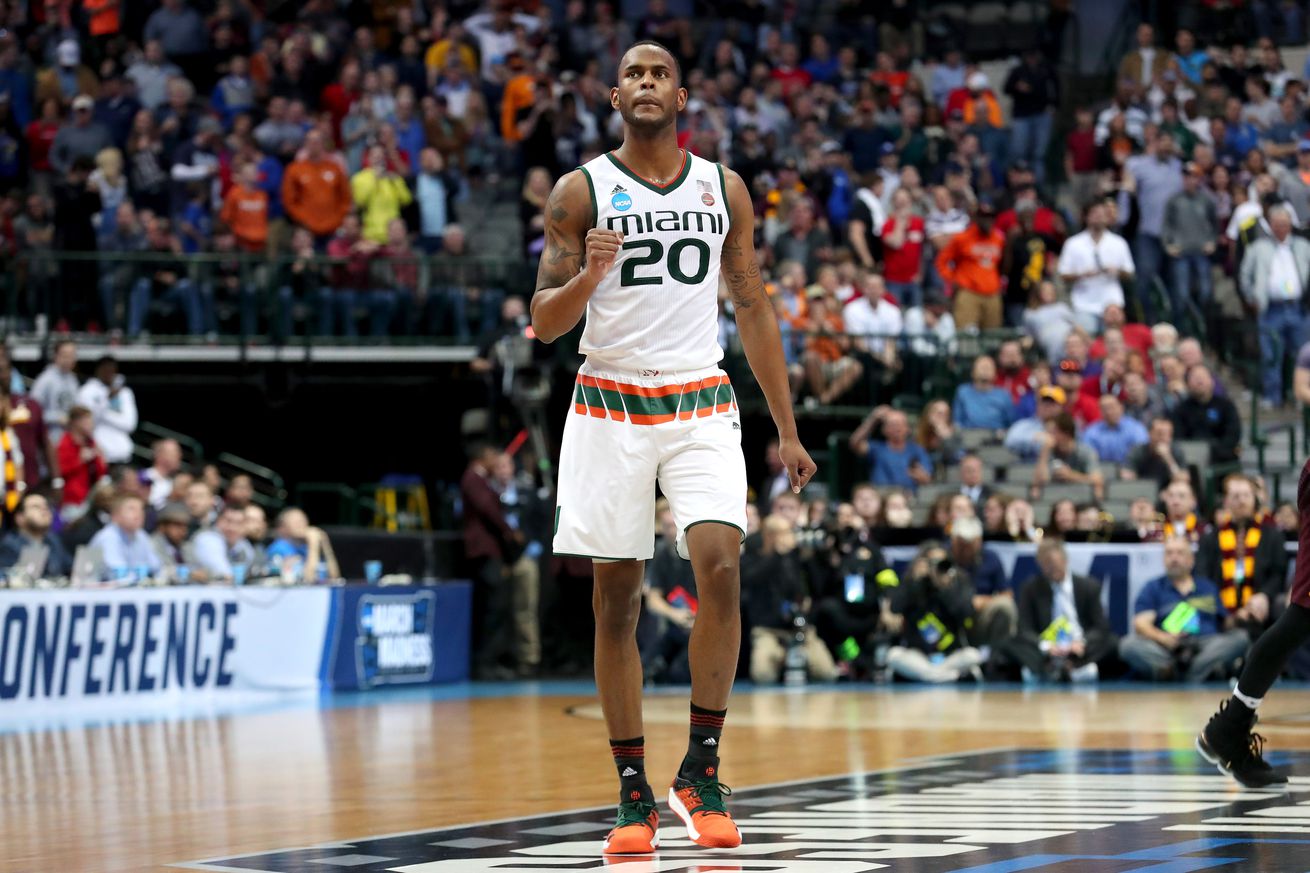 Former Miami Hurricanes center Dewan Hernandez was an integral piece for Coach Jim Larrañaga’s program. But it was all until an FBI investigation had forced the NCAA to revoke Hernandez’s eligibility for his junior year in the 2018-2019 season, causing him to head to the NBA instead.

Former Hurricanes forward Dewan Hernandez could have done light years more for Coach Jim Larrañaga and the Miami program. His time on the hardwood in Coral Gables, Fla., was cut short far too soon back in 2019.

Hernandez and the ‘Canes were primed for another NCAA Tournament run in the fall of 2018, after falling to the Loyola (Chicago) Ramblers in the first round that March. The Miami native had become a frontcourt starter in his second season, averaging 11.4 points and 6.7 rebounds per game.

Though the 6-foot-10 center had shown flashes of brilliance, he would never play another minute for the two-time ACC Coach of the Year. The NCAA had determined him ineligible for competition in January 2019 while an investigation on corruption in college basketball was being conducted.

“Hernandez agreed to receive monthly payments from an agent and accepted other benefits from the individual,” the NCAA said in a statement upon the decision. “According to the guidelines adopted by NCAA membership, the starting point for these violations is permanent ineligibility, but the NCAA staff recognized mitigating circumstances based on the specific facts of the case when making its decision.”

A former five-star recruit, Hernandez would have been Miami’s eighth scholarship player that season—one that was filled with close losses. The former McDonald’s All-American instead entered his name into the 2019 NBA Draft, prepared to take his talents to the next level.

The ‘Canes meanwhile went 14-18 (5-13 in ACC) without their leading shot blocker, losing to Virginia Tech in the second-round of the 2019 ACC Tournament. The program ultimately missed out on the NCAA Tournament, finishing 11th in the conference.

Though some mock drafts had predicted Hernandez to go undrafted, he did in fact hear his name called that night.

“With the 59th pick in the 2019 NBA Draft, the Toronto Raptors select Dewan Hernandez from the University of Miami,” NBA Deputy Commissioner Mark Tatum announced.

Though a scant number of fans remained at the Barclays Center (Brooklyn, N.Y.) upon the selection, Hernandez, let alone ESPN college basketball analyst Jay Bilas, was relieved to hear his name called.

“[He was] declared ineligible over a hotel room, and only because he told the truth,” Bilas said. “But he’s a good player and I’m really glad to see him get drafted because he has been through an absolute nightmare that was not of his making and [that] he did not deserve.”Hernandez appeared in six games for the Raptors during the interrupted 2019-2020 season, spending most of his rookie season with the team’s G-League affiliate, the Raptors 905. And it did not take long to turn heads in his debut, recording a double-double despite lacking a consistent NBA shot.

“His length is pretty impressive in terms of how he can move the ball,” Raptors 905 Head Coach Jama Mahlalela said. “He started with those two early threes which I think is a good sign as [a] five that can pop and shoot, that’s a great sign for him.”

Raptors 905 teammate Oshae Brissett, a former Syracuse forward, believes the former ‘Cane still has plenty of improvement ahead of him.

“We need him to score and get some stops,” Brissett said after the 109-94 loss to the Grand Rapids Drive. “Dewan is a great player and he understands the game really well. It won’t be harder for him to be an asset for us.”

Hernandez would continue to produce solid numbers for the team based in Mississauga, Ontario, averaging just over 29 minutes per game through nine games. He would start all nine of those games while scoring 13.7 points per game and averaging 9.1 rebounds as well.

With the Raptors having lost to the Boston Celtics in Game 7 of the Eastern Conference semifinals on Sept. 11, Hernandez looks towards the offseason to continue working on cracking a consistent rotation spot.

The NBA season will likely not begin until after Jan. 1, 2021 due to the setbacks of the COVID-19 pandemic. This gives players like Hernandez, who did not see any postseason action during the NBA restart, enough time to continue refining their offensive tools while further adjusting to the NBA level.