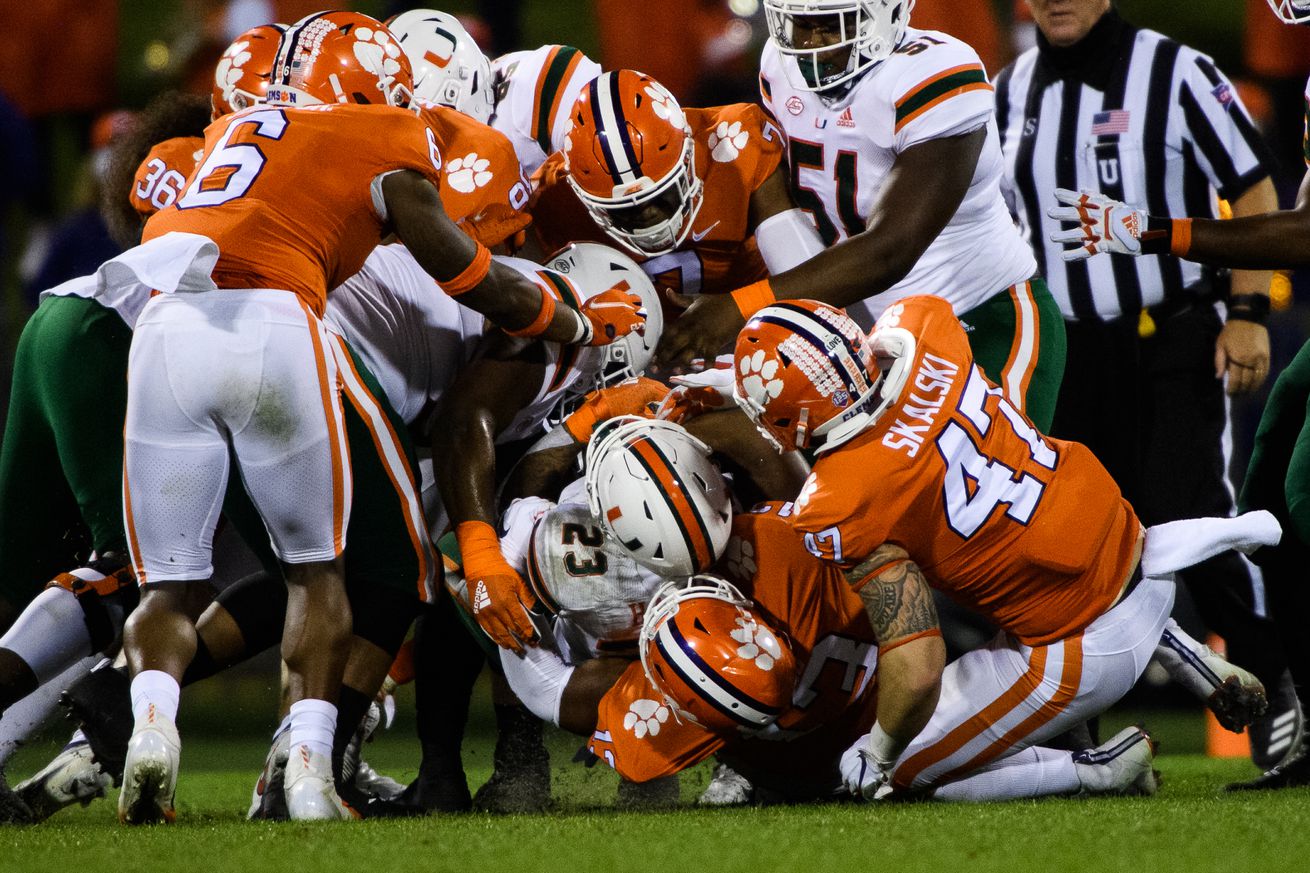 Miami RB Cam’Ron Harris is in that pile. I promise he is. | Ken Ruinard-USA TODAY Sports

Miami has struggled to bounce back after big losses in the past. That can’t happen again this year.

Everybody knows what happened last week: Miami had a big game against the Clemson Tigers….and lost. Badly. While the loss wasn’t the goal, it isn’t the entire story of this season either. But, if we look into the recent past, Miami has plenty to work on to avoid a season-ruining collapse.

Let’s not look at EVERY loss recently. That would be foolish. We’re going to look at similar losses; games against highly ranked teams that were big, emotional games. Spotlight games. Big, notable, impactful games.

And, I’m adding two more games, and the reasons why will become clearly apparent momentarily:

Yeah, there’s a win in there as well, because what followed was stupid. But, in all, there are 4 big games in the past 7 seasons that Miami has lost, and lost badly.

But, the bigger point here is that following those losses (and one outlier win), the losses kept coming. Miami was unable to absorb a loss and bounce back with wins. No sir. Not them. Instead, multiple additional losses followed the big game loss, and each of those seasons tanked.

In 2013, Miami entered the FSU game at 7-0. There were things to like, but after a couple close games — wins over North Caroline and Wake Forest by a combined 7 points — a legendary FSU team proved that Miami wasn’t really that good in Doak Campbell Stadium that night. A 41-14 loss to the Noles was followed by 2 more losses in the subsequent weeks. In all, Miami lost 3 of their last 5 games that season, ending with the infamous Russell Athletic Bowl beatdown at the hands of one-time Miami commit Teddy Bridgewater and the Louisville Cardinals.

In 2014, Miami had FSU beat. And then Dalvin Cook took over in the 4th quarter to save the Noles and extend their streak against Miami. After that heartbreaking loss against a hated rival in a primetime game, Miami would lose their next 3 games, all of them to unranked teams.

In 2016, Miami would lose to FSU YET AGAIN. And, following that loss — the block at the Rock game, if you were wondering — Miami would go on to lose their next 3 games. Those losses including dropping games to a 5-loss UNC team and a 4-8 Notre Dame team that almost everybody clowns to this day for being horrible. And they beat the Canes.

In 2017, Miami entered the Pittsburgh game 10-0 and #2 in the country. Miami lost that game — with Pittsburgh employing a defensive gameplan they’ve consistently used against Miami and will undoubtedly employ this week — and then lost their next 2 games. Those following losses, however, were to ranked teams in eventual College Football Playoff #4 seed Clemson, and #7 Wisconsin, a frequent bowl-game rival in the last decade. Those were BY FAR the best teams Miami lost to following any of the losses I’ve listed today.

In 2018, Miami followed a WIN against Florida State — a game that showed chinks in Miami’s armor with FSU building a 27-7 lead before a furious Canes comeback — by losing their next 4 games, all to unranked teams.

All told, following those 4 big game losses (and one outlier win), Miami went 0-14 in the games that immediately followed. Over 5 seasons, that’s an average of just roughly 3 losses per year directly following a big game/target game/emotional game loss (and one win).

Not only has Miami been unable to raise their level of performance to win big games, they’ve been unable to right the ship following big losses, and the losses have continued to pile up. Week over week. Year over year. Coach after coach. It’s been the same old story.

And, that’s not even mentioning other standalone big game losses, such as the worst loss in program history — 58-0 to Clemson in Al Golden’s final game in 2015. Or Getting embarrassed by LSU in the 2017 season opener. Those are special losses all their own, but, ironically, they did not incite major losing streaks like the other games did. Weird, but true.

So what’s the point? Why am I writing this?

Because, for Miami to have any positive conclusion to the 2020 season, the Canes will need to figure out a way to compartmentalize the Clemson loss and get back to the business of winning.

In far too many instances (which I’ve conveniently listed above), Miami has not only lost their “big games”, they’ve let the big games come back to beat them again, and again, and again in the aftermath. Maybe it’s a fractured mindset. Maybe it’s being emotionally drained from getting so amped up for a big game so that the team doesn’t have anything left for the next game(s). But, whatever the reason, one loss has begotten multiple other losses. And Miami cannot have that this year.

Further complicating the issue is the massive Clemson hangover that teams have had after losing to the Tigers in recent years. Since 2015, ACC Atlantic teams are 1-35 (.027) against Clemson. In the week directly following that game, those same Atlantic teams are 8-21, a 27.9% winning percentage.

The new definition of “Clemsoning” in this week’s Only* ACC Power Rankings That Matter … https://t.co/cGvBPfgJw6 pic.twitter.com/qZPfN1Vl33

In nearly 75% of instances over the last 5+ years, the team that Clemson beats one week loses the next week, as well. And, with Miami’s penchant for letting one loss snowball into multiple other losses, that has to be quite an alarming statistic.

Look, last week clearly proved that, while Miami is much improved, there is still a vast difference between them and Clemson. I don’t like it, but that’s the truth. If Miami fancies themselves to be a good team — which they should because they’re incredibly talented, have an updated/upgraded offense, and a favorable schedule — they must, absolutely MUST figure out a way to beat Pittsburgh this weekend.

Losing to Clemson isn’t what anybody wanted, but it’s understandable; Clemson is arguably the best team in the Country. But, to truly begin to take steps forward as a program, Miami has to put that loss behind them and, unlike teams of the past, keep Clemson from beating them twice (or more).