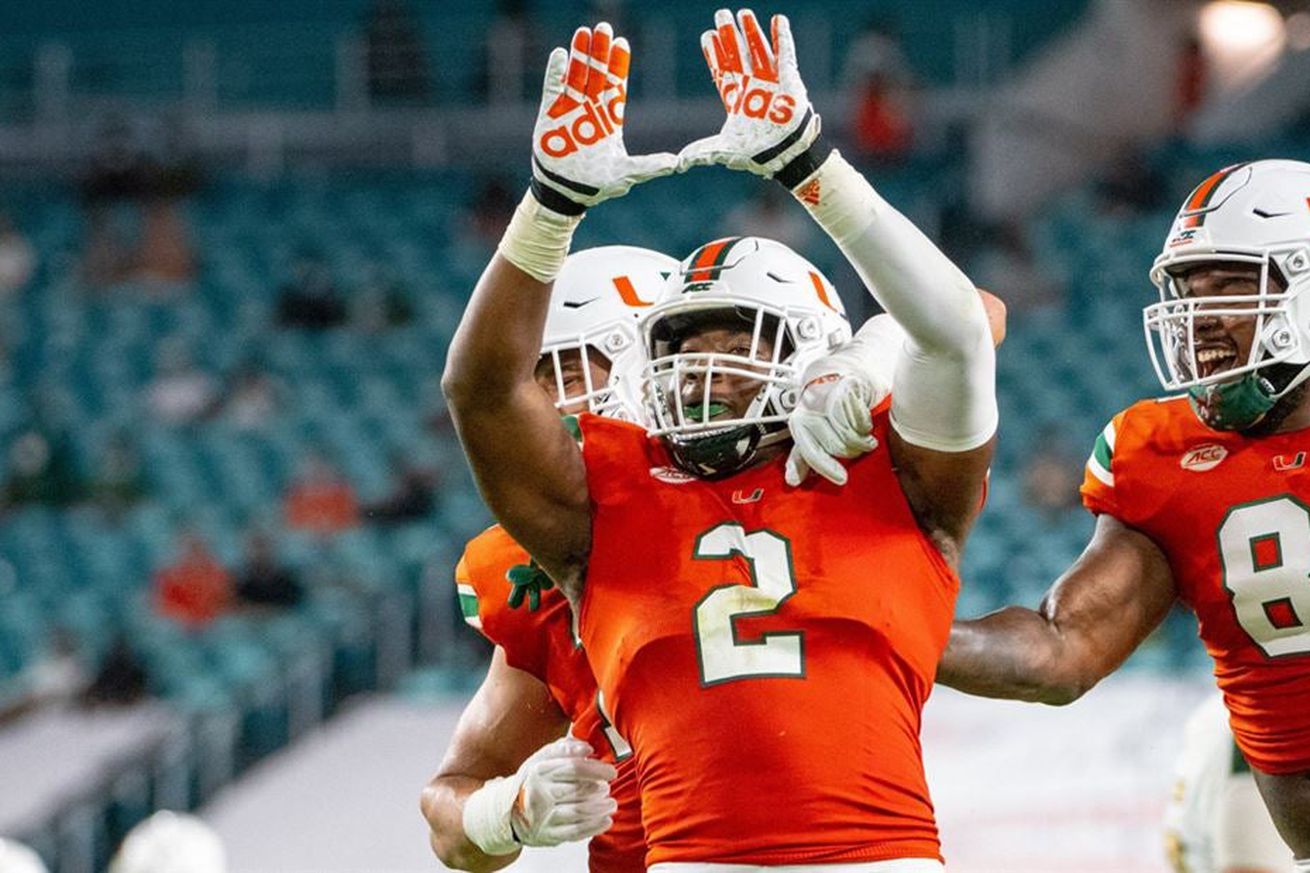 Through their first four games, the Hurricanes biggest weakness defensively had been containing the run, as they were giving up 174.5 yards per game on the ground heading into this weekend. However, against Pitt on Saturday, Miami flipped the script, and dominated the Panthers rushing attack, en route to a 31-19 win.

Versus Pitt, the Canes defense gave up just 22 rushing yards on 26 attempts, a staggering 0.8 yards per carry. The Panthers came into the game averaging around 125 yards a game running the football, some success but not an elite rushing team. Though, with starting quarterback Kenny Pickett out, you would’ve thought that a big part of the gameplay would be to establish the run more, and take some pressure on the young backup QB.

Pitt averaged just 0.8 yards per carry today. Miami’s struggled against the run this year, but today they dominated. LOVE to see that

“If you look at the rush defense, 26 carries for 22 yards, that’s phenomenal,” said Manny Diaz after the game.

Early on in the game, it was clear that Pitt wasn’t going to have that same level of success on the ground as they had their first five games. On their first drive, Miami gave up a 12-yard run to Pitt, but there was nothing after that.

Miami gave up a 12 yard run on Pitt’s first drive, and still ended the day giving up a total of 22 rushing yards. That’s what we like to see defense

A big part of their success on Saturday was the play of defensive end Quincy Roche, who had his best game yet as a Hurricane, with 7 tackles, 4.5 TFLs, 0.5 sack and a fumble recovery.

Big play Quincy Roche was everywhere today. 7 tackles, 4 TFLs, .5 sack and a fumble recovery.
One of my 3 stars of the game for the Canes pic.twitter.com/xRz033ftL0

As for the defense as a whole for Miami, the Canes finished the day with 9 TFLs, with help from safety Bubba Bolden and fellow DE Jaelan Phillips. UM’s linebackers also played perhaps their best game of the season defending the run. Zach McCloud, Sam Brooks Jr. and Bradley Jennings Jr. all did their job on Saturday, giving the Panthers ball-carriers no room to breathe. Corey Flagg Jr. was also in that linebacker mix as well.

Great to see more of Sam Brooks and Corey Flagg, keep playing them

“I thought the linebackers played well in terms of the run game,” coach Diaz told reporters.

You can talk about Flagg’s size and speed all you want.

He’s consistently in the correct position. That’s so important for our linebackers

Why Miami’s run-defense was so important today, it made Pitt’s offense rely almost completely on their passing game with a redshirt freshman backup quarterback. On Saturday, the Panthers threw the ball 47 times, compared to 26 rushing attempts. Pitt was able to pass for 278 yards, but with running the ball not an option, the Panthers couldn’t win the game off their aerial attack alone, as the Miami pass-rush and secondary did enough.

Pitt’s running back probably wishes he was tackled first by Jaelan Phillips. Instead he gets leveled by Bubba Bolden. pic.twitter.com/nYRX0fK6f8

Looking ahead, the Canes will face several teams who are among the nations top for rushing yards in 2020. Virginia Tech and UNC are in the top 10 for yards per game on the ground, and Georgia Tech is in the top 15. So while Saturday’s performance was much needed, hopefully it jumpstarts the Canes defense into a top-tier unit, against the run and the defense as a whole.