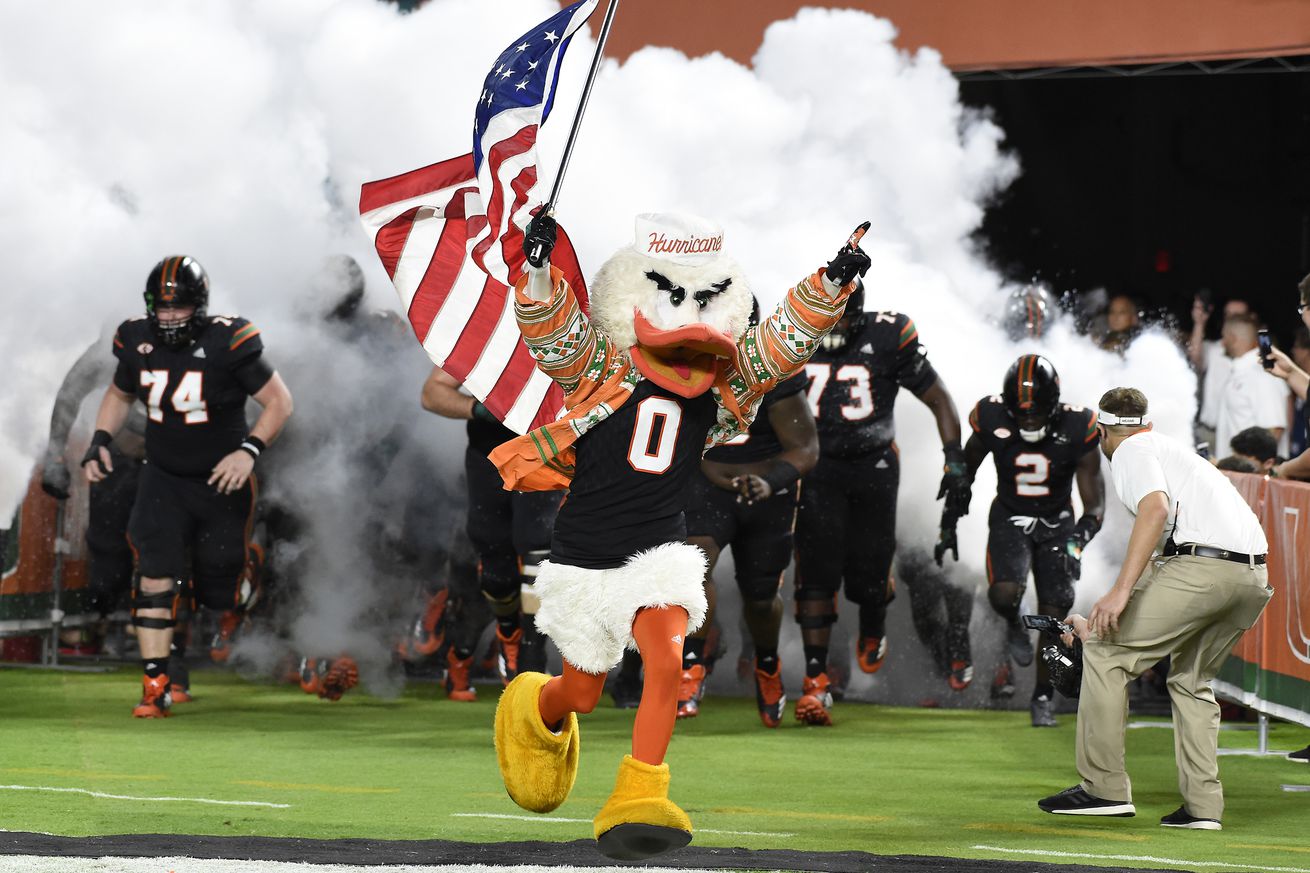 From Recruiting to A College Football Re-Branding, a Truly “Back” Miami Will Cripple a State and a Nation

No Miami doesn’t have an on campus stadium.

Yes, we HAVE struggled for the last decade and change.

No, we have not won the ACC.

Yes, we still have more titles than you, sorry not sorry.

*Wipes Hands* – That should take care of the trolls.

Over the time frame of Miami’s downturn since the early 2000’s, it has been a right of passage, for the children of those who Miami bludgeoned for nearly two decades, to kick the Hurricanes while we are down. Whether they now write for ESPN, grade recruits for Rivals or tweet from their parents basement, it’s all an opportunity to jump on the King when he’s down.

Yet, despite the attempts of the NCAA to strangle Miami to death through false accusations and legal battles, the negative recruiting of other schools, or the incompetence of past coaches and directors for the school, Miami has a pulse, and one that is beginning to beat stronger and stronger.

Since the mentioned NCAA scandal, that featured the recently transferred to home confinement Nevin Shapiro, Miami has witnessed what can be seen as a coincidental turn of events that have driven Miami to the brink. The NCAA held Miami at gunpoint for nearly 3 years follow Yahoo’ Sports damning report that stated Miami violated multiple booster related rules. During that time frame, coaches used what would amount to a dinner and some change of violations against Miami on the recruiting trail, beginning an out of town recruit-siphoning affect that is still strong as this article is typed.

Simultaneously, Miami’s mishandling of athletics, pushing more and more money away from the football program while the rest of college sports did the opposite, only strengthened the negative affect the Shapiro case had in 2011.

Miami Football was looking at an easy demise into the ether.

All along the way, the sports media has rallied against Miami as it finally had the school, which was always in the cross hairs of the good ol’ boy networks and fans, dead to rights as it always saw us, thugs and convicts. Every opportunity was had, whether to discuss Miami’s misfortunes during games, the dwindling crowds, or anything tot paint the big city school as a bunch miscreants.

As recruiting sites gained more credibility and steam, a stigma against the recruiting and coaching of Miami coaches grew to nurture an apparent disdain for Miami commits, who until recently, would regularly take a hit on their rankings, as it seemed those in the industry were the children of the parents who Miami whooped back in the day.

The Fuse Is Lit

Unfortunately, for the rest of the nation, Miami’s cache and network of players would not let Miami die. The Miami Family that features so many success stories in the NFL and outside of it continued to prop the program up, whether by acts on the field, in the form of Hall of Fame careers, or by continuing to show up and show out for the school, even when certain coaches and administrators tried to stop it. One of those family members, Mark Richt, lit the match that has Miami trending up.

Following is departure from a very successful run at the University of Georgia (145-51, second winningest coach in school history) Richt made his way home to Miami to begin the rebuilding of the Hurricanes football team. Catching the tail end of the Shapiro/NCAA wave, Richt began mending bridges locally, hosting frequent events pointed at rekindling love and trust locally at schools and in homes. He spear headed the build of Miami’s new Indoor Practice Facility, the upgrading of Greentree’s Fields, and most importantly, reminded the rest of the world how damn good it looks when Green and Orange is winning on the national stage.

He was also the reason our current coach, and son of Miami, Manny Diaz, is back home as coach of the Canes. If Richt was the one that lit the flame of Miami football again, Diaz is the one who wanted to, and continues to want, to set the world on fire. After what felt like a lifetime of middling defenses, Diaz brought back an attack first defense that is now seen as a regular elite, sitting in the top tiers of stat sheets in various categories since his arrival. As the rebirth has grown, so has Miami’s rep at local schools. Miami has done much better, since Richt’s return, of recapturing a portion of top local talent.

Miami’s recruiting pitch is one NO OTHER SCHOOL can give RIGHT NOW.

As Miami fights to climb back into the minds of recruits and the national media, the explosive revelation of Florida’s decision to implement its Name, Image and Likenss Bill for 2021 has come at the perfect time to push Miami into the drivers seat. Before the news, Miami was already riding a wave a momentum with the arrival Rhett Lashlee, D’Eriq King, Quincy Roche, Jarrid Williams and an embarrassment of great recruiting news inclusive of Issiah Walker’s transfer. Now Miami has a loaded gun on the trail even larger than what coaches used AGAINST Miami in the early 2010’s.

Miami’s recruiting pitch is one NO OTHER SCHOOL can give RIGHT NOW.

The University of Florida can’t say its city is a force in commerce and visibility like Miami. USC can’t say anything about Name, Image and Likeness until 2023. The SEC can’t either.

Only one school in the country has that designation and it is YOUR University of Miami.

So, what does it look like if Miami makes good on a resurgent season? If Miami can hit 10 on the wins column and get the big bowl? Or do even more?

What does college football look like if Miami is the apex of the sport?

Don’t Push Us, Cause We’re Close to the, Edge

A Miami Hurricanes Team would be a Juggernaut. And the world would be ticked.

And that is bad news for those that have taken advantage while the Canes have been down. What coincided with Miami’s lull since the turn of the century is Alabama’s Return, Clemson’s Rise and Ohio State’s dominance. The University of Florida has won Two Championships, though their rings are getting nearly as long in the tooth as Miami’s. FSU fielded a team THEY deem worthy of the same air as the 2001 Canes (its not).

And a major similarity of each team is that their championship teams had major south florida talent.

That’s just a FEW players from the bottom half of Florida that went to the mentioned schools, and not inclusive of some major names.

This isn’t to paint the picture of Miami getting everyone of those players, but getting those players much more often. Miami, will virtually have it’s pick of South Florida players. Leonard Taylor? You got it. James Williams? Lets Roll. Shemar Stewart, Cane. Miami will have gone from an afterthought, to honorable mention, to first choice. The treatment saved for UGA and Bama and Clemson on the trail would begin to include Miami, possibly even start here.

Because it means something to put on for your city. Even moreso in the South Florida area because of the hall of fame company you would keep as a star from the area. Doing that at Miami, with the new likeness rules, in front of the family, with championship aspirations, is something as mentioned, CAN NOT be had elsewhere.

Portrayal of Miami may very well be a new beginning as well. As the country continues a push in the arena of equality and resetting the narratives, there would be a new attractiveness about a team who’s history of treatment, nationally, would create a lot of olive branching and face-saving. After comments we’ve lived with as it pertains to Notre Dame, portrayals from the likes of people like Paul Finebaum and quick tongues using derogatory terms against our young men of the past and present, it would be an endless album of Keith Sweat-like apologies and overtures.

Most importantly, Miami could easily become the face of the sport once again, a thought I am sure the good ol’ boy networks would thoroughly enjoy (Sarcasm).

I know this practice in “what if’s” for Miami Football may be bordering on tired. We’ve been waiting for an end to this act for years. But as things begin to change, and the winds of fortune continue to blow the dirt off Miami’s mighty Green and Orange emblem, it is time to embrace it. “Tomorrow” needs to be retired from our fans thoughts and the reality of our strength NOW be realized.

In Ray Lewis’ Epic Paradise Camp Speech he starts, “What is a legacy without a journey? What is a journey without a destination?”

Miami Destination of Kings of College Football is upon. And the journey to get here will have made it that much sweeter.