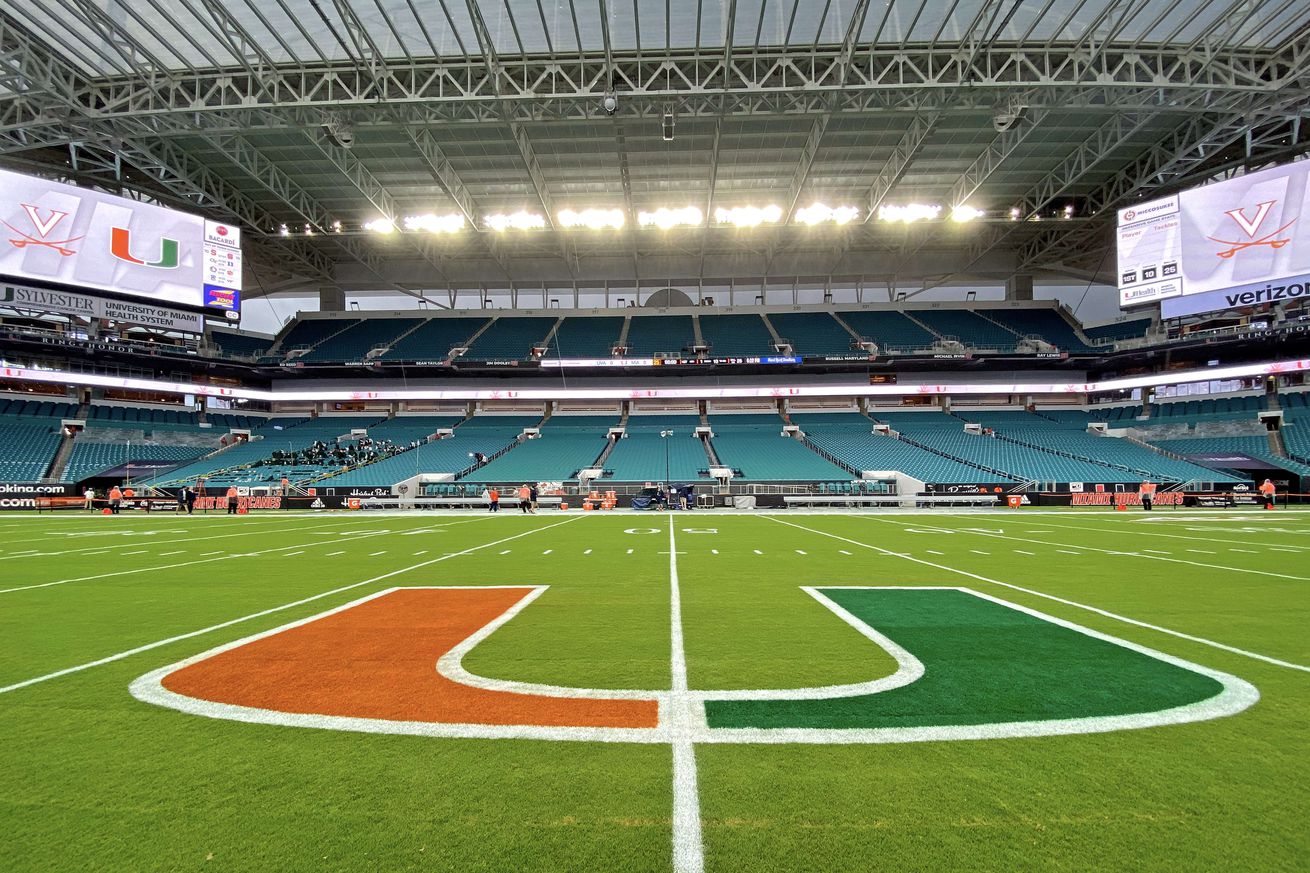 The College GameDay scene is coming to Miami once again this fall, but will not return to one of the more scenic college campuses the state of Florida has to offer.

The Miami Hurricanes will host the fourth week of College GameDay at Hard Rock Stadium for the ACC matchup between in-state rivals Miami and Florida State on Saturday.

Multiple sources announced Monday that the next edition of College GameDay in Miami will be broadcasted from Hard Rock Stadium instead of on the University of Miami campus (Coral Gables, Fla). Precautions against the spread of the coronavirus remain one of the primary concerns for the altered location.

The private university had hosted the college football analysis show on Nov. 11, 2017 when the ‘Canes smothered Notre Dame, 41-8. ESPN football analysts Kirk Herbstreit, Lee Corso, Desmond Howard, and Rece Davis, alongside show guest Alex Rodriguez, sat amongst a sea of UM students and other Hurricanes fans, with the exception of a Notre Dame fan or two.

Lake Osceola and the Donna E. Shalala Student Center complemented the background, in addition to the storied Sebastian the Ibis mascot and a handful of UM-branded sailboats on the water. ESPN, let alone the university itself, could not have asked for better weather on an 84-degree, partly cloudy Saturday.

Led by former coach Mark Richt, Miami overwhelmingly dismantled the rival Fighting Irish before a sold-out Hard Rock Stadium crowd of over 64,000 fans. The five-time champion Hurricanes had solidified their rebounded prominence on the national level before ending the season with an Orange Bowl loss to Wisconsin.

The Miami Hurricanes and Louisville Cardinals played in Louisville, Ky., on Saturday, College GameDay’s featured matchup of the week. Kirk Herbstreit announced shortly after kickoff that he and the GameDay crew would be headed to Miami the following Saturday for one of college football’s biggest rivalries.

Coach Manny Diaz, a 1995 Florida State graduate, and his program currently hold a three-game win streak over the Seminoles. One of those wins involved a second-half comeback from a 27-7 deficit at Hard Rock Stadium in October 2018.

First-year Florida State coach Mike Norvell will not lead his team this Saturday while continuing to remain in isolation, the Orlando Sentinel reported Monday. The former Memphis head coach had recently tested positive for the coronavirus.

Miami will look to improve to 3-0 and win its third straight game on the 2020 season. The program’s graduate transfer quarterback D’Eriq King looks to replicate the same explosive plays made against the Cardinals Saturday.