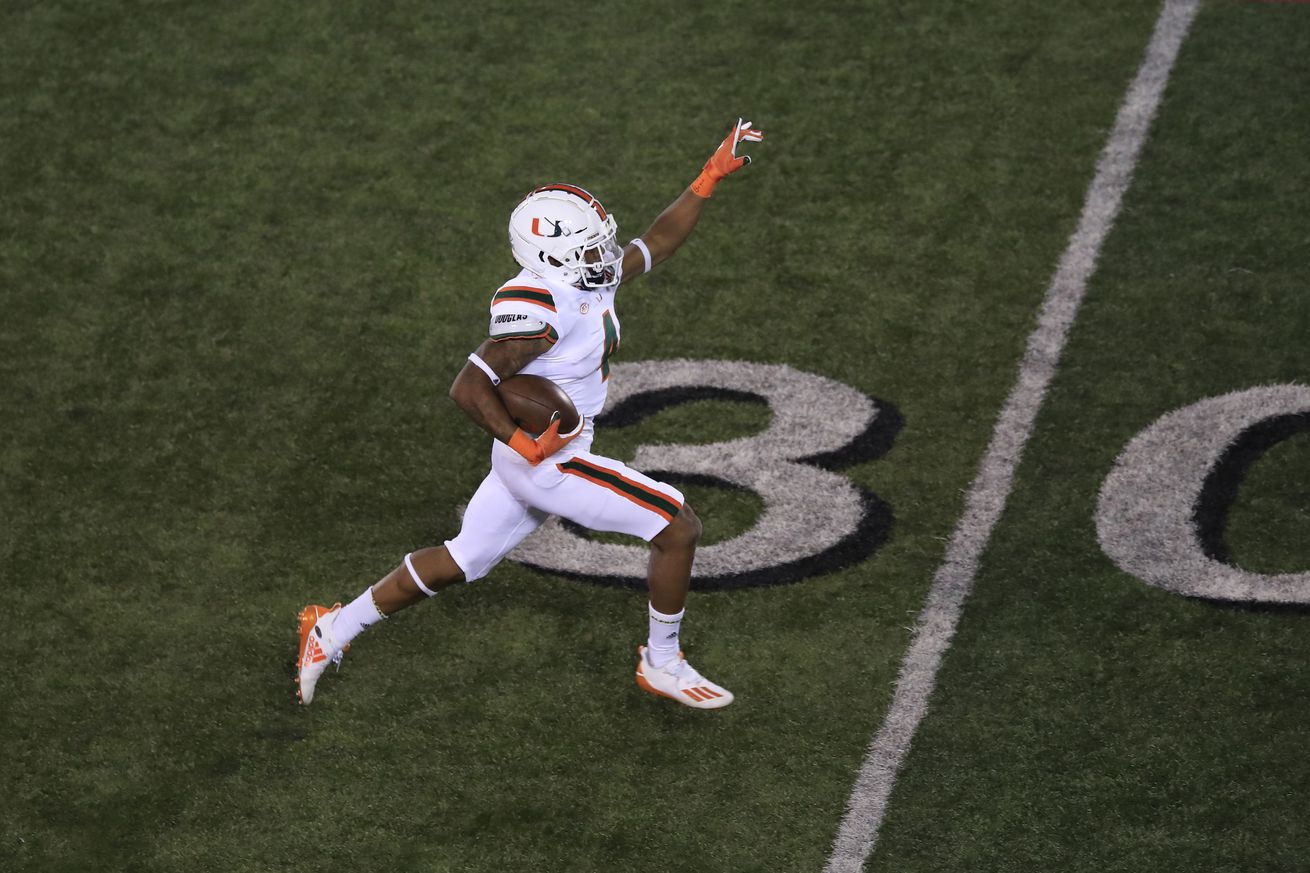 The ‘Canes host the Seminoles in the annual rivalry game on primetime!

The Miami Hurricanes will host the Florida State Seminoles on Saturday, September 26th at 7:30pm on ABC. This is the third consecutive primetime game for Miami, and second on ABC’s Saturday night main event. The U used their first ABC primetime slot to pound the Louisville Cardinals in front of the entire nation.

The 2-0 Hurricanes are ranked 21st in the nation according to Bill Connelly’s SP+ analytics system. Bill C’s computers have many teams that haven’t even played a game ahead of the ‘Canes who have won both of their contests by comfortable margins. The SP+ ranks Miami with the 39th offense, 16th defense, and 1st overall kicking game. FSU is ranked 46th overall, with an offense sitting at 48th, defense at 40th, and kicking at 30th (there are only 91 teams ranked currently in the 2020 SP+).

James Blackman finished the ‘Noles loss to Georgia Tech averaging only 4.6 yards per passing attempt while tossing one touchdown and one interception. He also fumbled the ball twice from the quarterback position. FSU also struggled to establish the run against the Jackets. FSU scored only 13 points in the loss, and managed to run for only 3.1 yards per carry as a team. They did manage one explosive catch, a 24-yarder from Warren Thompson, but the Miami defense should feast.

Above– When Blackman has time in the pocket he can drop absolute dimes. The issue for the FSU QB is he rarely has time. The FSU O-Line is terrible and this is the game where Jalean Phillips, Quincy Roche, Jonathan Ford, and Nesta Jade Silvera need to ball out. Don’t blitz safeties from 25 yards deep… just let the front four work against a really bad front five.

Above– I can see this being a deadly play against Miami (sorry Alim) for FSU. Motion, sprint out, a pick slide combo… Miami hasn’t been good under Manny Diaz on banjo’ing after the snap. What that means is when Miami’s back seven have had to switch responsibilities post snap (think on post-wheel, vert-out, or something of that nature) the ‘Canes have been lost in space.

Above– I think Miami gets much more pressure than GT on Blackman, and I know the ‘Canes can create turnovers. Miami’s linebacker play needs to improve but the defensive backs had an improved game in pass coverage against a really good Cardinals offense.

The Seminoles defense only produced one sack and two hurries against Georgia Tech’s offensive line. However, the ‘Noles defense did intercept Jeff Sims twice early on. Norvell’s crew runs a pretty standard 4-2-5 and he likes to stand the boundary defensive end up in a two points stance to allow him to pressure or peel off against a running back that swings or arrows into the flat.

Above– Jeff Sims has been really loose with the football, something D’Eriq King has not been. Sims has turned the ball over a ton both with interceptions and fumbles while King has been locked down with ball security. However, Miami has yet to face a corner like Samuel Jr. and that could lead to trouble. FSU may suck on offense, but they can still play defense.

Above– Like GT, Miami likes to run these 11 personnel (one running back, one tight end) stretch run plays. The offensive line tries to reach block or step just outside the defender, and the back takes a more horizontal path than on inside zone. Whether you call it stretch or outside zone, it doesn’t matter. Cam’Ron Harris and Jaylan Knighton are getting to the corner, and your job a a defense is to slow those two down. Good luck.

Above– “All eyez on me” for Brevin Jordan this week and that’s fine. Lashlee just needs to keep dropping in wheel-type concepts to Jaylan Knighton. Get the Rooster in space, drop a touch pass to him, and let the dude run. Timing, space, speed. The other guys are going to have to stop up with teams focused on not letting King run, and on Jordan in the passing game.

What about the other stuff?

FSU allowed GT to finish 50% on 3rd down and 1-for-1 on 4th, while splitting time of possession, and committing seven penalties for 50 yards. Turnovers, penalties, allowing a 4th down conversion- a recipe for disaster against Rhett Lashlee. FSU, however, was above 50% on 3rd down on offense and finished 3-of-5 on 4th down- showing the guts to go for it in a new regime under head coach Mike Norvell and OC Kenny Dillingham.

The FSU kicking game finished 2-for-3 on field goals and 1-for-1 on extra points, while averaging 48.3 yards per punt. FSU did a great job of blocking field goals and PAT’s against Georgia Tech, but that’s as much of a scheme thing for the Jackets as it is a scheme thing for FSU. I would suspect Miami broke those blocks down with the intent of not making the same mistakes as Coach Collins group up in Atlanta.

Also keep in mind, Mike Norvell tested positive for COVID and will not be making the trip to Miami. That puts a lot of onus on a coaching staff that’s had a tumultuous run so far in Tallahassee.

I wrote about why I think Miami beats FSU in my post about FSU’s lack of program culture. While I don’t think Miami is at the program culture level of Alabma, Clemson, or the New England Patriots– FSU’s culture is so poor they’re turning into the Cleveland Browns of college football. There’s talent, there’s hype, but no matter how many times you change the coach it’s a failure because of culture. Miami sure was feeling that same way, but maybe this is the year to turn it around.

The ‘Canes are trending up from 2019, and FSU is riding the wave into a black hole of despair. If Manny Diaz can’t beat a bad FSU team, at home, without their head coach… you’d better mute my Twitter account Saturday night.