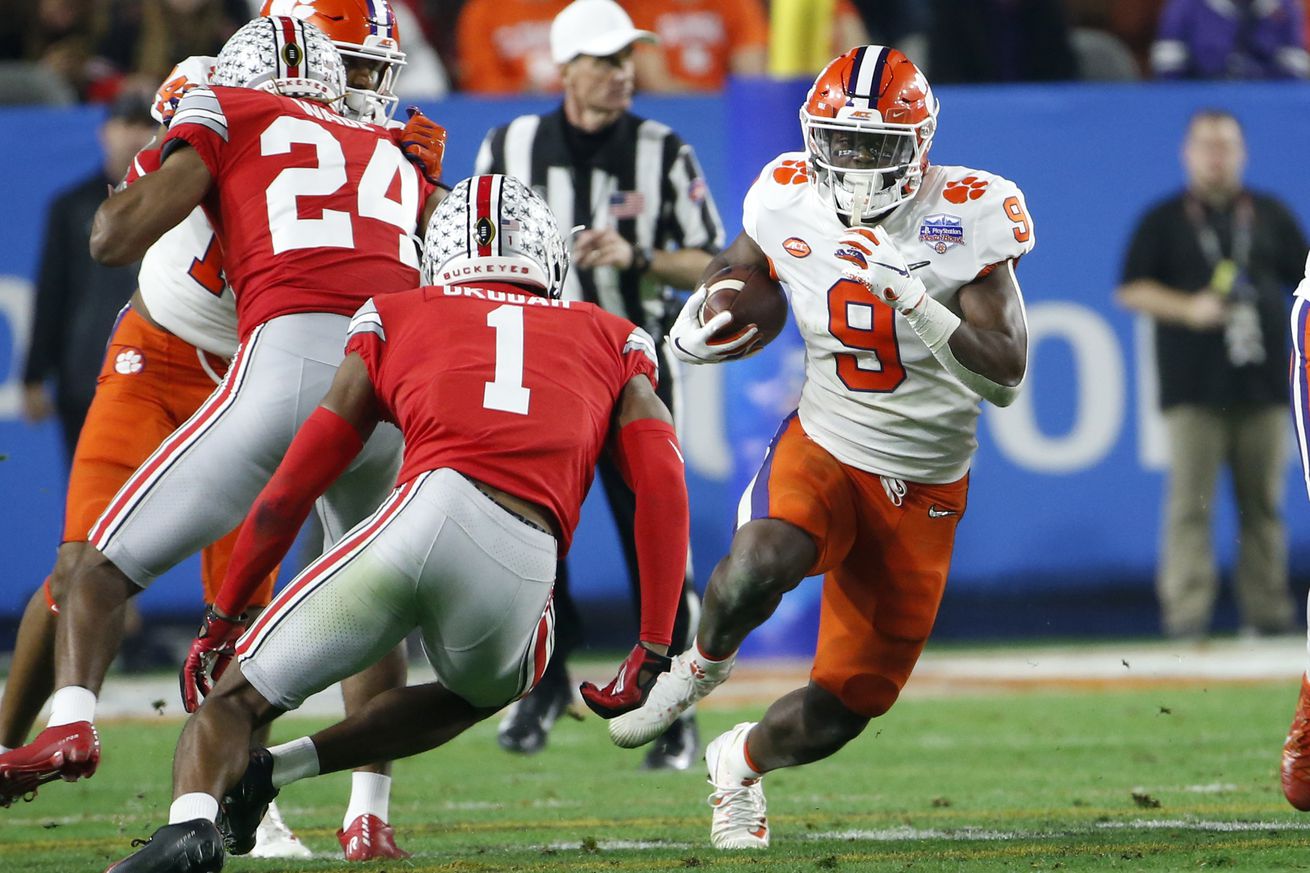 The ‘Canes head north to Clemson to face the no. 1 Tigers.

The Clemson Tigers are the no. 1 team in the country and the Miami Hurricanes are heading north on Saturday, October 10th for another primetime matchup. This will be the ‘Canes fourth straight night game, third straight 7:30pm kickoff, and third straight ABC primetime national showcase game. In the previous three games, Miami has dominated opponents by an average score of 43-19.

The U is ranked 9th overall per the SP+, with the 30th ranked offense, 6th ranked defense, and 1st ranked kicking game (I assume Bill Connelly doesn’t add in fumbled punts to his data…). Clemson is ranked 3rd overall behind Ohio State and Alabama. The Tigers are 3rd in offense, 4th in defense, and 7th in the kicking game.

As I said in my post, “The Clemson Culture Playbook,” this will be a test of cultures in primetime. Clemson, also undefeated, has been equally as dominant. The Tigers have pounded opponents 42-12 on their way to a 3-0 start. Clemson’s culture is rolling itself to an annual trip to the College Football Playoff, but is Miami’s strong enough to withstand maybe a 10 point deficit, or a key injury?

Lawrence, CU’s long haired star quarterback, has completed 73% of his passes, averaging 11.3 yards per attempt, while scoring 10 touchdowns (7 passing, 3 rushing) without an interception. Lawrence is clearly the 1st overall pick of the 2021 NFL Draft as he flashes all five tools a quarterback needs to possess at the next level.

Above– Lawrence is much more athletic than given credit for. For a six-foot-six, lanky quarterback, he can move and lower his shoulder.

The 5-tools for a QB are: arm strength (can he make NFL throws?), accuracy (lead WR’s, timing, put the ball where only his guy can get it), decision making (football IQ and reaction time), leadership (Grit, work ethic, toughness) and athleticism (move in the pocket, extend plays, run when needed).

Running back Travis Etienne has picked up 415 yards from scrimmage with three scores. Etienne has absolutely the most beautiful running form I have seen in a long time. It’s perfection. As someone that coaches movement (speed work via sprinting, change of direction, agility, sport/position specific work, and yoga/mindfulness) this is what you would desire from every outcome.

Above– That’s the perfect running form per speed guru Dale Baskett aka The Godfather of Speed. Baskett has worked with a number of professional and college teams, including Pete Carroll at USC.

Above those are screenshots and below a GIF of Etienne running in actual game action. It’s perfection. His movement efficiency allows him to cut, break tackles, spin and recover to re-accelerate.

You can teach speed. Trust me. And you can damn sure teach movement efficiency. Movement efficiency will eliminate injuries, add yards to plays, and keep you fresher in the fourth quarter (only person truly fresh in the 4th is on the bench).

How can you get to Lawrence? I hope Alim is wrong and Blake Baker doesn’t read this because it seems to be via pressure. And we all know Diaz-Baker love pressure.

Above– It’s only a 5-man pressure. UVA walks an extra defender up to the line of scrimmage (LOS), outside of the TE, which makes him harder for the left tackle to see. Lawrence didn’t see him, either. It’s one thing to walk a guy up to the LOS late and another to try to blitz from 20 yards away.

Above– I hope Diaz-Baker have been practicing tackling. This is why defensive coaches want the first guy to hold on tight and the rest of the defense to rally to the ball. The more hats the better. Also, they dive at his ankles, they don’t shoot for his hip and gator roll him which they should with those thighs.

Above– DB’s need to be aggressive. Give up a few penalties in order to stop the explosive plays. Make them do it again and again.

Clemson doesn’t have the same star power on defense they have had in years past. But they do have college football’s best defensive coordinator in Brent Venables. Venables struggled to stop the LSU juggernaut but besides that game, CU has been a lockdown unit for years.

Without the big, first round names, the Tigers are playing solid all-around football. They struggled at times against UVA to slow down a mobile QB (good for Miami) and let some tight ends get up the seam (also good for Miami).

Above– you aren’t fitting it into tight windows against Clemson. The risk is not worth the reward.

Above– How do you attack their defense? UVA scores when they get the defense moving around via motion into an empty set, and then hitting them in the middle of the field.

Above– and it still took an absolutely perfect throw and catch in order to beat the Clemson defender.

Above– the mobile QB did hurt Clemson, and D’Eriq King is much more athletic than anyone UVA threw on the field.

Miami needs to use King more as a runner against Clemson and have the entire playbook open in order to knock off the best in the ACC.

The ‘Canes are on the road, coming off of an idle week, and facing a juggernaut of ACC football. I really want to see Rhett Lashlee versus Venables add up to a blockbuster primetime billing. I’m concerned about Tony Elliott, the Clemson OC, against Blake Baker. I’m really concerned about Patke not replacing Mark Pope at punt returner.

My Canyonero keys to victory were to play flawless but not scared. You can make allowable “mistakes” (just yank the WR down if you’re getting smoked!) but not stupid ones (false starts). Take deep shots just to the outside shoulder of the WR. Be patient! Don’t force late throws deep over the middle. That’s just stupidity. Tuck and run if things aren’t open early. And get pressure on Lawrence. You can’t just let him sit back and throw for 300 yards. Make him run, put pressure on him, hit him (hit some bodeee!) and force him to beat you running.

I want to believe, and I want to see Miami win. It’s not that I think they can’t, it’s that I think Clemson won’t allow it. This isn’t Syracuse for Clemson, this is Miami. They know Miami wants to unseat them and they’ll come in prepared.