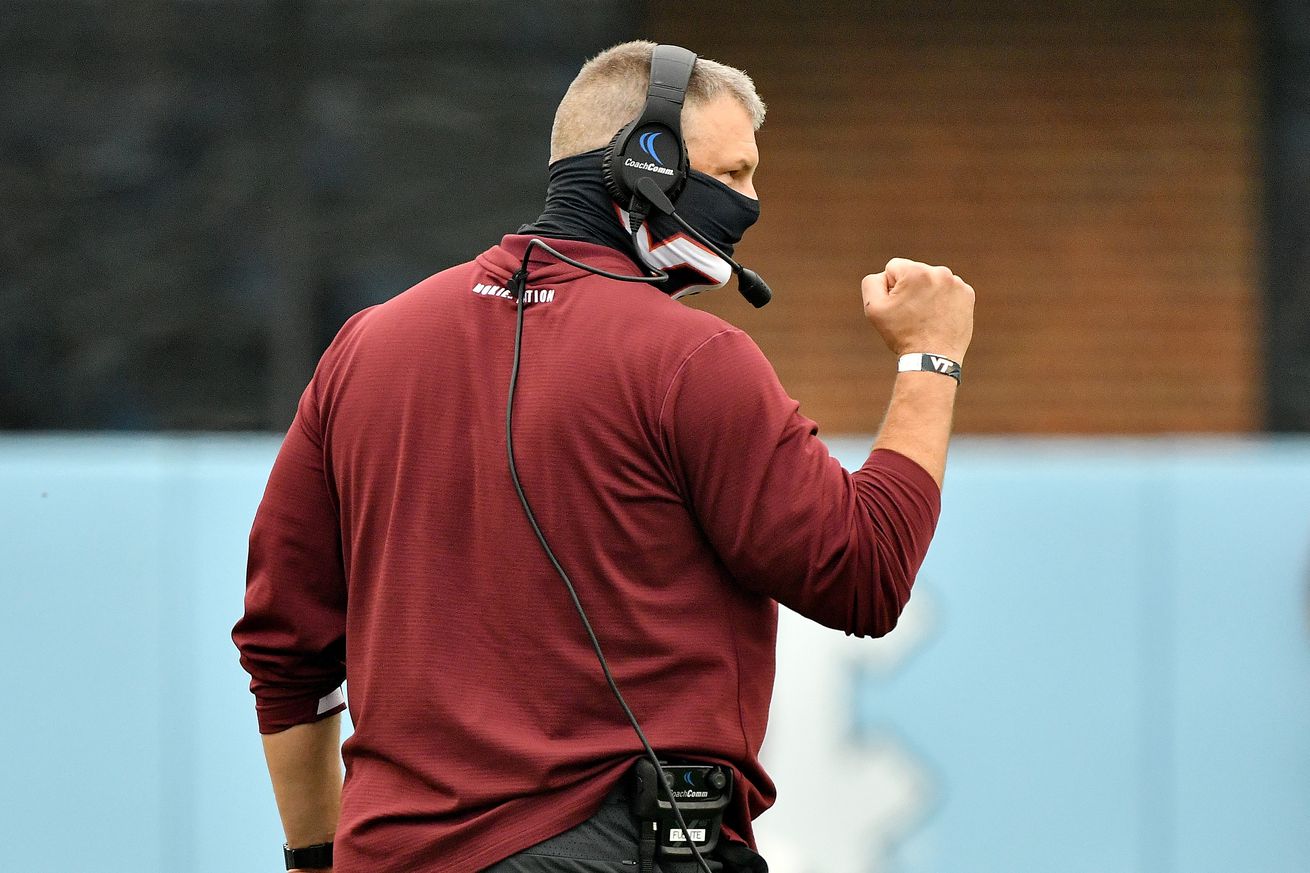 The Miami Hurricanes (6-1) head to Blacksburg, VA to face the Virginia Tech Hokies (4-3) at Lane Stadium. The ‘Canes and Hokies face off on Saturday, November 14th at NOON on ESPN2.

Miami is coming off of a late game comeback win over NC State while the Hokies are reeling from a loss to Liberty. Justin Fuente is on the hot seat but could cut the temperature down with another win over The U. The Hokies are 4-2 against Miami at home since the 2007 season, and Fuente is 2-2 overall against the ‘Canes.

This game should definitely be considered a rivalry dating back to the BIG EAST days and continuing on to the ACC.

The Hokies offense has been putting up 37.7 points per game in 2020, good for 21st of 115 teams at the FBS level. Herndon Hooker is the starting QB for the Hokies. Hooker has completed 63% of his passes for 9.2 yards per attempt, with four touchdowns and three interceptions. Hooker has added 359 rushing yards and seven TD’s on the ground.

Above– Counter read is a tough one to defend. The LB’s will be sucked in by the pulling OL but the Q can pull and run if there’s space from the squeezing DE, and he does. Once in the open field Hooker is a dangerous weapon and teams all over the country have struggled to tackle in this COVID shortened off-season with new contact protocols.

Above– A very King-like run from Hooker on a draw play. Jalean Phillips and Quincy Roche can’t work their way five or six yards up field against a dynamic QB. Bailey Hockman of NCSU and Joey Yellen from Pitt? Sure. But not against Hooker.

It’s not like Hooker didn’t ball out against the Flames. The Hokies QB had nearly 400 total yards, scored four touchdowns, and averaged eight yards per pass and 7.8 yards per rush.

The Flames caught the Hokies without starting RB Khalil Herbert who had rushed for 804 yards (8.3 yards per carry) and six touchdowns and one receiving touchdown, too. Herbert is out with a hamstring injury and could return for the game against the Hurricanes. Herbert is also an electric kick returner and if he’s back, that spells trouble for Coach Patke and the kickoff team.

Above– A lot of H’s and willing blockers from VT and a lot of bad angles from Liberty. Miami has to clean up their pursuit angles and tackling to stop the Hokies run game.

The Hokies do have a few big play threats in the receiving game, including Herbert. Herbert averages 22.8 yards per catch; while James Mitchell, Tayvion Robinson, and Tre Turner average 17.3, 16.7, and 14.9 yards per catch, respectively. That’s a couple of yards per threat better than Miami’s receiving corps.

Above– VT nails in a glance route in the red zone for a TD. We know McCloud et al can’t defend a pass so expect Fuente to dial this up a bunch against Miami.

The Tech O-Line allowed only two hurries and not a single sack or tackle for loss against the Flames on November 7th. Miami has to be able to get to Hooker without a ton of blitz pressure or he’ll pull and run into the void of Bradley Jennings or drop some dimes into the middle of the field between Amari Carter, Gurvan Hall and Bubba Bolden.

Above– A great example of how the VT run game opened up the middle, even without Herbert. Four Flames defenders ran up to play the run and the post was wide open.

Above– You can see a 12 personnel (one running back, two tight end) look from Liberty and the Hokies in their base 4-2-5 defense. The Hokies defense has been giving up 30.5 PPG, good for 67th of 115 teams at the FBS level.

Above– What you can see is Liberty running an insert zone on 4th and 3, and VT being very afraid of a deep ball. The Hokies safety to the four receiver side keeps bailing after the snap and the cutback run hits his alley and easily gets a first down.

Above– D’Eriq King on a little play-action boot to hit Will Mallory in the end zone, sounds good to me.

Linebackers Alan Tisdale and Rayshard Ashby have combined for 86 tackles, 10 TFL’s, and three sacks in 2020. They are the two starting ILB’s in the 4-2-5 scheme.

Above– Right before I talk about the Hokies DB’s I want you to see this really slow double move from the Flames that works. Note to Rhett Lashlee, max protect and get Mike Harley in a 1-on-1 to take advantage of this same thing like you did against NC State.

In the back five, Dorian Strong leads the Hokies with five pass breakups. Brion Murphy and Devine Deablo tie for the team lead with two interceptions. Chamarri Conner has logged 58 tackles, 2.5 TFL’s, and an interception on the season.

Above– Split zone and he walks in for a TD. Miami ran a lot more split zone against NCSU than they had in previous weeks. I’m assuming it was due to the Packs 3-3-5 slant and pressure scheme. Makes it easy to miss a block and clean it up with the H-back.

Justin Fuente has his back against the wall and in the past has always pulled out a big win to secure his job and take his rear end out of the flames (Liberty pun). Can he weather the storm (ok, I’ll stop) on Saturday, November 14th against the ‘Canes? I certainly think so.

My Canyonero keys to victory from the summer were to find space in the VT 4-2-5, stop Hooker from running for big yardage, and to defend the crossing routes you know Fuente is going to dial up against the Baker-Diaz defense. You know those three things are still the keys nearly a dozen weeks into the 2020 season.

Miami has had the luxury of not facing the more mobile of QB’s on teams like NCSU and Pitt, but Hooker is healthy (as of now!) and will be a problem for bad linebacker player and over-aggressive (read: sloppy) defensive end play. If Herbert and Hooker are both healthy, Miami will have to tackle better and that includes Bubba Bolden who is a kill shot or bust tackler.

Re finding holes in the 4-2-5, I was really hoping Lashlee would’ve picked up a few more Air Raid staples after two seasons with Sonny Dykes. Where is stick to Mallory and Jordan (if healthy)? Where is mesh? Run mesh and hit the wheel to Knighton in the 3rd quarter for a big TD.