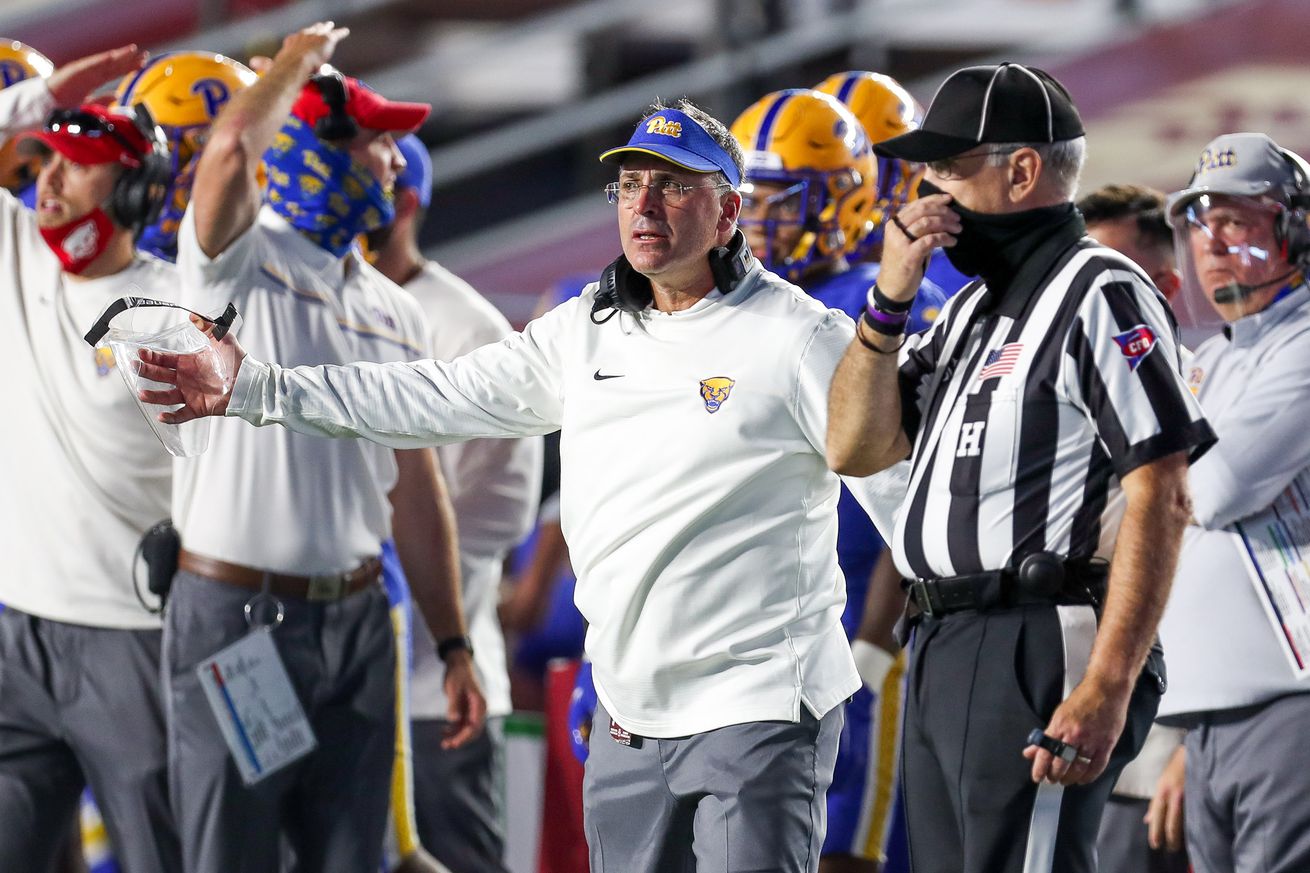 Pitt’s offense is led by senior QB Kenny Pickett. Pickett’s ACC claim to fame was knocking off then 2nd ranked and undefeated Miami in 2017. In 2020, Pickett has thrown for 1,389 yards and eight touchdowns while throwing three interceptions. Pickett averages 7.7 yards per passing attempt, and has ran for five more scores.

The Pitt run game has been atrocious. Vincent Davis leads the team in rushing with 242 yards in five games, averaging only 3.3 yards per carry with three scores.

Above– The Panthers use split zone, one of my favorite concepts, for a big run against BC. When linebackers are reading “cross back” (ie. the top LB in the GIF is reading the RB but the bottom LB is reading the H-Back) split zone can slow down the reads of the linebackers.

Above– Pitt hits the RB in the flat, and after seeing what Travis Etienne did against the Baker-Diaz defense, expect more of the same. The Panthers will attack the flat, Miami’s weakness, in this game.

Pitt does, however, have three explosive receivers. DJ Turner, Taysir Mack and Shocky Jacques-Louis average 18.4, 16.5, and 16.1 yards per catch, respectively. The speedy trio has combined for three TD’s as the Panthers have averaged 31 points per game (35th out of 76 in the nation).

The Panthers are built around their 4-2-5 defense. They’ve allowed only 18.2 PPG (12th of 76 FBS teams) on the season. Narduzzi gonna Narduzzi no matter who he has on his depth chart. He’s been running match 4 (basically man coverage but with the ability to switch off responsibilities) since his days at Michigan State.

Above– The Pitt defender goes Full Isaac Hayes and let’s the receiver “Walk on By” in the red zone. There is absolutely no reason in Narduzzi’s scheme that this dude let that NC State guy go.

Above– NC State runs a favorite concept of mine, split zone. It’s a great way to offset run blitzers and get the most out of a single run play. It’s also easy to tag an RPO onto as there’s no QB run threat which can delay and convolute reads.

The Panthers have a pair of defensive linemen in Patrick Jones II and Rashad Weaver that have each logged 6.5 tackles for loss in ‘20. Jones also leads the team in sacks with seven.

Paris Ford leads the defensive backfield with two interceptions and DB Marquis Williams leads Pitt with three PBU’s. The leading tacklers are Ford and linebacker Sirvocea Dennis who have 27 and 29 total tackles, respectively.

Above– Miami needs a dude that can catch these balls. Sometimes you have to just let up a deep ball and have your WR come down with it. Phil Longo at UNC, Clemson and Tony Elliott, and even Dave Patenaude and the iffy Jackets offense can go up and get it.

Pitt’s kicker is only 7-of-12 on field goals but as Cam would say he’s gonna make ‘em all against Miami…. NOT SO FAST MY SLAPPIES. Miami finally 1- made a kicker miss and 2- BLOCKED A FG AND 3- SCOOPED AND SCORED!!! Good job Coach Patke, until his new punt returner dropped one, too.

My Canyonero keys to victory were to protect the QB, cover crossing routes, and to attack space against a 4-2-5 basically man coverage defense. Deeper now into the 2020 season (that was written in the summer) I think we can say the keys are to defend crossers and the flats, secure 3rd and long, and keep someone like Pickett from making chicken salad from chicken poop.

Miami should always be able to beat Pitt. But Rhett Lashlee needs to avoid being too vanilla, which he has been up to date, and Baker-Diaz have to keep Pickett from making his D-rate Brett Favre plays which result in busted coverages and big gains.

Pitt shouldn’t score against Miami, but the ‘Canes have to stop allowing so many big plays. Miami has to lock down their punt return issues, get more from the kick returners, and run D’Eriq King more often!