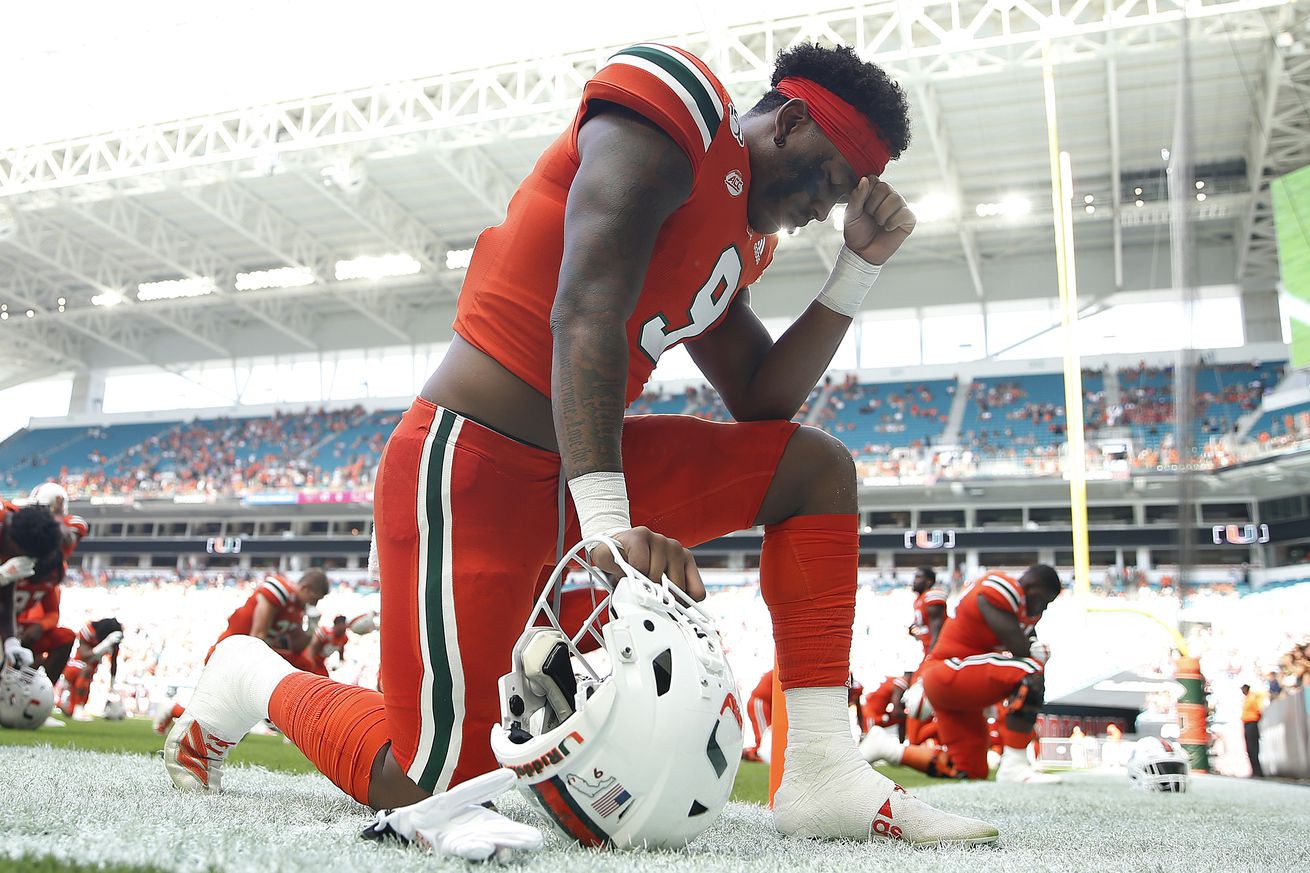 ‘Canes come from behind again, top Hokies at Lane Stadium.

The Miami Hurricanes hit the road, again, and beat their opponent in a come-from-behind thrilling fashion. Last week it was the NCSU Wolfpack, this week the Virginia Tech Hokies. The ‘Canes edged the Hokies 25-24 at Lane Stadium on Saturday, November 14th, as COVID-19 nearly cost Miami the game before it started.

The Hurricanes coaches overcame over a dozen players who were held out of action because of COVID. One position hit hard by the virus was the offensive line. Garin Justice did what he could do to put a competitive group on the field but The U allowed six sacks, eight tackles for loss and seven hurries against the Hokies while still struggling to get a solid run game going.

The bad? Eight penalties for 77 yards compared to Va Tech’s two for 10 yards. The good? The defense came away with six sacks, 11 TFL’s, two PBU’s and two hurries of their own.

The offense allowed six sacks, 8 TFL’s, and seven hurries, only averaged 6.7 yards per pass attempt, 2.7 yards per carry- AND STILL WON THE GAME. Two explosive receptions, one from Dee Wiggins and one from Mark Pope, kept Miami alive and lead to the victory. That plus Jose Borregales finishing 2-for-2 on field goals and making his lone PAT attempt. Lou Hedley kept the Hokies from starting with good field position, too.

My dude DJ Scaife had a rough going at right guard. He uses the one arm technique on the pass rush, which is very common in 2020. The arm isn’t the issue, it’s his base. His legs are far too spread apart, and his back leg is too far back to sustain an inside rush. Which is what he gets.

Below– Pass protection doesn’t have to be passive. I’m not sure why people assume that. Drive-catch, keep your outside knee aligned in the DL’s crotch, when he moves inside, you step into him and run block him into the center. Done. This more passive approach of posting him up with one hand gets Scaife abused.

Below– Great play by the right tackle here in a one-on-one with no help. He keeps the pass rusher working outside, at length, and doesn’t allow him to work back inside. It gives D’Eriq King time to drop this dime which sets up a scoring opportunity.

Below– this is why I’ve wanted a quarterback that is athletic here for years. When the play call doesn’t work, or the O-Line protection breaks down, guys like King with leadership and talent will show Mental Toughness. MT is the ability to stay focused and accomplish the mission while under duress.

Below– Miami uses max protection (RB and TE stay in to block as part of the scheme). This gives King plenty of time, and he hits an NFL caliber throw here on the deep out.

Below– Miami scores on split zone, my absolute favorite run concept in football. Split zone is a Day One install for me at any program. The H coming across the formation can pick up any unblocked defender, if the line does its job (as it does) he can kick out the defensive end, and the back has the option to stay front side or cut back to the back side. It’s counter without the pulling linemen which is less of a ‘tell’ for the LB’ers.

Outside of a mobile quarterback, the other thing clueless fans have complained about is the use of Run Pass Options, or RPO’s. Usually citing Jon Gruden’s stupid show with Brad Kaaya. Well, Gruden is using them with the Las Vegas Raiders in 2020, and so is Lashlee at Miami (as well as Lane Kiffin, Mario Cristobal, Phil Longo, and every other good or great OC in college ball).

Above– Watch the LB circle above. When he commits hard to the run and is at the LOS as King meshes with Don Chaney, King pulls and hits the glance rout for a TD. There is no safety in the middle of the field to stop the touchdown from happening (below)

For all of the film these college coaches watch up there, to not figure out that 1- Jaelan Phillips is coming inside on a pass rush and 2- that Miami is going to run a stunt on 3rd down… well…. I’m not sure if the analysts’ time couldn’t be better spent cleaning the locker room to cut down on COVID-19 exposure.

Above– It’s 3rd down, empty back field, Phillips comes inside (duh) and the defensive tackle stunts slower than some of you guys struggling to get off the couch. It results in a really big sack in the 1st quarter and starts the game off fast for Phillips. I like seeing him use a move, the swim, especially at his length. Rule one on a swim move is to punch the guy in the kidney but the VT O-Line is extremely passive in pass pro.

Above– you can see absolutely perfect blocking on power read. VT runs this really well here for a 53-yard TD. The question for their idiot staff is WHY DID YOU ONLY RUN THIS LIKE ONCE!? Good for Miami, bad for them. Phillips gets exposed here. The play is designed to conflict the play-side DE, he’s the read. If the DE plays the RB going outside, the QB pulls and keeps. If the DE plays the QB (squeezes inside) the QB gives to the RB.

Above– Phillips slow plays it but can’t regain his balance and winds up taking a wild lunge at the QB. The safety doesn’t show and the rest of the play is wide open for Herndon Hooker to run a TD.

Above– I realize this is blurry (it’s ok BigDaddyCane, you’ll survive) but that player, with nothing between himself and a touchdown but a referee, is Bubba Bolden. His pursuit, and pride in finishing has been really really bad the last few weeks. I’m not sure if he’s injured, heard he has high draft stock and is mailing it in, or has lost confidence in finishing the play- but wow.

Above– You’re seeing a classic QB sweep right out of the Philadelphia Eagles playbook in Tecmo Super Bowl starring “QB Eagles.” It’s an old school Singlewing play from the days of 16mm film and even more racial inequality (hard to imagine, right?).

The ‘Canes are lined up wrong from the jump. There’s a TE to the top of the formation, but the MLB (Jennings I believe) is lined up in a 00 (head up on the center, LB depth) instead of a 30. This gives the TE easy leverage. The TE is also not engaged by anyone, so he has a free release to ‘block some bodeeee.’

With the outside force player being off the ball, the DE needs to jam the TE in order to keep the TE from either 1- double teaming him or 2- working free to the 2nd level (LB’s). I’m not sure where the safety is to that side but dude doesn’t show up in the picture any time soon. He should be the “alley player” or the guy who runs to the ball, directly between the force guy and the inside-out linebacker.

Same Side- Inside Zone

Above– In the red zone, Miami struggles to get lined up on time. Below– It leads to a touchdown run.

Above– The more shocking part is how poorly of technique Gurvan Hall uses to tackle the back here. He lowers down, puts his head across the body, and damn near gets decapitated.

Above– The world of football has been teaching to track that near hip, and shoulder tackle with your head behind the ball carrier for almost a decade.

Below– I have no idea why the safety throws himself into the offensive lineman when he’s the alley player. The CB should be doing that if anyone should.

Miami went on the road, two weeks in a row, and won a come from behind game. Should the ‘Canes have ever been behind on these two meh teams? Probably not. But hey, they got behind, pulled it together, didn’t quit, and won the damn game. Enjoy it, fans.

Georgia Tech is bad, Wake Forest and UNC are playing bad defense but are putting up 40+ points per game. Expect the Yellow Jackets to make the game slow and plodding. And then the following two weeks both the Deacons and Tar Heels will open it up and try to put 100 on the board.