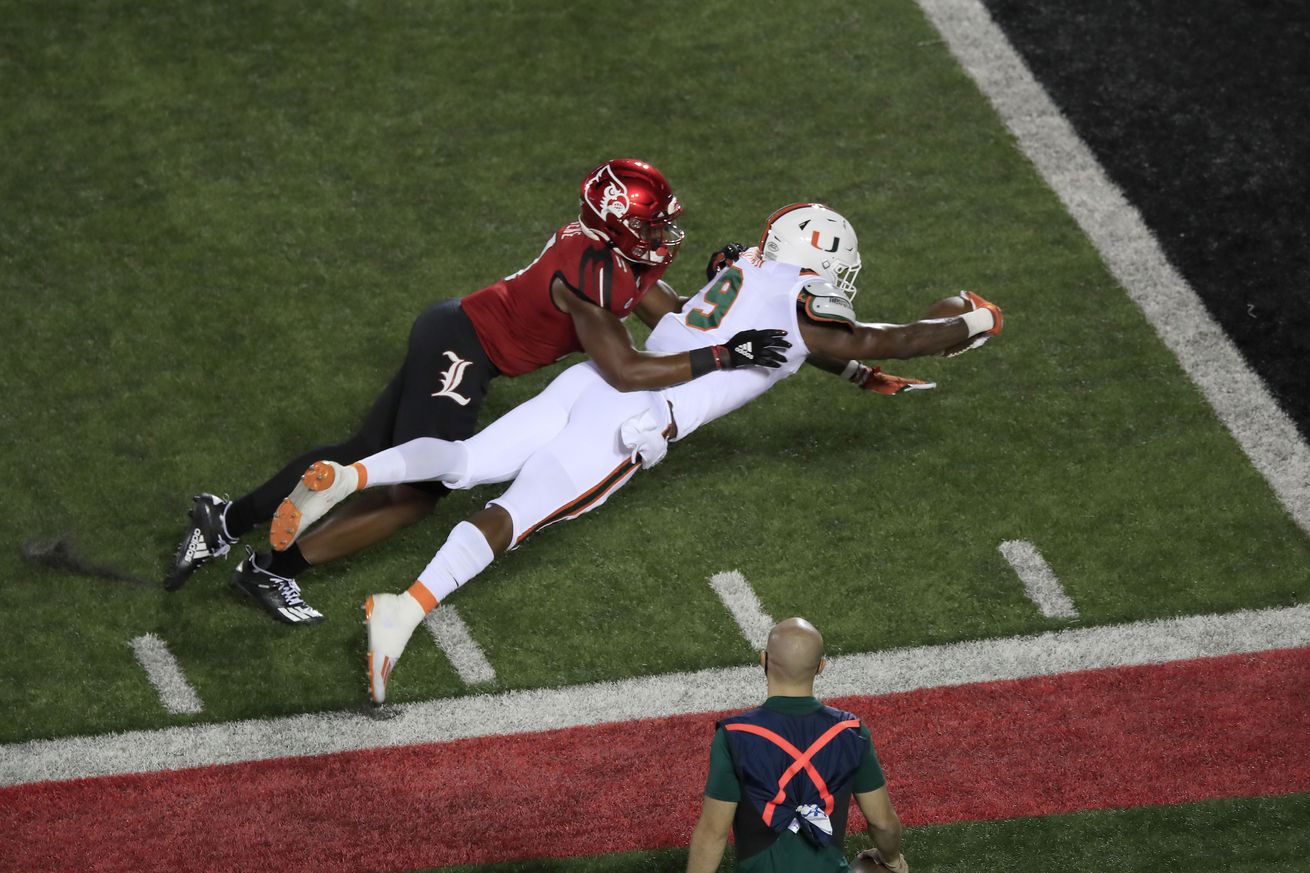 Miami headed north into Papa John’s country to win a shootout with the Louisville Cardinals on Saturday, September 19th in primetime. The ‘Canes edge the Cards 47-34 on explosive plays and break-neck tempo drives. Miami offensive coordinator Rhett Lashlee guided the Hurricanes to 485 total yards in only 21 minutes and 59 seconds in time of possession.

This is why something like time of possession really doesn’t matter, Miami didn’t need a ton of time to put up 47 on a bad defense. An old coaching adage is the offense should never wait for the defense to get lined up, just snap the ball!

‘But what about the running game…’ well old timers, Cam’Ron Harris totaled only nine carries, for 134 yards- an outrageous 14.9 yards per carry, and a touchdown. Harris broke another explosive touchdown with a 75-yard burst this week, after a 66-yard run in Week 1.

The Run Pass Option or “RPO” is a deadly weapon.

Above, you can see the way Louisville lines up to Miami. The Cards are basically in a 4-3 defense with two safeties very deep on the play. You can see neither safety pre-snap but they are lined up on opposite hash marks. To the top, there’s three defenders over two. Using the RPO keeps defenses honest, they can’t load the box too much or you’ll burn them with a bubble.

Above- this is why coaches like read option plays with mobile QB’s. Louisville is now at a disadvantage. King’s ability to run eliminates their linebacker from making a play on the running back.

Above- The RPO slows down the linebackers. They’re completely flat footed and unable to get their body moving again in time. The right guard picks off the linebacker and Harris does the rest.

Once Harris got cooking the RPO passing game broke open. Brevin Jordan and Mallory on the field together… what a sight!

Safeties have crept up, the box is getting tighter, no one is on Jordan and he explodes for a big gain on a simple bubble screen. Let your athletes do athlete things. Give your offense a chance to make plays. Lashlee is doing just that with the QB, RB position, tight ends… it’s happening against a good UAB defense and a bad Louisville one but still, it’s happening.

D’Eriq King improved 10-fold in Week 2. King averaged 10.8 yards per attempt with three touchdowns. He connected with with tight end Brevin Jordan seven times for 120 yards (17.1 yards per catch) and a touchdown. True freshman Jaylan Knighton scored on a 75-yard touchdown pass and also on the ground. Will Mallory proved why two tight end sets for Miami should become the norm, he hauled in a 17-yard touchdown, too.

Miami only allowed one sack and three hurries. Garin Justice is proving his worth already. Again, not the best defense in the world there from Louisville, but such an improvement over what Dan Enos was doing against say…. Central Michigan only a year ago.

One data point I liked seeing was Miami converting on 6-of-13 3rd downs, while holding Louisville to 4-of-14. But The U’s vaunted defense, ran by Blake Baker, gave up three-of-four fourth down conversions, 516 total yards and 34 points. Miami did break out the turnover chain as Louisville turned the football over three times to Miami’s zero.

Penalties were way up for Miami from a week ago. The ‘Canes committed 11 penalties for 89 yards which can be back breaking against a better all-around program (see: Clemson, UNC).

Above- Did Miami need to blitz like crazy to get back to the QB? Nope. Above they get to Cunningham with a four man rush. The linebackers only come when the running backs are in max protection. It’s a delayed blitz based on coverage responsibilities, which can kill you against a RB middle screen or a QB that can get outside of the pocket, but Cunningham can’t right here and is met in the middle.

Places to clean up the defense

Above- Defense is supposed to be played on a chain. Imagine having a chain hooking the hip of all of the defenders. If the middle linebacker runs to the left he’s going to drag that other linebacker. LB’s are supposed to play with their shoulders to the line of scrimmage, scallup (scrape and gallup) is okay, and scrape is fine, but turn and sprint is not okay. It opens cut back lanes and it is really hard bio-mechanically to completely change direction once your hips are turned.

The three guys with the yellow arrow should be mandatory cutback players. They have to stay low, slow and ‘slow-play’ the run away. “To” “At” “Away” is how I always taught it. To is towards my side but not into my chest. At is directly at me. And away is to the other side. To I scallup, at I close down hard, away I scrape and slow play.

Above- you can see Quincy Roche completely taking the play off. He’s standing straight up, walking, this is no good. The defensive tackle is sprinting full steam ahead and won’t be useful in any cutback at all.

Above- the result is above in the screenshot and below in the GIF. This kind of stuff has plagued Diaz and Baker. The linebackers never look like they know what they’re doing, and the pursuit angles are terrible. Amari Carter runs through the entire play, then tries to chase from behind, and all of the over running gets everyone gassed and out of position. By the end of the run Roche and Nesta Silvera are walking.

Above- I’m not sure how Keontra Smith, Bradley Jennings Jr, and Ryan Ragone all wound up in the game at the same time, but this is what happens when guys who don’t know how (Smith) and can’t (Ragone) wind up on the field together. I have never been a wholesale shift change guy. Smith wants nothing to do with contact here, Jennings gets blocked for 20 yards, and Ragone can’t make the play physically. Again, it’s all ‘turn and run’ there’s no scallup and all shoulders wind up to the sideline instead of the backfield. Nice ballet move by Smith, though.

One key point I offered in my film preview was that Miami had to limit Malik Cunningham’s running ability. The defense did just that holding him to 10 runs for seven yards (includes sacks). But Cunningham did get his and Tutu Atwell did as well. Cunningham average 8.5 yards per attempt with three touchdowns and one interception. Atwell caught eight balls for 114 yards (14.9 yards per catch) and a score.

Miami is going to have to improve in a few areas in order to beat the heavyweights like Clemson. Miami has to pursue the football better on defense, both in the run and the pass. Travis Etienne and Trevor Lawrence will carve up defenders who don’t play good football.

On offense the pressures were down, King had more time, and that’s a great thing. King was more efficient and Miami was a big strike team. That’s great stuff to see. The lack of turnovers and the 3rd down conversions being up was great too.

There are a few effort things to clean up and Miami needs to dip the penalties back down, but I saw improvement in certain areas and that’s never bad. It’s FSU week. Let’s go.