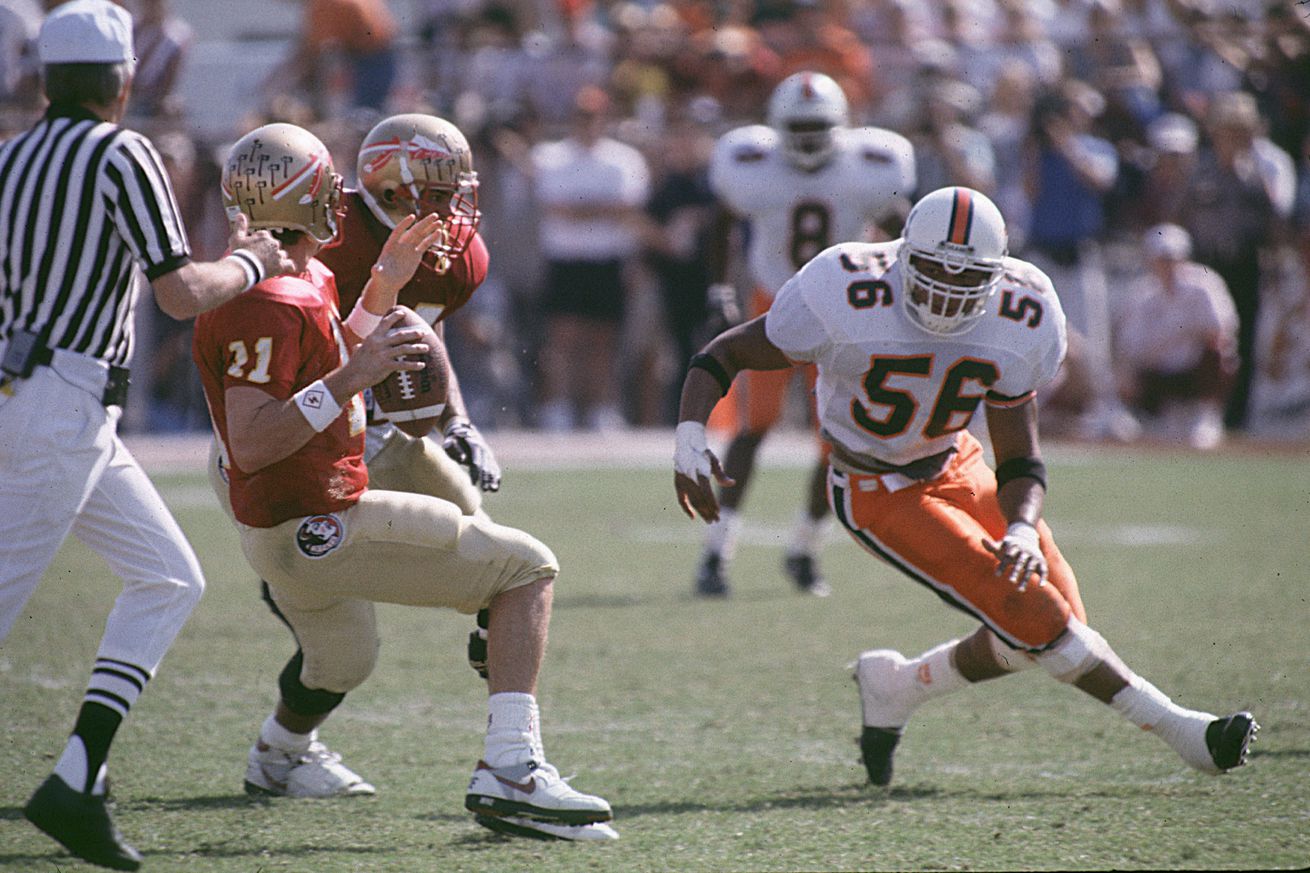 The Miami Hurricanes demolished the FSU Seminoles Saturday night on primetime national TV. With FSU head coach Mike Norvell at home after testing positive for COVID-19, and Kirk Herbstreit calling the game from home- it was as 2020 as it gets. But to continue a sense of normalcy is Miami beating the ‘Noles, as they have for four straight years.

Offensive Coordinator Rhett Lashlee rolled up 52 points against FSU making him a household name behind the arm and timely legs of QB D’Eriq King. King only averged 6.7 yards per passing attempt but tossed two touchdowns and again, did not turn the football over. On the ground, King added another 65 rushing yards which was good for 8.1 yards per carry.

The U put four running backs in the rotation against the ‘Noles, and the Hurricanes totaled 200 rushing yards, four touchdowns on the ground, and averaged 5.4 yards per carry as a team. True freshman Don Chaney Jr. ran for two bruising scores as he showed all of his 210 pound frame off Saturday night. Jaylan Knighton had big plays of 16 and 18 yards showing that Miami has a solid 1-2 punch of power and speed for into 2022.

The idea of space, attacking holes in the defense, making the game basketball on grass- those are Air Raid staples. Above– Miami creates space for Brevin Jordan in variety of ways. The slot on the other side of the formation runs an out, which will take a safety over the outside receiver and the LB and CB down on the out. On Jordan’s side, the swing will draw either a linebacker or nickel while the outside WR pushing vertically should hold his CB, and Jordan just has to shake the safety to his side.

Above– Here’s the GIF of the Jordan touchdown. It looks like FSU put a safety over the outside WR to his side, and rotated a safety down into the box. This created a massive hole in the middle of the field that D’Eriq King just needed a touch pass to drop the ball over the linebacker and enough force on the ball to have it fall to Jordan before a defender could recover. And he does. Because King has grown more comfortable each week at Miami.

Above– Why do smart coaches like Mr. Lashlee like RPO’s? Because when a defense is late to rotate, or decides to put 3 safeties between the hashes, the QB can take over the game and do what he needs to do in order to attack the given space. The leverage between the FSU CB and the Miami stacked twins is massive.

After an RPO works is where the magic is. Once a QB connects on a screen teams will get frustrated giving up easy chunks of 4-5 yards to wide receivers. Then they decide to lock up 2-3 defenders over that area and it creates a box that’s more run-friendly. OC’s want to run (unless they’re Mike Leach) and Lashlee comes from the Gus Malzahn tree of run-run-run again.

Above– You can see the evidence of what an RPO does to a defense. FSU has to pay special attention to the slot WR on the top of the screen. They also have to mind King’s ability to run. Two defenders play King’s pull-side (top) of the formation. This leaves a massive hole where Cam’Ron Harris only has one linebacker to beat, and the offensive line works up to him just in time and it’s- “Touchdown Miami!”

On defense, Miami surrendered a handful of explosive plays. But all in all, they ‘Canes made enough explosive plays of their own to dominate the FSU offense. The U came away with six sacks, 13 tackles for loss, and seven QB hurries on the night to go with their three turnovers. The defense held FSU to 4.8 yards per passing attempt with one touchdown, three interceptions and only 4.2 yards per rush with no scores.

Nit-picky- At one point, DC Blake Baker dialed up a line twist inside the red zone on 1st and 10. I have never liked twisting defensive linemen on obvious run downs in obvious run situations. I believe it set up the FSU field goal early in the ballgame.

Above– Coach Baker relies on pressure to get after James Blackman. It seems unnecessary, as FSU couldn’t protect against a three or four man rush. But Baker and Coach Diaz love to blitz. If you look at the middle of the clip- the middle of the field is wide open. FSU just dials up a bad play call that leaves only a ref in a 25×10 yard space. Clemson won’t be so kind.

Above– This is what you can expect from Clemson QB Trevor Lawrence. He’s more athletic than people give him credit for (think: Justin Herbert) and will take advantage of massive open spaces in the defense. Baker blitzes himself into trouble and the QB takes off.

Remember all of those “What college coaches look for in X” posts I ran early on in the COVID hiatus? I wrote one about the defensive line and when it comes to modern defensive ends- quickness of the snap (first two steps), lateral quickness, and of course size (read: length) are vital in the Power 5. Jalean Phillips wastes a ton of energy with inefficient movements and always playing really deep up field (needs to learn to settle at 1.5 yards on runs, obvious screens) but being aggressive pays off below for Miami.

As a team, Miami has a few mistakes to clean up. The ‘Canes were called for targeting, fumbled the ball four times (losing two), and struggled in the punt return game once again. But the positive takeaways were finishing 11-of-16 on 3rd downs as an offense, also 3-of-4 on 4th downs as an offense, and on defense- holding FSU to 0-for-2 on 4th downs. The ‘Canes committed eight penalties to FSU’s 12. Cut down the penalties, drops and turnovers ASAP if you want to beat Dabo Swinney’s Tigers.

If Miami wants to unseat Clemson as the top dog in the ACC, some of the mistakes are going to have to be cleaned up. You beat a bad FSU team with fumbles, penalties, and drops. You cannot beat Clemson with that sort of game. Even nearly flawless performances, like UNC’s in 2019, wind up with the Tigers coming out on top.

This is the time to see the growth in Manny Diaz as a head coach. It’s a dreaded idle week coming off of a massive victory over your rival in FSU. Can Miami make the most of the week off, stay focused, prepare for Clemson, and come out as hot as they have in 2020 in a “limited attendance” Death Valley?