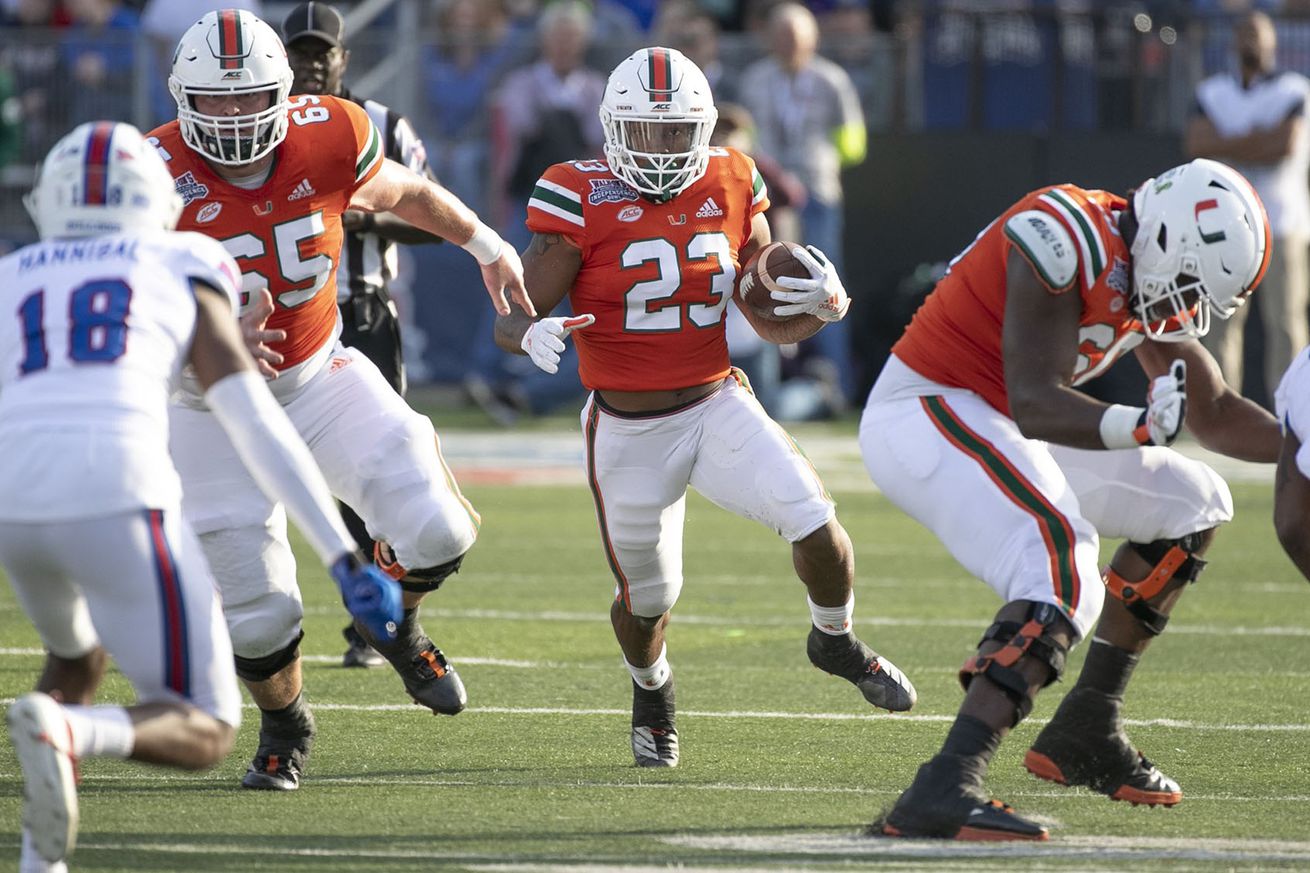 The ‘Canes outlasted the Blazers to open Miami’s season 1-0.

The Miami Hurricanes outlasted the UAB Blazers on Friday, September 10th by a final score of 31-14. The game was tight until a 17 point 3rd quarter blew the doors open to a cruise control finish for The U.

The star of the game for Miami wasn’t Rhett Lashlee’s play calling or D’Eriq King’s arm- it was Cam’Ron Harris ripping off 134 yards on 17 carries and two scores, including a 66-yard touchdown run with no Blazers in sight to tie the game at 7-7.

Harris is an ideal zone running back. Watch him use all of the RB coaching points in the zone: he works slow to the hole and fast through the hole, he doesn’t dance, it’s a cut and go with his eyes up and his shoulders square to the line of scrimmage. I absolutely loved this play for more than the result.

Harris took a shot to the leg in the second half and hopefully is okay. But if you were worried about freshmen stepping up, Jaylan Knighton and Don Chaney averaged 6.6 and 6.5 yards per carry, respectively, in their first ever college duty.

As a coach, I look for certain data points to see if a program is maturing from season to season. One thing I loved to see was Miami committed only three penalties all night compared to UAB’s 11. Those 11 UAB penalties cost the Blazers their chance at a major upset.

One thing I was disappointed in was the return game. Mark Pope averaged 20.5 yards per kick return, which is a good number, but the punt return fumble that set up UAB’s first score left a lot to be desired. Placekicker Jose Borregales finished 4-for-4 on PAT’s and 1-for-1 on field goals, so an improvement was made there.

When I look through box scores at the end of a game there are things I want to see from both sides of the ball for Miami.

Yes, I’m this petty. For years I’ve been preaching that Miami needs to utilize a mobile quarterback. The old farts and young guys who want to be old farts have said, “No! Gino ran just enough for me!” Well, the game has changed. Defenders are so athletic and cover space so much quicker than in 1991 that the QB has to be able to make things happen. When the protection breaks down (which it did, a lot) King was able to make something happen.

It wasn’t just King’s legs. While he struggled passing at times he shows the touch on the move here Miami hasn’t seen since… Steve Walsh? I should leave this to our QB Guru Roman but the release point, the placement, the touch… it’s a thing of beauty.

I also look to see if more than one receiver has double-digit yards per catch. Miami pulled this off, too, with Brevin Jordan averaging 17 yards per catch plus a touchdown, and Jeremiah Payton catching one ball for 13 yards. Offenses need explosive plays in order to work. If the drive has two or more explosive plays the O is almost guaranteed to score. One explosive play still keeps the numbers high. Less than one and you’re more than likely punting or settling for a long field goal attempt.

On defense, I’m typically not looking at tackling numbers. Those are great and all, but they’re often inflated by ‘pile on points’ (guys jumping on a pile). What I look for are tackles for loss, sacks, passes defensed, hurries, and forced fumbles. Most of those data points make up “havoc stats” which is a phrase coined I believe by Manny Diaz and taken and ran with by Bill Connelly.

Above- Gilbert Frierson has no place on my football field with his effort on UAB’s second touchdown run. He makes no attempt to disengage from his block, has no fight to him, and all around seems uninterested in contact. How is he at a linebacker position with that little of desire in him?

I was happy to see Jalean Phillips survive his first game back from injuries, retirement and transferring. He picked up half of a TFL, two PD’s and a hurry. A couple of things he does well are find the football in the air, and give relentless effort. He’s obviously weak at the point of attack, and wastes a ton of energy engaging the blocker with both hands square in his chest, as opposed to hitting a small aiming point and taking over the play. Quincy Roche logged a sack and TFL, too.

Both D.J. Ivey and Te’Cory Couch looked lost in coverage at times. Myron Mitchell made quick work of the ‘other’ cornerbacks grabbing eight balls for 117 yards and a score. Five Blazers broke double-digit receiving averages, but UAB only averaged 5.9 yards per pass attempt and 3.1 yards per carry. Hey, but Austin Watkins was a NON-FACTOR which was a key to success heading into this game.

Kudos to Blake Baker for mostly staying vanilla and letting his defense play. When he did dial up the blitz, Miami got smoked by UAB (penalties and drops negated a few wide open explosive plays). I’m hoping Diaz-Baker decide to just let the athletes run and to stop blitzing. Pass rush shouldn’t be an issue with Phillips and Roche.

1- I saw fans clamoring for more “creativity” on offense which:

A- A smart OC isn’t going to do against UAB when they have Louisville coming up next.

B- Is really hard to do when you’re trying to go that fast.

C- You can be creative week-to-week, but drive-to-drive or play-to-play it just can’t happen.

D- I told you about sacrificing some fun and polish for tempo when Lashlee was hired on. If you’re expecting the prettiest offense in the world it won’t happen at that speed. Go watch an SMU game from last year. Watch Auburn under Gus Malzahn for a decade.

2- I loved the lack of penalties that Miami committed. It shows maturity and improved coaching focus on the small things.

3- There were too many big plays or near big plays for UAB that an ACC offensive squad like Clemson, UNC and Louisville don’t miss on.

4- The pass protection from the O-Line leaves a lot to be desired. There were some missed reads by the center that resulted in up the middle pressure which is inexcusable.

5- We saw flashes of what can be, and what used to be, let’s hope that with more time we get a lot more of the future and less of the past.

6- It was the opener after a really strange off-season. It was going to be sloppy, and guys were going to be blowed up (read: tired). Next week needs to look even better.

ENJOY THE WIN, THEY AREN’T GUARANTEED AT MIAMI ANYMORE.