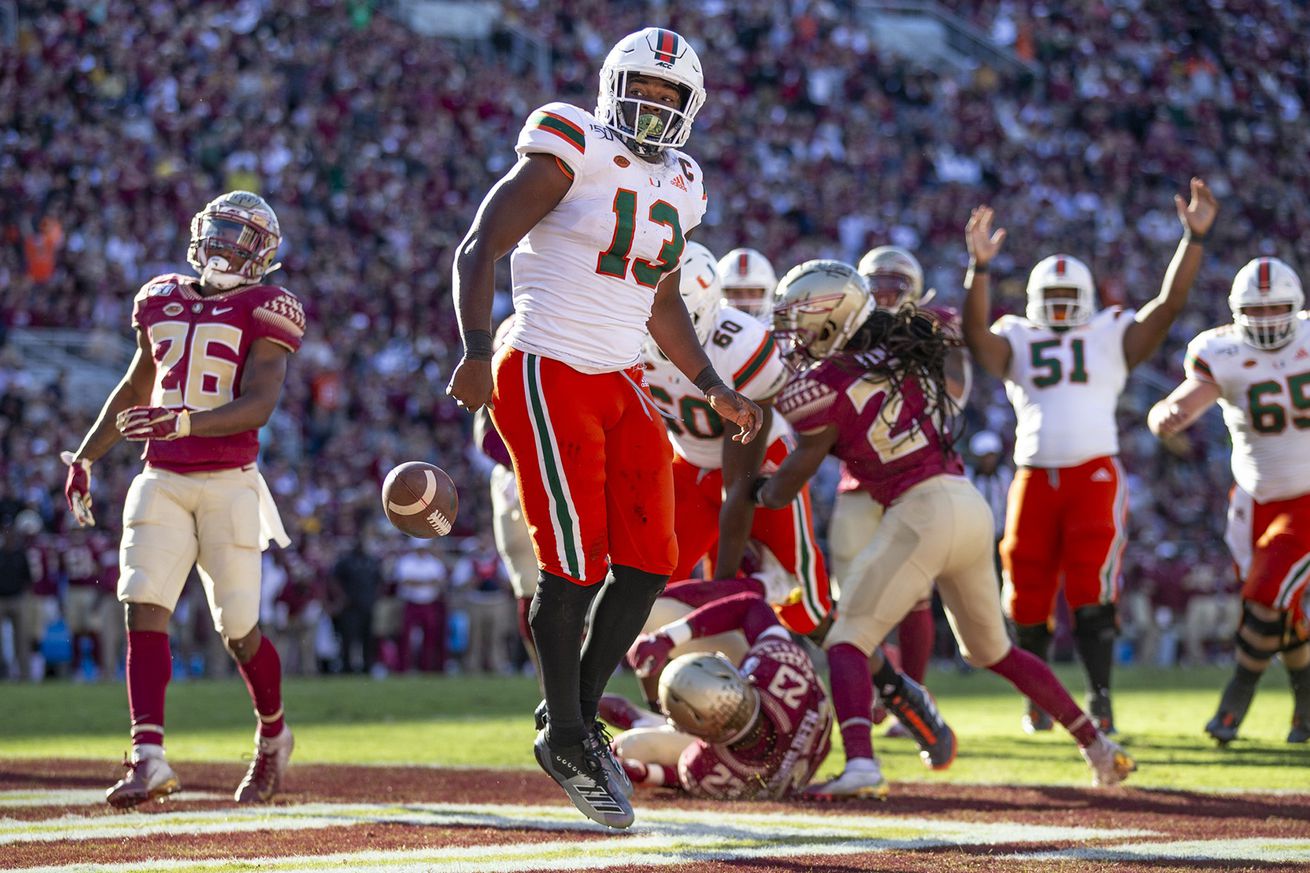 An in-state rivalry takes place this week, and another team’s season finally kicks off.

Miami and UCF were the standout teams in the Sunshine State last week. The Knights got a blowout road win over the Georgia Tech Yellow Jackets to move to 1-0 on the season. Meanwhile, the Hurricanes took care of business in a top-20 matchup on the road, winning 47-34 over then No.18 Louisville.

Florida and the rest of the SEC get their season underway this weekend. The Gators have had some coronavirus struggles in the last few weeks. Yesterday, UF reported three new coronavirus cases among the football team, brining the total for the program up to 7 in the last two weeks. The game this weekend doesn’t appear to be in immediate danger of being postponed, but that’s certainly possible later in the week.

On the field UF could face an early challenge at Ole Miss in Lane Kiffin’s debut. Things could get more difficult if any of the seven infected players are major pieces of UF’s offense or defense.

UCF is in pursuit of the College Football Playoff, and they did nothing but help their chances this weekend. A 49-21 final score over Georgia Tech is a little kind to the Knights, who found themselves in a one possession game in the fourth quarter, but UCF pulled away late for an emphatic win.

Now, UCF begins a conference schedule that starts with two games they should dominate against East Carolina and Tulsa, but features ranked matchups against No.17 Memphis and No.14 Cincinnati that could determine the AAC later in the year.

Miami got a statement win in primetime last week, winning by two possessions over a talented Louisville team. The Hurricanes have some defensive issues to work on this week ahead of a rivalry matchup with Florida State, but it finally looks like Miami has an offense. QB D’Eriq King was absolutely fantastic in the win, and RB Cam’Ron Harris had another good day running the football.

This week should present an interesting challenge for the Hurricanes. The pressure is all on Miami in a rivalry game with Florida State that will see the Hurricanes get College Gameday and primetime treatment two weekends in a row.

Florida Atlantic saw their season opener postponed last week after a series of positive tests interrupted practice and left the Owls unable to play. This weekend, FAU will face a challenge against what appears to be an improved USF team. It’ll be a good matchup that will show where Willie Taggart has his team ahead of conference play.

FAU should be a contender in the East Division of the C-USA, but they’ll have to catchup, with most of the rest of the teams in the conference having already played a game.

Florida State will be without Head Coach Mike Norvell this weekend when they take on rival Miami at Hard Rock Stadium. The coach tested positive for coronavirus, leaving a team that scored just 13 points in their first game against Georgia Tech without their play-caller this weekend. On defense, FSU will have to find a way to stop D’Eriq King and the rest of the Hurricanes’ offense after allowing 438 yards to Georgia Tech and freshman QB Jeff Sims in the first week of the season. This rivalry game is seemingly always close, and FSU will look to knock off a Miami team that is feeling great after a win over Louisville last week.

The rest of the season for FSU is about settling into the Norvell era and showing improvement each week. They’ll look to get a good start to that this weekend.

Florida International finally gets their season underway this weekend on the road at Liberty after two postponements. Liberty is a solid team and rough road challenge for the Panthers, especially in their first game of the season.

Like FAU, FIU will be hoping to get into the rhythm of the season before they get ready for C-USA conference play in just a few weeks.

South Florida looked overwhelmed by Notre Dame last week in South Bend. USF gained just 231 yards in the game and struggled the entire afternoon. The Bulls are certainly improving, but there is clearly still a long way to go.

This week, USF faces off with FAU in an in-state matchup. It’s a good chance at a solid, road-win for Jeff Scott’s team ahead of the start of conference play.

A few in-state matchups and the rest of the state taking the field could see these rankings change a bit next week.