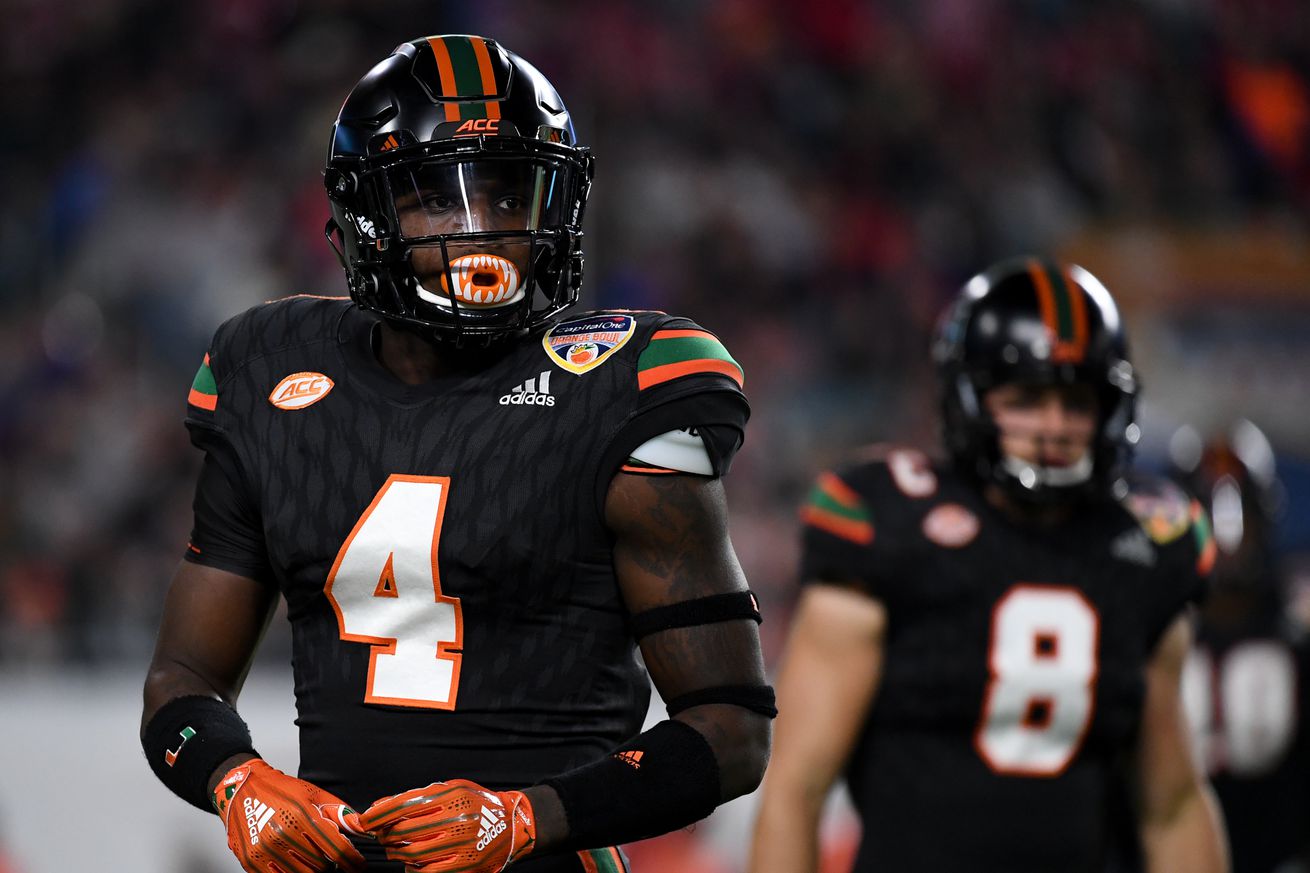 One of the most intriguing NFL rookies for this upcoming season just so happens to be a former Cane who ended up going undrafted in the 2020 Draft, which can mostly be attributed to off-the-field issues. And, this far into fall camp, former Miami WR, Jeff Thomas, remains a mystery at the New England Patriots practices as he has missed a total of six practices. However, the mystery may have been resolved on Thursday after Thomas stood out at practice.

With NFL camps starting last week, Thomas missed his first three practices at the NFL level and there was no indication as to whether this was injury-related or something else. For what it’s worth, Thomas was wearing a compression sleeve on his leg while spotted at practice and does have a young daughter.

But, based on a past that is riddled with controversy, it would not unreasonable for one to suspect that Thomas was having difficulty acclimating to the Patriots Way. This is especially true because former undrafted free agent and second-year Patriots WR, Jakobi Meyers stated in a press conference, “I think Jeff is a great guy, but I don’t really personally want to speak for other people. I just want to let Jeff speak for Jeff.” Due to the limited clarity on the situation, those familiar with Thomas’ tenure with the Canes have reason to speculate why he missed the practices.

Asked Jakobi Meyers, a former UDFA, about Jeff Thomas, who we haven’t seen on the field yet: “I think Jeff is a great guy, but I don’t really personally want to speak for other people. I just want to let Jeff speak for Jeff.” pic.twitter.com/qGb8W05qZH

Things appeared slightly more optimistic for Thomas when he made his debut on August 20th and was also present the following day, but in both appearances he was limited in participation. In those two practices, he was only targeted once and ran the wrong route, which is not uncommon for rookies, but is not an ideal look for Thomas who needs to make the most out of every opportunity. Granted, Thomas did look strong in the WR drills.

The optimism came to a halt after August 21st as Thomas then missed another three consecutive practices. There were reports of numerous false positive tests across NFL camps, so some suspected that may have been the cause of additional absences across the league. Thomas returned to practice on Wednesday and was a full participant for the first time in camp. It was also noted that he wore a compression sleeve on his leg, which may singlehandedly explain why he has been missing, possibly due to a lingering injury. Regardless, based on his history at Miami, it made sense to question if Thomas’ attitude kept him away from the practices.

Finally, the Jeff Thomas hype train was full speed ahead on Thursday, his second full practice in a row. He stood out in all facets as he looked good in WR drills and then made his first catch in team drills while being covered by top tier CB, Stephon Gilmore, only to follow with a nice sideline catch against fellow ProCane, Michael Jackson, Sr. He also emerged during his lone 1-on-1 rep and nearly hauled in a one-handed snag.

Jeff Thomas is on the board with his first two catches of camp in team drills, first underneath a Stephon Gilmore zone on a quick throw from Cam Newton, then from Jarrett Stidham on a nice sideline route against Michael Jackson.

Many were mixed on whether New England would be a good fit for Thomas due to its regimented, no tolerance system, that would either straighten him up or turn him away. Despite limited exposure with their rookies, the Patriots did make cuts, so it was a good starting point that Thomas made the 90-man roster last month.

However, to make the 53-man roster, it is believed that Thomas would need to turn in a perfect camp, which makes sense for all undrafted rookies. Even though Thomas was simply electric when on the field during his career at the U, he ended up being benched, dismissed, and suspended, which led to him being ignored in the draft.

Thomas is an explosive athlete with immense potential and talent. Despite a small frame at 5’10” 174lbs, he shows unmatched quickness out of the blocks, an ability to work out of the slot or take the top off the defense due to his speed, and phenomenal route running. Thomas is also a lethal punt returner, even though he did muff a very important one in the Florida-Miami rivalry game last season.

Based on his missed practices, Thomas is currently on the outside looking in on a crowded WR room that features veterans Julian Edelman and Mohamed Sanu, as well as young, promising prospects in N’Keal Harry, Jakobi Meyers, Damiere Byrd, Gunner Olszewski, and Devin Ross. The Patriots also have undrafted rookies, Isaiah Zuber and Will Hastings, and hosted four other young slot receivers on Wednesday. There is still time to see if Thomas could carve out a spot for himself on special teams as a punt returner or somehow sneak into the WR depth chart, which I am personally rooting for.

However, the more likely scenario, based sheerly on the missed practices, is that Thomas does not make the 53-man roster on September 5th. If that is the case, the Pats could use an injured reserve spot for Thomas. This tactic, sometimes referred to as the “Foxboro Flu”, is commonly utilized by the Patriots in order to stash away young players in New England for an extra year (For example, former Cane and now New York Jet WR , Braxton Berrios, spent his first NFL season on the IR with the Patriots before being cut the following season). Another option could include putting Thomas on the practice squad, which would indicate the Pats want to keep him around to give him the chance to fight for a spot at a later date. This would also be a good sign as it would imply that Thomas has truly been battling an injury but had the right attitude to remain in the Pats’ organization. Lastly, Thomas could be cut and need to prove his worth with another team through tryouts, which may be tough if he is indeed struggling with an injury.

The chronicles of Jeff Thomas were certainly a rollercoaster at Miami. Ideally, Thomas can make a smooth transition by showing off his flashy skills, especially with a clean slate at the NFL level. Thomas’ solid performance on Thursday creates some reason for excitement and could serve as a catalyst to finishing the camp on a positive note. However, the early missed practices, even if completely unrelated to his troubled past, create a hiccup as he seeks to establish himself as a ProCane.