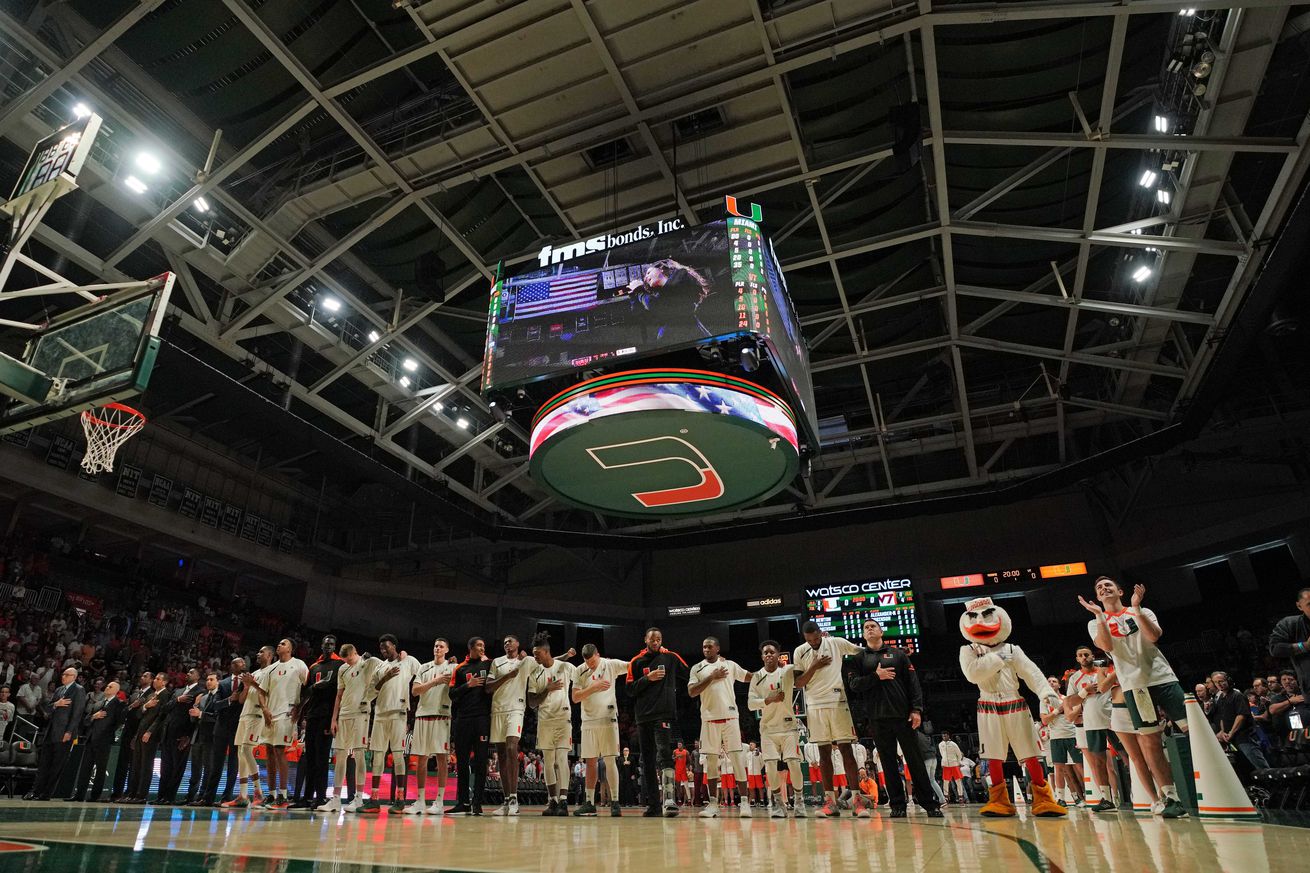 Miami Hurricanes basketball team stands on their home court honoring the national anthem prior to an ACC matchup versus the Virginia Tech Hokies on March 3, 2018 at the Watsco Center (Coral Gables, Fla.). | Jasen Vinlove-USA TODAY Sports

Four-star combo guard Nisine Poplar has officially committed to the Miami Hurricanes basketball program on Tuesday night, according to 247 Sports and other sources.

A Philadelphia native, Poplar comes to Coral Gables, Fla., from the Math, Civics & Sciences basketball program as a 6-foot-5, 180-pound scoring guard. His commitment marks the second in the 2021 class for Coach Jim Larrañaga and the ‘Canes.

Having averaged 22 points, five rebounds, and three assists per game in his junior year, Poplar helped lead his school to a Philadelphia Public League championship in 2020. He was also named Pennsylvania’s class 2A player of the year.

“He was in 10th grade when he came to our school,” Diggs said. “I was like, ‘Hey, this kid is pretty good’. It’s very unusual to see a player emerge this quickly as one of the best players in the city, really without having much of a background in the game. Sometimes, you’ll see a 6-9 kid come out of nowhere. But not a smaller player.”

The Hurricanes commit had considered other high-major programs on the East Coast, including Georgia, Seton Hall, and Maryland, among others. He joins the program’s other recruits in originating from the northeast.

Poplar’s commitment now solidifies Miami’s backcourt for after this season, while four-star guard Bensley Joseph, a Putnam, Conn., native, had committed on July 27, 2020. The team will combine these talent infusions with transfer guard Elijah Olaniyi, a senior who will have one year of eligibility remaining for the 2021-2022 season.

The Hurricanes have not made an NCAA Tournament appearance since March 2018, a 64-62 first-round loss to the Loyola (Chicago) Ramblers. Plagued by a myriad of injuries and even former center Dewan Hernandez’s ineligibility case, Larrañaga looks to lead the team back to the upper echelon of the ACC this fall.