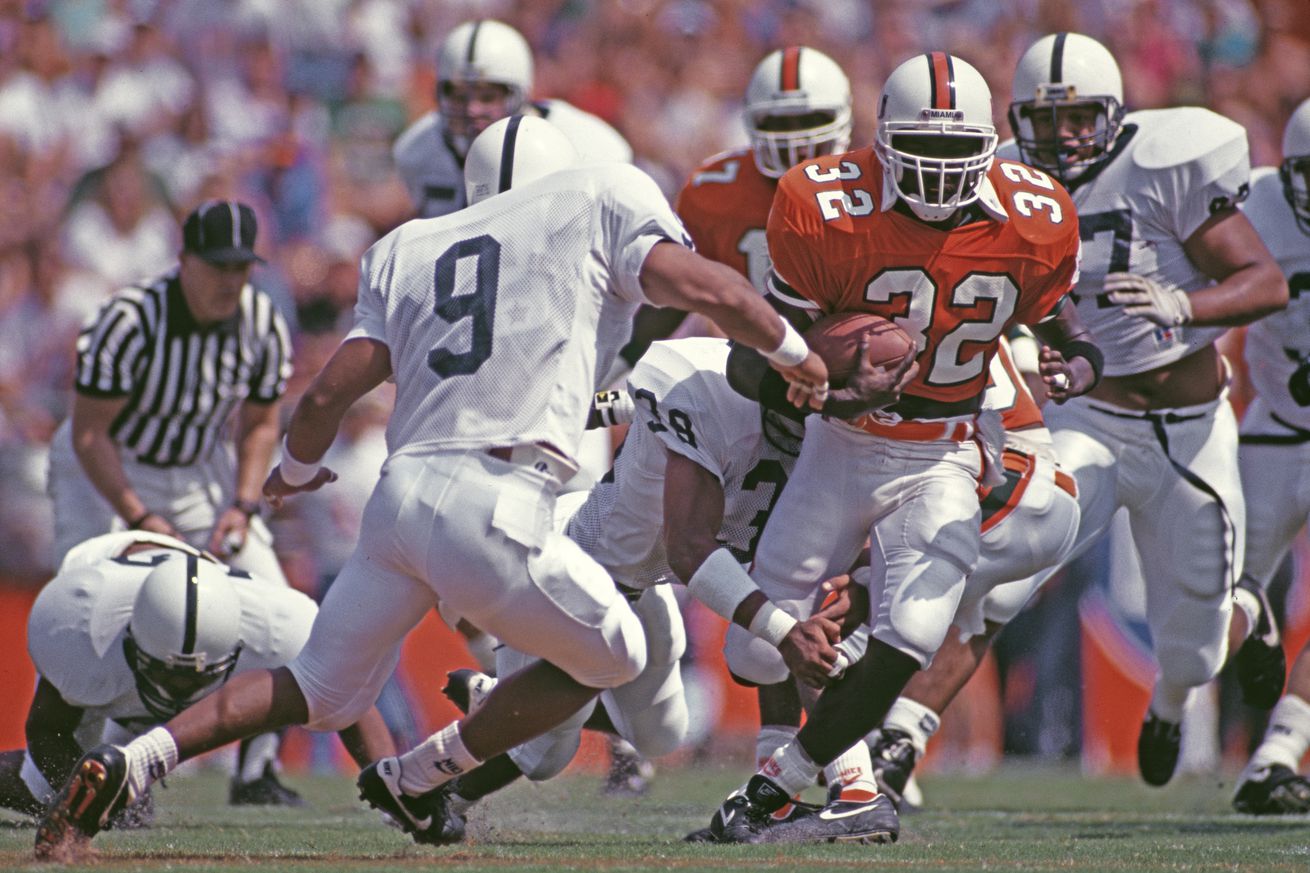 Time to find out how much you know about your favorite football program.

Congrats to Stratos1, who led the way with 6 correct answers. Hefty9 was the only one to answer #5 correctly, regarding the former Miami All-American that went on to a very successful career as a guard for the Los Angeles Rams. That would be UM Sports Hall of Fame inductee Dennis Harrah, if you need him. Thought more would’ve gotten that one right, but hey, not everyone is as much of a history dork as I am. Such is life.

1) In 1972, Miami was the beneficiary of a rules error. Trailing 21-17 with less than a minute to play and facing 4th and 24, Canes QB Ed Carney’s pass fell incomplete. However, the officials gave the Canes a fifth down, and Carney connected with Witt Beckman for a 32-yard score that gave Miami a controversial 24-21 win. Who was the opponent?

2) In which of the following comeback victories did Miami face the biggest deficit?

3) This Hurricane found the end zone twice in the first quarter as Miami jumped out to a 17-0 lead in the 1984 Orange Bowl.

4) Miami has one win at Notre Dame in its history. When did the Canes triumph in South Bend?

5) I was a consensus All-American as as a senior at 1974 at UM. I played for the Los Angeles Rams for 13 seasons as a guard, where I made the Pro Bowl 5 times and played in Super Bowl XIV against the Steelers. I retired after the 1987 season and was inducted into the UM Sports Hall of Fame in 1989. Who am I? Dennis Harrah

6) This Hurricane player was shown kissing a Miami cheerleader after winning the 1988 Orange Bowl and the national championship, which graced the cover of the January 11, 1988 edition of Sports Illustrated.

7) How many times has Miami defeated the #1 ranked team in the AP poll?

8) Miami’s final victory in the Orange Bowl Stadium was against whom?

9) Miami players carried Larry Coker off the field after his final game as head coach, an MPC Computers Bowl win to cap off the 2006 season. Who did the Canes beat?

10) Miami has had two Outland Trophy winners. Who are they?

And now, on with this week’s questions….

1) This opponent shut out Miami in a bowl game for the first time since 1935, coming in the unfriendly confines of Tempe, Arizona.

2) I was a first-team All-American by The Associated Press in 1994 and first-team All Big East. I was a semifinalist for the Jim Thorpe Award. I was a leader of a UM defense that ranked No. 1 in the NCAA for pass defense in 1994. I finished that season with 85 total tackles, including 48 solo. Who am I?

3) This former Cane blocked a field goal and returned an interception for a touchdown in Miami’s 31-21 Carquest Bowl win in 1996.

4) Miami’s all-time record against Alabama is the following:

5) This UM pass catcher set the school record for catches in a game vs. Maryland in 1984 (a feat that was later matched by Phillip Dorsett vs. USF in 2012).

6) If not for the steady leg of this former Miami kicker, Miami would have lost a squeaker in 2003 to West Virginia. Instead, his 5 field goals carried UM to a 22-20 win.

7) The Ibis was selected as the school’s first unofficial mascot in 1926. Why did school officials select it?

a) It was a bird found all over campus.

c) It was the favorite pet of one of the school’s founding administrators.

d) It was found on the practice field while the football team was practicing and would not leave.

8) On the opening kickoff of the 1991 Cotton Bowl this Miami player blasted the Texas returner Chris Samuels, setting the tone for what would be a lopsided Miami romp.

9) This Miami defender holds the school record for tackles in a season.

10) This individual served as athletic director at UM for 15 years and also compiled a 54-32-3 record as UM head coach.