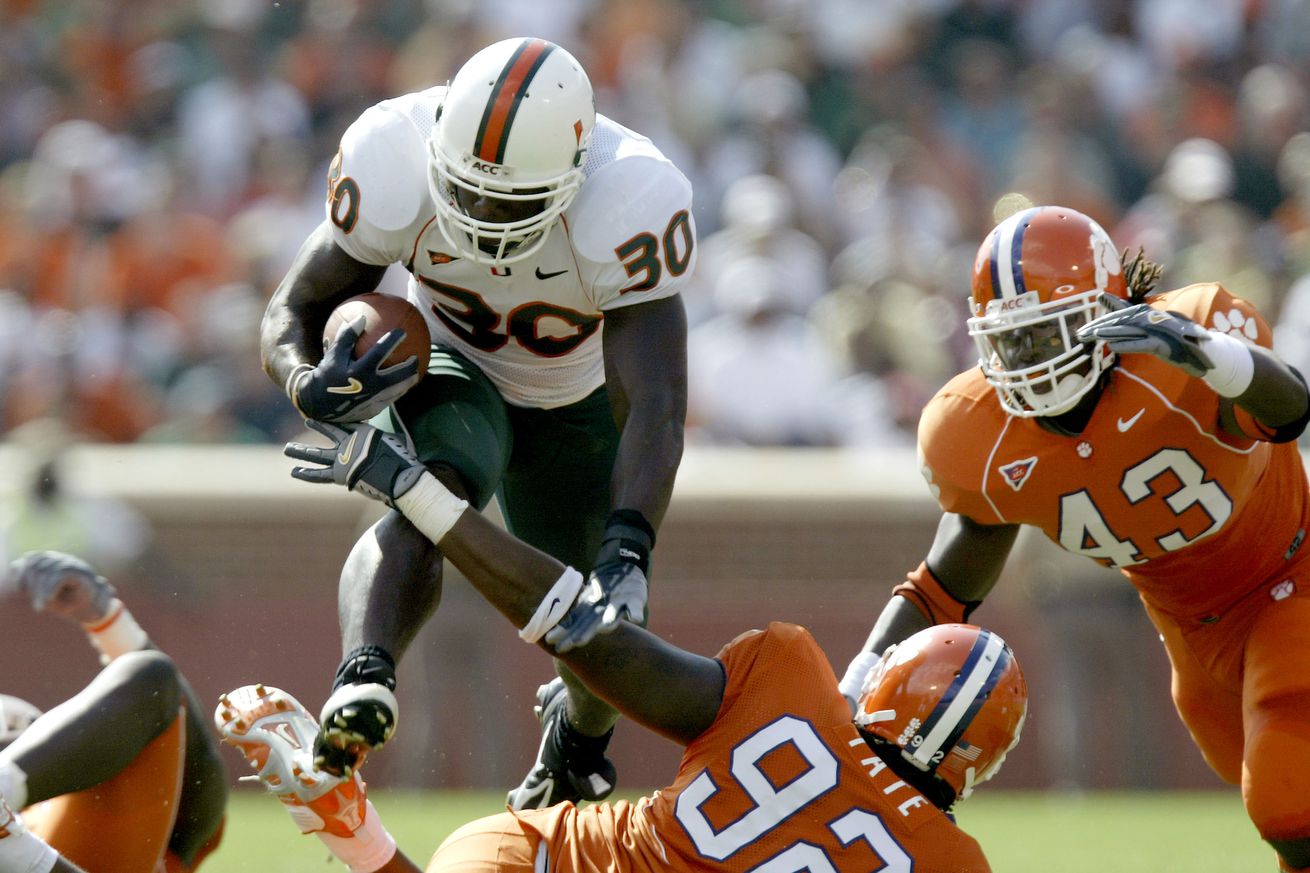 Time to test your knowledge about your favorite football program!

Congrats to SBERG, who led all contestants in last week’s FSU-centric trivia with 7 correct answers. I appreciate all of you who play each week. It’s actually as much fun for me to scratch my Canes history itch each week as it (hopefully) is for you all to play.

As we’re in the middle of a bye week, I’ll revert back to the normal, wide open questions this week. But first, here are the correct answers from last week’s questions…..

1) Which Miami player blocked a field goal attempt late in the 4th quarter by FSU’s Xavier Beitia to preserve Miami’s opportunity to stage a dramatic comeback in the 2004 season opener?

2) When did Miami and FSU start their annual rivalry?

3) I caught the game opening touchdown from Jacory Harris against FSU in 2009. I would go on to be the leading receiver for the game with 4 catches for 128 yards and one touchdown. I was drafted in 2012 by Cleveland with the 100th overall pick, have played for the Browns and Chargers, am currently with the 49ers. Who am I? Travis Benjamin

4) In 2003 amidst a downpour in Tallahassee, Miami and FSU slogged their way through a sloppy 4 quarters in a 22-14 Canes win. How many combined times did the two teams turn the ball over?

5) Which of the following quarterbacks went undefeated as a starter against Florida State?

6) Which FSU kicker flubbed the potential game-tying kick in Wide Right III in 2000?

7) Dennis Erickson was the head coach for 2 of Miami’s titles and during Florida State’s first. As such, he was front and center in many memorable games against FSU. What was his record at Miami against the Seminoles?

8) In 1987, Miami trailed Florida State in Tallahassee before Steve Walsh engineered a furious comeback with three touchdown passes on the way to a 26-25 win. From what deficit did Miami rally?

9) With under 3 minutes to play in the 2007 matchup in Tallahassee, this Miami QB engineered a 7-play, 83-yard game-winning drive that ended with a 13-yard touchdown pass to TE Dedrick Epps.

10) This FSU quarterback had a miserable performance against Miami’s defense in 1994, completing 13 of 28 passes with 3 interceptions before getting pulled in favor of backup QB Jon Stark during Miami’s 34-20 win.

And now, on with this week’s trivia….

1) Which of the following schools DOES NOT have more AP national championships than Miami?

3) This RB led the Canes with twelve rushing scores in 2005.

4) This former Hurricane great was inducted into the Pro Football Hall of Fame on August 3, 2013. He helped redefine the defensive tackle position, terrorizing quarterbacks as a Buccaneer and Raider during a thirteen-year NFL career. Who is he?

6) This former Miami star anchored the center of the Oakland Raiders’ offensive line for fifteen years, and played in six AFC/AFL title games, as well as Super Bowl II. He is a member of the Pro Football Hall of Fame. Who is he?

7) This former Canes defensive lineman and Super Bowl champion with the Giants and 49ers set the school record with 4 fumble recoveries in one game.

8) When Jimmy Johnson was hired as head coach in 1984 to replace the recently departed Howard Schnellenberger, from what school did he leave?

9) The Canes have two Heisman Trophy winners in their illustrious history. Name the winners and the year they won the trophy.