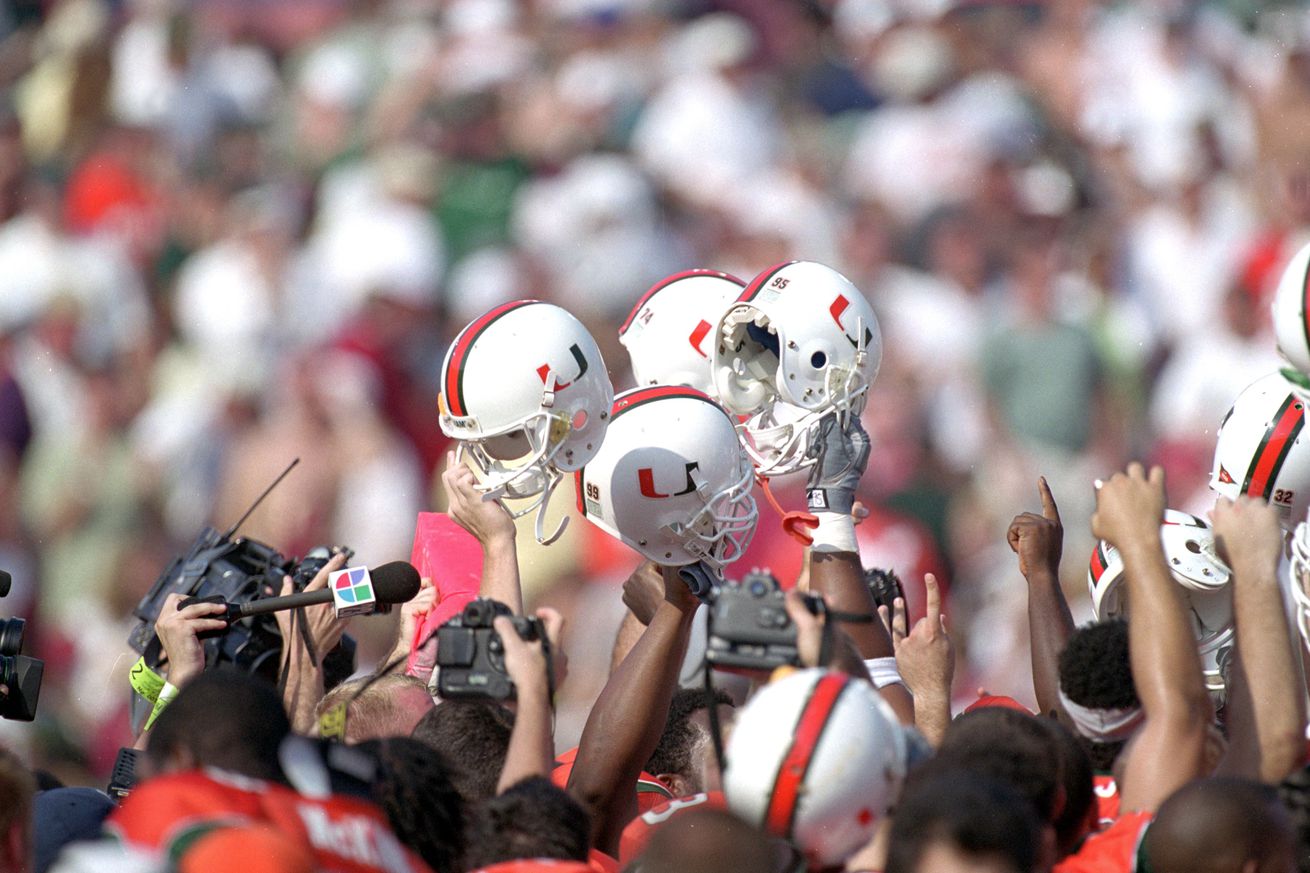 Miami FSU 2000 was my 1st Canes Noles game, and none have ever lived up to what happened that Saturday in October 2000.

Rivalry is defined as “competition for the same objective or for superiority in the same field.”

The Miami Hurricanes have many rivals, but none creates the passion, the energy, the trash talk or the hatred like the Florida St Seminoles. For many years this game was for a spot in the National Championship game, so it meant more than just a typical college football game. It’s rivalry week on SB Nation platforms, so let’s relive the 1st live Miami/FSU game for me.

For years as a youngster, my family and I would gather around the TV and watch Miami/FSU with the intensity and vigor of the people who were lucky enough to have tickets for the game. Money was tight, so the thought never crossed our minds to actually purchase tickets for the game. That all changed in 2000 when funds became more readily available, and the rivalry was back to wear it belonged.

Miami was ranked #7; FSU was the defending National Champions and the #1 team in the country. Two of my best friends Carlos, and Dave called me and said “we are buying tickets for the game, do you want to go?” My response was a simple “hell yeah” and the plans were set in place for an epic weekend. Planning was simple, a cheap weekend trip from Atlanta down to West Palm Beach on Air-Tran, crash at their spot, drink a bunch, go to ESPN’s College Gameday, and watch Miami end the 5 game losing streak to the Noles.

A guy’s weekend can never just be about the football game, so as a bunch of single 20 somethings, Friday night had to be epic before the big game. Dave hooked up a few “dancers” to come through their house the night before to get the activities kicked off. The festivities kicked off around 9pm with some Hennessy and Coke, and a few well-placed $1 bills. Remember this was a noon kick in Miami, and we are in West Palm Beach, so an early wake-up call was in the cards. The party raged until about 3am, and people crashed wherever they could. 7am came really quickly, the hangover and headache was raging, but there was college football on the docket, and the only way to recover is “hair of the dog”, so more alcohol was in the cup along with some type of breakfast. This would prove to be an ill-fated decision later in the day.

We had a caravan of 15 people heading to the game, unfortunately about 11 of them being FSU fans. Road trip was quick and easy and we pulled up to the Orange Bowl around 9:15am, which gave us enough time to refill and head over to the set of College Gameday. Miami fans were in rare form, chanting “F You Corso” and “Spank your Weinke” so loudly that the producers of ESPN’s signature college show had to ask us to quiet down. There was a moment where a drink was thrown at the set that soaked Corso and Herbstriet. Let’s just say Canes fans were ready for a big day. It was my 1st time at Gameday, so I lost a good portion of my voice yelling at the TV show. We didn’t make it to watch Corso pick FSU because we wanted to get to our seats before the noon kick.

Third row! Third row, right on the goal line was where our seats were. I think I paid $40 for my seat to be third row for my 1st ever Miami/FSU game. I would’ve paid $40 to sit up against the chain-link fence in the upper deck, but here we were for what would turn out to be one of the greatest games in the history of the rivalry.

It was hot, like historically hot that October afternoon in Miami, and do you think I had a drop of sunscreen or sip of water that day? The answer predictably is no, and this would come back to haunt me later that day. Miami played almost a perfect 1st half, and lead 17-0 headed to the break. Dan Morgan put an exclamation point by intercepting Chris Weinke in the end zone to preserve the 1st half shutout. Who knew at that point we all would be in for an epic 2nd half? We ran into the shade with the attempt to buy some water at halftime, but to everyone’s chagrin the Orange Bowl was out of water. Remember all the drinking? Well this was when the effects really started to kick in. So I bought a Sprite….it was liquid and cold, and surely would re-hydrate me for an epic 2nd half right? How do you run out of water? To this day I still have no clue how that happened.

Florida St would fight back, and entering the 4th quarter we had a close game. By now I was feeling the Hennessy, the lack of water, and the extreme south Florida heat. In between plays my entire body was cramping up, and I would have to sit and stretch between plays to avoid going into a full body cramp. Didn’t matter, it was the 4th quarter of Miami/FSU and my Canes were trying to announce they were back among the national elite. 20-17, Miami ball and the Canes faced a 3rd and short. Ken Dorsey hit Najeh Davenport on an angle route for what should’ve clinched the game, but unfortunately #4 put the ball on the carpet. “No, no, no, not again” was screamed collectively throughout the Miami fan base. FSU would get the ball in plus territory and a few plays later Atrews Bell caught a Weinke pass for a TD, and the Noles took the lead. My head dropped, tears welled up in my eyes, because there was no way my 1st Miami/FSU game was supposed to end this way.

Ken Dorsey, Santana Moss, Reggie Wayne and some guy named Jeremy Shockey would star on the ensuing drive. When Shockey caught the go ahead TD, it was on the opposite end of the stadium from where we were sitting so it took a second to realize Miami had the lead. 40 plus seconds was all that stood between us and an epic celebration. Those 40 plus seconds seemed to take an hour, but FSU moved down the field and setup a potential game tying FG. Matt Munyon finally got the opportunity to tie it up, but as in many other Canes/Noles games, he missed it wide right. I never looked at the kick; instead I focused on the closed end zone and watched the reaction of Miami fans. When I saw that he missed, the Orange Bowl erupted into one of the greatest celebrations I’ve ever seen. Yes I cried….a lot, and even attempted to jump on the field to celebrate with the players. A Miami Dade Police Officer politely told me that would be a bad idea, and it was better for us to celebrate in the crowd.

Leaving the stadium was euphoric! I was sunburnt pretty badly and dehydrated to the point where I was drinking melted ice out of people’s coolers, but it didn’t matter, because Miami was back and we had just beaten the Noles. To this day it is awesome to remeber watching Snoop Minnis and other FSU players crying as they were leaving the field. We forever dubbed them the “boo hoo boys.”

The BCS would screw Miami out of a National Title that year, but Miami was back among the best teams in the country. Over the past 20 years, I’ve attended about 16 Miami/FSU games, but none will ever be a special as the 1st.