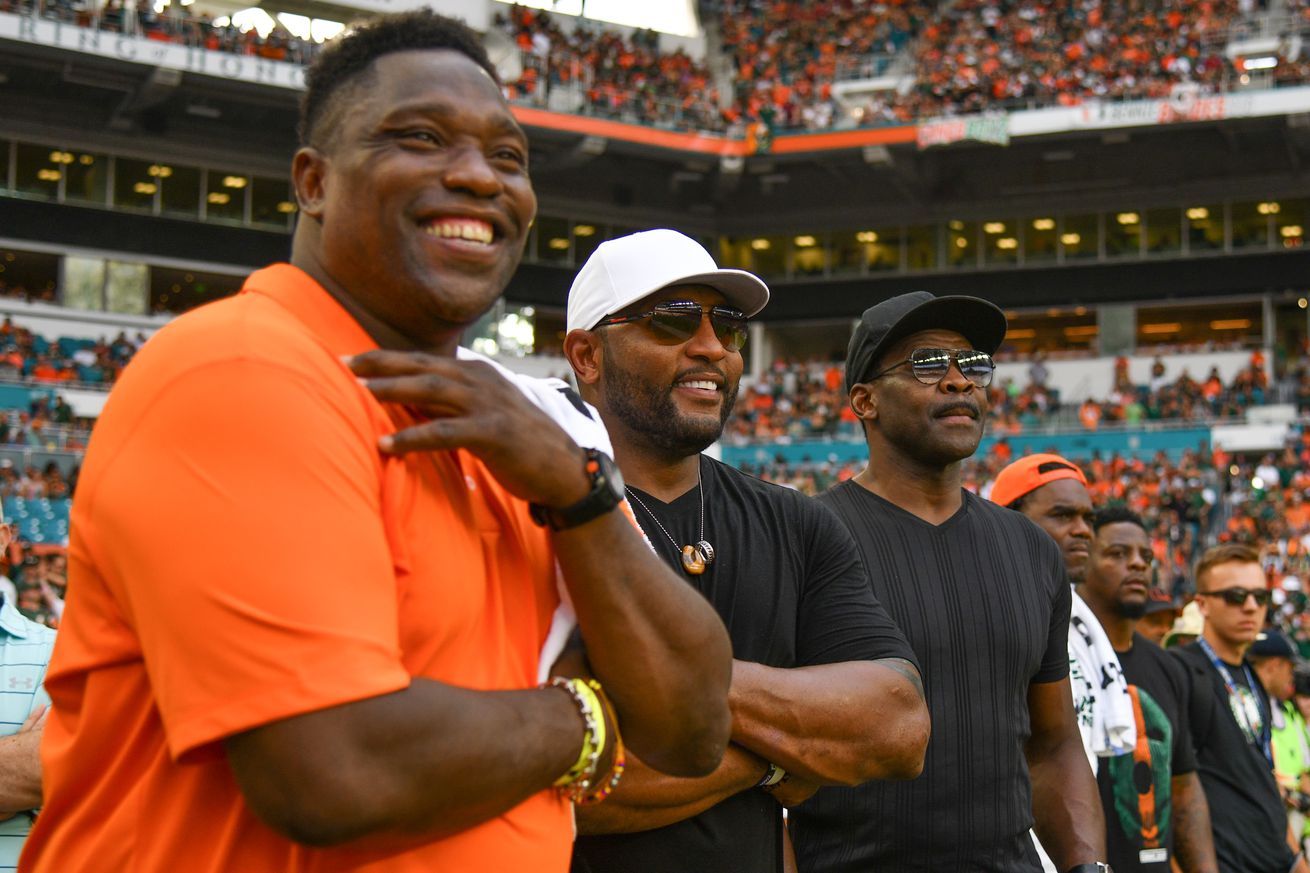 Which of these former Canes should get in the Hall of Fame?

Debates about who is the best school always wage during this time of the year. QBU, RBU, DBU, etc. are thrown around by athletic programs and fans alike, but how about Hall of Fame U. Miami garnered another Hall of Fame selection with Edgerrin James (really 2 if you count Jimmy Johnson) to bring their Hall of Fame total to 9. The only schools in front of Miami are Notre Dame with 13, USC with 12, Michigan & Ohio St with 10, and then come the Canes with 9. To put this number in perspective, Alabama has 8, Florida only has 2, and FSU has 4. Miami will have a chance in the next decade to have the most NFL HOFers of any school in the country.

Let’s examine some of the potential candidates and their merit to be enshrined in Canton Ohio.

Andre Johnson – On sheer numbers alone Dre should have no problem getting into the Hall of Fame. Johnson finished with 1062 catches, 14185 yards and 70 TDs. He sits 11th in both catches and yards just one spot behind Reggie Wayne, but the perception of Johnson is just a hair different than Wayne. Andre never played with a premier QB, and at times had some low TD numbers which could hurt him.

Frank Gore – Frank Gore is currently the NFL’s 3rd All-Time rushing yardage leader only behind Walter Payton and Emmitt Smith, which should leave Gore as a no doubter. I have heard though, some arguments against him getting in the Hall of Fame. Those debate usually center around the fact that he wasn’t considered one of the elite backs during his time frame in the NFL. He had nine 1000 yard seasons, 7 of those over 1100 yards and 3 where he was north of 1200 yards. Anyone who doesn’t think Frank Gore will be in the Hall of Fame is clinically insane.

Vince Wilfork – Numbers will never back up how important Wilfork was to the interior of the Patriots run through the 2000s, but Vince was an integral part of their dynasty. 5 times he was selected as a Pro Bowler and 1 time 1st team All-Pro. Vince is a unique case who never had the monster tackle, or sack numbers, but constantly took on double teams and would free up others to make plays. He may have to wait a few years, but eventually his name should be called.

Probability – 88% Chance to get in Hall of Fame

Probability – 60% Chance to get in Hall of Fame

Greg Olsen – G-Reg has put together a tremendous NFL career and will have a case when he is finished that he belongs in Canton with the other all-time greats. There are 9 TEs who are in there now, and Olsen will have numbers to match up with most of them. 718 catches for 8444 yards and 59 TDs are more than Ditka, Smith, Newsome, Winslow, Casper and Mackey. Although he only had 3 Pro-Bowl selections he did have three 1000 yard seasons mostly in run based offenses.

Probability 65% Chance to get in Hall of Fame

Jimmy Graham – See above for the competition to get in, along with names like Gronk, Witten, and Gates. Graham and Olsen may wait a few years, but they are definitely worthy of consideration. Graham was unstoppable in New Orleans averaging 88.75 catches, 1099 yards and 11.5 TDs over a 4 years stretch. If he didn’t have micro fracture surgery on his knee, he’d be 100% in, but even so the argument can be made to put JG in the hall.

Probability – 54% Chance to get in the Hall of Fame

Calais Campbell – One of the better 5 technique DE’s in the NFL. Campbell won the defensive player of the year in 2017 when he had 14.5 sacks for Jacksonville. For his career he’s been an elite level defender who’s made 5 Pro-Bowl appearances and has 88 career sacks. Campbell will need to finish his career strong to make his way to Canton.

Probability – 47% Chance to make the Hall of Fame

Every other school can argue what they want, but Miami will go down as the greatest NFL talent producing school in history. Not only does Miami put a lot of players in the draft, but after this group gets in, the Canes will have the most NFL Hall of Fame players of any school.

Who should get in from this group? Who else deserves consideration?