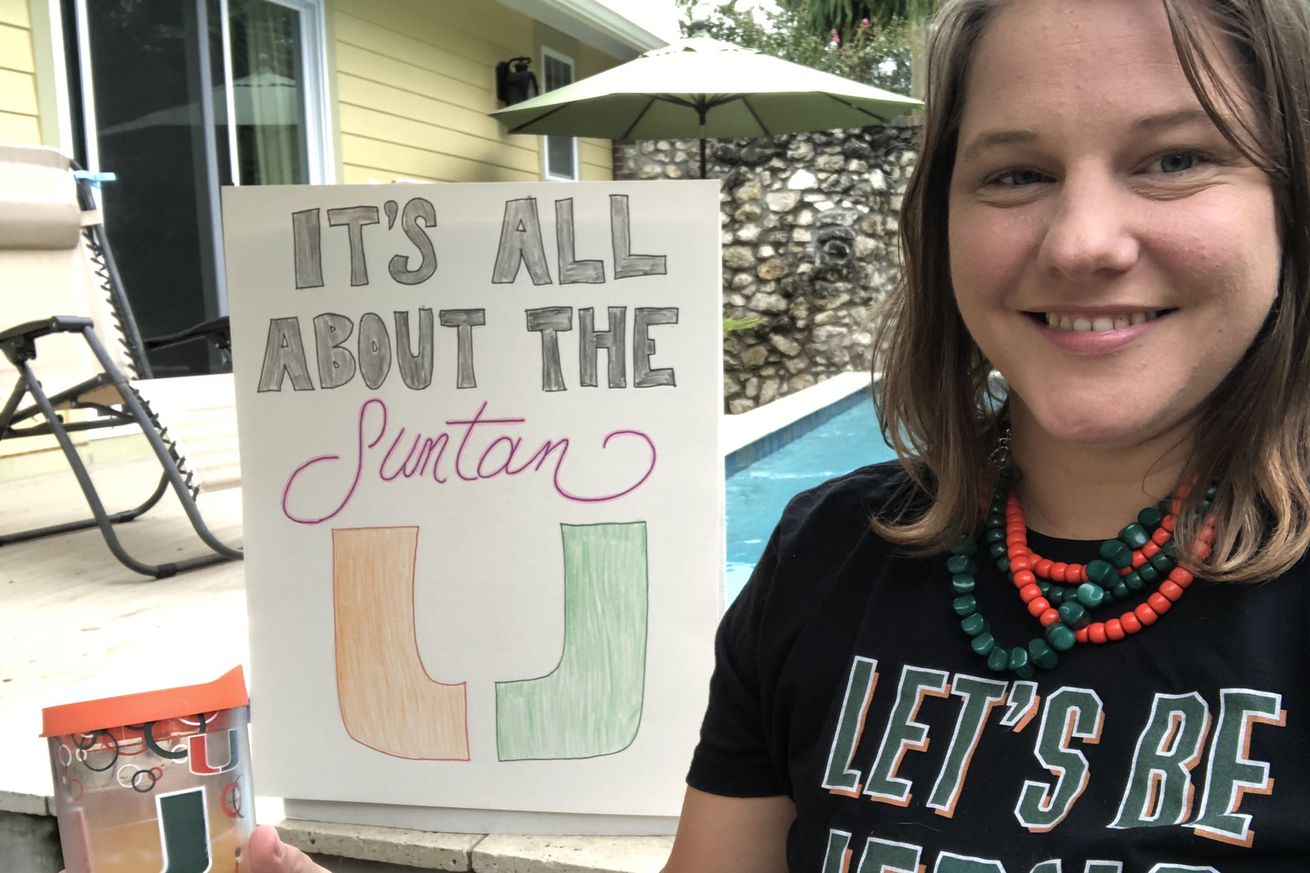 A first person view at the experience being a GameDay virtual fan, and how it could be you!

Last week, Miami at Louisville was featured on ESPN’s College GameDay. And, with no fans allowed at the event due to COVID-19, ESPN went virtual with things.

And wouldn’t you know it: one of my friends was a featured fan on the show!!!!!

Take it away, Robin!

So you want to be on Gameday…

Kids, I have entered every lottery possible. Every year I put in for the HGTV Dream home, I woke up everyday at 5am for a month to try and get Hamilton tickets, when I was 12, I saved up Pepsi cans for months to try and get an official NFL style Troy Aikman jersey. Alas, I’ve never won anything…until today. Guys, I made it on Gameday!!

First of all you have to enter! It’s quite easy. Just go to https://collegegameday.com/ and put in your contact information and pick TWO of your favorite teams. That’s it! Just enter and wait. Your selection will depend on where GameDay goes for their “Marquee Teams” and also what is going on in the news that week. They pick 50 fans of the two teams that are in their main matchup and 300 of other teams. I can’t say for sure but the away “marquee team” seemed to have more virtual fans as the home team had cheerleaders and mascots and such but that may just be that there aren’t really any Louisville fans. For the other 300, they pick a panoply of teams based on the narrative of the show (and also hilarious signs). This week the big news was that the B1G 10 was back so they had lots of Michigan and Ohio State teams.

On Tuesday of the game week, you’ll get an email in the afternoon saying you were selected! Make sure to check your spam filters.

MAKE SURE YOU RSVP!!

Tell everyone you are going to be on Gameday! Then start second guessing whether you should have told anyone because what if you mess it up?

Start thinking about your sign! You can see the full rules but basically, just don’t be an idiot. No logos, nothing vulgar, and (new this year) not soliciting you’re your Venmo/CashApp/Carrier Pigeon location. Remember it needs to be visible from your screen so you can have it in your background (as I did) or have a piece of paper you hold up to the camera.

In the meantime, start thinking about your location & setup. Scout your preferred area early in the morning. Is the sun directly behind you? Is your camera dark? Would your iPad work better than your laptop? Do you have a place to charge said device? How is your internet connection in this location? Can you possibly plug directly into your router so you don’t have wifi issues? What is behind you? If you have any logos (other than teams) you’ll have to take it down. Can you see your sign? Do you need to have a light shining on your sign? The more interesting your background the better!

What are you going to wear? I would guess fan gear but make sure your non-fan gear (hats, etc) don’t have other logos on there. Gameday doesn’t care that your dad’s lawnmower shop will sign a waiver, you can’t wear their stuff on air. I had my exclusive SOTU “Let’s Be Jerks” shirt and had to get approval from the show director on the day-of to wear it.

Then, wait. They tell you you’ll get an email on Friday afternoon. When I didn’t have an email by 4pm EDT, I was nervous. By 5pm, I was googling how to reach out to the production team. Then, like magic, I got my log in instructions!!

As tempting as it is to immediately click the link to test it, DON’T DO IT!! You only get one click per link and then it’s dead. You can’t forward it to anyone and if you use your laptop but then decide your iPad is better, you are SOL.

Have a fitful night of sleep where you dream about missing your alarm and Kirk chiding your sign and Lee Corso telling you that you suck. Just me? Let’s move on.

If you’ve never been on TV before, let me just say, HD is not your friend. If you are a girl, overdo your makeup like you are stepping out for the night (but not on Calle Ocho). Avoid any reflective makeup. Keep it natural but heavy. If you are a guy, ask your girl for some powder and tinted moisturizer. Just take a bit of the edge off, trust me. It seems weird but it will pay off handsomely (see what I did there) in the broadcast.

You can sign on as early as 8am. I signed on about 8:40 (I was finishing my sign, ever the procrastinator) and didn’t have much of a wait. First, you’ll log on with your link and put in your name/city as you want it to appear to the world. You are then required to watch a video about not being a dick on TV (pretend your preacher is sitting next to you). After that, they will send you to a producer for a tech check. Allow plenty of time for this as my tech check failed because of microphone issues (mind you, I video conference with tech companies DAILY and still had issues). By the time I fixed everything and got to the live show, it was just starting. As part of the tech check they ask to see your apparel (front and back) as well as your sign (front and back). I hadn’t prepared and my sign was already anchored so when I showed them it was anchored and couldn’t really move, they were placated.

This is also the time when you can become a SUPER FAN!!!! (more on that below).

What is a super fan? When you are in your tech check, show energy, have a sign (mine wasn’t funny but it was a sign) and great background. If you engage with them (say good morning, laugh, pretend you are on Price Is Right) they will likely pick you as a super fan and you are more likely to show up (especially as one of the final 6 with Corso’s headgear pick if you are marquee team). I can say as a superfan, I showed up WAY more than other fans.

You’ll be asked to do 15-30 seconds of cheering every so often (mostly as they are doing an intro/outro or about your game if you are one of the 300 “other” teams). They give you countdown warnings to let you know you are coming on camera but, as this is live TV, they aren’t always accurate. I, myself, got caught texting as we came back because they told us 2 minutes but came back in 1:15. Luckily, they do yell at you that you are on camera so you can jump back into the fray.

If you are a super fan, they will come randomly in the middle of program to tape 15-30 seconds of cheering and this is your time to shine. Yell loud! Bring in your dogs, kids, whatever. Pick up your sign! Point out your shirt! Most of all PRACTICE WHAT YOU WILL SAY! It seems like a short amount of time but it feels like an eternity. You can only say “Go Canes” so many times. May I suggest something along the lines of “You want to go to the NFL? First stop THE U!” Came up with that witty repartee well after my recording time.

You’ll still get to watch the show without commercials (heaven!!) but you won’t always see the fan images. The feed can be a bit wonky at times. If you have ANY problems, just shout. Literally. Your feed is always live (and is recorded so be careful what you say). My audio feed went out and I just started saying, “Hello! My feed is out” and a producer came on and fixed the feed (obviously, make sure it’s not your fault first).

You CAN take breaks to pee, refill a drink, etc. While you would think commercials are best, usually they are checking the feed to come back from break and if you aren’t there, they will cut you out. Try to go during the pre-recorded segments. Or just have someone that doesn’t want to be on camera fetch you drinks.

All in all it was an amazing experience!! It went by SO much faster than I thought. Sadly, you don’t get to meet any of the big 5 (although I’m not surprised). I do wish we got to have the live feed during commercials just so see behind the scenes. I’ve been shutout of a couple of live GameDay for various reasons (mostly cancelled flights) so I was thrilled to be a part of this one. And honestly, this is how I prefer it! I can sit down, have a few drinks (delivered by a dutiful husband), not have anyone puke on my shoes, and cheer on my team! It’s ideal really. #GoCanes!!

Wow! That’s incredible! Thanks to Robin for sharing her experience, and how it all came together.

And if you want to have a chance at the same experience Robin had, follow the instructions and hope for the best.