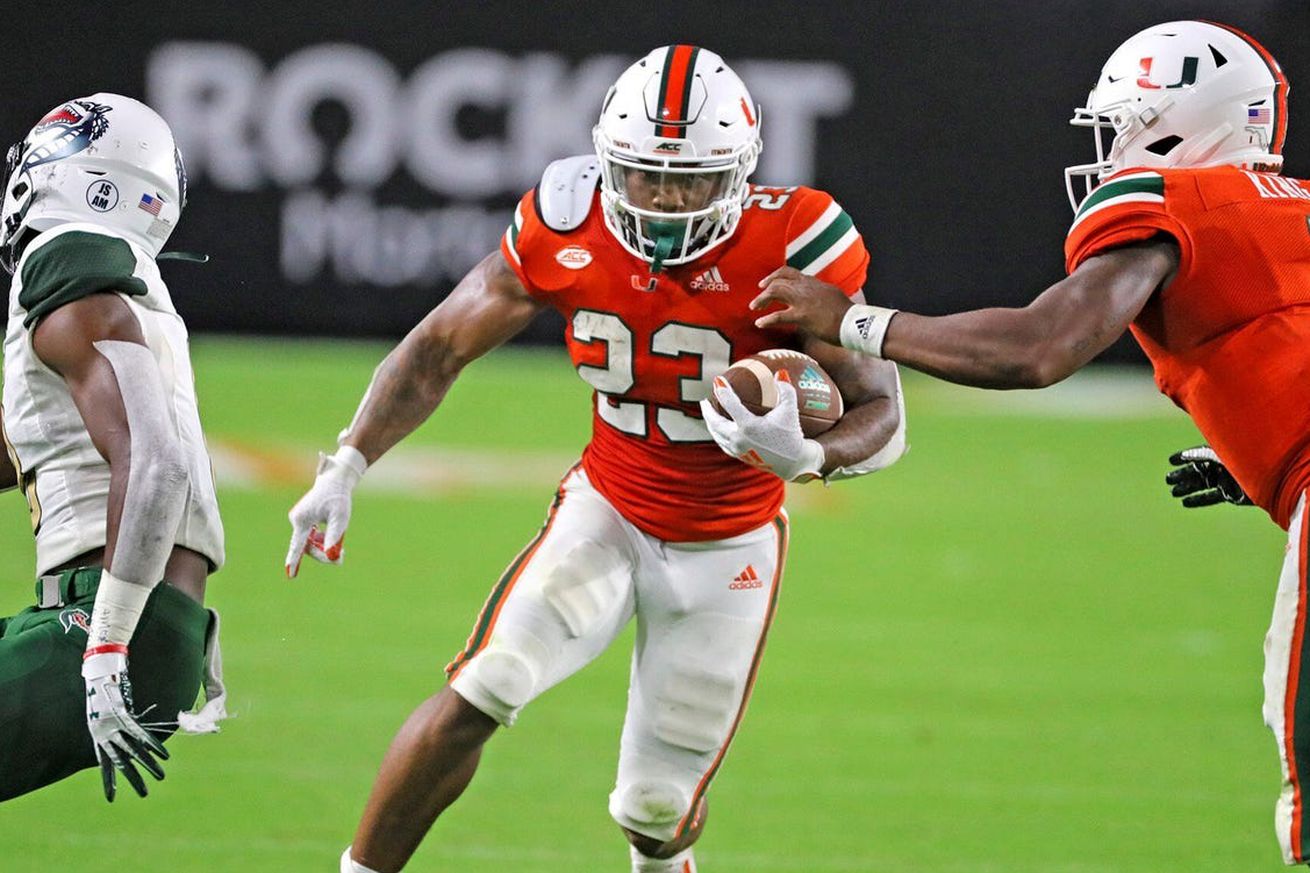 In week one, Miami’s ground-and-pound and electric rushing attack led the way to a 31-14 victory over UAB. And “led the way” is certainly an understatement as the Canes rushed for an astounding 337 yards in the opener (out of their 495 yards total). The sparkplug for the big running game was an impressive 66-yard sprint through a crease up the gut by junior tailback, Cam’Ron Harris, which knotted the game up at 7-7 late in the first quarter. The Canes kept running and running as Harris paved the way on his way to 17 carries for 134 yards and 2 TDs, QB D’Eriq King added 12 carries for 83 yards and a score, and freshmen RBs, Jaylan Knighton and Donald Chaney Jr. collectively garnered 111 yards on 17 carries.

The Hurricanes tie it up!
pic.twitter.com/F0XUnsmRD0

The common counter to the impressive stat sheet is “it was against UAB.” However, there is an argument to be made that UAB is a solid run defense. Last year, the Blazers were the 20th best run defense in the country, allowing 119.9 yards per game. They also retained a lot of their talent from last year as they have LBs Kristopher Moll who led the team with 69 tackles, as well as LBs Noah Wilder and Jordan Smith who collectively tallied 78 tackles total last season. and retained a lot of the year. In addition, UAB allowed 35 points in their opener, but only 100 total yards rushing. The final retort to it being UAB is they have a terrible schedule in Conference USA. This is true, but in 2019 they did have games against Tennessee, Appalachian State, and Louisiana Tech – the last of which is the team that shutout Miami in their Bowl Game last year.

To continue to make their case this past Saturday, Miami again dominated on the ground and the RB-by-committee but this time they exhibited their breakaway speed and big play capabilities. On a mere 30 carries, the Canes mustered 160 yards rushing (5.3 yards per carry). The lead workhorse, Harris, collected 134 yards on only 9 carries! This included a 38-yarder early in the game and a 75-yard rush and sprint to the outside. The next leading rusher was only 10 yards, but, Knighton had a 75-yard TD catch and run on a short pass outta the backfield after coverage broke. Again, there is some shortcoming to this domination as Louisville ranked 112th in rushing defense last year after allowing 205.9 yards per game.

THE U IS BACK

Coming into this season, Harris was expected to be the workhorse as he followed into the footsteps of former Canes and current Seattle Seahawks RBs, Travis Homer and DeeJay Dallas. This has held true over the first two weeks as Miami maintains a lighter load for the incoming true freshmen RBs, Knighton and Donald Chaney, Jr., but hopefully the young legs can preserve Harris, who appeared to be dealing with an injury after his long TD run. Last, and certainly not least in the running attack, King is more than proving his worth as a dual-threat QB in the spread formation who is absolutely capable of getting the job done with his legs.

While it’s a good start, in order for Miami to really optimize the talent the offense needs to be clicking on cylinders. The several dropped passes by the WRs need to be eradicated in order to not only assist with the overall format of the spread offense but to improve the offense (especially considering King threw zero turnover worthy passes according to Pro Football Focus).

Similarly, Bill Connelly of ESPN noted that Miami is ranked 42nd (out of 52 FBS teams) in success rate, where the Canes offensive efficiency is only 37%. If they fix this woe, they’ll more efficiently work as an entire unit in the uptempo spread offense, where the pass game complements the rush game, and vice versa, and can fire in all areas.

Generally, however, gotta give a lot of credit to Offensive Coordinator, Rhett Lashlee, who employs a simple yet effective spread playbook. The schemes are meant to lure defenses into believing Lashlee will be running the same play by disguising the same package. Then, the Canes engage in slight changes at the line of scrimmage and execute a different strategy, which results in explosive plays (i.e. Miami engaged Louisville’s defense to expect quick slant passes that beat them earlier in the game, and then peel off the RBs outside the hash marks).

With that being said, the true tests will come in the next few weeks. Against FSU this upcoming week, the Canes will face an interior DL that should be able to disrupt the backfield. They are led by potential 2020 first round pick, DT Marvin Wilson, who is listed at 6’5”, 317lbs, as well as space-eating run stuffer, Robert Cooper, who weighs in at 332lbs. For Miami, however, some of the designed big plays have been created to flank RBs outside the hash marks so hopefully they’ll be able to scheme around the intimidating inside front.

After the FSU game, Miami faces Clemson who is an obvious challenge because they are the number one team in the nation. They also feature a stout Defensive Line led by Nyles Pinckney, Myles Murphy, and Regan Upshaw, not to mention the number one 2020 recruit and true freshman of the week in Week 3, DL Bryan Bresee. Clemson ranked 19th in 2019 in team run defense, allowing 116.3 yards per game on the ground – ranked just ahead of UAB. If Miami is playing from behind against the Tigers, the run game may need to take a backseat.

While Clemson will be an all-around challenge, I believe the true barometer of Miami’s rushing attack will come against Pitt the following week. Pitt ranked 11th in 2019 in team run defense, allowing 108.5 yards per game. The Panthers are an experienced team and return the bulk of their front formation, including Rashad Weaver, Patrick Jones II, Jaylen Twyman, and Keyshon Camp.

So, after two weeks, it does seem like this Miami run offense is top notch and could be the truth. It’s definitely a far cry from one of the best RB corps’ of all-time when the 2001 Miami Hurricanes had a depth chart consisting of Clinton Portis, Najeh Davenport, Willis McGahee, Frank Gore, and Jarrett Payton – all of whom made the NFL – but if they continue to dominate in the coming weeks against some solid run defenses, then this group is a force to be reckoned with and bodes well for Miami in future years that should include the two freshman, as well as 2020 four-star commit, Thad Franklin.

Regardless, last year the Canes ranked 120th in rushing offense as they only average 118.2 yards per game. And, even more, the U was plagued by an abysmal OL that struggled in 2019 on both pass and run protection. For 2020, Miami’s run game looks as electric as the Canes’ orange jerseys and new Turnover Chain.

Will this running success continue? With the fast-paced spread formation, it may be the necessary factor that springboards the potent offense.