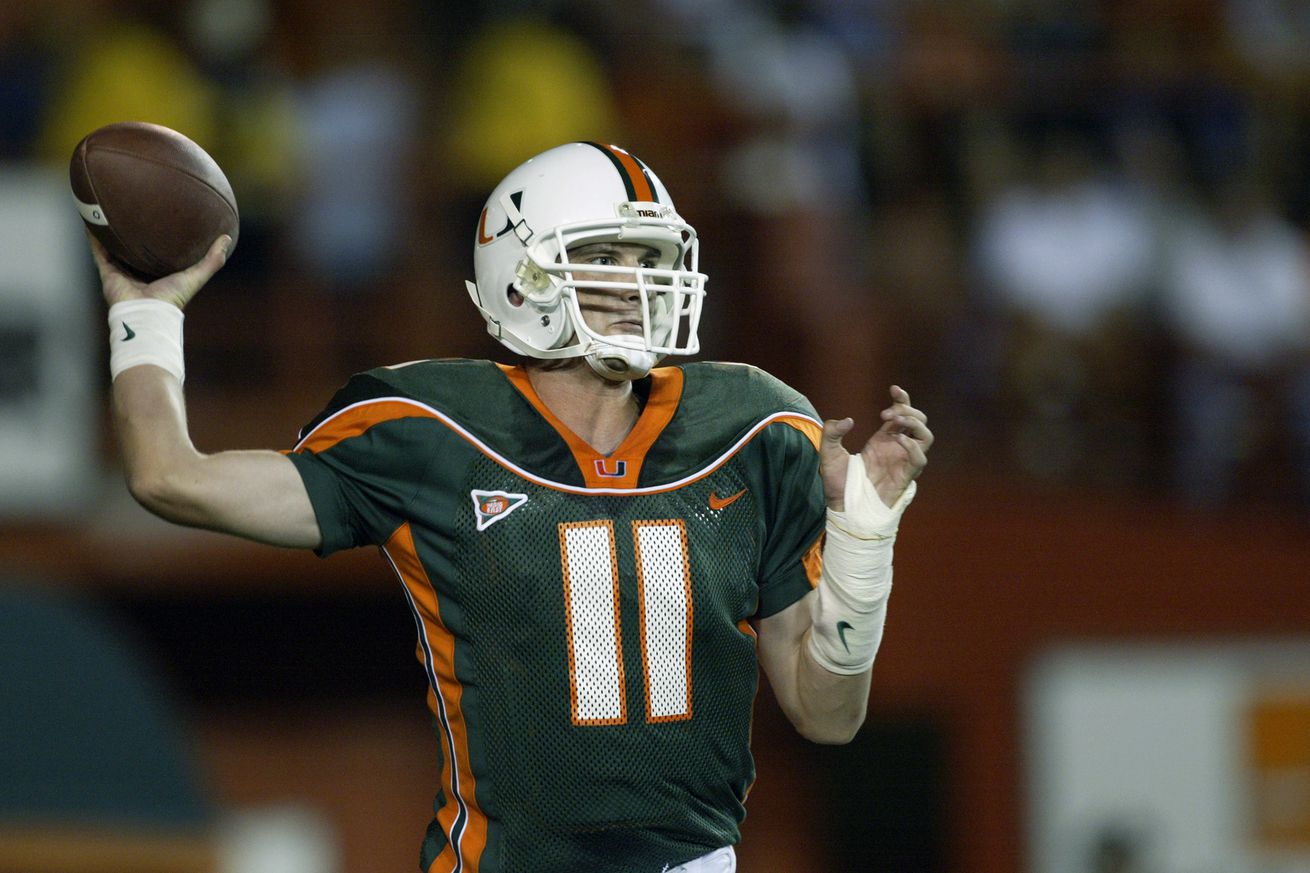 Dorsey was the ultimate quarterback for Miami

Miami has won five national championships since 1983, and each of those teams were led by a commander under-center. Bernie Kosar, Steve Walsh, Craig Erickson, heck, Gino Torretta won a title and a Heisman Trophy.

Still, when I think of the most iconic quarterback in UM history, it’s Dorsey, it’s #11. Maybe it’s different for me compared to some older Canes fans who got to watch Torretta and Kosar play at Miami. But for me growing up, watching my first Hurricanes game in 2002, Dorsey was the man, he was larger than life.

I so wish I was old enough to appreciate Ken Dorsey when he was at Miami pic.twitter.com/Z5rnQ8N5U8

The man who was 38-2 as the starter, led Miami to 34-straight victories, was 3-0 against FSU, and was the quarterback for the greatest college football team history in 2001.

Dorsey did more than just win a national championship at Miami and set records, he was an integral part of bringing the program back from the dead. UM didn’t just need a winner at quarterback at that time, they needed a leader for the entire team, and Dorsey became that guy. In the 30 for 30 The U: Part 2, Ed Reed said it himself that he and Dorsey would be running Miami’s practices during those years, not the coaches.

11 days from Miami football. Ken Dorsey @kendorsey11 lead one of the best eras of Miami football, winning the 2001 national title, going 38-2 as a starter, and breaking 11 school records. The ‘01 Rose Bowl co-MVP was a 2-time Heisman finalist and is in the UM Sports Hall of Fame. pic.twitter.com/UNTUKnEQ8t

Think about some of the players on those Hurricanes teams. Reed, Clinton Portis, Najeh Davenport, Jeremy Shockey, Santana Moss, D.J. Williams, all those guys knew that Dorsey was the man. He came into the huddle and you knew who was in charge.

When Miami was down 24-20 to #1 Florida State, a team who had beat the Canes five straight years, it was the sophomore Dorsey who led his offense down the field. A pass to Reggie Wayne here, a completion to Santana Moss there, and then he finds Shockey for the touchdown.

2000 was the first of three victories Dorsey notched against that team from Tallahassee, going a perfect 3-0 as the starter. In 2001, Dorsey and the Hurricanes snapped FSU’s 54-game unbeaten streak at Doak Campbell Stadium, as they throttled the Noles 49-27.

The following year in 2002, for one of the few times in his Miami career, Dorsey had to bring the Canes from behind. Trailing 27-14 with less than 10 minutes to go, Miami’s leader at quarterback led a ferocious comeback. First, he found Kevin Beard in the back of the end zone for a score, 27-21. Then, thanks to Willis McGahee’s 81-yard gain on a screen pass, and a touchdown run by Jason Geathers, Dorsey and the Hurricanes somehow escaped the stifling Orange Bowl that day victorious, 28-27.

When the lights were on, that’s when Dorsey shined his brightest. Whether it was Washington visiting Miami or the Rose Bowl against Nebraska, if the stakes were high, you could count on Ken. If you close your eyes, you could almost clearly see Dorsey hitting Andre Johnson in stride against the Cornhuskers for a touchdown.

Ken Dorsey to Andre Johnson. What a connection pic.twitter.com/jPmXsPAdIs

There was something that made Dorsey look even heroic out there on the Orange Bowl grass. In the early 2000’s the Hurricanes were the biggest name in college football, and every Saturday when they came out of the tunnel, Dorsey was the first one you saw.

But it was more than records when it came to Dorsey. Torretta might’ve been the better pure quarterback, Kosar brought Miami our first title, but Dorsey’s legacy is larger than life in Coral Cables, and I don’t know if any Hurricanes QB will ever top it.