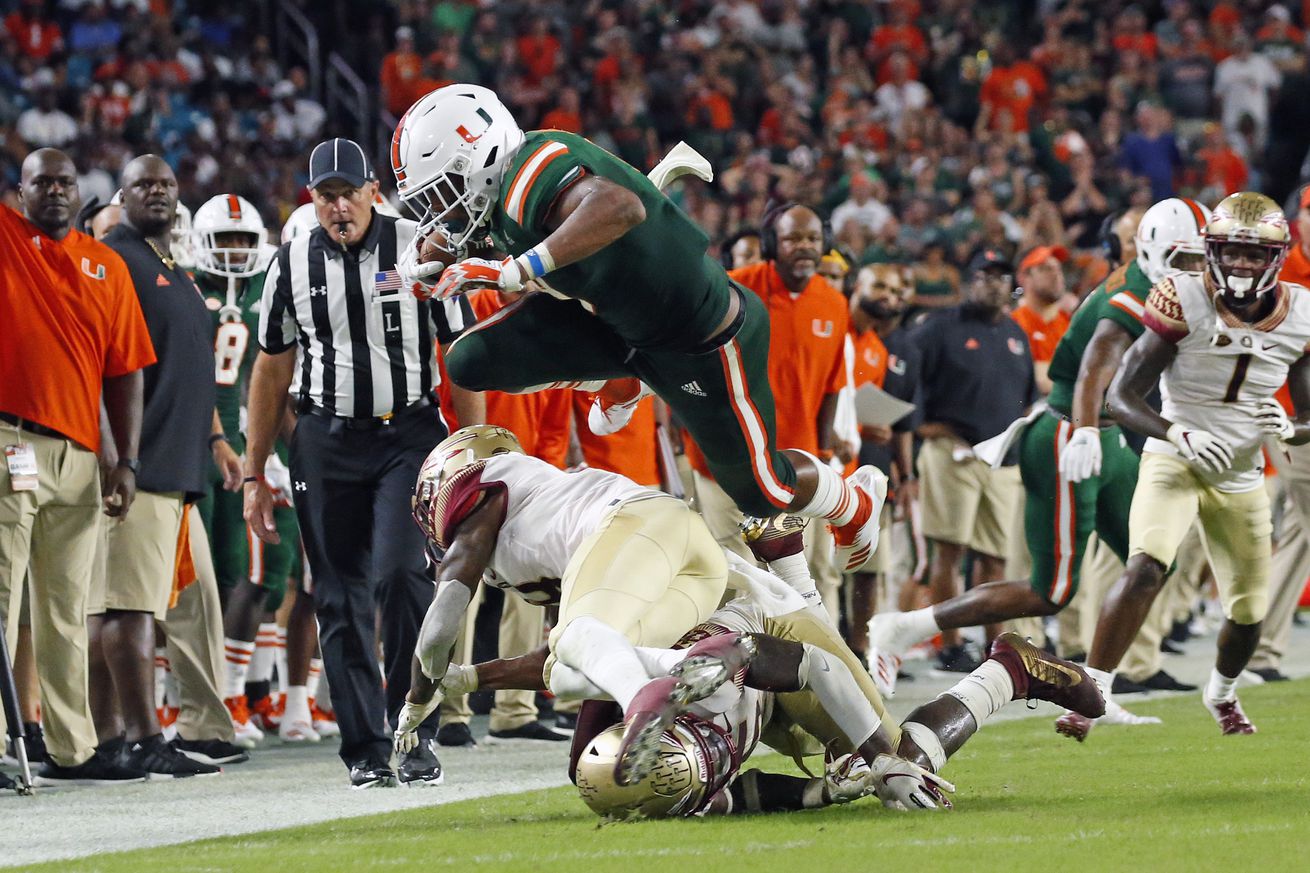 Miami must be prepared for whatever Florida State comes out with on Saturday night.

It’s easy to look at the state of Florida State University football right now and be extremely confident that Miami is going to roll to victory on Saturday night against FSU.

Not so fast. Not in this rivalry.

As it stands currently on Bovada, Miami is an 11.5-point favorite over its hated rival heading into Saturday’s game at Hard Rock Stadium at 7:30pm.

That spread and watching the three games that the two teams have played in thus far this season should tell everybody that Miami has a golden opportunity to extend its winning streak over Florida State to four games on Saturday night.

But sleeping on the Seminoles on Saturday night would be a catastrophic mistake for the Hurricanes to make.

It most certainly does not matter that Miami has won three straight in this series.

The Hurricanes will get Florida State’s best shot on Saturday night. This rivalry means too much for the Seminoles to come in unprepared.

Coming off a bye week to prepare, Saturday night will be Florida State’s most important game of the season. Miami has to be ready for whatever the Seminoles will throw its way.

In 2018, No.17 Miami kicked off against Florida State at Hard Rock Stadium as a 14-point favorite. The Hurricanes entered the game on a 4-game winning streak and averaging 44 points per game in their last four.

That mattered little to Florida State as the Seminoles jumped out to a 27-7 lead early in the third quarter. Miami had to fight back to survive and win thanks to an impressive performance by N’Kosi Perry in the second half.

Saturday night’s game reminds me a little bit of that 2018 game in some ways.

Miami is coming in as a double-digit favorite and no one seems to be giving Florida State much of a chance. The Hurricanes have the more talented roster but the Seminoles have enough talent in certain spots to give Miami issues.

The Seminoles have a first-year head coach who Miami has never faced and a veteran quarterback who has experience as a starter. The game will even be played on the exact same date, just two years later.

There are similarities pre-game between the two contests and Manny Diaz and the Hurricanes need to work hard to ensure that is where the similarities end.

Diaz is 8-7 in his 15-game career as the head coach at Miami. In three of those seven losses, Miami was a double-digit favorite. Miami lost to Virginia Tech, Georgia Tech and Florida International in 2019 as a favorite of 14 or more points.

Florida State cannot become the fourth loss to fit that mold on Saturday night. The Seminoles are reeling in Norvell’s first year and Miami needs to exert its dominance early and control the game from start to finish on Saturday night.

Justin Dottavio will tell you here why Miami will easily win this game against Florida State. My prediction is not far off from his as I believe Miami will win by double digits.

However, if the Hurricanes are complacent like they were the last time they played the Seminoles at Hard Rock Stadium, things on Saturday night may be a lot more interesting than they should be.