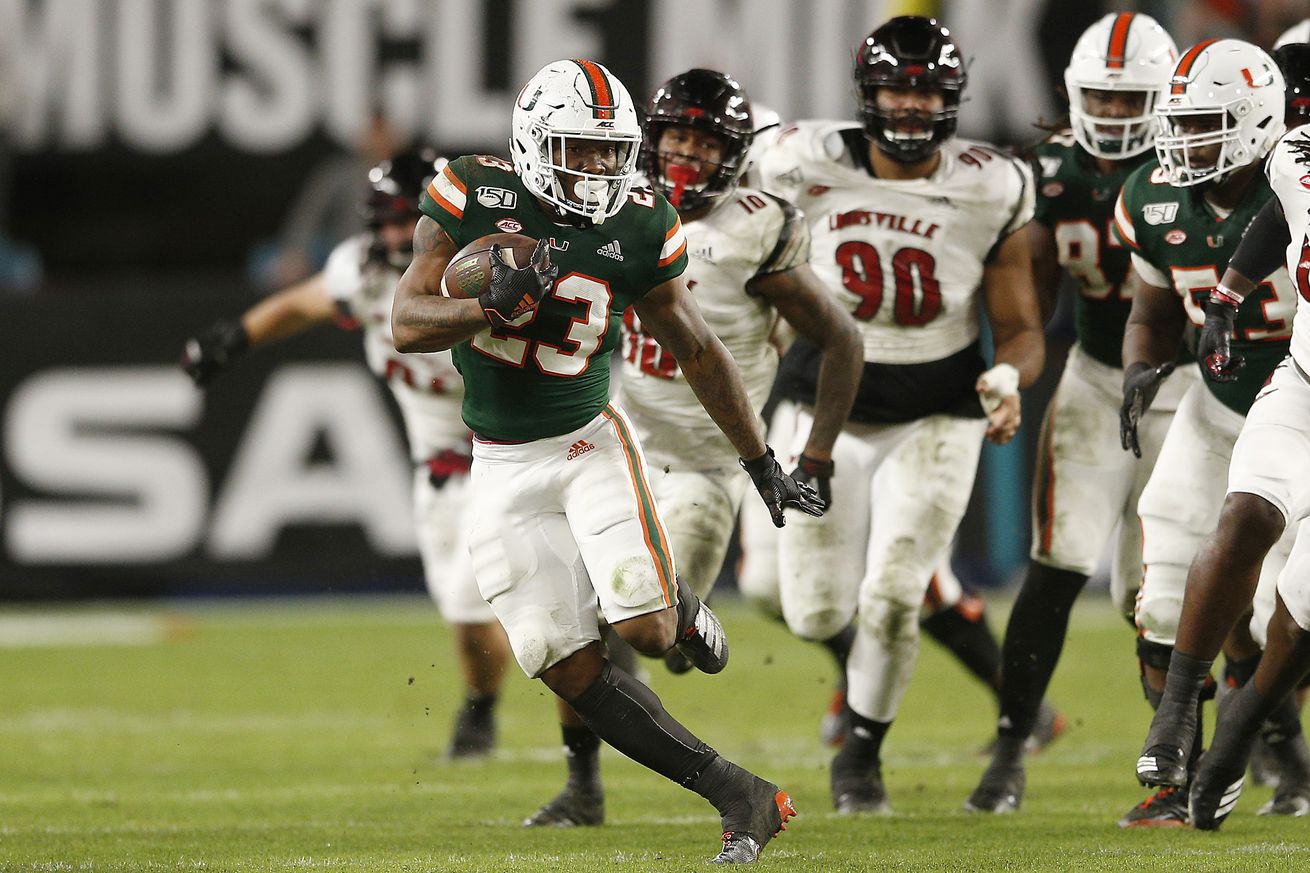 Why does Louisville worry me? Am I still worried about Miami’s linebackers? Those questions and more.

What do you think about the Louisville game? They seem pretty convinced they getting that W over us

As the weeks continue to fly by, I’m more and more concerned about the Canes week-two matchup at Louisville. Now, I know that Miami won 52-27 against the Cardinals last year, and if they weren’t able to stop a Dan Enos offense, why should I be worried now that we have Rhett Lashlee? Well, for starters, if you look at that game last season, very rarely does almost everything seem to work for an offense. I mean, Jarren Williams was 8/8 passing, for 160 yards and 2 touchdowns in the first quarter, and ended up throwing 6 TD’s. Everything on offense worked that day, the o-line blocked well, Williams couldn’t miss a receiver, it all clicked. Even with Lashlee and D’Eriq King, I don’t see that same kind of game happening again.

Jarren Williams came out slinging the ball and he didn’t stop as the ‘Canes dropped 52 on Louisville!

Also, our defense gave up over 500 yards to Louisville last year, we just came up with turnovers at the right time. The Cardinals still have some threats on offense, quarterback Micale Cunningham, running back Javian Dawkins, and of course, fast as lighting receiver, Tutu Atwell. This is a week two game, and Miami will still be trying to fit in their young linebackers and other parts of their defense. And it’s on the road, and for me, road games will ALWAYS be scary.

So to me, whichever defense flinches, will be the team that loses. On paper, the Hurricanes have a MUCH better defense, but against those playmakers, you can never be too confident. If the Hurricanes offense can put up points, and our defense can force turnovers, then Miami will come away with the victory.

DJ Ivey with 3 interceptions in the last 3 games pic.twitter.com/eaZfxHxZmz

Who do you see leading the team in sacks and interceptions?

Ask me three weeks ago, and we all would’ve picked Gregory Rousseau to lead Miami in sacks. Now that he’s gone, I’m going to say either Quincy Roche or Jaelan Phillips. It’s an easy answer, but when you remember that Roche had 13.5 sacks last season, and you hear about how good Phillips looks in training camp, there really isn’t another answer.

Quincy Roche is transferring to Miami. This kid is a stud. Already my DE1 for the 2021 NFL draft pic.twitter.com/YvKhppYkb4

When it comes to interceptions, there’s a few guys who I could see leading the Canes. I’m going to throw out three names, Bubba Bolden, Te’cory Couch and DJ Ivey. Bolden is a natural in the secondary, and even in limited action last year, he was always around the ball. Couch is the best cover-corner that Miami has, and Ivey rebounded after a rough start to the 2019 season, and ended up leading the team with 3 interceptions.

My vote is Bubba Bolden. Been saying for a long time that he has NFL talent. Even in just a few games last year, Bolden became a big part of Miami’s defense https://t.co/gvLUv4Ejur pic.twitter.com/Ycocu0UluS

How many times will we see the Turnover Chain this year?

We all remember Trajan Bandy running it back against Notre Dame, or the two turnovers that sparked a comeback against FSU in 2018, it does something to this team. Last year, with less turnovers, you got less of that excitement and magic. In 2020, I’m going to put the over/under on turnovers for our defense at 25.

How are you feeling about the linebackers now?

With Shaquille Quarterman and Michael Pinckney gone to the NFL, and Zach McCloud really the only returning linebacker on the roster with any experience, I’ve talked a lot about my worry at LB for 2020. Having said that, since fall camp began, it’s clear that several players are stepping up at the position. Speaking with the media last week, McCloud raved about how well Bradley Jennings Jr. has done coming off an injury, and that he’s been running with the first team defense. He also mentioned the progress of Waynmon Steed as well.

Blake Baker on LBs Waynmon Steed and Bradley Jennings, Jr.: “They have exceeded any expectations that I’ve had. They both looked great…They’ve really matured from a mentality standpoint. They know how quickly the game can be taken away from them…I’m so happy with those two.”

Then, we’ve been hearing a lot of good things about sophomores Avery Huff and Sam Brooks Jr. In the first scrimmage, Brooks recorded 5 tackles and a sack, and in the second scrimmage, Huff had 5 tackles and 2 sacks. Like I’ve said before, I think they’ll struggle early on in the season, but I don’t see the linebackers being a big concern as the fall goes on.

Will Xavier Restrepo have a better career than Braxton Berrios?

Everyone knows how big of a Berrios fan I am, so I love this question, because I’m also a huge fan of Restrepo, and I’ve said for a while now how X reminds me of Brax. I hope Braxton forgives me, but I do see Restrepo having a better career at Miami, let me tell you why. Berrios wasn’t a real factor in Miami’s offense until his senior year, and I think Restrepo can make a much earlier impact. We’re already seeing in fall camp that he’s adjusting just fine.

With Rhett Lashlee using a six-man rotation at wide receiver, don’t be surprised if you see a lot of the true freshman in 2020. I just think that this system will allow Restrepo to be a bigger part of this offense than Berrios was throughout his career, and also much sooner.

Rob Likens on Xavier Restrepo: “He understands ball. He understands defensive structure. Those are the guys you’ve got to have playing on the inside. … for his age, he’s way above normal.”

What is your expected win total?

When the updated schedule came out a few weeks ago, I had Miami going 8-3, with losses to Clemson, Virginia Tech and Wake Forest. However, now that Wake Forest’s best receiver, Sage Surratt, has decided to opt out of the 2020 season, I may be tempted to call that a win for Miami.

I’m still going with 8-3, but as of right now, I have the Hurricanes other loss coming to either Louisville or UNC.

Do you see Keyshawn Smith getting more playing time than Mark Pope?

I’ve been so high on Keyshawn Smith since the moment Miami stole him from Washington State at the end of the 2020 recruiting cycle. With good size at 6-1 and 182 pounds, Smith has the track-speed that sets him apart, making him a truly special player at wide receiver.

Watching film on Miami’s WR they landed on Tuesday, Keyshawn Smith out of San Diego. Great awareness as a receiver, plus has track speed. Canes got a steal here pic.twitter.com/19MVg7Pcaa

When it comes to Mark Pope, I don’t see the true freshman Smith playing more than the junior. I think Pope, although he’s been quiet during fall camp, is primed for a big season in 2020, because it’s really now or never for the former highly-touted recruit. WR coach Rob Likens has praised Pope’s skill-set, as we all have.

Rob Likens on Mark Pope: “He has freakish, quick skills.”

Pope has the potential, in my opinion, to become a star for the Hurricanes. You also have to remember, with how Lashlee uses six or more receivers in his rotation, you’ll see potentially plenty of both Smith and Pope. Though, I have Pope as one of the starting WR’s when the season opens up.

Does Mark Pope become the go to guy for the Canes in 2020? pic.twitter.com/Gm82h1BHHY