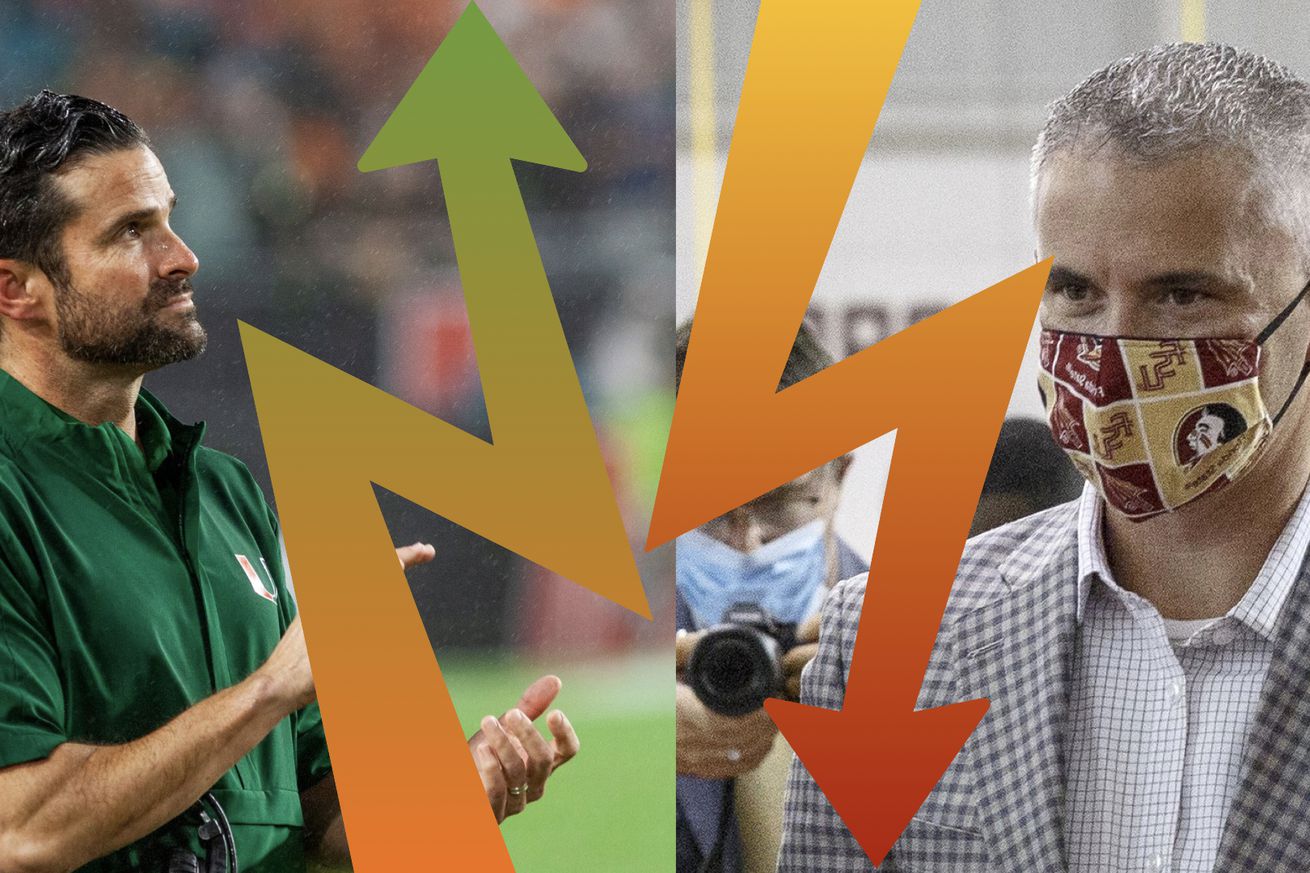 While Miami Plays With House Money, FSU Is Simply Burning Its House Down

24 hours is all that is left of the wait.

To introduce the Miami Hurricanes and the Florida State Seminoles for the 65th game in their storied rivalry.

24 hours, however, may be all that the Seminoles have left to look forward to in 2020. More so than any other season, THIS is their super bowl.

In what has been a steep slide since Jimbo left for $greener$ pastures in 2016, the Seminoles have reached the lowest point in their schools history.

Conversely, the Miami Hurricanes have seemed to finally seen the light at the end of a 19 year tunnel that has threatened glimpses of light but have only recently begun to truly climb closer to the sun.

The same time frame, since 2016, it seems the Hurricanes have been making strides, amidst an ebb and flow process, that has the program more excited than it has been at anytime since the Coker years.

How did these teams come to this point, seemingly lights years away from each other, on opposite ends of the spectrum?

A Coach Scorned and a Coach Reborn

Two coaches. Both disciples of one Bobby Bowden.

For Jimbo, it was Bobby Bowden taking him under his wing in 2007, and, unceremoniously handing the torch over after his departure in 2010 that opened the door to the Jimbo era in Tallahassee.

For Coach Richt, it was seven years of FSU service that lead to a great 14 run at the University of Georgia (Fittingly, Richt’s last game with the Seminoles was a loss to Oklahoma, 2001, in, the OG crib, the Orange Bowl).

However, in 2017, things were much different for the coaches.

Coach Fisher was at his wits end with all things FSU. And vice versa. Fisher’s relentless need for improvement in all areas exhausted the FSU administration, and their unwillingness to keep pace was losing them a championship coach, which, last I checked, are fairly difficult to come by these days.

Meanwhile, down south in Coral Gables, a prodigal son in coach Richt came home. The same overtures were Fisher was rebuked, Richt received with aplomb. New facilities, state of the art indoor practice facilities, better salaries for assistants, more and farther reaching exposure in the surrounding communities. All wishes were granted.

During Richt’s second season at Miami, subsequently Jimbo’s last in Tallahassee, Coach Richt did well to honor his former Mentor, Coach Bowden, by beating Jimbo and the Noles in his first game on Coach Bowden’s field at Doak Campbell.

This no doubt was a bit of a joy for Coach Bowden, as Jimbo didn’t allow the old ball coach around the team, another of many underlying problems at FSU.

This would prove to be a major swing in the two schools fortunes, as Jimbo took his recruiting chops with him to Texas A&M, while Coach Richt handed his down to Coach Manny Diaz during the current 3 game winning streak vs Free Shoes University.

The coaching sagas have begun to shine a light on the overall health of the Miami and Florida State programs.

Following the departure of Fisher to the Aggies, Florida State has transitioned from 2 years of Willie Taggart to new head Coach Mike Norvell. FSU came under much fire for the handling of the Willie Taggart hiring and separation. On the way in, the hiring of Coach Taggart was questioned due to the state the program was in. Jimbo left a mess and boosters felt Taggart wasn’t up to the task, especially not at 6 years, $30 Million. Yet after only a season and a half to do about 5 years of work, Taggart was fired by the boosters of FSU, with no reason other than needing a scapegoat for the failings of the administration. After those same boosters ante’d up the $18 Million to buyout Taggart, they dumped $4.4 a year into Willie Clone, Mike Norvell, minus the melanin recruiting chops (25th overall).

Trading a Taggart who has connections throughout the recruiting hotbed of Florida and through the West coast for a mid major guy with nearly zero big time college experience and no ties in recruiting was a massive fail for the Seminoles.

Simply paying Jimbo and updating the facilities (which are still massively outdated) would have likely kept them in a great spot. Instead they blew it on two wasted years with Taggart and a Norvell staff that is making waves for all the wrong reasons.

Manny Diaz stepped into the head coaching position in Miami in similar fashion to Fisher, from coordinator to head coach, and taking over for a loved coach who was ready to move on. Diaz came in to the Canes with an extremely strong resume working under noted defensive mind Chuck Amato, championship coach and current North Carolina Tar Heels coach Mack Brown, as well as working with current Florida Gators coach Dan Mullen and the previously mentioned Bobby Bowden, where he worked on the same staff with one Mark Richt.

Diaz’s resume, when compared to Taggart’s, or worse, Norvell, is like comparing the resumes of a Broward College Associates grad and a University of Miami Medical School resident. There just is no comparison.

As Florida State was balking at giving their coaches the required facilities and upgrades necessary to compete in today’s college football landscape, the supposedly stingy Miami Hurricanes administration updated locker rooms, built new fields, weight rooms, an indoor practice facility, student centers and a state of the art dormitory community that is the states best. This combined with the general pressure to succeed in Miami has had Manny Diaz in win now mode since he spurned Temple for the home team.

Diaz’s ability to learn, adjust and work with relentless improvement is nothing short of amazing. Despite a failure of first year, Coach Diaz dug deeper and doubled down on 2020, quickly replacing the failed Dan Enos project for the light speed ahead change to Rhett Lashlee. While Florida State has struggled to find quarterbacks, running backs, fans and support, Diaz and crew have found the former in droves, bring in D’Eriq King and touted prospect Tyler Van Dyke, the top two backs in South Florida’s cycle of 2020 (one of which spurned FSU), has seen crowd attendance leap over FSU in 2019 despite a venue nearly half the size, and most importantly, now has the GOAT Ed Reed working with him side by side to guarantee success and a revived culture.

Even in the first opportunity to go head to head, Diaz is prepared to see his record versus Florida State jump to 4-0 while Mike Norvell can’t even attend his first UM/FSU clash.

Both programs have been a roller coaster recently but only one seems to be on the rise.

If there was ever a time to show what kind of man a coach is off the field, 2020 is IT.

The Hurricanes have seen excellent awareness in leadership from Coach Diaz through 2020. Despite obstacles that could force his hand to bend in an easier direction, Coach Diaz dove in head first to stand for his players.

Thanks @julio_frenk & @CanesAllAccess for allowing our student-athletes to stage a protest tonight. We learned that 8:46 is a long time to be on a knee. We learned there is an evil in action & an evil in inaction. And we learned the Canes are just getting started. ✊ ✊ ✊ ✊ ✊ pic.twitter.com/jRTJT27eI3

With the civil rights movement of 2020 taking sports on in a way unseen since Muhammad Ali and Jim Brown were still in their respective sports, Manny has shown excellent awareness, supporting players like D’Eriq King, legacy Al Blades Jr and senior leader and academic Zach McCloud raise their voices and use their platform to be heard and lead student athlete in America. Coach Diaz along with the entire staff took part in multiple acts of solidarity with the team and the community, hosting an eight minute and forty-six second moment on one knee in the IPF to commemorate the movement pertaining to George Floyd’s death. Manny was even spotted multiple times marching in protest with the Miami community to show support for equality.

In the world of Covid, the staff has once again shown full support for players to opt out, featuring first rounder Greg Rousseau and quarterback Tate Martell. Along with Julio Frenk, Miami is leading the charge nationally in how they are addressing and handling Covid on campus, with nation leading protocols, even empowering the team to turn in campus offenders not adhering to those protocols.

Florida State, AGAIN, could not be more opposite. Early into his tenure, Norvell showed his tone deaf nature demanding players relieve themselves of hoodies, headphones and jewelry regularly, with little regard for civil liberties.

FSU DT and team captain Marvin Wilson says HC Mike Norvell lied about talking to every player individually about the death of George Floyd. Wilson says he and his teammates are “outraged and will not be working out until further notice.” pic.twitter.com/M3cQVteWLd

During the Floyd protests, MULTIPLE high ranking team captains, including potential Day 1 picks Marvin Wilson and Tamorrion Terry voiced strong disdain for Norvell who failed to support or even address his team surrounding the weeks of injustice. It was only when called out on social media did Norvell and staff address the team, in a weak attempt to save face.

The Covid response in Tallahassee has been equally weak. Receiver Warren Thompson lead the charge for other teammates to voice displeasure and feelings of danger over the unregulated and reckless nature behind the programs response to the coronavirus pandemic. The situation became further of a black eye when the students who spoke out about it were forced to tweet matching statements in a staged attempt to rebuild unity, only coming across as unattached and lacking leadership. Even the school has had nearly 1,000 reports of coronavirus positives following on campus tailgating prior to the opening game loss to Georgia Tech.

Mike Norvell on his positive coronavirus test and his disappointment over missing the rivalry game vs. Miami https://t.co/uPeR2Jdnwe

Cherry on top as mentioned earlier? Coach Mike Norvell will be living the ramifications of that recklessness, spending Miami Week in bed with Coronavirus (Get Well Soon Coach!)

24 hours is all that’s remaining until we reintroduce the Miami Hurricanes and the Florida State Seminoles for the 65th game in their storied rivalry.

It’s the 26,280 hours, the 3 years prior, however, that had these programs trending in totally opposite directions.

If not for universal bowl eligibility, this would have been the closest thing to a bowl game this year for the Noles.

More so than any other season, THIS is there super bowl.