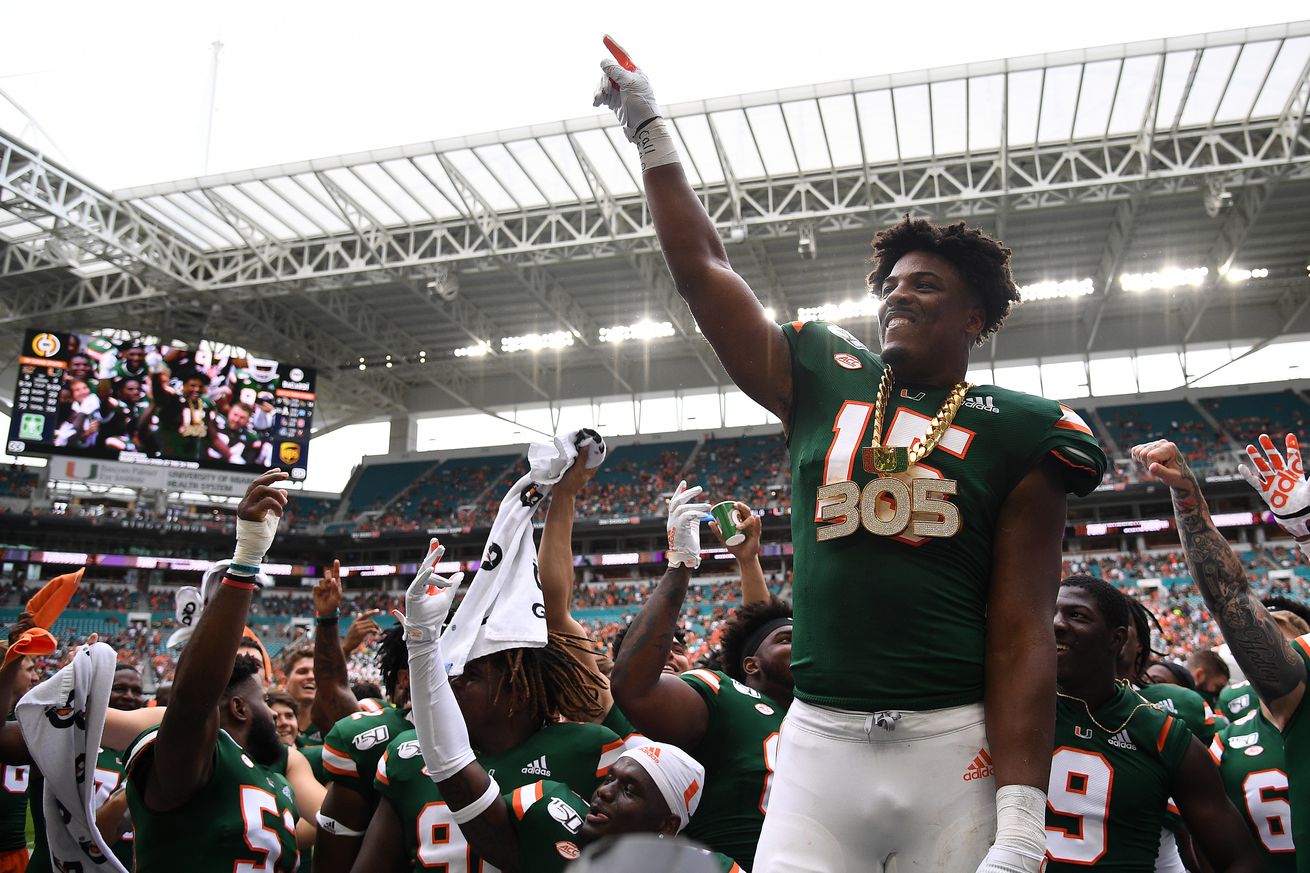 In the history of its program, Miami has produced elite defensive lineman second to no other program. If there’s a position for which Miami could claim to be the (insert positional group) U, I would think that defensive line would hit that mark as closely as any. Vince Wilfork, Jerome Brown, Calais Campbell, Cortez Kennedy, Ted Hendricks, Russell Maryland, Jerome McDougle, Daniel Stubbs, Greg Mark, and Warren Sapp. That’s football royalty.

In five years, I have to wonder if we’re going to be adding another name to that list: Gregory Rousseau. That’s awfully high praise for a guy who has only played part of one full season, but it doesn’t take a seasoned scout to recognize Rousseau brings a truly special level of physical abilities to the field.

Rousseau committed to Miami on April 22, 2017 out of Hialeah (Champagnat Catholic). He was the 15th-ranked athlete and 61st overall player in the state of Florida by Rivals.com. As a true freshman in 2018, he played in the season-opening loss vs. LSU and against Savannah State the following week. He recorded 5 tackles before missing the rest of the season with an ankle injury and taking a redshirt.

Rousseau started to garner further attention in the 2019 offseason with a strong performance just as he did in the 2018 spring game, where he had four sacks. However, he remained behind fifth-year senior Scott Patchan on the depth chart to start the season. Rather, he would see the field as a third-down, passing rushing specialist. He recorded his first sack in the opener against Florida, Miami’s only sack of the gut-wrenching loss. He brought down Sam Howell the next week in Chapel Hill. Two weeks later, against Central Michigan, he thwarted a drive deep in Miami territory with a sack and fumble recovery, which may have ultimately proved pivotal in escaping 17-12. He would record a sack in 4 of Miami’s first 5 games before finally earning the starting spot against Virginia.

And that’s when Rousseau finally started to get some attention. On a Friday night before a national audience, he was simply brilliant. Aside from bringing down UVa QB Bryce Perkins twice, he drew constant attention, with halfbacks and tight ends having to provide additional help, opening up opportunities that Garvin and others took advantage of to the tune of five sacks and seven tackles for loss on the day.

His performance against Virginia was only the beginning of things to come. At Pitt, Rousseau helped anchor a blue-collar effort from the defense in stealing a 16-12 win, with 7 tackles and 3 sacks. The following week at FSU, Rousseau put up perhaps his best game of the season, absolutely rag-dolling FSU offensive lineman and finishing with 8 tackles, 5 tackles for loss, and 4 sacks. That’s as good of a performance by a defensive lineman in Miami’s biggest annual game as I can ever remember. I mean….just look at this…..

This game really showed how Miami can utilize Rousseau all over the field. He lined up inside and on the edge. He rolled from the middle around the outside and got a sack. He abused the poor tackle trying to block him one on one. He beat a guard and tackle trying to work together to stop him. A guard tried to cut him on one of his sacks, and Rousseau kept his hands in front of him and ushered him to the ground before moving around him to bring down FSU QB Alex Hornibrook.

And it was that last move that really stuck out to me. Rousseau’s arms remind me of another former Miami great, the aforementioned Hendricks, who was nicknamed the Mad Stork because of his long arms and lengthy frame (6’7”). Hendricks was a pass rushing terror, using his long, wiry frame to terrorize opposing quarterbacks. I mention a resemblance because Rousseau’s arms are long and he uses them well to his advantage. Whether slapping a lineman’s arms aside while blowing by or extending them to keep his blocker at bay, he’s shown an uncanny ability to use them to put himself in the best position to make plays, rather than just rely on power. And that’s with one full season of work. I mean….buddy. He certainly has room to grow and improve, but it seems to me that he’s ahead of his age in that regard.

Making matters worse for opposing offenses in 2020 is transfer DE Quincy Roche, who came in as the best available defensive lineman in the portal. Having a counterpart as good as Roche is only going to provide more opportunities for Rousseau. Following the obvious conundrum of having to decide which of Rousseau or Roche to leave alone on a tackle, some offensive coordinators are probably going to have to change their play calling and philosophies to account for constantly having a defender in the backfield. Formations will have to change. Deep route patterns become more difficult to implement. In turn, the game stays in front of the defenders. That’s the domino effect that having a truly great defensive end can create. And with a line also includes Jaelan Phillips, Chantz Williams, Nesta Jade Silvera, etc., the sky is the absolute limit for this group – and Rousseau – this year.

2020 will quite possibly be the last time we see Rousseau in a Canes uniform (so I REALLY hope we can have a season this fall, if it can be done safely), as he will be eligible for the 2021 draft and is already getting a ton of love from the mock draft pundits. In fact, after Justin Fields, Trevor Lawrence, and Oregon OT Penei Sewell, he’s getting a lot of attention as the next highest selected prospect in the draft. USA Today has him at 2, as does Walter Football; Sports Illustrated has him at 3; the Sporting News and CBS Sports have him at 4; and the Draft Network has him at 5. If he can continue to generate the same numbers as 2019 (54 tackles, 19.5 TFLs (T-7th), and 15.5 sacks (2nd)) over a full season this fall, it’s hard to see how NFL GMs won’t be far behind in their evaluation of Rousseau.

I’m looking forward to watching Rousseau have an All-American-caliber 2020 season, and then making Miami proud by becoming the next great Pro Cane on Sundays. Go Canes!