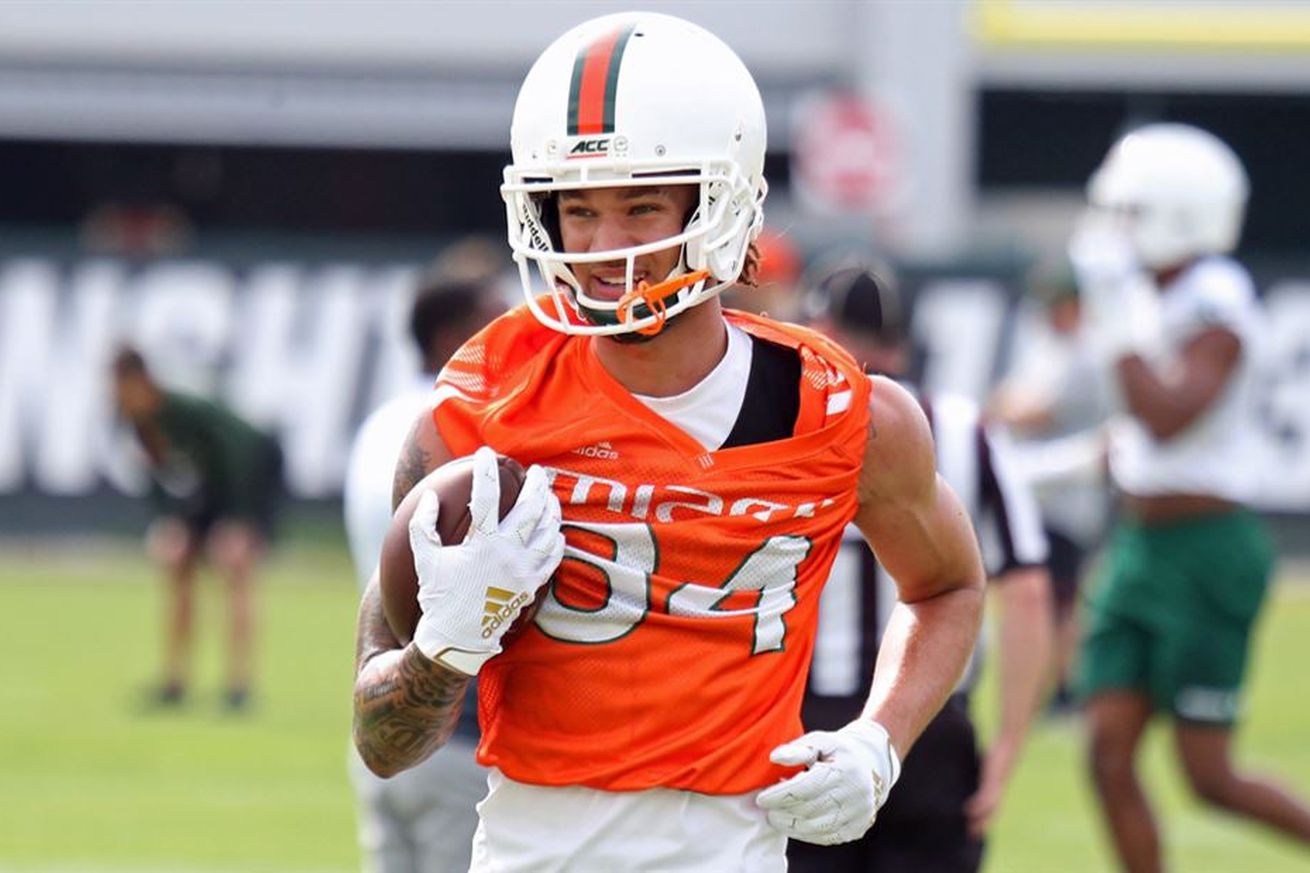 One of the more intriguing position groups for the Canes going into the season should be WR. Specifically, they have three key departures in K.J. Osborn and Jeff Thomas to the NFL, as well as Brian Hightower through the Transfer Portal. On the flip side, Miami welcomes numerous freshman WRs in Michael Redding III, Keyshawn Smith, Xavier Restrepo, and Dazalin Worsham.

The latter of which, Dazalin ‘Daz’ Worsham, has gone relatively under the radar this offseason, but Daz definitely has the potential to dazzle as a young sensation.

How Daz Ended Up at The U

As an Alabama native, Daz, as a four-star recruit, appeared to be a lock to land with the Crimson Tide. However, as I recently wrote about Sophomore CB, Christian Williams, believe it or not, even Alabama recruits flip.

Daz initially committed to Alabama in April 2018. It appeared like a foregone conclusion that Daz would end up at Bama, who he was a fan of while growing up in the state. He also began to forge relationships with Bama players and coaching staff.

However, the tide appeared to turn as the 6’1”, 175lb WR de-committed from Bama in June 2019. Over the next few months, Miami and Bama remained in his top two, but Daz ended up committing to the Canes in November 2019 and signed in December 2019, completing the flip. The pluck out of SEC Country, as well as from Saban and company, also came over offers from Auburn, Clemson, Florida, Texas A&M, LSU, and Georgia.

The U looks great on Daz. pic.twitter.com/w02H6SzwfL

Dazalin’s Skills and Style of Play

At Hewitt-Trussville High School, Worsham was a production powerhouse and put up monster numbers on his way to an Under Armour All-American Game selection in 2020. Daz hauled in 54 passes for 427 yards and six TDs as a Senior, but during his entire career, totaled 215 catches for over 2,400 yards and 28 TDs at the varsity level. He was eighth all-time in receptions in Alabama high school history.

By analysts and coaches, Dazalin has been praised most for his dazzling route running. Miami’s WR Coach, Rob Likens, has already spoken highly of Worsham’s pure route-running ability by saying during fall camp that he is “ahead of a lot of freshman at this point in time.”

Canes WR coach Rob Likens says he thinks both Keyshawn Smith and Xavier Restrepo have the ability to get into games this season. On Daz Worsham, “He runs probably, right now, if I had to grade them as pure route runners, Daz is ahead of a lot of freshmen at this point in time.”

Besides his ability to work out of his breaks on routes and to create separation, he displays good quickness and explosiveness. Despite specializing in getting down the field and behind the secondary in high school on deep plays, Daz can really operate anywhere out of the route tree and shows reliable hands, as well as a top notch YAC-ability.

One of the things Daz had to work through was offseason injuries, including a hip surgery going into his senior year. However, he was able to stay mentally tough and effective. To that point, he has been noted as a hard worker who puts in a lot of work at practice.

During spring practices, it sounded like the coaches wanted to assimilate Worsham in slowly.

Likens stated “Daz had some flashes of some really good athleticism. He caught a deep ball over on the right side. We kind of moved him a little bit to try to find his best place with which side he was going to be on and all that stuff. He’s coming off a surgery he had as well so we got him in pieces, we didn’t want to rush him, but I was pleased with some of things I saw out of him with his athleticism and he’s got some speed.”

Daz is currently listed behind Mark Pope and Jeremiah Payton at WR-Z on the depth chart, both of whom put up big numbers in the Canes most recent Spring scrimmage. There is a slim chance Worsham is red-shirted, similar to Payton last year, which would assist with his continued growth and provide time for him to bolster up his relatively smaller frame.

However, if Daz is utilized, he will certainly be implemented in short-area situations such as screen plays and quick slants, or underneath routes out of the inside. Even if it does not occur in his first season, Daz’s route running will be a fun sight to see for the next few years at the U.