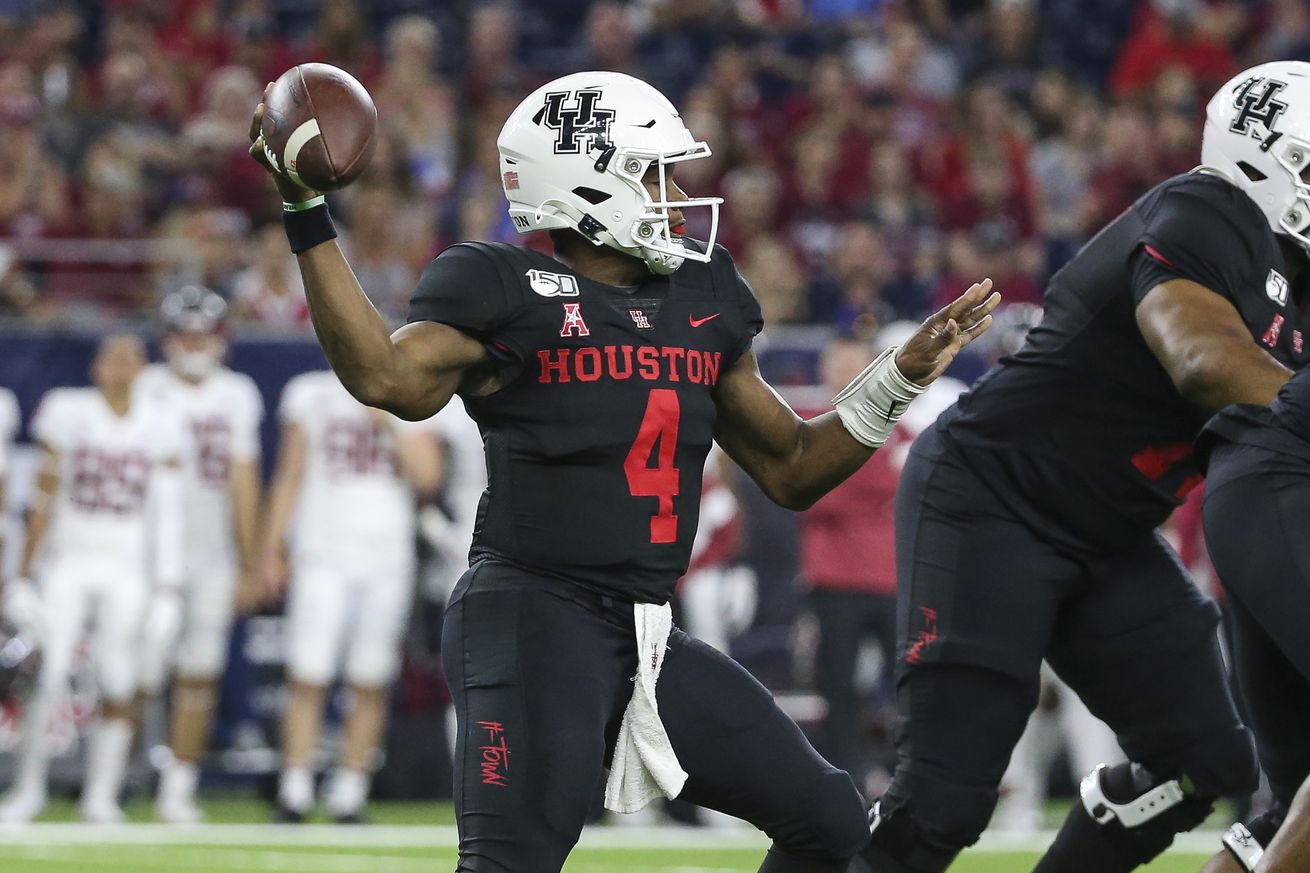 The Miami Hurricanes will take the field on Thursday night against UAB with a roster that only vaguely resembles that of last season. While many new impact players have arrived both from the 2020 recruiting class and through the transfer portal, The Canes have also lost their share of difference makers from 2019 due to graduation, NFL aspirations and health and injury concerns. Many positions have seen a complete overhaul in personnel from last season and we’ll take a look at which of those may see the biggest improvements and which have the biggest question marks going into this upcoming season.

The transfer portal has been very fond of Manny Diaz and the Miami Hurricanes in recent off seasons and that affinity only grew stronger this year with the Canes landing arguably the best transfer class in the country. The crown jewel of transfers this year was former Houston QB D’eriq King, who chose the Canes over many other high profile programs. The quarterback position for the Canes has been full of uncertainties, inconsistencies and under performance for years now, but that may all stop this year. King brings new hope and an incredible skill set to a Miami team who last season featured an abysmal display at the quarterback position filled with inaccuracy, poor decision making and a handful of off field issues capped off by a final 3 games where Miami completed under 45% of its passes for just 187yds/game while throwing more interceptions than touchdowns.

In his last nearly full season, King threw for over 270yds/game while rushing for an additional 674 yards and scoring 50 total TDs before getting injured during the 11th game of the year. To put that into perspective, Malik Rosier recently set Miami’s single season touchdown record with 31 in 2017. King has a strong, accurate arm and might be the fastest quarterback the Canes have ever had. That combination of arm talent and athleticism has King as high as 3rd on many oddsmakers’ Heisman lists. Coupled with Rhett Lashlee’s offense, King has the chance to put up some historic numbers as the leader of this Canes’ scoring attack and will provide a massive step up from the quarterback play Miami fans have watched the past few years.

Another position where Manny Diaz dipped his hand into the transfer portal was kicker. Miami was historically bad in the field goal kicking department in 2019. Bubba Baxa made just 5 of his 10 attempts and only 88% of extra points. This poor kicking display killed the Canes, who lost 5 games by less than a touchdown and often had to go for it on 4th down due to lack of trust in their kickers. Miami never even attempted a field goal of over 40 yards after week two of last season. Baxa has since transferred to Houston and in steps Jose Borregales from FIU.

Borregales, whose younger brother is committed to Miami and one of the best high school kickers in the country, made the short trip to Coral Gables from FIU following 3 straight solid seasons that landed him on the Lou Groza Award watch list the past two years. Borregales leaves FIU as the all time leading point scorer in program history and brings with him a big leg that went 3 for 3 against the Canes last year including a make from 53 yards out. Borregales has been above 72% on field goals all 3 years including over 83% in 2017 and has made 98% of his PATs. The addition of Borregales will definitely help the Canes’ chances in close games and give the coaches more confidence when calling plays inside the opponents 40.

While the quarterback and kicking rooms got some much needed boosts this offseason, other position groups saw tons of talent walk out the door. The Canes’ roster overall for 2020 looks much deeper and more talented than it did a year ago, so these positions where the most talent was lost can easily still match or beat last years performance if some of the newcomers and veterans step up. These positions have the biggest question marks going into this year.

While Miami has two extremely talented defensive end transfers taking the starting spots this year and a deep group of young, skilled players behind them, it is hard to ignore the players they lost at that position. The Canes don’t have a single defensive end that has recorded a sack in a Miami Hurricanes uniform. Miami lost Trevon Hill who recorded 4.5 sacks last year, Jonathan Garvin who recorded 10.5 sacks over the last two years and was drafted by the Packers, and in the teams biggest loss of the offseason, future first round pick Gregory Rousseau opted out due to Covid-19 concerns and to prepare for the NFL after recording a whopping 15.5 sacks last year. Between the departure of those three, along with veteran Defensive End Scott Patchan, who transferred to Colorado State, Miami will have to replace 27.5 sacks from the defensive end spot last season.

Miami will be trying to replace last year’s plethora of pass rushers with a combination of experienced transfers and highly touted underclassmen. Leading the way for Miami at the defensive end spot this year will be two transfers, Quincy Roche and Jaelan Phillips. Roche has 26 career sacks and his 13 sacks at Temple last year make him the 2nd highest returning sack leader in the country. Roche, at 6’4-245, has an impressive array of pass rushing moves and lots of experience using them. Landing him was vital if Miami wants to try to replicate the success of last year’s pass rushers.

Lining up on the opposite side of Roche will be UCLA transfer Jaelan Phillips. Phillips was the former overall number 1 ranked recruit in the country and started his career looking the part, recording 3.5 sacks in the first 7 games of his freshman year. After an injury and disagreements with the UCLA coaches, Phillips appeared in just 4 games in 2018 before transferring to Miami and sitting out the 2019 season. Phillips looked a little thin when first arriving in Coral Gables and the time off concerned many, but after a year in the weight room with Coach Feeley, the former 5 star is now back to an impressively ripped 6’5-266. Jaelan Phillips has turned many heads in camp and if he can return to the form that had him ranked as the 1 player in the country he could have a huge year.

These two big time transfers will have to lead an otherwise young group of defensive ends. The 5 other defensive ends listed on the depth chart include 3 true freshman, a redshirt freshman and a redshirt sophomore. Redshirt freshman Jafari Harvey is most likely to make the biggest impact of the players listed behind Roche and Phillips. Miami, as usual, has a very talented group of defensive ends, but replacing the top 5 sack leaders on a defense that finished top 10 in the country in sacks will be no easy task.

Much like the defensive end position, Miami still has tons of skill at the wide receiver position, but will be trying to replace their most reliable receiver from last season as well as their most explosive receiver. Unlike the defensive end spot, Miami will be turning to some experienced players already on the roster to step up and fill the voids. The Canes lost leading receiver K.J. Osborn to the NFL where he was drafted by the Minnesota Vikings. Osborn was a transfer from Buffalo who provided some much needed experience and consistency along with over 500yds and 5TDs in his 1 year with the Canes. Osborn seemed to be the WR the Miami QBs trusted the most and came up with some big catches late in games. Miami will also be looking to replace speedster Jeff Thomas, who despite his off field issues, averaged over 15 yards per catch in his career and was Miami biggest deep threat.

Miami’s starting receivers in 2020 will have to take the next step to replace Thomas and Osborn and have the experience to do so. Senior receiver Mike Harley along with juniors Dee Wiggins and Mark Pope will take over the starting roles for the Canes. Harley is extremely quick and a great route runner and could end up as the Canes’ leading receiver this year. Harley finished last year with 485 yards and 3 TDs and appeared to have a breakout game against Louisville where he totaled 6 catches for 116yds and 2TDs. Wiggins had a solid season last year with 20 catches for 335yds and 4TDs including a big time deep touchdown against FSU. Mark Pope was one of the highest rated WRs in the country and has incredible speed, but has been relatively quiet in his two years at Miami other than some minor occasional flashes. Much of this could be due to the rocky quarterback play and poor deep ball accuracy last year, but he certainly has the talent to have a breakout season.

The young wide receivers on Miami’s roster have also turned some heads this off season in camp. Redshirt freshman Jeremiah Payton as well as true freshmen Keyshawn Smith, Michael Redding III, and Xavier Restrepo have all been impressive in camp and in the scrimmages thus far. Miami’s veteran starting wide receivers along with the stable of young guys behind them could have a very big year in the new offensive system and with D’eriq King slinging the ball around, but it will take a lot of guys stepping up and erasing the question marks left by last year’s departures.

The transfer portal, early departures, Covid-19 and more have led to vastly different rosters for many teams this year. The losses of players like Gregory Rousseau and K.J. Osborn obviously hurt, but were at positions were Miami has brought in or built up depth to try to replace them. Additions of players like D’eriq King, Jose Borregales and Quincy Roche this off season were instrumental in greatly improving positions of need for the Canes. Overall, I feel like this Miami roster is deeper and more talented than last year’s and partnered with the new offensive coaches, should lead to a far more successful 2020 season.