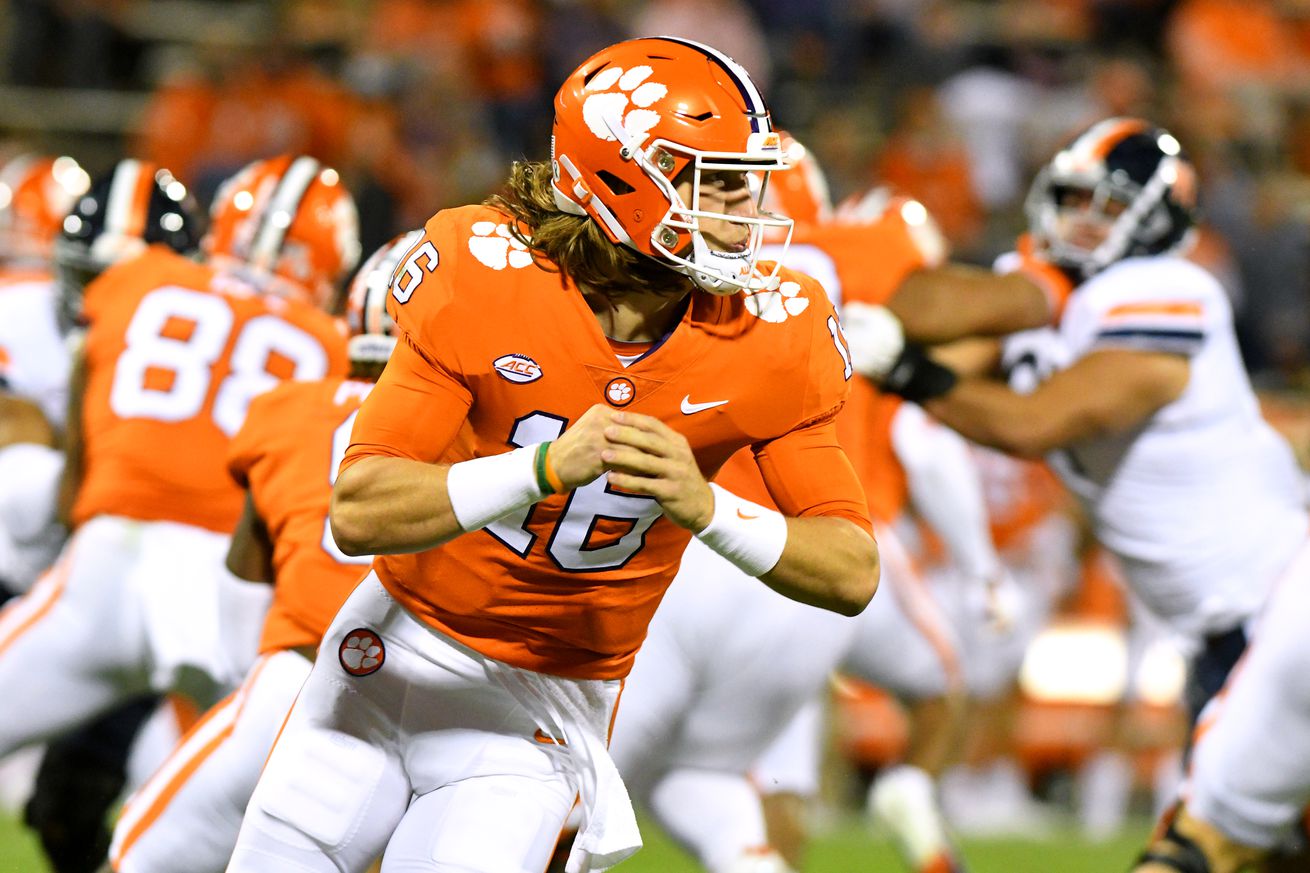 Everybody knows Miami’s the underdog, or David if you will, this week. So, let’s talk about Goliath.

Hello again, Canes fam! We’re back for another opponent Q&A. And this is a big one. Because this game is a big one.

Joining us today to talk about his beloved, and very VERY good, Clemson Tigers is Ryan Kantor. He’s one of the editors over at our SB Nation sister-site Shakin’ The Southland.

I returned the favor and answered some of Ryan’s questions about Miami and you can see that conversation here:

Miami at Clemson Preview: Q&A with @UnderwoodSports from State of the U https://t.co/3P0cIp8iKD

Now, it’s our turn. Let’s talk about the bullies on the block at this time. Ryan, tell us about Clemson, would ya?

Q1. We have to start at the top with your generational QB. Evaluate Trevor Lawrence’s play so far this year. What are his strength and weaknesses (if he has any)?

Bonus – Does he like the nickname Sunshine or nah?

Ryan: Trevor Lawrence has taken his game up another notch. Last season, the ACC was weaker than usual and Lawrence had wide receivers Tee Higgins and Justyn Ross at his disposal on the outside. The offense largely consisted of Lawrence lobbing it to them and letting them beat DBs. It worked up until they faced Jeffrey Okudah (the best college DB I’ve ever watched) and Derek Stingley Jr. in the playoff.

It wasn’t just a matter of play calling. Alex Rollins did a great breakdown of how Lawrence missed opportunities over the middle of the field. This year, Lawrence isn’t missing those opportunities. The return of TE Braden Galloway and pass catching improvement from RB Travis Etienne has helped that cause. Trevor Lawrence is the only FBS QB with 7+ passing TDs and no INTs. I believe he will win the Heisman.

As for weaknesses, he hasn’t sensed the rush very well this year which has led to a couple of sacks. Sometimes you’ll see a pass rush fail to get to a seemingly immobile QB because they know when to step up or sidestep. Trevor is mobile, but is still developing that ability to feel the rush while looking downfield. And Sunshine? I don’t know what he thinks, I but I love it.

Q2. Travis Etienne is incredible. Two part question: how in the WORLD did y’all get him to stay in school, and is his elusiveness or speed his best athletic trait?

Ryan: Etienne is such a supreme talent and likable kid. What a pleasure it is to watch him for one more season. Supposedly he had promised his mother he’d get his degree and wanted to stick to that promise. It also didn’t hurt that the NFL failed to give him a first round grade. It’s tough for a running back to earn one (Clyde Edwards-Helaire (LSU) was the only RB taken in the first round this year), but hopefully he is able to do it with an extra year of experience and the aforementioned improved pass catching.

Q3. Clemson always has a bunch of super talented 6’4” WRs. Who is it this year? Miami native Frank Ladson?

Ryan: Absolutely! There was a lot of talk about redshirt senior Cornell Powell and Sophomore Joseph Ngata being that guy, but it’s been Frank Ladson. Ladson has the speed-height blend that makes him a major deep threat. He is average 19.9 yards per catch!

Q4. Clemson’s Offensive Line has been maybe a bit questionable this year. What’s going on up front?

Ryan: Clemson is replacing four starters up front, so a few speed bumps along the way should be expected. Clemson has yet to form a line that can consistently plow over teams and create gaping holes for their running backs like old school Alabama, and perhaps this won’t be the year that happens as I had hoped. Nonetheless, I think some of the concern with the starting unit coming out of the Virginia game may be overstated. Depth, however, is a major concern.

Q5. Brent Venables is a great DC. What is the overall scheme the Tigers employ on that side of the ball?

Ryan: Coach Venables runs a fair amount of Cover 4, relying on corners to lock down receivers and safeties to cover TEs and slot receivers. Of course, with potential rain and a major running threat at QB this could certainly be different on Saturday.

Q6. Clemson may have lost some household names recently from the starting lineup of the defense, but there’s never a shortage on talent. Who are the standout players to know heading into this game?

Ryan: DT Tyler Davis missed the last two games and Virginia seemed to really benefit from his absence. Cam’Ron Harris is a great back and I worry about the damage he could do if Davis weren’t back and healthy. Fortunately, all indications are that Davis will return for this one. Look for #13 on the defensive line. He may be the Tigers best player on defense.

LB Baylon Spector is a redshirt junior, but a first year starter. He leads the team in tackles and is really establishing himself as a big part of the defense. #10 Spector is another player to watch.

Q7. Clemson’s LBs/DBs will face a tough task trying to contain Miami TE Brevin Jordan (the best TE in America). How will they approach that challenge?

Ryan: I think this is a big concern for the Tigers. Sophomore safety Lannden Zanders is a first year starter and got beat a few times against Virginia. I don’t think there’s reason to think he is a weak link or anything of that sort, but he is unproven and going against the best TE in the ACC (I have to imagine Kyle Pitts at UF is the best in the country thus far) will be a tough task if and when Zanders is covering him. It’ll be a great testing ground though. Zanders is the one with the Troy Polumalu haircut so you won’t miss him.

Q8. Andrew Booth Jr. had that INSANE interception last weekend. Is he the best DB on the roster or do you have someone better than THAT!?!?!

Ryan: Booth is a true sophomore and former 5-star prospect (247 Sports). The game against Virginia was the best in his career. It’s encouraging to see him begin to emerge as a big time contributor. He isn’t the #1 cornerback though. That is WR-turned-CB Derion Kendrick. AJ Terrell was the #1 cornerback last year and now Kendrick ascends to that role with Terrell on the Atlanta Falcons. Booth has loads of potential though and is definitely someone Clemson fans are excited to see develop.

Q9. What factor, if any, do you think Special Teams will play in Saturday’s game?

Ryan: Clemson’s special teams have been mediocre the past few seasons, but this year it is off to a torrid hot start. BT Potter is perfect thus far on field goals, Will Spiers’ punting seems improved, and to top that off, Lyn-J Dixon returned the opening kickoff 52-yards last week. Obviously, special teams could play a big part if rain turns this into a field position game, and I’m less concerned about that then I would have been in years past.

Q10. Okay, before prediction time, I have to take a dark, depressing walk down memory lane: Clemson has beaten Miami by a combined 96-3 over the last two games, including the worst loss in program history – 58-0 in 2015. Do you think this will be a more competitive game or is it blowout city again?

Ryan: It’s hard to say with any confidence. Clemson has blown out Wake Forest and The Citadel, but Virginia stuck around and kept it competitive. Was that Clemson playing below their standard or should we expect teams of Virginia’s ilk to be competitive with this year’s Tigers team?

Miami has looked great, but Louisville has a bad defense and Florida State is just plain bad all-around. As a result, it’s even harder to get a feel for the Hurricanes. I’ve watched each of the Miami games and they look like a legitimate top 10 team to me. I think if Clemson plays like they did last week, Miami is good enough to beat them.

Q11. Call your shot: give us your game prediction and score.

Ryan: I’m going to guess that the sluggish effort against Virginia is a wakeup call and not a sign of who this team really is. As such, 38-21 Tigers!

Thanks to Ryan for joining us for the Q&A this week. You can check out his work, and the work of other talented writers covering Clemson sports over on Shakin’ The Southland.