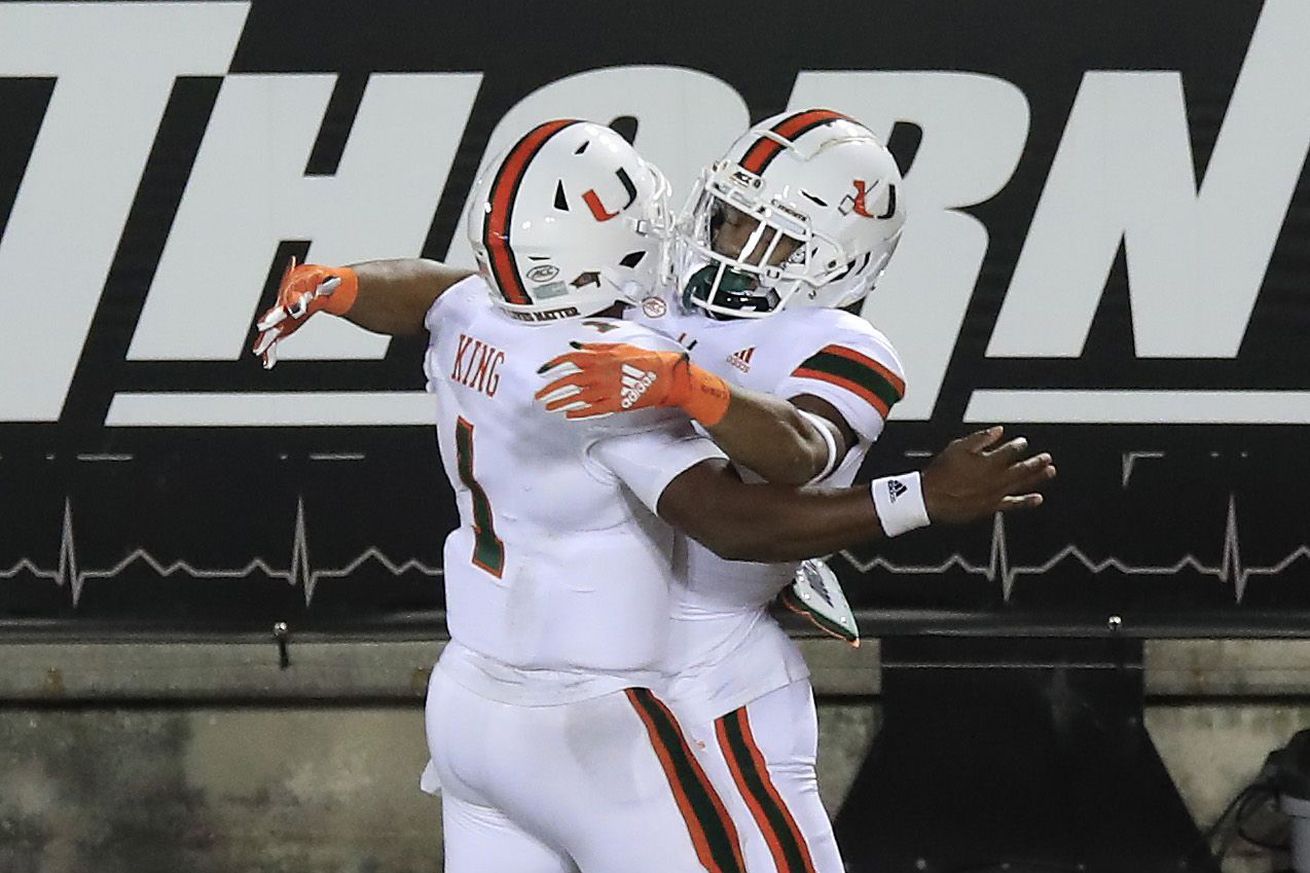 On a combined roster, you’d see a lot more orange and green than garnet and gold in the starting lineup.

I’ve done this piece the last few years, (last year’s version here) and it was generally well received. So hey, it’s Miami-FSU again, so let’s bring this piece back for another year.

Here’s the general premise: If you combined the Miami and Florida State rosters, who would start at each position? There is always an argument of “how many players from (rival team) would start on (person’s favorite team)”, and it’s always engaging and fun.

With that being said, here’s how I see things at each position on the field heading into the 2020 installment of the Miami-Florida State rivalry:

King is one of the handful of best QBs in the country. This was an easy decision.

The best RB on either roster gets the start. Miami’s backup RBs Jaylan Knighton and Donald Chaney Jr would be next up on the rotation too, for those wondering.

Here’s a position where FSU finally cracks the starting lineup. Terry is a monster. Thompson has the combination of size, speed, and potential and increasing skill, too. Harley is the starting slot on Miami’s roster and better than FSU’s slots, so he starts as well.

If there’s a P5 team with a worse OL than FSU, I haven’t seen them. Miami’s starting 5 starts. I wouldn’t touch any of FSU’s OL with a 10ft pole.

There’s an argument to have Quincy Roche instead of Phillips, but I’m going with length and athleticism here. Kaindoh is 6’7” and the best DE on FSU’s roster, and Phillips is 6’6” and was once the #1 recruit in America. They’ll start for me. And, for the record, it Gregory Rousseasu would have started easily if not for the fact that he opted out of this season.

Wilson is the best player on FSU’s roster and a future 1st round NFL Draft Pick. Silvera is a different kind of player than Wilson, and his quickness is a weapon, and we’ve seen that from Silvera this season. Good starting group, and plenty of quality depth between these teams on a combined roster.

McCloud is a 5th year senior and Rice is a very athletic and talented player. They start this year, but there are plenty of younger players who would see the field due to their athleticism and potential.

I wanted to start Hamsah Nasrildeen here, but he’s working back from missing the opener, so I went with Lars-Woodbey, who is a level above what Miami has at this hybrid position this season.

Oh hey look, HS teammates from Ft. Lauderdale (FL) St. Thomas Aquinas get the start on the same field together again. Cool for them.

Bolden and Hall are the best Safeties on Miami’s roster, and with Lars-Woodbey and Nasrildeen listed at Buck, they get the start, JUST LIKE THEY SHOULD DURING MIAMI’S GAMES BUT I DIGRESS.

Best Kicker in the Country.

He’s a badass, and one hell of a punter.

Give me explosion at KR, please. Knighton and Corbin fit that bill, even if they’re not the primary starting KRs on their respective squads. Coaches can be dumb sometimes.

This year, a 2-to-1 disparity in numbers fits for where these programs are currently. I’m sure FSU fans will think it should be closer to the 17-11 from last year or even more towards their favor, but that’s simply not the case. Miami has a better and more talented roster than FSU does, both at the top-line level and in terms of depth (with the exception of cornerback, but we knew that already).

Furthermore, Miami has far and away the most dynamic player that will be on the field this Saturday evening: QB D’Eriq King. He’s not 2013 Jameis Winston or anything, but King is a cut above what we’ve seen from Miami at QB recently, and all 3 of the previous QBs beat the Noles in that last 3 years. When you factor in one of the players that is giving Miami the talent advantage is King, and that advantage grows pretty substantially.

In any event, regardless of the clear disparity in talent in this combined starting lineup, I fully expect Miami to get FSU’s best shot this weekend. I just don’t think FSU’s best shot is good enough to beat Miami this year, absent an FIU-like performance from the Canes.

Agree with my Miami-FSU merged roster starting lineup? Disagree with one (or more)? Hop in the comments and state your case.