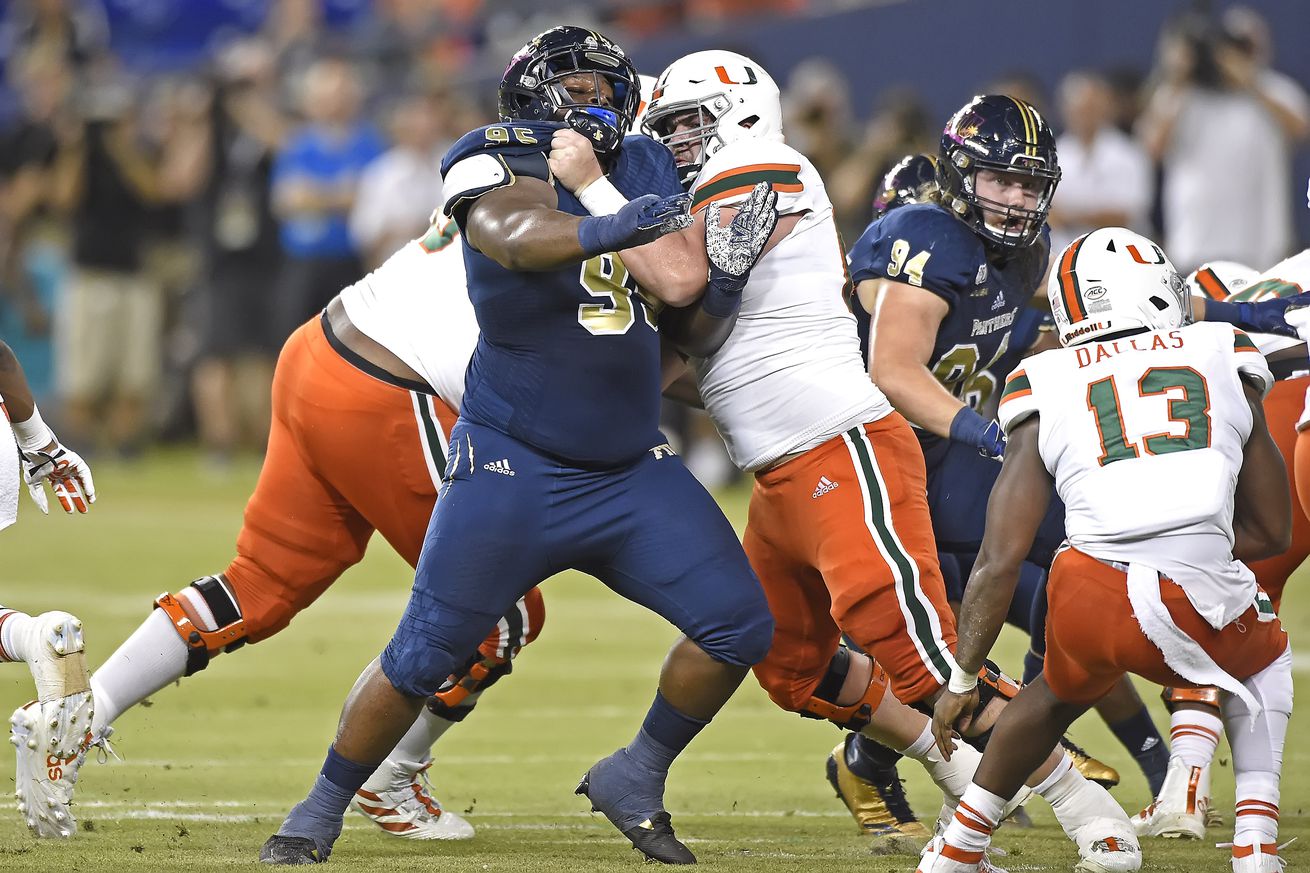 The Canes must play better in the trenches if they want to get back on the winning track.

The Canes failed their 1st big test of the season as they were run out of Clemson 42-17. Miami is now trying to do something that previous Canes teams have failed to do, and that is compartmentalize one loss and move forward with the season. Miami has had a bad habit of allowing one loss to turn into multiple losses, and if they want to play in the ACC Championship Game, they cannot allow this to happen. Pittsburgh is a team that Miami is more talented than, and Miami has beaten the last 2 seasons. Miami gets this game at home but needs to regain the swagger and confidence they had before the Clemson game.

Clemson gave teams a blueprint on how to slow down Miami’s new up-tempo fast break offense. Load the box, take away the run, and maul the Canes receivers. You can imagine that every other team on the schedule will try this strategy, though I warn all of them, their talent is nowhere close to Clemson’s.

One of the many places the Canes struggled on Saturday night was on the offensive line. Miami struggled to figure out where pressure was coming from, and did a horrible job getting any movement in the running game. Miami’s RBs only accounted for 11 yards on 10 carries, and there was little to no room for anyone to run. Miami’s guard play in particular was lackluster at best so they will need to clean up the physical beating they took at Clemson. D’Eriq King was also sacked four times in the game, and if it wasn’t for his legs the Canes may not have gotten a 1st down.

Miami got adequate play out of the tackle spots with Zion Nelson and Jarrid Williams registering the highest grades according to PFF.

Pitt is already an aggressive defense who will load the box and attempt to make teams win through the air with tight man to man coverage. The Panthers are led up front by a couple of guys who can get after the quarterback. Patrick Jones II already has 20 total tackles and 7 sacks on the season. He is a 6’5” 260lbs senior who must be accounted for on every snap. Rashad Weaver, his running mate, goes 6’5” 270lbs and hails from Ft. Lauderdale, FL and has 4.5 sacks so far in 2020. On obvious passing downs Miami must account for both of these guys to give King plenty of time to operate. The Panthers have 25 sacks as a team, and after watching Brent Venables attack the Canes O-Line, look for Pitt to be salivating at the prospect of doing the same.

Line Must Step Up

John Campbell Jr. was banged up against Clemson but was walking pretty freely late in the game. He or Zion Nelson will man the LT spot, with Jarrid Williams on the right side. DJ Scaife Jr. and Jakai Clark are the likely starters at guard with Corey Gaynor at center. Miami must get push from these guys to give the offense a two way go. Rhett Lashlee who admittedly did not call a good game against the Tigers must get back in his bag to help out scheme the weaknesses Miami has on the O-Line.

The Panthers are 3rd overall in total defense, and second with just 57.5 yards allowed on the ground. If there is one place they are somewhat vulnerable it is through the air where they are 14th in the country. This game will be a simple war of will. Can Miami play well enough on the line to thwart a monster effort out of Pittsburgh’s defensive line? If they can Miami will win, but if not it could make for a long day at Hard Rock Stadium on Saturday afternoon.