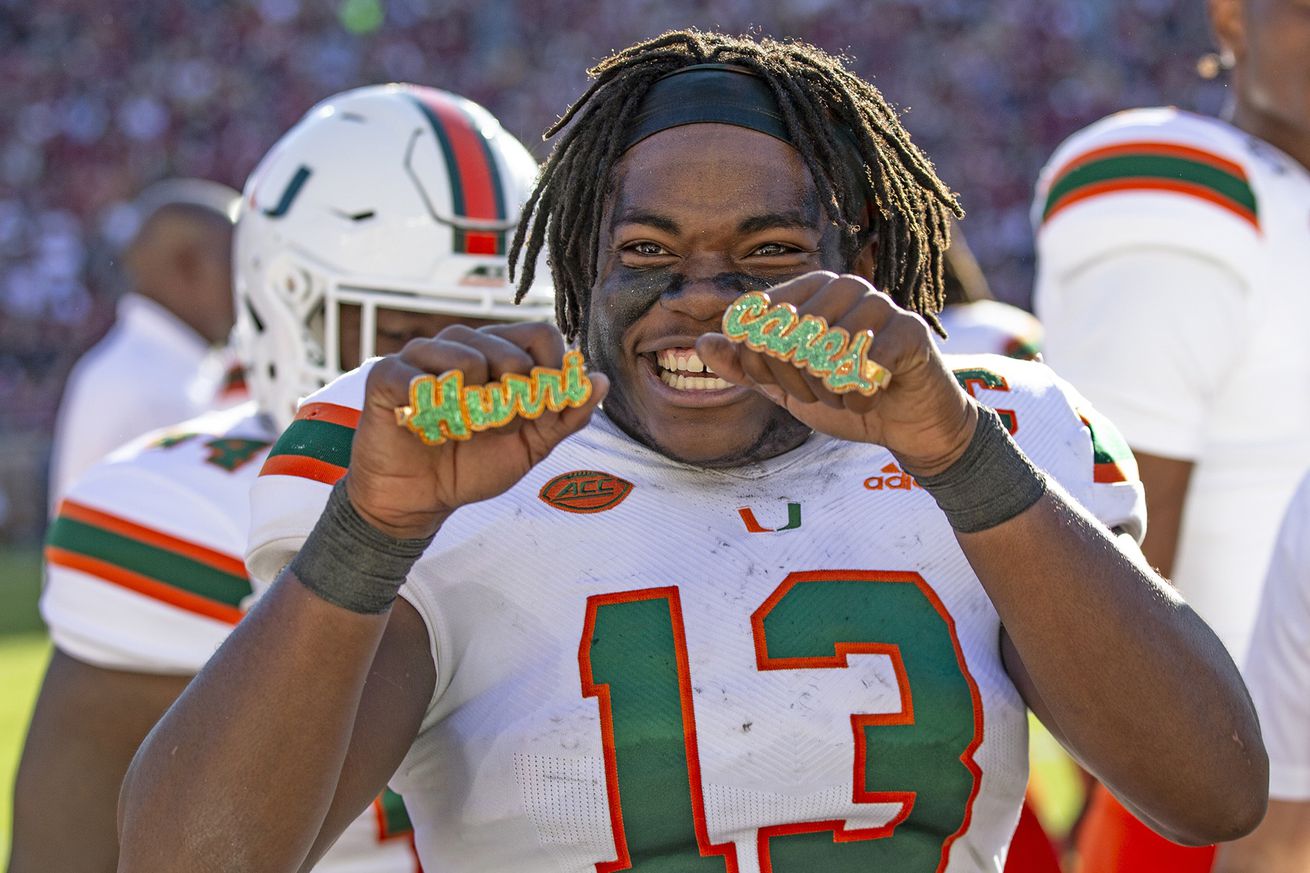 Yes, I realize this is a clickbaity title, it’s supposed to be funny. But Miami really is going to win their 4th in a row against the ‘Noles.

Miami is going to rack up their fourth win in a row against Florida State on September 26th, at 7:30pm in the primetime ABC slot. This will be Miami’s third straight game in primetime, second straight on national TV, and would be The U’s third win in the row in 2020.

Florida State is reeling, coming off of a loss to Georgia Tech, who subsequently went and got blown out by UCF at home. When the Seminoles roll off their team bus and step foot into Hard Rock Stadium it won’t be a rockin’ packed house like in games past. Due to COVID restrictions the Rock will not be sold out-sold out. However, the result will be the same- Miami is going to knock off FSU and I think with ease.

The Hurricanes are 2-0, having out ran a good UAB defense and a really good Louisville offense in Weeks 1 and 2 of the ACC season. The offense isn’t even clicking at 100% capacity yet but Rhett Lashlee and D’Eriq King are proving that a competent OC and quarterback can put up huge points in the spread in the 305.

The Seminoles have fallen apart since Jameis Winston and Jimbo Fisher won the 2013 BCS National Championship with a 14-0 season. That year, the ‘Noles beat Auburn in the final minutes of the title game with some Winston magic. By 2014, some dents that would define future issues in Tallahassee were already showing.

Fisher finished his time at FSU wit an 83-23 overall record, including a national title, a Heisman Trophy winning QB, and a trip to the College Football Playoff. But in the playoff, Winston freelanced and looked lost against Oregon. The ‘Noles suffered an embarrassing 59-20 beat down in the Rose Bowl, and haven’t been the same since.

What about those dents? They were cultural: investigations, arrests, the Seminoles were out of control and living life on the police blotter. It happened to Dennis Erickson at the end of his era in Coral Gables, Urban Meyer at Florida, and then Fisher at FSU. The Seminoles ran off seven consecutive wins against Miami from 2010 through 2016, but the end of the Mark Richt era and the beginning of the Manny Diaz era have seen The U take the advantage since 2017.

It’s a culture thing. Under Jimbo Fisher the Florida State Seminoles began to recruit the most talented but not the best players to fit the program. When a program begins to recruit off of lists and not their knowledge base, that’s what often happens. To keep boosters and administrators happy, coaches often feel the need to win the 247 Sports recruiting battles rather than opt for a lower ranking but get the best fits in the locker room.

Winston and Deondre Francois were perfect examples. Controversy seemingly followed FSU’s two starting quarterbacks everywhere. Eventually Francois was injured, a very young James Blackman took over, and the ‘Noles struggled. Jimbo stopped recruiting, the off-the-field issues were worse than ever, and FSU fell to a 5-6 under Jimbo and 7-6 overall. Fisher went to Texas A&M for a big contract and a fresh start. Tallahassee was left with the bag.

The ‘Noles brought in Willie Taggart. It seemed like a perfect fit. Taggart was coming off an average season with the Oregon Ducks after a career year at USF. Taggart is a Florida native, huge FSU fan, and a hot name. But he didn’t have the discipline needed to turn the runaway ship around. Taggart didn’t even make it through two seasons at FSU before being fired for a myriad of rumored reasons from more discipline issues, to an unorganized program. His overall record in Tallahassee? 9-12 including 6-9 in the ACC.

The FSU program has a culture issue from the top down. The athletic office, the president, etc… they don’t know how to build a sustainable winning program. After chasing potential new head coaches for months, the ‘Noles landed on Memphis coach Mike Norvell to be the man. But Norvell, who seemed like the brightest star at Memphis (38-15 as head coach of the Tigers), almost immediately had issues at FSU.

Norvell has inherited a weak culture, and that’s hard to erase in only one season. The Seminoles have a bad offensive line, had missed on quarterback prospects for years, and there isn’t a ton of grit in the program right now. Norvell got himself in hot water by lying about his contact with players, which is defensive star Marvin Wilson was forced to point out.

Norvell has also had culture issues with players accusing the staff of not taking care of them during COVID, which came across as a false report, but still- the culture is weak at FSU. Norvell then walked into Week 1 and lost, at home, to rebuilding Georgia Tech. After the game multiple players hit the transfer portal. Norvell then tested positive for Coronavirus and will have to sit out the annual rivalry game against Miami.

After the loss to the Yellow Jackets, Urban Meyer came out with harsh criticisms of the Seminoles program culture. Meyer said Mike Norvell is, “…In quicksand right now.” Meyer also said FSU needs to, “Pop the hood and look underneath.” On the Focus 3 podcast with leadership guru Tim Kight, Meyer is often critical of his own program culture or lack there of while the head coach of Florida and Ohio State.

There is no easy solution to a program-wide culture breakdown. However, the key to fixing that culture issue is to actually attempt to fix the culture issue. The FSU admin is cash strapped, Norvell didn’t start off right, and now at 0-1 FSU could be rolling into Hard Rock to get blown out by a surging ‘Canes team.

Oh and speaking of Miami’s culture. Manny Diaz cleaned house on the offensive staff, which seems to have helped a smidge. Bringing in a leader like Coach Lashlee, but also D’Eriq King at QB has changed the way the offense looks and feels on the field. King is a professional with the media, and once football is over would be a fantastic football coach from hearing him speak to the media.

Diaz also was more careful in the transfer portal. Instead of players who were booted off of their last team, or their former coaches were happy to see them go, Quincy Roche was a player that Geoff Collins wanted in Atlanta. With other players opting out in 2020, Miami has a group on offense that looks committed and a group on defense that is rocky at times but look to be trying.

Culture is king. It’s what drives a program. It’s more important than scheme. If you’re going to weigh the importance of parts of a program:

Culture– The purpose, mission, vision and Core Values of your program.

Acquisition– Recruiting the best, not the most talented.

Florida State is reeling in the culture department. Miami hasn’t been good, but they look to be building it. Less portal turds, cancers leaving before poisoning the well for too long in 2020, and less focus on dancing and more on playing ball. Some of the loafing on defense, lack of focus resulting in drops, and issues at punt return need to be cleaned up.

Miami is going to beat FSU by 14+ because The U’s culture is in better shape than FSU’s.