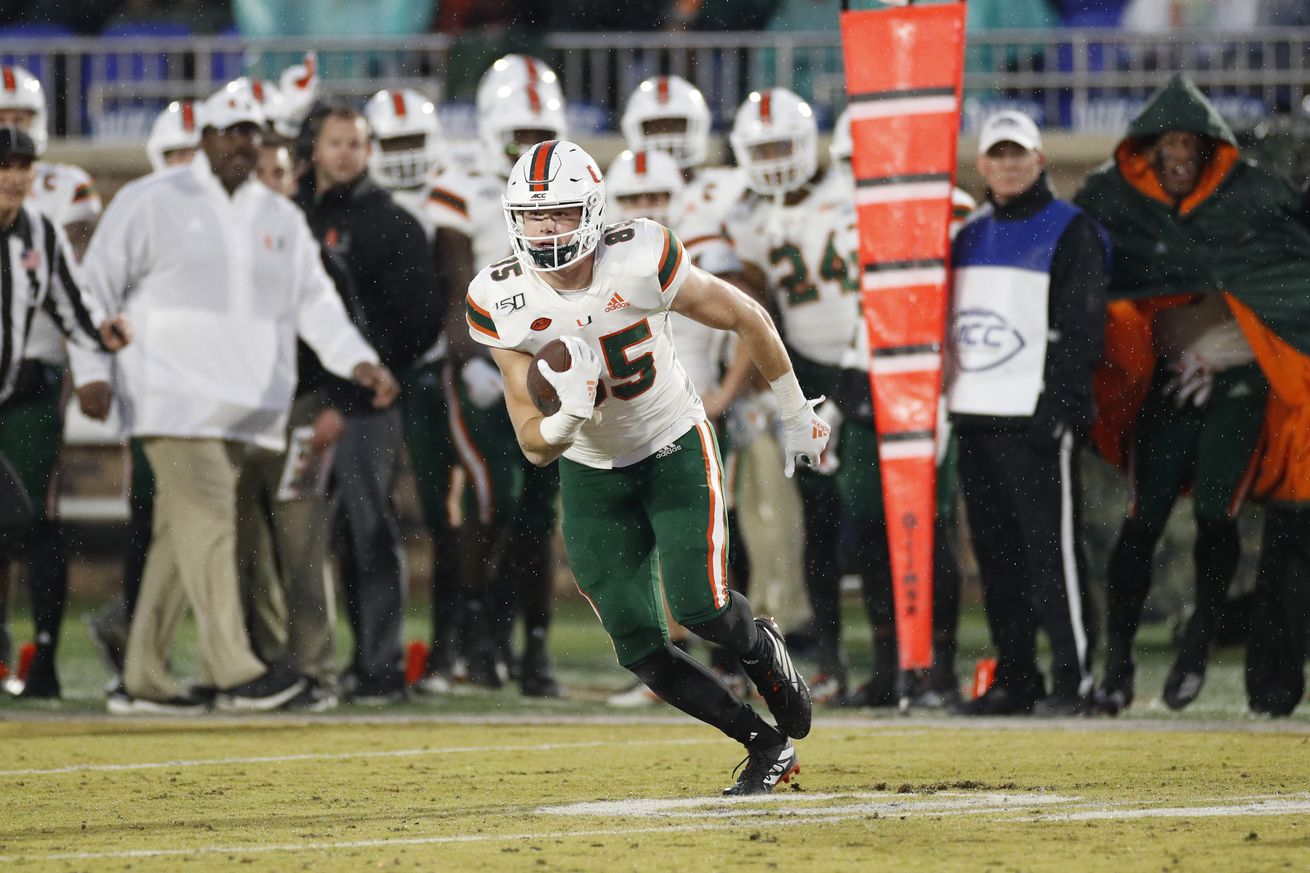 Despite the possibility of not seeing the ACC Championship stage yet again in 2020, the Hurricanes can still contend for their first New Year’s Six bowl victory after losing to Wisconsin in 2017.

The Miami Hurricanes football program and its fanbase were on the edge of their seats late Saturday night, as the Notre Dame Fighting Irish outlasted the five-time reigning Atlantic Coast Conference champion Clemson Tigers in overtime, 47-40.

The rest of the college football nation was watching, too. Like Miami, they were waiting to see if there would be a new No. 1 in the ACC, unsure as to whether Clemson coach Dabo Swinney and his crew would be able to march out of South Bend, Ind., still undefeated.

“I told them [Miami players] last night that we called the ACC and I asked them what the tiebreaker was and they said ‘Go 1-0 this week,’” Miami head coach Manny Diaz said jokingly, knowing that all the team could control were the remaining games on the schedule.

The No. 1 versus No. 4 matchup was the most watched college football game of 2020, let alone the arguable game of the year, regardless of the winner. Clemson topped Notre Dame in passing yards 439-310, while the Irish blazed past the Tigers in rushing yards, 208-34. Both schools matched each other in first downs at 22 apiece, however.

To say that Trevor Lawrence, Clemson’s star quarterback and Heisman Trophy candidate, was sidelined after testing positive for COVID-19 would be almost impossible to fathom. Clemson backup quarterback D.J. Uiagalelei tallied 439 yards and two touchdowns despite the loss.

With Miami’s only defeat to Lawrence and the Tigers on Oct. 10, the program still remains in the ACC Championship hunt even after Notre Dame’s win, as the conference’s biggest game remains just 36 days away. Notre Dame (6-0 ACC) and Clemson (6-1 ACC) currently sit atop of the ACC standings with the Hurricanes in third place (5-1 ACC) as the 11-game regular season continues.

Though Clemson has the advantage of the head-to-head tiebreaker over Miami, winning the final four scheduled games and a Tigers loss or two Notre Dame losses before Dec. 12 would be Miami’s remaining path to Bank of America Stadium in Charlotte, N.C.

Facing either Clemson or Notre Dame’s game plan would likely give the Canes a challenge after almost dropping a game to an unranked N.C. State team last Friday. The team’s 44-41 win over the Wolfpack not only kept their hopes alive for a chance at an ACC title, but a New Year’s Six berth as well.

Multiple college football analysts and news sources have still projected Miami to either compete in the 2021 Orange Bowl or Peach Bowl, with the Tigers and Irish possibly both advancing to the College Football Playoff should Clemson be victorious in the rematch. Potential Miami opponents of the SEC and AAC include Florida, Texas A&M, Cincinnati, and BYU, who remains independent unlike Notre Dame this year.

Should Miami’s odds not be favored for the ACC Championship Game, the program could possibly still reflect on winning every game they were able to hone in on with a potential, monumental leap from an Independence Bowl loss to Louisiana Tech on Dec. 26.

But Manny Diaz is well aware of how important going 1-0 against a Virginia Tech team that beat Miami 42-35 last season remains.

“Nothing matters,” Diaz said after the team’s practice on Wednesday. “If we’re sitting around talking about what December looks like, we will get beat in November. Our guys have done a pretty good job of that.”

Senior wide receiver Mike Harley chimed in saying that “Everyone remembers November. This is the back end of football, so it’s taking advantage of every opportunity.”

Given their short-term goal, the No. 9 Canes and Hokies will kick off from Lane Stadium in Blacksburg, Va., tomorrow at 12:00 p.m., as Virginia Tech ranks fourth in the conference offensively at 37.3 points per game.