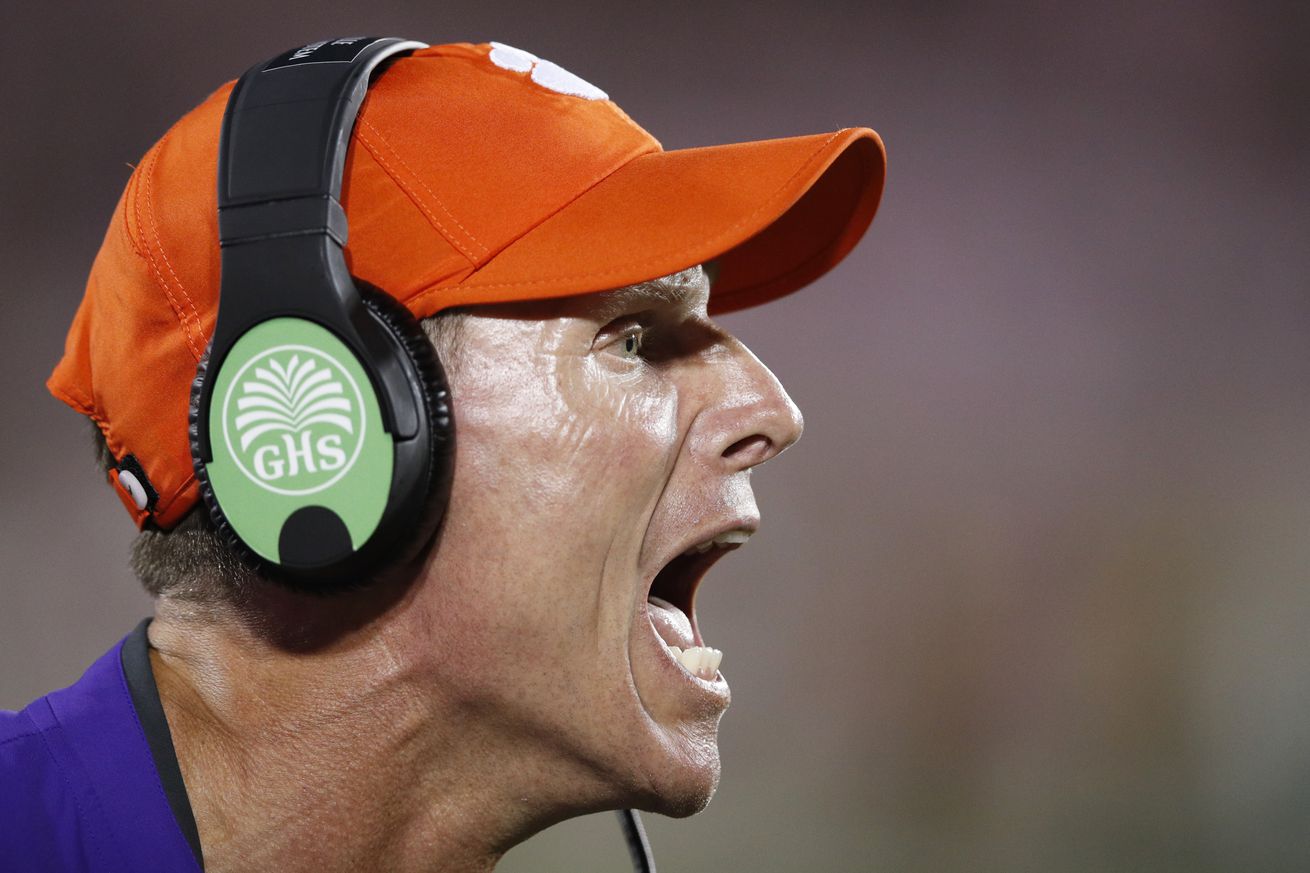 In 2012, Swinney met Venny. Brent Venables that is.

In his first five seasons as the defensive coordinator in Death Valley 2.0 (LSU owns the OG tag on Death Valley because 25-42) Venables gave up at lease 30 points in TWENTY games.

Since then? Venables has caught fire, with only three such games, including the 42-25 loss to Joe Burrows and the LSU Tigers in the College Football National Championship Game.

The Clemson Tigers Defensive Coordinator is the premier game caller at such post in college football. His defense will be Miami’s biggest hurdle in an its bid to upset the number one team in the land.

Its like that at the very moment you are reading this article, Coach Rhett Lashlee is breaking down film or practicing plays that will take advantage of whatever weakness there is to be had in the Clemson defense. Over the last 4 years, even with the dominance Venables has shown, there have been chinks in the armor. What can Lashlee and Co. glean from these moments of weakness?

You are probably asking yourself, “Hey didn’t L..” – let me stop you there. Yes Lamar Jackson played on that Louisville team. Yes, having a human cheat code at quarterback like him can be treated like an outlier. The correlation however, is that D’Eriq King poses a very real and similar threat to Clemson that Jackson did. While Jackson is the most versatile QB of the last 20 years, his threat to break contain at any moment as well as drop a dime confounded coordinators, including Venables. King can do similar.

Brent Venables loves to play man and allow his front to attack while using his linebackers to protect the middle of the field and play clean. Versus Jackson, they rushed more often than normal in order to help contain the pocket, stressing the edges and allowing better collapse opportunity up the middle.

Big differences for that Clemson team, they featured three-first rounders on the defensive line which allowed Venables to play chess with the back 7. Also Lamar Jackson was still coming into his accuracy so once shaken he could be liable to lose some throws when threatened.

Louisville became more creative in the running game to change Clemson’s focus and get more men in the box and allow the tight ends and running backs to get loose behind them. This allowed Jackson easy throws in the flats and across the middle to gash the rush of Clemson. Jackson had a big day on the ground as well, by design, to keep Clemson honest and not leaking away from the box. Lack of creativity in And Goal situation like cost Louisville the game.

Lashlee’s play calling in the run game and D’Eriq King’s running ability can take advantage of Clemson’s aggressiveness and allow Brevin Jordan, Will Mallory, Jaylan Knighton and Cam Harris to have major YAC opportunities in the short yardage pass game.

Seriously though, way back in 2016 Florida State had a pretty good game against a great Clemson defense, that was talented but still learning how to close out games.

Hmmmm, does that sound like Clemson THIS year? Youth Vs. Maturity. Go Read it.

Anyhoo, Florida State and what we now know as a Swiss cheese offensive line was pitted against a defensive line for Clemson that feature a young trio of Colin Farrell, Christian Wilkins and Dexter Lawrence. Have a day, Clemson D.

The Clemson defense was able to feast on DeAndre Francois early as Jimbo Fisher ran a number of tight formations to run their pace and allow Dalvin Cook to control things. However Clemson front four was able to easily handle FSU line and kept the Seminoles off the board for the most part in the first portion of the game. It was until Jimbo decided to go with 3 or more receivers on the field to spread the line of scrimmage were the Noles able to begin moving the ball down field. This allowed for a quicker passes to negate the rush and get players makers in space while saving Francois’ teeth.

Ultimately once FSU got going into the third, Clemson said the same thing Miami did for 3 straight years, “Mama, There Goes That Man Again”. Dalvin Cook happened, scoring on runs of 43 and 70 in the 3rd and one from 8 yards out in the fourth. Just prior to that he dropped what could have been nearly a 50 touchdown pass from wheel route Clemson failed to cover.

Two major components to note, spreading out Clemson is an excellent way to exploit the belly of their back seven and keep the trench bullies at bay.

Secondarily and equally as important:

Santana Moss definitely knew what he was saying when he coined that phrase, and Dalvin Cook proves it out here. This means we will need to lean heavily on D’Eriq King to have his first shining moment as a Cane, as well as Brevin Jordan and Cam Harris to take their games to the next level.

Woah Buddy! Finally a W for the good guys, This was as fun game to watch as any you can find. The Panthers were outmatched overall but made up for it with a trustworthy quarterback in Nathan Peterman, a bell cow runner in James Conner, and capturing moments when presented.

What does any of that mean?

For starters Peterman had the trust of his offensive coordinator, as Pitt was able to throw the book at the Clemson defense. Play action, tons of pre snap movement, attacking the flats and the middle of the defense, deeps shots, you name it. Pitt was able to do this because the quarterback was mature and trustworthy, something Miami is only now enjoy after some time.

Conner was the balancer to Pitts passer, fighting for every yard and punishing on every run. Conner would have a day, post 132 yards rushing and 2 touchdowns from scrimmage.

The play calling was at its best, taking what the defense gave it while taking its shots to challenge the defense.

The biggest thing was that Pitt came to take the game, They didn’t come to Death Valley 2.0 to steal a game, they came to take it. Pitt’s defense gave them multiple opportunities off of turnovers, and the offense rewarded them by scoring 17 points off of those turnovers. Pitts biggest game in years was a testament to heart and desire.

A young defense will give Miami its shares of chances to make splash plays. Unlike the miscommunication we have seen at times over three games and errant pass like the missed touchdown to Jeremiah Payton vs UAB, Miami MUST seize the day and treat every opportunity like gold. Reward big plays by the defense will only encourage more.

Also, a developing theme. Balanced offenses get the most out of Clemson.

Coming into this game the country was very divided. Clemson had the experience and the pedigree and the recent success.

Rewatching this game, I forgot how quickly things started rolling for LSU when it did. After a fast start for Clemson, LSU had a nice touchdown against one on one coverage but struggle somewhat until Burrow got past what can only be seen as a case of the butterflies. During 21 unanswered points Burrows started getting the ball out faster, but also was dropping DIMES. One thing lost is the continued success the running backs, in this case Clyde Edwars-Helaire. The lack of coverage on backs is astounding in these games, as is the ability for teams to stretch the defense left and right.

What could we possibly do that LSU did? Well, for starters, attack their weaknesses with your strengths. Going into this game LSU knew well that Venables wants to play man coverage. LSU knew they had NFL receivers and took advantage heavily. Miami can say the same thing, at tight end. Clemson is noticeably weak at linebacker and inexperienced at safety, which is the money zone to get Jordan and Mallory to have a field day. Lashlee will have to be in his bag getting these guys open and ready to chew up yardage after the catch.

Speaking of Lashlee, another thing to learn is once you have your rhythm with a giant, you can’t let up. Keep swinging until they’re out, then kick them a few times for good measure.

This will be a hard game (how about that obvious gem, huh)?. Seriously though, Miami needs to be ready to execute.

That was the biggest takeaway watching the wins by Pittsburgh and LSU, there is a razor thin margin for error. Utilize D’Eriq King and his maturity to open the play book and get the athletes in space vs Clemson. We have to take advantage in this matchup to confuse this defense. Usually that is Venables desire against the offense, but with the group still getting live experience, the Canes have to win the war of execution.

If Miami can get Clemson into a shoot out, that benefits the offense to attack the soft spots of the Venables defense while allowing ours to pin its ears back in more obvious passing downs versus an unbalance offensive line.