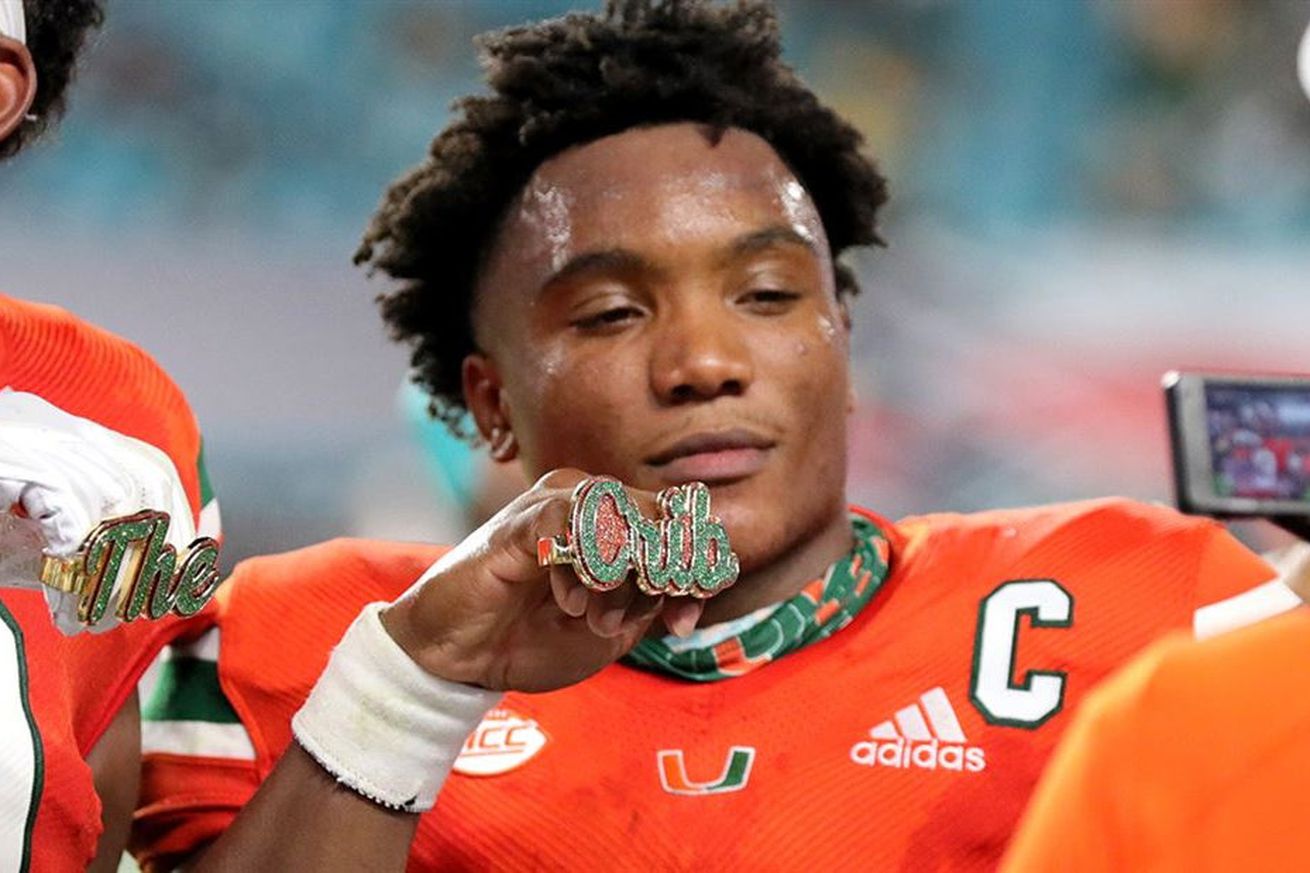 As it should be.

The Miami Hurricanes have a reclaimed the ability to play and play at a high level on both sides of the ball. Resident College Football Powerhouse Clemson is chomping at the bit for its first real test of the season. The stakes are high as we have our first separation Saturday of the young ACC football schedule.

In what will be the 12th matchup in between the two programs, the 7th Ranked Miami Hurricanes look to RE-Present themselves to the college football landscape as a College Playoff Contender. The Resident ACC Champion and 2019 Runner Clemson Tigers look to keep the status quo and their number one ranking on the season.

Normally in a game preview, we want to present the facts, numbers and things to watch in the upcoming matchup.

However, with the far reaching amount of previews this week around the sports world, with THE ABSOLUTE BEST coming from the Mecca, stateoftheu.com – I want to deviate a bit from the script.

Before we continue, a recap:

What This Means to Miami

What This Means to Clemson

Justin on Clemson Wanting to Stay With its Culture

What to Expect When Miami and Clemson have the Ball, Respectively

Justin Breaks Down the Film on Miami and Clemson

What To Watch For

John Tells Us What to Watch For

Cam Goes in with Shakin’ the Southland

My Look at What It Takes to Beat Brent Venables Defense

The Game Experience For Both Squads Will Play a Role

The Biggest Players in the Game

What the Sports World is Saying

Ro and the OBB crew talk with Chris Fowler

I hope you read all that casue there will be a test at the end. Just kidding.

In all seriousness, earlier this week a tweet caught my attention that we all hope is true behind clothes doors for the Canes football team and truly, for the program.

We need a throwback pregame speech from Ed Reed this Saturday. #BeatClemson

If you need a brief reminder of what that is and what that means:

Once again take it in. This is not new territory for Miami. This is what Miami is. This what the Miami Hurricanes have done. The game that presents itself tomorrow is one that has littered the storied history of Miai for the most dynamic run of any college football programs history.

Every Wide Right AND a Wide Left

Where We Have Been

This is in Miami’s DNA. What is tomorrow?It’s a realignment. For about 19 years the Hurricanes have teased us and tempted us, giving us heart attacks, breaking our hearts and leaving us for dead. It’s time to get back to what Miami Football is.

Games versus UAB and Louisville were the warm up and the dry run, proving that we could handled business like a Hurricanes team should. Recent history put those games in doubt for us. Louisville was supposed to be our trip up game. Everyone that was projecting an 8-4 or 9-3 as PEAK records nearly UNIVERSALLY had Louisville as a game we lose. The receipts are out there. As they say, “It Be Your Own Tweets” (Yes, that phrasing is how it should be grammar police.

FSU was supposed to be a challenge. It was the super bowl right? It was the game that was supposed to see us make the mistakes that could jeopardize a season. The Hurricanes, and not the Candy Canes, not the Cardiac Canes or the Same Ole’ Canes, the HURRICANES -WIPED. FLORIDA. STATE. OFF. THE. DAMN. MAP. As it should be.

For the purists that disagree, when Miami has been ALL THE WAY turned up, that game has been ours like clockwork.

What’s In Front Of Us

Here we are however, doubting. Second guessing. Waiting for the fall. Expecting the crumble. Settling for less. Like we have been conditioned to.

For a fair reason, I will definitely give you that. Clemson has overtaken Alabama as the top squad in College Football since 2015. They have taken down Bame TWICE in the title game, and lost two others. They have now two back to back transcendent talents at quarterback in Deshaun Watson and Trevor Lawrence. They have won 5 ACC championships in row and own blowout wins over just about every ACC team in that time frame.

On offense, to couple with Lawrence they have a first round talent in Travis Etienne who has the full package at running back and will be a thorn in Miami’s side, if we let him.

That means that Miami needs to handle business at the line of scrimmage and beat the snot out of the men across from them. As much as we want to crown Clemson we can’t overlook there deficiencies. The offensive line is NOT GOOD during the young season. Louisville’s line was better and were able to create holes against our defense. This line has struggle to do just that against the like of Wake Forest and Virginia, two teams in rebuilding mode. Nearly half of Etienne’s yards have come AFTER contact.

Contrary to popular belief, Clemson’s starters aren’t getting as early a rest in conference play as some might suggest, as the starters were playing into the 4th quarter of each one of their ACC slates.

As a defense, Miami should be licking its lips. STOP. I am NOT SAYING Clemson is trash. If the team thinks that they’ll get worked. What I AM SAYING is that this offense is vulnerable. This defense with Jaelan Phillips, Quincy Roche, Nesta Silvera, Jarid Harrrison-Hunte with Bubba Bolden and Al Blades will have opportunities at a much higher clip than we are giving them credit. The ends have a chance to eat, and the disruption will create chances for turnovers and more.

Its time to come back to reality. This isn’t your nightmare Canes offense anymore. Rhett Lashlee is a traditional Canes coach. Why? Because he wants blood every drive. He want’s to drive the ball through the heart of any and every defense and dare you to stop us. This offense is much more demanding of itselfs than anything we have seen since Ken Dorsey, Willis McGahee and Andre Johnson were here.

Big plays are becoming the norm. They can and WILL happen versus Clemson. The best Canes running back room since we had Hall of Famers stacked in there is primed to exploit linebackers that can’t touch them in the open field. Those backs are confident and wanting to deliver blow after blow against a talented but green defensive line. Remember, at this level, stars don’t matter. The board resets and the games have to be played. With D’Eriq King under center, the respect his presence garners doesn’t allow teams to pack the box, or else risk what we saw vs Lousville in the 3rd quarter with consecutive back breaking big play touchdowns.

Muff punts? Next. Too many miscommunications? Next. This room is deeper than it was last year and the year before so the cream will rise to the top and the best guys will be on the field to give us the best chance to win. Mark Pope should be playing with a ‘prove it’ edge. This is his chance. Mike Harley needs to step and show us how much he has really clicked with King. The thing is, there will be an X Factor, no pun intended to Xavier Restrepo. Big players will rise to make big plays in this big game. There will be too much opportunity not too.

Venables wants it too much. He wants to force our receivers to prove it with man coverage so he can chase D’Eriq in the back field. He wants to get to King because he has a healthy fear of the running quarterbacks versus his slow linebackers and secondary that hasn’t made tackling its priority. Brevin Jordan and Will Mallory will be doing everything to keep this defense honest. If they sell out on the rush, there isn’t a linebacker on this team that can stay with either tight end all game, that’s no hyperbole. That’s fact.

The Look and Feel is Reminiscent Too…

The 1983 Orange Bowl Versus Nebraska.

The similarities are striking between that Nebraska team and the Tigers. A historic figure in coach in Tom Osbourne. Dabo Swinney is on his way to that if not there already. Big time playmakers at Quarterback and Running Back with a heisman between them in Turner Gill and Mike Rozier. Lawrence and Etienne might be the best combo at the position in the last decade of college football. Nebraska was the darling of college football, just how the media is gushing over the Tigers.

The Similarities for Miami are eerily similar in the state of the program.

Howard Schnellenberger about the State of the Miami Program from 1983:

“They were in a state of depression because they had 13 years of mediocrity, if not bad football,” the baritone-voiced Schnellenberger described the state of the Miami program when he took over. “They thought the stadium was too big. They thought the schedule was too tough.

“They didn’t think they could get young players to come to their school from South Florida and all that proved to be wrong.”

Nearly 19 years ago to the day, Ed Reed gave one of THE most goosebump enducing speeches in sports history which we referenced above. This team and this year are the Ed Reed and the past 19 years of Canes Football is the rest of us. They know that we’ve been expected to dominate like we said we would be we just haven’t been doing it.

Well, this team is about to answer the call. In a game that starts well matched only to creep into a Miami favor after key stops and big games from Bubba Bolden, Jaelan Phillips and D’Eriq King, the Hurricanes stank there ticket as the real deal in 2020.

Before you pause to curse me or call Homer, keep in the back of your head what was said about the team in 1983:

Schnellenberger When Asked if the Canes could beat Nebraska in 1983

Nebraska? “We’ll assault ‘em on defense.” said Schnellenberger. “Try to gang [Mike] Rozier whenever he has the ball.” Offensively, “we’ll make them play the entire field. Stretch out their defense and see how much they can cover.” In either case, he said, “we’ll take chances. It will not be a close game.”

Well, then, can Miami win?

Thats a great game plan if I ever heard one coach.