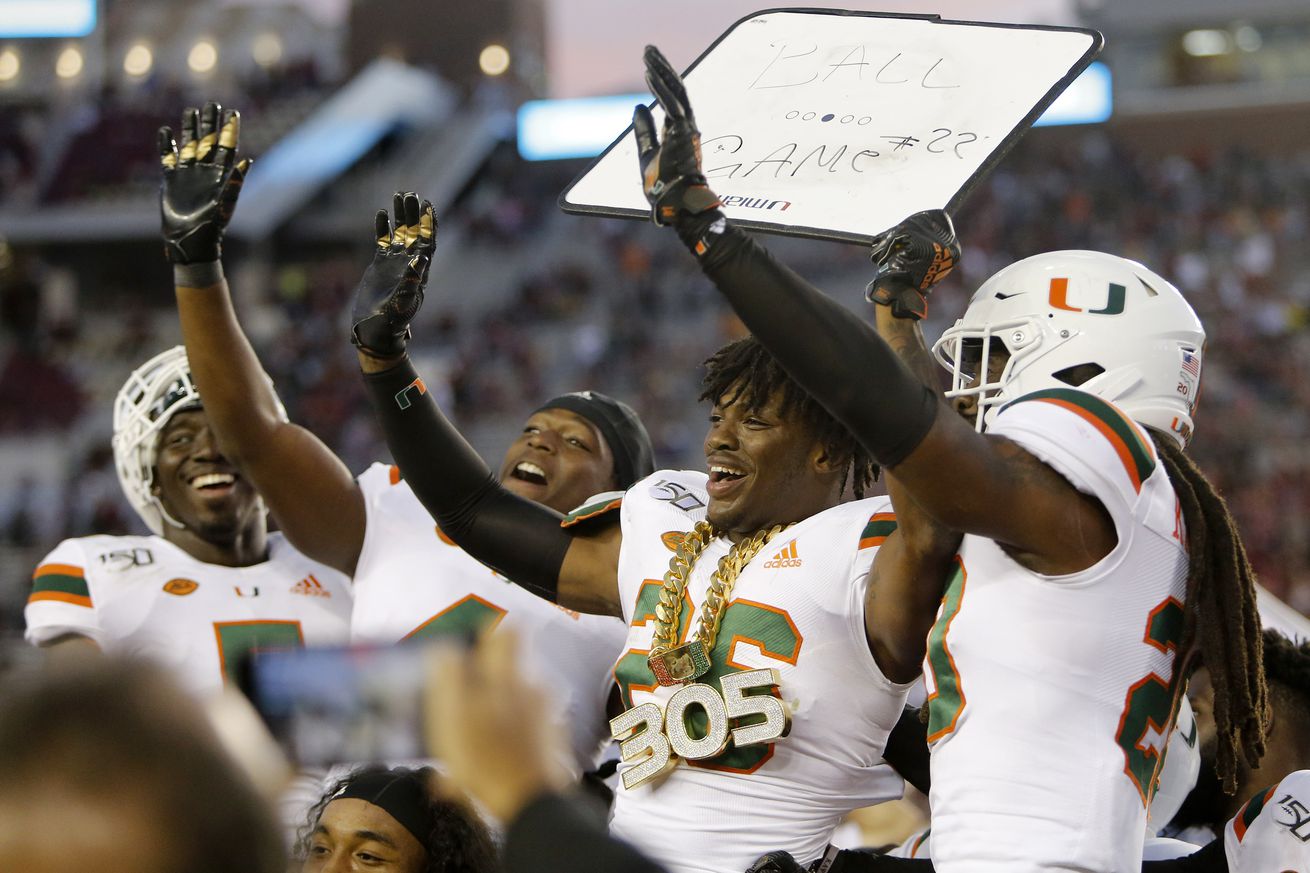 If Miami wants to win more games, the Turnover Chain needs to come out more in 2020

If there has been one thing that has given the Miami Hurricanes national attention the last 3 years, it’s their famous Turnover Chain. During 2017, the season when Miami introduced the Chain, the Canes defense was third in the country in forcing turnovers, 31 in total. Then again in 2018, Miami’s remained one of the best in forcing turnovers with 25.

The turnover chain is here to stay. pic.twitter.com/bP8dEX5BFP

In 2019 however, the Chain was seen less often, as Miami finished the season with 20 forced turnovers. They ranked 25th in fumbles recovered per game, but also 58th when it came to interceptions per game.

No sacks. No turnovers forced by this #Canes defense tonight.

The excitement that used to come when Miami’s defense forced a turnover, it wasn’t there in 2019, like it had been the two previous seasons. In years past, the Turnover Chain gave the entire team a boost of energy, and if Miami was at home, the Chain coming out would send Hard Rock Stadium into a frenzy.

In 2017 for instance, the turnovers the Hurricanes defense forced helped them against teams like Virginia Tech and Notre Dame.

Not only less enthusiasm on the sidelines, the lack of turnovers in 2019 cost Miami wins too. Against the Hokies last year, the defense came away with no turnovers, and lost 42-35.

Miami caused ZERO turnovers today.. that is not Miami defense!

Same case in the game against North Carolina as well, the inability to force turnovers, especially in the second half, was a factor in Miami losing. In 2018 against the Tar Heels, Miami’s defense came away with 6 turnovers on that night alone, scoring 3 defensive touchdowns.

Two takeaways tonight that carried over from last season.

1. Miami has offensive talent. But Malik Rosier misses too many open guys. He makes some plays but leaves far too many out there.

Last season, there were 3 games where Miami recorded 0 turnovers, and they went 0-3. In the final 3 games of 2019, the Hurricanes defense had only 2 turnovers in total, as UM lost all those games as well. On the other hand, during the Canes 3-game win streak against Pitt, FSU and Louisville, they forced a combined 8 turnovers.

Congratulations to Gurvan Hall getting his first career interception! Many more on the way from this bright young star pic.twitter.com/8K5FrdDbwd

Now, some of the reasoning behind the lack of creating turnovers in 2019, has to be put on the youth of the secondary last season. In 2018 and 2017, Miami had veterans like Jaquan Johnson, Michael Jackson and Sheldrick Redwine as defensive backs. Last year, with those three gone, the Canes had to rely on Trajan Bandy, and first-time starters like Gurvan Hall Jr. and Al Blades Jr. It also didn’t help that Bubba Bolden was limited to just 5 games.

Miami SAF Bubba Bolden (@BubbBolden) is one of the best safeties in the nation. Fantastic coverage ability and really good instincts. Great at diagnosing the opponents play and is someone who has the potential to be a ballhawk in the backend of a defense. #NFLDraft #DraftTwitter pic.twitter.com/uAjfdsWhga

In 2020, if the Hurricanes want to see more wins, the defense will have to force more turnovers. With Bolden now healthy, I expect him to be a ballhawk at safety, but Hall and Blades, as well as Amari Carter and DJ Ivey, will need to step it up and force their opponents into turning the ball over. All four of these defensive backs have starting experience, so you have to think they’ll be more comfortable, and thus more developed in 2020.

Hard pressed to find a more improved corner in the second half of the season than DJ Ivey. QB takes the bait and he makes him pay. 3rd INT in the last 3 games for the sophomore pic.twitter.com/OvimoJKKT7

Something that the secondary will count on is the pass rushing of Miami’s front-four, especially defensive ends Jaelan Phillips and Quincy Roche. A big reason why the Hurricanes forced so many turnovers in 2017 and 2018, they were always at or near the top in the country when it came to sacks per game. Not only was the opposing quarterback forced to make ill-advised throws under pressure, but you also had players like Jonathan Garvin and Shaquille Quarterman knocking the ball loose.

Week 5 @ACCFootball Players of the Week:

Another reason why Miami’s turnover number decreased in 2019, in my opinion, was the play-calling by defensive coordinator Blake Baker. In his first year as DC for UM, It seemed like there were far too many moments where Baker didn’t rush enough, or blitzed too many, and it didn’t fit the personnel of the Miami defense. If the defense is struggling early and not coming up with turnovers, we may see Manny Diaz back calling plays on that side of the ball.

Blake Baker said the most disappointing thing defensively Saturday was Miami “not playing with passion and energy.” Said that led to no sacks, no turnovers.

So bottom line, the Turnover Chain must return to being a familiar sight on the sideline, if Miami wants to reach their full potential in 2020.