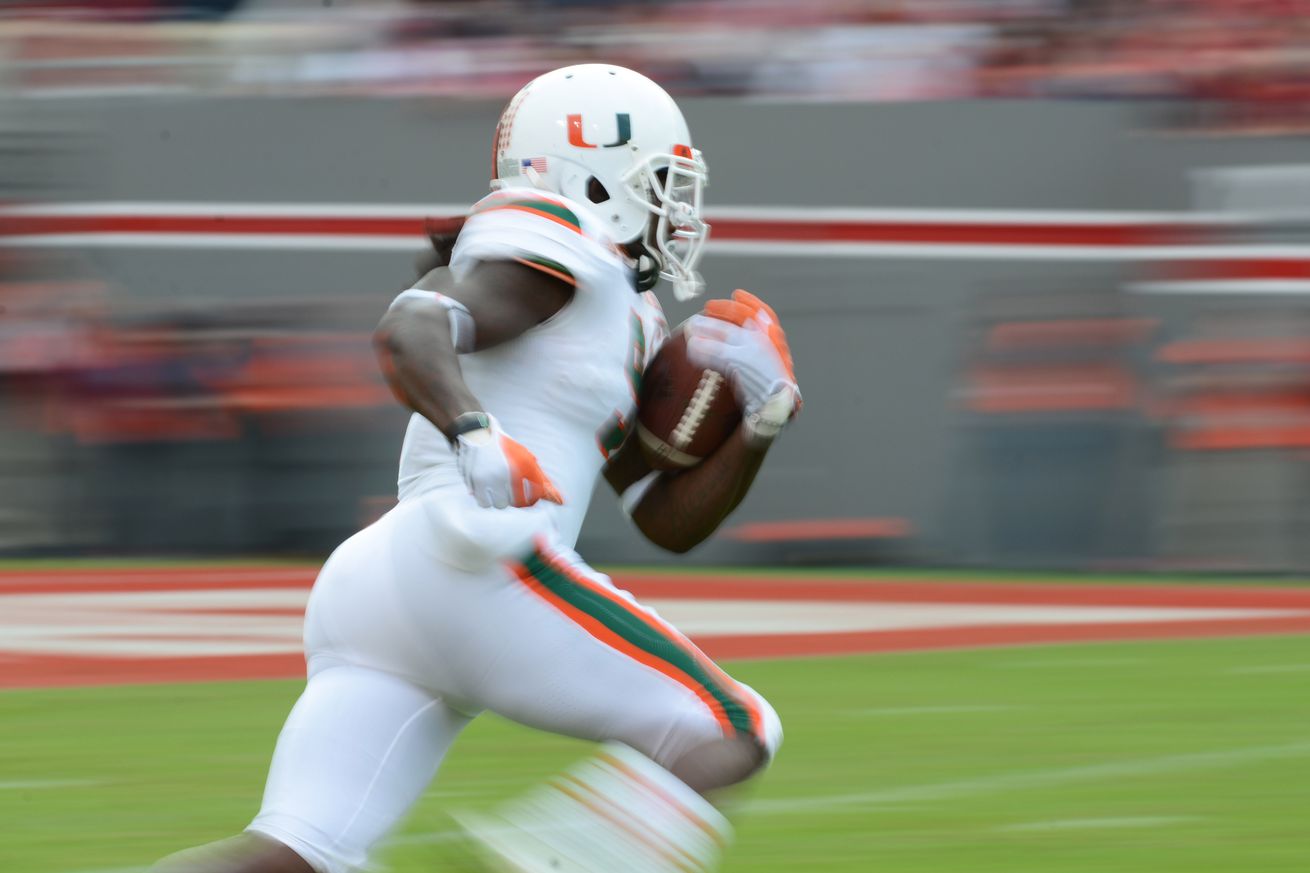 I had this article all but written. In fact, I had the tweet ready to send to Cam, advising him that it was going to be ugly this week. I was ready to unleash the throes of keyboard hell upon Blake Baker, the defensive staff, and the defense for an all-time sad-sack performance. After serving as the turf in a Sherman’s-march-to-the-sea reenactment, the Miami defense hit a new low in the first 2.5 quarters in Raleigh. Behind backup QB Bailey Hockman, the Pack drove 89 yards in 6 plays covering 2:16 for a 7-0 before folks even got settled into their recliners. They scored on 4 of their first 5 drives before starting at their 1 and running out of time on their sixth drive of the half. Their seventh drive was more of the same, with RB Zonovan Knight ending the drive with a 1-yard TD. After Miami labored down the field to tie it up, Miami’s vaunted special teams gave up a kickoff return for a TD to Knight, and it seemed Miami was destined to not be their night.

Miami’s front simply could not generate pressure, and in the back, they struggled to stay with their receivers in one-on-one matchups. I didn’t even know if I should’ve been more angry at Blake Baker or the players. I mean, if you can’t beat the guy across the ball from you, you can’t be as mad at the coaching staff as you could be – at least from a scheming perspective.

But, and this is what I want to focus my energy on this week……

1)………it was Miami’s offense that saved the day this time. In fact, it was a Heisman-esque performance from QB D’Eriq King. While watching him lob perfect deep balls to Miami’s WRs, who I will get to in a bit, I was reminded of another performance from a big Miami win – Jacory Harris’s performance at Florida State in 2009. I swear Jacory threw one of the prettiest deep balls that game – to Travis Benjamin and Graig Cooper – that I’d seen in a long time. Friday against the Pack, King’s accuracy was just as good for me. 31/41, 430 yards, 5 TDs, 105 yards rushing. Dropping dimes all over the field. That was the King that everyone had hoped for when he came to UM. That’s actually better than what folks had hoped for. Maybe it’s silly talk to say this, but if he can continue to perform even near this level, and if Miami can go 10-1, why shouldn’t he get an invite to the Downtown Athletic Club in New York?

2) It was a massive coming out day for Miami’s WR group. Although Harley had broken out, Mark Pope and Dee Wiggins got into the deep ball fun, with Pope putting up a line of 6/97/1 TD and Wiggins 7/77/1. Yeah, NC State’s defense is not good, but you have to take advantage of bad defenses, and boy, Miami certainly did. It looks like the pressure of competition Manny Diaz has reportedly instilled in practice is finally starting to pay off. Sad that it took something like that to get these performances, but hey, whatever works.

3) Harley’s game winner could not have been more electric under the circumstances. After having gotten robbed by the officials after UM had scored the previous drive, it felt like that might bite UM one of the more disappointing and painful losses in years. Instead, that catch-and-run TD from Harley could not have been more uplifting and vindicating from what we were watching in the fourth quarter: Miami was playing much better and deserved to win that game despite all that had gone wrong. King, Harley, and the defense made sure it happened.

4) The officials were HORRID. Like crew-suspended-after-the-2015-Duke-game-level bad. Whether it was the never-ending holding from their lineman (which is PART of but not the SOLE reason we struggled to get pressure – let’s make that clear) or the botched reviews (or the frequency of unnecessary reviews – my God, NOT EVERY MARGINALLY CLOSE AND/OR INCONSEQUENTIAL PLAY NEEDS TO BE REVIEWED!!!!), it was an abysmal performance that deserves to take place on a Division-III school’s intramural fields, not on prime time in a Power Five matchup. Do. Better. ACC.

5) Jose Borregales and Louis Hedley are still awesome. Were it not for Borregales’s incredible accuracy, Miami loses that game. What a luxury both of those guys are, and what a difference their successes have made on this team and this season.

6) Miami at #9 seems right. Glad they got their due from the voters this week. I must say, if Miami got blasted twice in a season like Georgia has this year, they would be nowhere near the 12 spot that Georgia currently occupies. How does that happen? Yeah, SEC bias, I already hear your keyboards pounding that out, but honestly, besides that, I’d love to know how they hang on there. That seems like an absolute sham to me.

7) Prediction: Miami heads to Blacksburg this weekend for a tilt with the Hokies. I watched the end of that Liberty-V Tech game, and that’s as silly/pathetic of an ending as I’ve seen in a long time. After Liberty’s 59-yard FG was blocked and returned for a walkoff TD, it was nullified afterwards because VT coach Justin Fuente called a timeout. Honestly, the ice-the-kicker-thing is now expected and predictable. Want to shake up a kicker? Let him take a swing at the ball wondering if a timeout is coming. That’s the real mental game. But, alas, Fuente didn’t, Liberty went on to win, and now a kicked-in-the-pants Tech team must deal with a rejuvinated Miami squad for what is thankfully a noon kickoff and not a night game. The Hokies somehow opened as a 2-point favorite, so……ok, then.

Anyhow, if Miami’s defense struggles to contain the Tech offense, Miami has another opportunity to stay in the game via shootout. This season, Tech has allowed 24, 31, 56, 23, 35, and 38 points. Last week, Liberty pounded the ball for 249 yards on 50 carries (5 ypc). If Miami can’t replicate that, especially with a far better set of skill position players than Liberty, I will be shocked. Hokie QB Hendon Hooker is a playmaker and worries me, given his abilty to hurt you with his arm or his legs. However, I think Miami will slow the Hokies enough to let the offense take over in the second half. Points aplenty in Blacksburg. Miami 45, Virginia Tech 37.