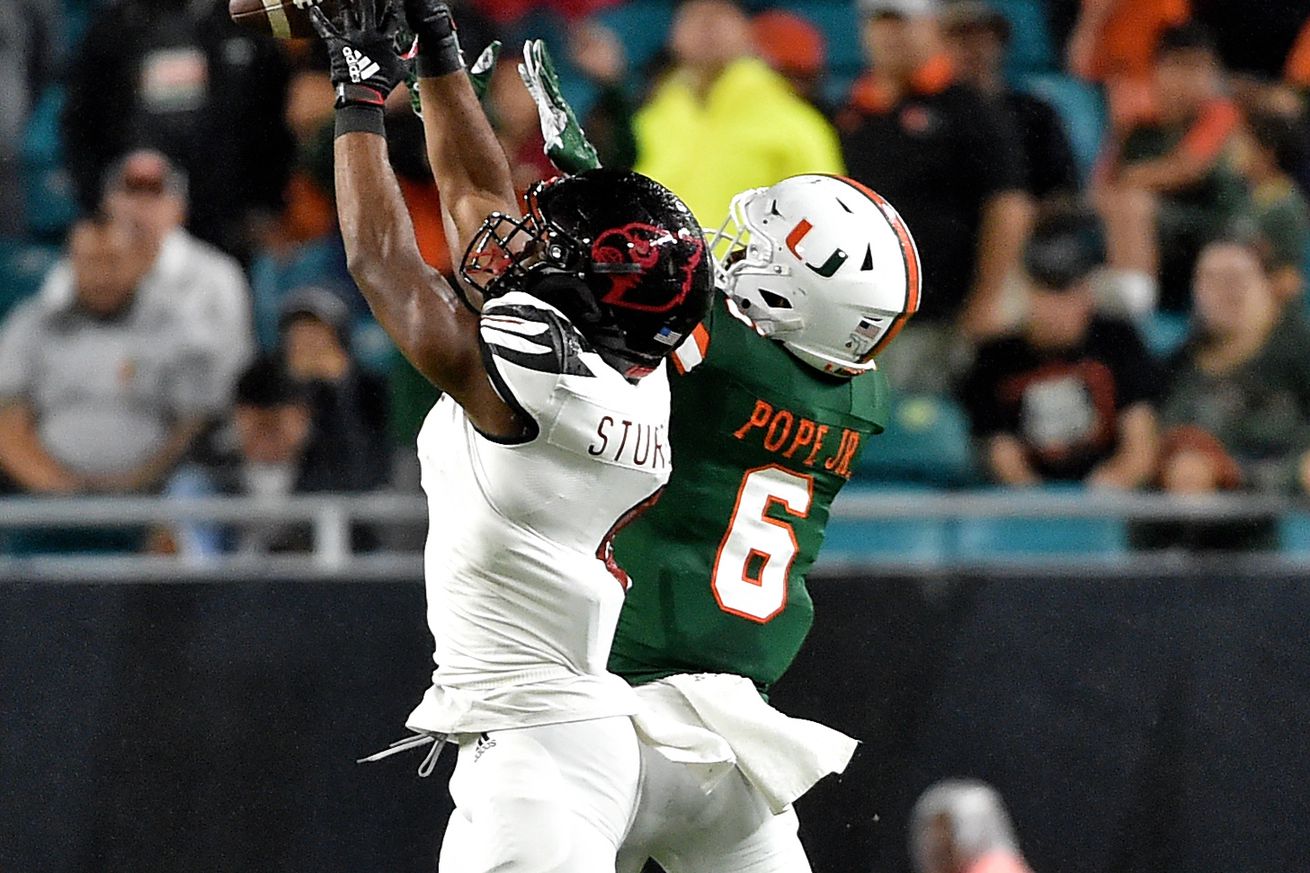 It’s always nice to start a season 1-0. Most good teams in the state of Florida will do that (sup, Tallahassee?). There were obviously plenty of highs and lows in Thursday night’s win. That’s exactly the impression that a 17-point win that – at times – felt like the equivalent of getting a root canal will leave you with. Now for some random thoughts……

1) D’Eriq King. Holy freaking guacamole, Batman. King has the moves like Jagger…. and Michael Jackson, Jamiroquoi, J-Lo, Beyonce, and Bruno Mars, all rolled into one. When he took off, spun out of two tackles, and got the ball down inside the 30 (or at least that’s how I remember it), my jaw hit the floor. I mean, I can’t ever recall seeing a quarterback run that fast since I watched Michael Vick sprinting down the field for the Hokies. I’m sure Lamar Jackson and several others are the same, but my word, that level of dual threat playmaking is something we’ve never seen here, so forgive my brain for freezing up there. He did miss a few throws that would have been a touchdown and/or a big chunk play – the deep ball to Mark Pope and the should-have-been-TD to Payton – but that’s a timing thing that hopefully will get worked out in practice and the next week or two in live action. Absolutely unbelievable playmaking ability. Even better than I had ever hoped for.

2) Speaking of King taking off, it was in no small part to the constant pressure he seemingly faced all game from a UAB front that got in the backfield way more than it should have. While Miami rolled up the rushing yards and eventually starting imposing its will in the running game, the pass protection was subpar, to put it nicely. The offensive line is going to have to do much better in protection as the competition gets better. Fortunately, if there’s a quarterback that can prop up a line having issues in the passing game, there is probably no better quarterback in the entire country than King.

3) But, as I said, props to Miami’s offensive line in developing a push on the ground as the game wore on, as Miami finished with 337 yards rushing at around 6.5 yards per carry. Jarrid Williams settled in nicely, as he and right guard DJ Scaife did a solid job on the right side, including setting a nice hole for Cam Harris to break free for the opening 66-yard touchdown.

4) Harris ran very well, as did Don Chaney Jr. and Jaylan Knighton. What an embarassment of riches in the backfield. Any of these guys could start at the vast majority of Power 5 programs. Hopefully Rhett Lashlee can learn and utilize each of their best attributes going forward. Bravo, fellas.

5) In retrospect, I like the conservative game plan on offense. Sure, it felt like the staff was holding back the playbook, but I’m more than ok with it. They won (and covered) while playing things close to the chest. Hopefully the playbook is opened much more this week.

6) Miami’s defensive line was fantastic. Nesta Silvera was seemingly unstoppable for much of the game. He really helped stop any semblance of an inside running attack from the Blazers. Quincy Roche showed he was worth the hype, getting the first sack of the season. Jaelan Phillips made the most of his largely-expanded frame and high recruiting ranking, getting into the backfield time and again to disrupt the play. Cameron Williams was disruptive at times as well. All in all, a good showing from the front.

7) Bradley Jennings, Jr. played like his hair was on fire, finishing with 6 tackles and 2 tackles for loss. He just gets to the ballcarrier in a flash. I now see what they coaches have been seen in Jennings. Well done, sir.

8) As a result of the win, and the comedic incompetence of two particular Power 5 conferences, Miami found itself on Sunday morning back where it belongs – the Top 25 poll. The Canes sit at 17, one spot ahead of their opponent of Saturday night’s upcoming ABC prime time tilt – Louisville (which the ol’ boys up there apparently pronounce as Loo-Vuhl (yikes)).

9) I was supposed to do a preview of the Louisville game, so, hey, here’s the condensed version. In watching Louisville’s game Saturday against Western Kentucky, what really stuck out to me the most was Louisville’s precision and timing in their passing game. Honestly, it looked like QB Micale Cunningham had had a full offseason of work with his wide receivers. Absolute chef’s-kiss touch on everything. Comeback/timing routes, deep posts, go routes. It was all there, in stride. Scott Satterfield’s offense ran most of their plays from a base pistol formation, with a lot of RPOs and a good bit of play-action short passes to crossing slot receivers. Seemed to be their bread and butter, really. They also set up in a traditional shotgun formation on third and long, and found great success deep, hitting for 48 yards from their own one-yard line in the second quarter. They aren’t afraid to test their opponent deep, as Miami knows from last year. WR Tutu Atwell beat Miami’s secondary for an 80-yard touchdown from Cunningham in last year’s 52-27 Miami win, so Manny Diaz, Blake Baker, and company know just how dangerous this offense can be.

10) As far as defense, the Cardinals’s defense was only mostly responsible for one touchdown drive in Louisville’s 35-21 win over Western Kentucky last week. The Cardinals punter dropped one snap and had another kick blocked, both of which set up Western Kentucky in goal-to-go situations. At first glance, they did not look like the same awful bunch that allowed 440 yards per game last year (102nd in NCAA D-1) and let a struggling Miami offense roll up 52 points. They were more disciplined and swarmed to the ball last Saturday. I’d say that’s really the only way you’re going to stop Miami’s rushing attack, but having a player like King as the other running option could be a game changer for Miami. Knighton and Harris both ran through defenders notably last week, and the edge was there countless times in RPO looks for King. If Louisville tries to target one or the other on early downs to stop the run, it could be a case of pick your poison with Miami’s offense.

11) The Week 2 depth chart was released today, with LG Jakai Clark moving ahead of Ousman Traore as the only major change of note that I saw. Looks like it will still be a case of three co-starters at safety for at least one more week, with Bubba Bolden, Gurvan Hall, and Amari Carter listed as co-starters for another week (Hall listed as co-starter at both safety spots). If it ain’t broke don’t fix it.

12) As far as a game prediction Saturday, my head and my heart are telling me two different things. My head worries about what it saw with Louisville’s multiple and efficient offensive performance. It’s a hard offense to prepare for, because Cunningham can hand off, keep it, hit the crossing slot receiver, hit the running back wide, or go deep. It offers a threat on every level of the defense. And, speaking of defense, the Cards were more sound, in place, and made tackles when they should’ve….all completely the opposite of last year. So, this seems like it could be a true challenge.

My heart reminds me that King is the most dynamic player on the field, that Lashlee hasn’t shown a thing about his offense yet, and that Miami put up 31 points while shooting itself in the foot multiple times against probably a better opponent than Louisville faced. And that Miami can be just as multiple and create their own mismatches in RPO situations and in the middle of the field with Brevin Jordan, which they did last week to set up the touchdown that gave them breathing room. Where Louisville lacks the players to routinely create a huge amount of pressure, Miami does not.

My head says this is a coin flip. My heart says King takes Miami to another level. I’m going with my heart.