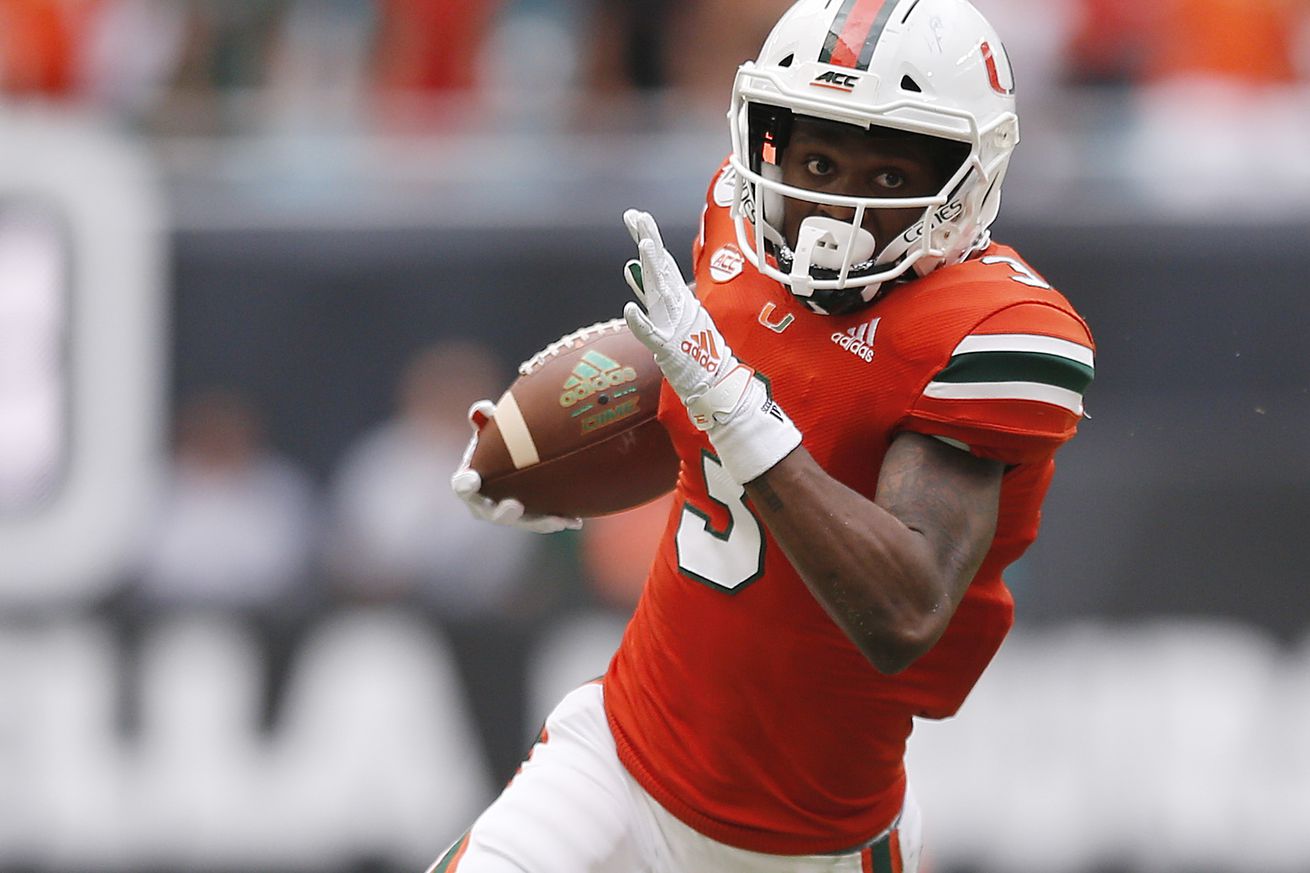 Well, that was something on Saturday. After a couple of days to let a 19-14 win over Virginia sink in, here are the random musings floating around in my head…

1) That was one of the ugliest wins we’ve seen in quite a while. That was…..not a good Virginia team. One that fell 40-23 the previous week against Wake Forest (albeit without their starting QB in that game). I guess what stood out to me the most about the game was what I saw in the trenches. Namely, Miami getting worked at times on both sides of the ball. Miami rushed 48 times for 122 yards, 2.5 ypc. Were it not for a 19-yard D’Eriq King scramble, it would have been uglier. Just not good enough. Cam Harris carried 8 times for 8 yards, after which Jaylon Knighton and Don Chaney took over, but it was far from his fault, especially today. The production from this line, after a red hot start to the season, has faded since Clemson brought Miami back to earth.

2) Part of me wants to freak out and say that, yeah, this winning ugly is going to bite us in the butt when we play on the road against a quality opponent….or if we just take our opponent too lightly, which we’re prone to do. And, well, it might. But, take a step back and look at the record. 5-1, with an expected loss to Clemson. Sitting at #12 in the country. Think back to the first day of this year. 6-7, off the worst string of losses in the program’s history. Ugliness redefined. At that point we would have killed to have a team back in the Top 12, with one loss and a New Years 6 bowl still on the table. So, I will tip my hat to the January 1, 2020 version of myself and say sure, me-from-10-months-ago, I’ll enjoy this for as long as I can. After all, let’s not forget our total futility against Power 5 teams after the 2017 Pitt game. We’re 4-1 in those games this year. I’ll take that. With that in mind……….

3) ………….I’ve played the good cop role in a situation like this before. I remember September 2015. Miami held a 33-10 lead in the 4th quarter against Nebraska. The Cornhuskers scored the next 23 points, forcing overtime. A Corn Elder interception and Michael Badgley field goal avoided an all-time disastrous loss, although the backlash was like a loss on social media. I wrote about Miami starting off at 3-0 and embracing the record and winning despite a recent history of eventual disappointments in the Larry Coker, Randy Shannon, and Al Golden eras. Well, the naysayers were right, in that Miami turtled that next game to Cincinnati and fell off the turnip truck later in the season in horrid losses to Clemson and UNC, the former of which earned Golden his walking papers.

4) I guess my incredibly long-winded point is this: I’m going to take a positive look on this season and this team until I have reason not to. I think this team is built differently in a lot of ways. I think it has a more playmaking player under center than we’ve seen in a very long time – in any of the years of the prior disappointments. I think it has one of the most talented coordinators in the country in Rhett Lashlee. I’m happy with what I’m seeing (for the most part) with the tempo offense. The real question is this: is Manny Diaz ready for prime time as a head coach? Can he prepare his team mentally and game plan wise for success? I should have known in 2015 that I was being overly optimistic, given Golden’s dubious history since 2011. In just his second season, I’m giving Diaz a benefit of the doubt until he shows he’s not capable.

5) Mike Harley was voted the ACC receiver of the week. I’m absolutely happy for him. That was just what this offense needed to get back on track (somewhat), and they certainly don’t win without his productivity Saturday. That being said, I have to admit I’m concerned about what I heard from Harley after the game Saturday. According to Harley, the WR group wasn’t exactly burning up the Greentree practice field like the great’s of old. “We were always taking the shortcuts,” Harley admitted. “We weren’t staying after practice, catching Jugs — we would just do the bare minimum.” I mean, that explains a lot about what we have (or have not) been seeing from the WR corps over the first 6 weeks. Want to. Going to get the ball is focus and desire. Catching the ball and avoiding drops is a result of catching the ball on the practice field over, and over, and over, and over, and over again with your QB and the jugs machine.

“I was like, OK, it’s time now to put the foot on the gas and get the young guys behind me,” Harley said, “and make King have confidence to throw the 50-50 balls.”

That’s what is going to have to happen in order for Miami to avoid an unexpected loss or two this season. Miami’s offensive line is going to disappear, and someone s going to have to have this kind of game on the outside. Can Harley, Wiggins, Pope, or one of the young guys do it when the team needs it in Blacksburg or Winston-Salem? Hopefully this was a true wake up call, and they’ll be ready to answer when their number is called.

6) No pick this week, as we’re on a bye. Enjoy a stress-free Saturday, folks, and have a great week!