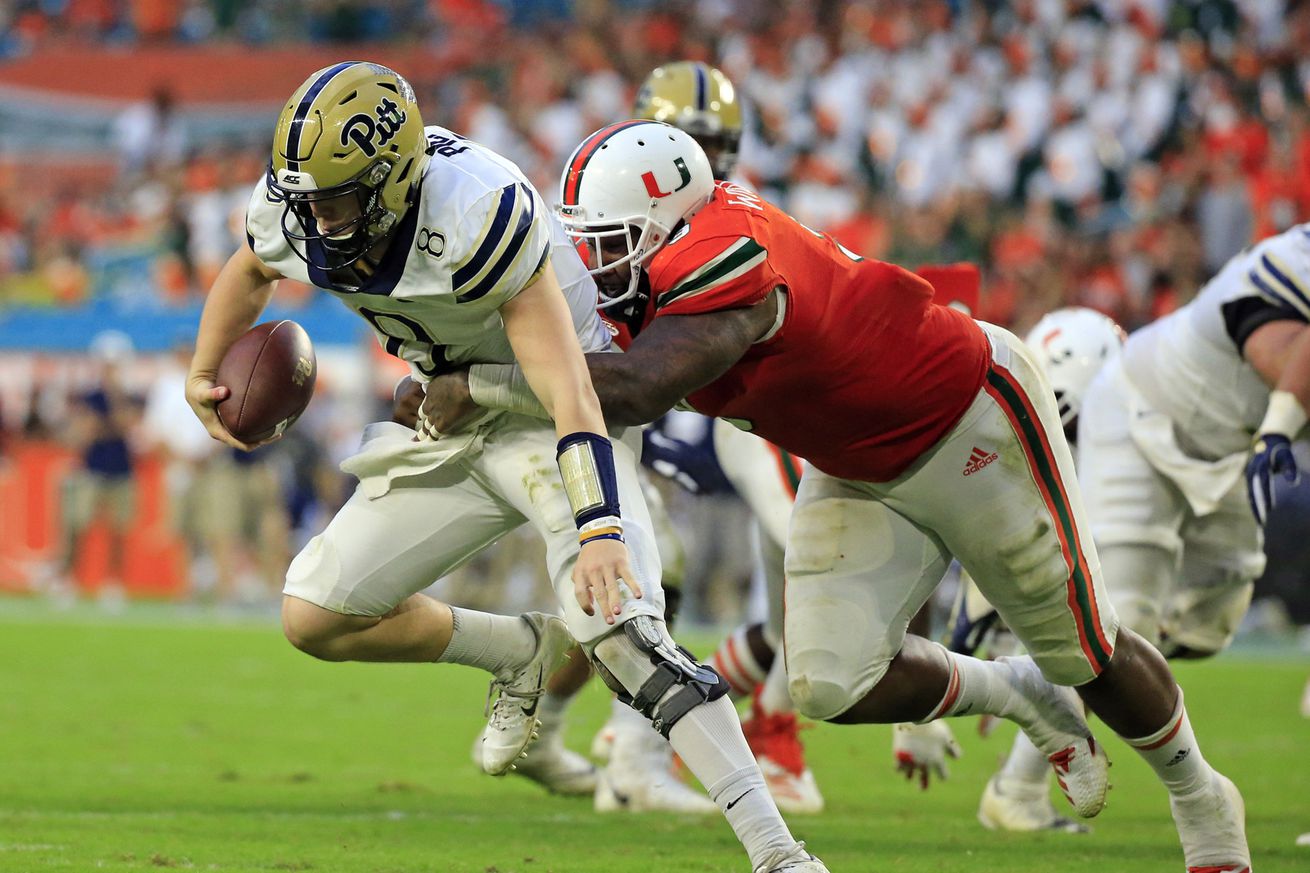 Saturday was a bit of a struggle, albeit not an unexpected one. I called for a close Miami win – 31-27 last week (if I remember correctly) – and that’s what Miami’s fourth win of the season felt like for a good part of the game.

Miami jumped out to a 14-0 lead before going into a back-and-forth of scores with the Panthers and their backup QB Joey Yellin, who was called into action when Kenny Pickett (he who broke our hearts and wrecked our perfect 2017 season) was ruled out with an injury.

I guess my long-winded point is this: Miami won, somewhat comfortably, but their own struggles highlighted how much better this team could have played and really should have played. Miami ran 42 times for 106 yards, or 2.6 ypc. When Miami can’t run, it’s going to look like this offensively, at least until Miami’s WRs and King get on the same page. King completed 16/31 attempts, and for a good while was under 50% passing.

1) Which gets me to my first rambling point: Miami’s outside passing attack is still blah. Clemson completely exposed that issue, putting out a blueprint for how to attack the Miami offense by forcing King to throw outside in one-on-one situations. Pitt’s heralded defense did a nice job of neutralizing Miami’s running attack, as noted before, and keeping King accounted for on third downs. I can remember one long chunk run he had to extend a drive, but otherwise, King didn’t go crazy. He also threw a near pick-six on a deep ball outside the hash, which was returned to the 1-yard line for Pitt’s only touchdown of the day.

2) The reason it worked Saturday was because of Rhett Lashlee’s playcalling savvy….and D’Eriq King recognizing the missed assignments resulted from each respective scheme. Two of the scores (35-yarder to Cam Harris and 45-yarder to Will Mallory) resulted in slipping each receiver out of the backfield and behind the defense. Harris’ score came off a play fake after King almost ducked low and hit a streaking Harris out of the backfield wide open down the middle. Calls that probably don’t get made in prior years with less creative/innovative offensive plan. Mike Harley’s score was also well drawn up, with the inside receiver drawing Harley’s defender away, leaving Harley alone and down the sideline for a score.

3) Once again, I couldn’t possibly be less impressed with our WRs efforts to go up and get the dad gum ball on fades/deep balls. I don’t remember who it was, but there was one throw where, if he had gone back to the ball and tried to high-point it, he would have either caught it or forced the defender to go right through him. That’s the advantage for the offensive player in deep ball situations, being able to go BACK THROUGH the defender and get calls. It’s arguably cheap (well, not really; it’s actually probably a great strategy), but lord, it’s easy enough to do….and we are doing even that horribly.

4) Which is perhaps why a new depth chart was released today, and Manny Diaz listed co-starters for EVERY WR, for each spot. No more starters. Everything to be earned. It’s frustrating to see this at the literal halfway point of your season, but still, I love it. These guys aren’t playing smart football right now, so open up the competition and either give younger guys a better chance to win, or let it serve as a kick in the pants to the upperclassmen. The WR positional group is holding this team back right now, and I’m glad Manny is doing something about it.

Yes, I’m going on and on about the offense, specifically the WRs, but it’s because I’m actually incredibly worried about that area costing us games…

5) …….whereas I have almost no concerns about the defense being the problem. Some are concerned with Blake Baker’s defensive schemes and calls, but I don’t think that’s been the problem. Miami’s front was again active, with some real talent beginning to show across the line. Jared Harrison-Hunte is working himself into a very important member of this defense. I’m loving what I’m seeing from him. Nesta Silvera continues to abuse his blockers routinely from game to game. What a season he’s having so far. Quincy Roche had an ACC defender of the week-type of game Saturday and is moving towards solidifying himself as a first round pick in the 2021 NFL Draft. This line has depth and talent and will be good again for years to come, but lordy…..enjoy this line this season, folks. It’s a tremendous one. Also, Sam Brooks and Corey Flagg continue to prove that a youth movement might not be a bad thing. Those two have been flying to the football lately. Well done, gentlemen.

Also, hat tip to Te’Cory Couch with three pass breakups. Fantastic individual plays. If he can stick like bubble gum to his assignments like that, the sky is the limit going forward. That would be a big plus for the back end of this defense, to put with an already-well-performing bunch. Bravo, Te’Cory.

6) Call Will Mallory “Moses”, because all he does is find the Promised Land. Two catches, two more touchdowns for Mallory on Saturday. Five catches on the year, but three of them have gone for scores. He’s becoming a real factor in the passing game, especially in the end zone. Keep it up, sir.

7) Miami – Virginia prediction. This had better be the bloodbath that I expect it to be. UVA will look to keep Lindell Stone from having to throw 42 times like he did last week against Wake Forest in a 40-23 Wake win. He will have to, as Miami’s front four should shut the door on UVA’s rushing attack that currently averages 158 yards per game. You can’t be one dimensional and beat this defense regularly. Conversely, a UVA defense that just gave up 40 to Wake will struggle to stop Miami’s ground game. They will try to contain King and take out the run, but Miami will wear them down in the second half. Strong defense, ball control, put the game away in the second half. Miami 37, UVA 19.