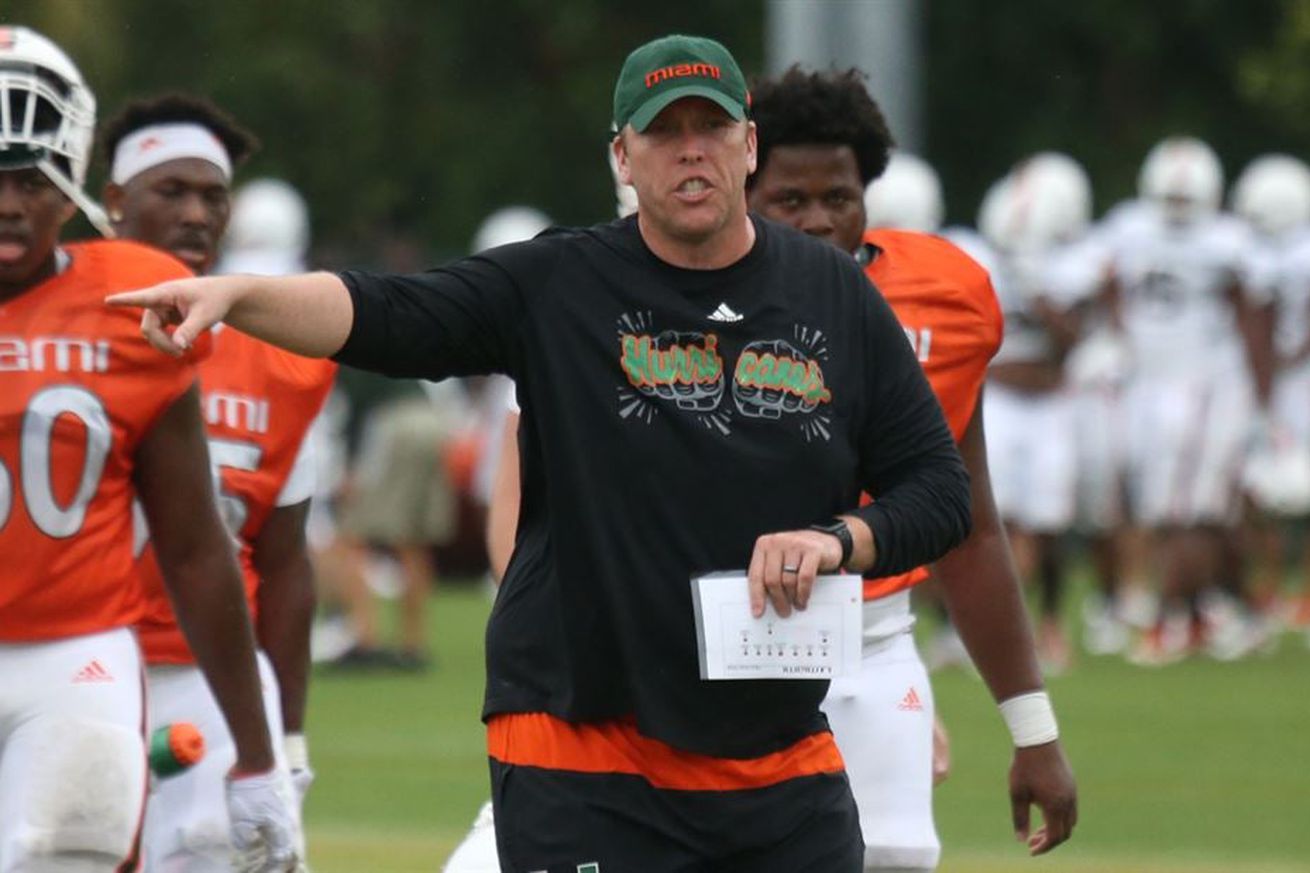 So far, Miami’s hiring of Garin Justice and Rob Likens are working out great

When talking about the Miami Hurricanes this offseason, there’s been so much discussion on the players and Manny Diaz, that I think a lot of people don’t realize two of the biggest moves that UM has made since 2019: hiring Garin Justice and Rob Likens.

So far,
Lashlee, Likens and Justice are home runs https://t.co/gD4zmUPWoF

When the 2019 season ended, nearly the entire offensive coaching staff left Miami, and the program was in search of leaders who could not only develop the players, but help re-create a winning culture within UM.

The first move was hiring new offensive coordinator Rhett Lashlee, and everyone knows how big of a Lashlee fan I am. Though, Miami hit two more home-runs, when they brought along offensive line coach Garin Justice, and wide receivers coach Rob Likens.

I think the hiring of OL coach Garin Justice will end up being of the biggest moves the Canes make in 2020. He’s the kind of guy that UM needs more of. Great hire by Manny and Lashlee

Being a west-coast guy, I knew both guys, with Justice coming from UNLV, and Likens from Arizona State. Still, I wouldn’t be surprised if many Miami fans went to their computer to find out who these two coaches were. Although, when South Florida legend, Larry Blustein tweeted out his approval of the hiring of Justice, that’s all most people needed to hear.

In the months that have followed, Justice and Likens have been embraced by Canes fans, and its players.

I truly believe Miami will have a great year.

The team’s bond is much better. There will be more leaders, on the field this year.
Better coaching with Lashlee (OC/QB), Likens (WR) and Justice (OL).
Great defense.
Much better talent.

First off, the two are very familiar with the spread offense that Lashlee runs. Justice played for, and coached with Rich Rodriguez at West Virginia, and was Lane Kiffin’s OL coach at FAU. Likens spent five seasons with Sonny Dykes at Louisiana Tech and Cal, learning his air-raid offense. Dykes hired Lashlee to come to SMU as OC in 2018, and spent the last two years with Lashlee as offensive coordinator.

Rob Likens met Canes OC Rhett Lashlee through SMU coach Sonny Dykes. Said he reached out to Lashlee and told him, “It’ll be cool to see Miami run the spread.”

Likens shares he was at Temple during Miami’s Big East days. “When I hear The U, it elicits a different response in me.”

Then there’s the factor of what Justice and Likens have been able to accomplish during their time coaching. At FAU, Justice’s offensive line helped pave the way for running back Devin Singletary, who rushed for 1,920 yards in 2017, and the Owls finished that season in the top-10 for points per game (40.6) and rushing (285.3 YPG).

Under OC/OL coach Garin Justice in 2019, UNLV’s offensive line ranked 51st, according to PFF. The Rebels’ run-blocking graded out in the top-25 this past season. pic.twitter.com/Js3VfhLz6V

Over the past three years, Likens has been at Arizona State, first season serving as the Sun Devils WR coach, and then as the offensive coordinator the final two. During the last two years, Likens produced back-to-back first round wide receivers, with N’Keal Harry in 2019 (32nd overall), and most recently Brandon Aiyuk (25th overall) this past draft in April.

All I can say is the Rob Likens coaching hire just really opened eyes. Miami hired him from Arizona State where he just put 2 WRs in the first round in back to back drafts. 2019: N’Keal Harry 2020: Brandon Aiyuk pic.twitter.com/IbUoaNbseX

When he was serving as the passing game coordinator at Cal, Likens helped groom quarterback Jared Goff, who would become the 1st overall pick in the 2016 NFL Draft.

They went to Jared.

The Rams select Cal QB Jared Goff with the first pick in the 2016 NFL draft. pic.twitter.com/PeGZrlMB4W

Moving on, look at what the two have been able to do in recruiting since they’ve arrived in Coral Gables. Starting with Justice, he’s landed 4-star tackle Michael McLaughlin and 3-star center Ryan Rodriguez, two of the top 2021 offensive lineman in South Florida. And if that wasn’t enough, Justice also played a major role in bringing Isaiah Walker and Jarrid Williams to Miami from the transfer portal.

Justice has been here since January, landed two of the top offensive lineman in South Florida. Plus he got Issiah Walker.
Canes fans, we got an absolute stud at OL coach

When speaking to the media back in April, Justice told reporters that a goal of his was to recruit lineman from South Florida, and he’s doing just that.

What Justice has done recruiting in 8 months at UM is more impressive than what Searels/Barry did in 4 years. And it is only June.

Likens has been equally impressive. Since being hired, Likens and Miami has landed verbal commitments from 4-stars Jacolby George and Romello Brinson, as well as 3-star Brashard Smith. Again, all South Florida players.

Romello Brinson is a long, physical WR that can turn a 50/50 jump ball into a 80/20 jump ball. He can also run right by you with his long strides creating plays downfield. Ahmmon Richards was the same type of dynamic WR that could beat you in multiple ways. Likens getting it done pic.twitter.com/513YFwbgYQ

Then when it comes to the players on Greentree, it’s the positivity and optimism surrounding Justice and Likens, that has made me say time and time again throughout the offseason, that this is one of my favorite coaching staffs I’ve seen at Miami. The way they talk about their players and the team, there’s a positive feeling around the program that has been lacking for years.

Rob Likens on Mike Harley: “Love Mike Harley, love his leadership when he walks in the room. … He has some experience, he’s courageous across the middle.”

Make no mistake, they’re no push overs when it comes to coaching their players. Talking with those who attended spring practice, they were quick to point out that Likens and Justice had a loud presence, being critical when they had to be. But also, the coaches were complimenting when their players executed, and they’re always bringing the intensity.

Manny Diaz on energy from players on offense in practice: “They have no choice because of the energy of Lashlee, Justice and Likens.” He added no one is more energetic than Benedick Hyppolite.

The task at hand for both these coaches is no walk in the park. Justice takes over an offensive line that was downright dreadful in 2019, giving up 51 sacks, the most of any Power-5 school. Miami also ranked 120th in rushing offense, averaging just 118.1 yards per game on the ground.

I love the way the guys are working to get better!! https://t.co/5ryElHvdtB

Miami used to be known for producing receivers who were stars in college and then became high-draft choices in the NFL, such as Andre Johnson, Reggie Wayne and Santana Moss. However, UM has had only one WR go in the first round since 2003.

The talent is there for Likens at WR this year, when you look at players like Mark Pope, Mike Harley, Dee Wiggins and Jeremiah Payton, they just need the coach to help develop them into the playmakers they have the potential to be.

Rob Likens on Jeremiah Payton: “His talent level is as good as anybody I’ve ever coached.” Likens includes the first-rounders he has coached with that quote.

I’m not the only one who’s high on Justice and Likens either. College football expert Phil Steele, listed Miami as the most improved team for 2020. One of those reasons, Steele said in his preseason magazine, was the hiring of the two, mentioning Justice’s experience in the spread offense, and Likens time in an air-raid system, along with producing first round NFL Draft picks the last two years.

I love getting to work with these guys everyday at Green Tree
Tim Brogdon pic.twitter.com/XPb30NAkmb

Now I know that Miami has yet to play any games in the 2020 season, but there’s a reason to feel excited about what Justice and Likens can do for this offense, and this program. If the Hurricanes can rattle off some wins this year, the praise for these two will be through the roof.