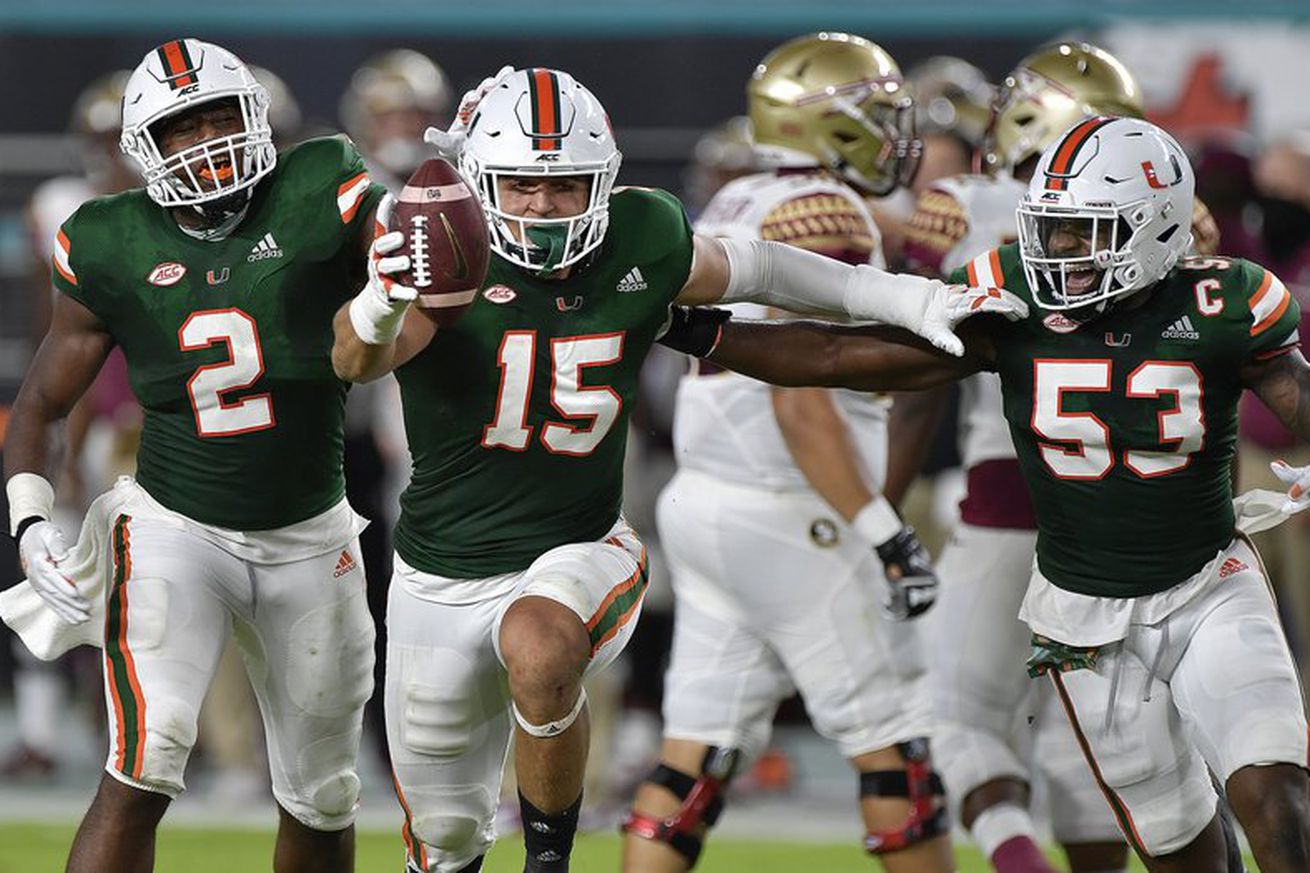 Why The Miami Hurricanes Upperclassmen Can Lead Them to Victory Over A Talented, but Young Clemson Tiger Team

The Smoke Vs. The Hill

Sebastian Vs. The Tiger

Come Saturday, there won’t be a stone unturned between the Miami Hurricanes and Clemson Tigers that hasn’t been compared between the two. The big talk will and should center around the leadership of the teams, as two Heisman contenders in Trevor Lawrence and D’Eriq King square off in the best quarterback matchup of the young season. The best coach not named Nick Saban in Dabo Swinney looks to thwart a rising star in Manny Diaz.

The oohs and aahs the previous matchups elicit are warranted, but every football game we watch, we take for granted the most obvious detail:

Football is a team sport.

Unfortunately it’s true. Against teams like Virginia and FSU, you can get away with sloppy enough play, or singular performances and come away unscathed.

In bigger matchups, against strong teams, under the lights, in primetime. the importance of team takes on a whole new dynamic. One too many penalties can be the deciding factor. Misdiagnosed plays can blow a game wide open.

Thats why age and experience matter most when games like this arise. Unlike 2017, Miami is the much more experienced team.

Where can Miami expect the biggest gaps and possible weaknesses in the age bracket versus Clemson?

Against just about every team in the country this season, Clemson will have the upperhand at the most important position in football. Trevor Lawrence is the prize of college football and the dream many NFL fans hope their teams tank for. The golden locks of Mr. Sunshine paint a scenic picture of the future first overall pick.

If any team has the chance to, at the very least, bring similar excitement and experience, it’s D’Erq King. The redshirt senior has almost two years on the Clemson Tiger, while also being a gamechanger for his team. While both players are adapting to new offensive elements (King’s transfer and Clemson’s change to a much higher pace on offense) King does pose an upperhand having played in pace his entire career. This will be a fun duel for the gunslingers.

This group for both teams is led by future first rounders.

Travis Etienne is as electric as they come in college football while Brevin Jordan for the Hurricanes may be the top all around Tight End in college football. both players are upperclassmen leaders to skills groups that have a mix of age, youth and unfulfilled potential.

Clemson’s running game is still getting it’s footing as there has not been great blocking up front, but Etienne is a cheat code to negate that. Minus Demarkus Bowman, behind Eitenne is a mixed bag of unproven backs.

No surprise, Clemson has strong pedigree with Etienne, but that also extends to the WR position with south Florida product Frank Ladson and Amari Rodgers. Rodgers, in his 4th year, has begun to emerge as Clemson’s top dog in the receiver room while Ladson is coming into his own, featuring five star talent and excellent work ethic. The duo still has much left to prove but should create problems for the secondary. Beyond that Clemson has struggled to get much else from its skill rooms.

The Hurricanes have not had nearly the same issue.

The rushing attacks three headed group of Cam Harris, Don Chaney Jr. and Jaylan Knighton highlight a position in football that favors talent more than experience. The trio along with D’Eriq King are already creeping up on 1,000 yards on the season with 9 rushing touchdowns already through 3 games.

The pass catching group consists of tight ends Brevin Jordan, Wil Mallory and everyone else. Mark Pope and Dee Wiggins pace the receivers, but Michael Redding III has begun to come on and this week marks the return of heralded Jeremiah Payton. The new staff and competition in the locker room has tightened up a group that was spiraling out of control.

Miami has the advantage here due to the experienced depth, which is shocking considering how far this gap was just 3 years ago.

Probably what will amount to the smallest paragraph of this article may turn out to be the most important. Clemson’s offensive line is built to protect the blind side of Lawrence with two JRs, Jackson Carman at tackle and Matt Bockhorst at guard, but after peaking with Redshirt senior Cade Stewart up the middle the right side features a pair of sophomores that require some baby sitting. For having such a manageable slate to begin the season Clemson has struggled to find much room in the run game and have been susceptible to the pass rush up the middle and on the right side.

While the above feels more Miami-ish in whats left to be desired, Miami’s has more Clemson to it with the consistency its featured. Miami features four upperclasmen on the line, headlined by Jarrid Williams and John Campbell Jr. and have done an excellent job limiting the team to just 3 sacks and leading the ACC in rushing.

The biggest difference of the two OLines is the second level of the depth charts. While Miami features solid, rotational depth Clemson has FOUR true freshman behind their starters. Injuries for Clemson must be avoided at all costs.

This is where, more than any other position on either team, experience will be a game changer.

Talent wise, there might WILL not be a more talented ensemble of defensive linemen between Clemson and Miami in any other ACC matchup this year.

Miami features the ACCs best defensive end duo (Quincy Roche and Jaelan Phillips) and room in the ACC. Conversely, Clemson’s Bryan Bresee is only a freshman but may already be the most talented interior lineman in the ACC.

What Miami has on the line that Clemson does not is age and experience. A redshirt senior (Roche), a redshirt junior (Phillips), Senior Jon Ford and Junior Nesta Silvera are an experienced and disruptive group that should show great discipline and IQ. The rotation behind them features Uber talented guys like Jahfari Harvey and Jared Harrison Hunte that keep the level of play consistent when rotating in.

The Tigers are strong but inexperienced up front. With Xavier Thomas not having played as he works back in off the Covid list, Clemson has leaned on true freshmen Myles Murphy and Bruce Bresee, with stand out sophomores Tyler Davis and KJ Henry as the elder statesmen on the line.

This is where it gets dicey for Miami. The anchor of the age dynamic and LB core is Zach McCloud as the fifth year senior. After that, while many backers have the age, not many have the experience. Clemson may very well be able to gut Miami in the running game and passing across the middle of the linebackers are not disciplined. Gil Frierson has had the highest grade out of the striker and will be depended on to not allow a dink and dunk bloodbath of crossing routes and wheels. If it’s at all possible with Clemson lacking size at RB a faster package of linebackers for this game could go a long way in keeping Clemson in front of the Canes defense.

Clemson has a similar, “Who else?” Situation at linebacker. With all world Isaiah Simmons now with the Arizona Cardinals, returning fifth year senior James Skalski is who else. A tackling machine and the leader of the defense, he should be on the field often to lead a group of backers that have about as much experience as Miami’s. While the starters are Mike Jones (WHO?) and Braylon Spector alongside Skalski, expect a rotation similar to what the Canes trot out. Also enjoying backers that can be versatile, what Miami sees in the middle of the field may have an eerily similar feel to Greentree.

Well actually 3. That’s how many starters Clemson is replacing in its secondary. If there is anything we learn however, it’s that Clemson doesn’t replace it reloads. It quite frankly that’s great when we talk TALENT, but experience is king in these matchups. Facing a vet with a new bag of toys in King, the new starting trio of Nolan Turner, Lannden Zanders (Safeties) and Sheridan Jones (Corner) will have a steep learning curve Saturday.

After watching the game vs Virginia, issues with tackling, 50/50 balls and quick routes raise concern for Clemsons defense. This reeks of Dee Wiggins splitting the safeties and the tight ends having a field day. They do have a great ability to make plays, so being smart with the ball willl, duh, be important.

Strange to say it but Miami just has the better secondary, plain and simple. Led by ACC best Al Blades, the lanky defensive backs along with DJ Ivey, Jim Thorpe watch lister Bubba Bolden and Gurvan Hall feature a great group of smart, good tackling backs that will get dirty and love to compete. The big matchups will be between Rodgers/Blades and Bolden/Lawrence, with the latter two playing chess the majority of the game. If Bolden has a game so will the Canes.

If the past few years of special teams fiascos have taught us anything, it’s that kickers and punters are people too. Very, important, game changing people. Both the Canes and Clemson feature perfect kickers with big legs (B.T. Spotter / Jose Borregales) and senior punters (Will Spiers / Lou Hedley) that are good at what they do, and do it consistently. There shouldn’t be any dramatics here (and now there will be.

If age really were nothing but a number then Clemson would have had less trouble with Wake Forest and Virginia. If it really were nothing but a number Miami probably has a tougher time out of the gate, even with the soft starting schedule. But it seems as though Miami is catching Clemson at the right time. They are still breaking in new players, who will get their first big test Saturday. Miami has Impact players, red shirt seniors and double digit starts at the most important positions in football (quarterback, defensive end, tackle, defensive back).

It all seems too perfect, which very well could mean they end up in a dog fight or worse.

It is the maturity, however, that Miami can flaunt now which has kept it from reaching better heights and stronger levels of consistency, until now.

As I lean towards a Miami victory (take the points and run), with the new offense, and the upgraded talent, it’s mostly because it feels like they are old enough for us to trust them to take our hearts for a spin and not crash it.